I bought a Groupon for the Warrior Room here in Portland. It’s a kettlebell gym and the reason I signed up for it was because I know my form isn’t great and I really want to improve that. A friend had also recommended I try it out because she knew the people. 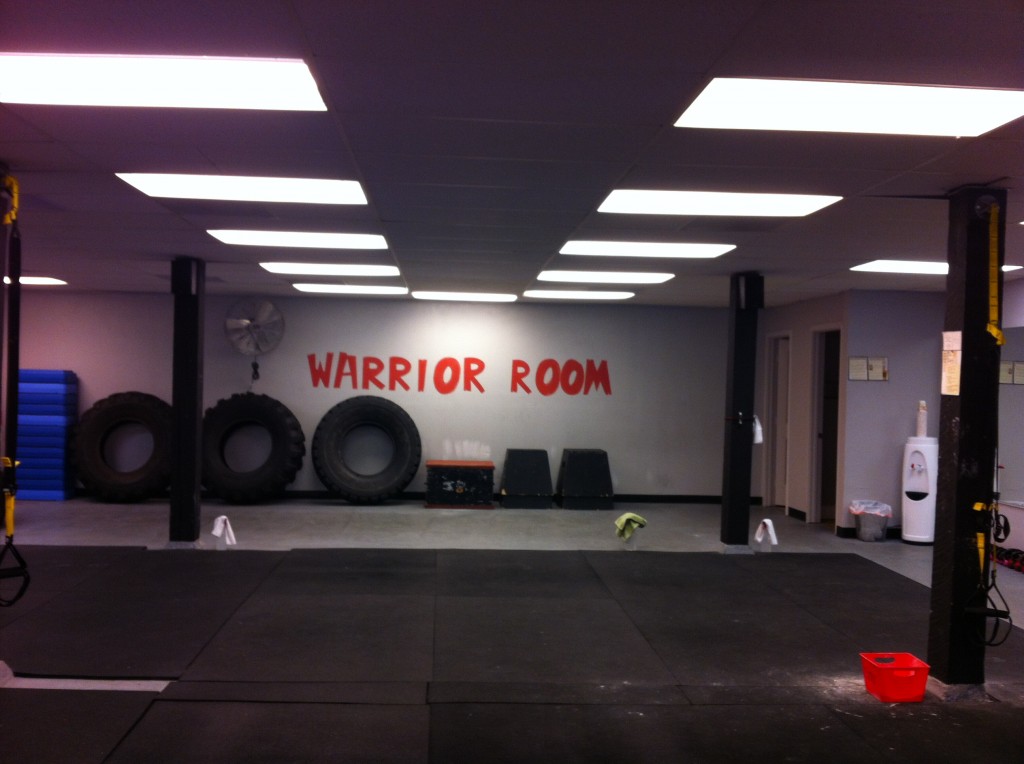 The first time I went was on the Veteran’s Day holiday because I needed to take the “Fundamentals” class first and the schedule wasn’t really working for me. That’s my biggest issue with a lot of these types of gyms–the classes are never at the time I can get there with work, etc. I went to the class thinking it would be a tutorial but it was a full-on workout that kicked my butt. 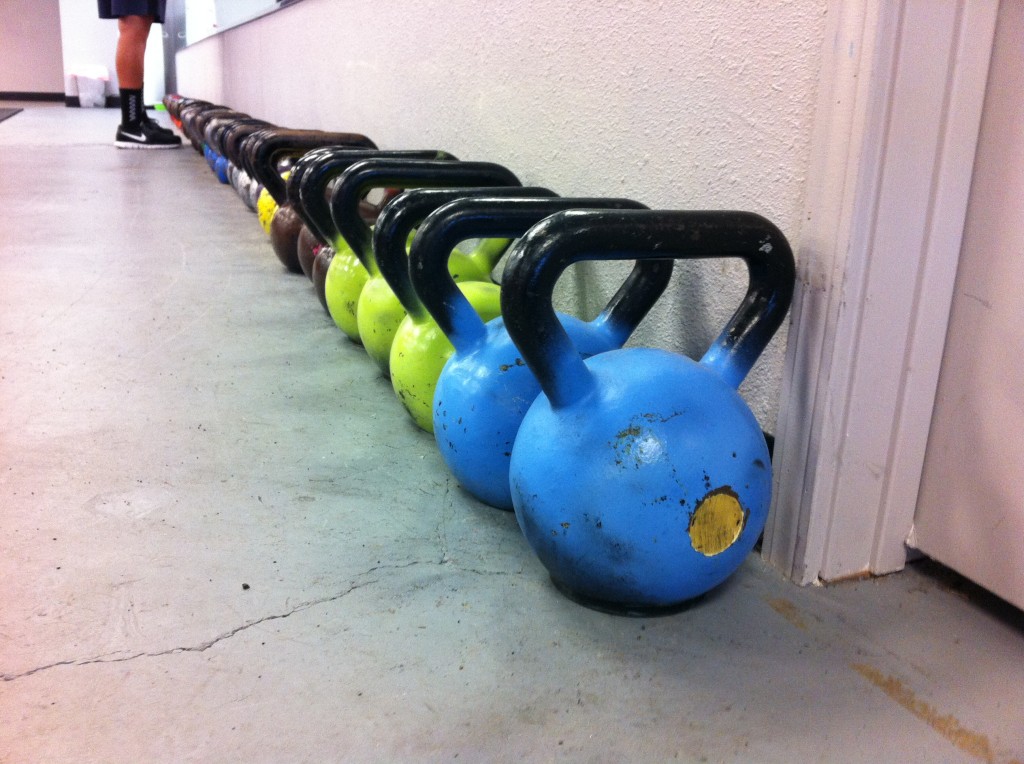 It was basically Crossfit. I will admit that I was disappointed. I wasn’t looking for a Crossfit class. I wanted to learn the proper form for kettlebells so it could be something I can incorporate into my normal workouts without fearing injury. The hip tilt and snap are just something I cannot get! I don’t know why. The teacher was super awesome and worked with me individually to learn the form. She gave me a few different tricks for practicing at home.

The workout itself was an ass-kicker for sure. I was out of breathe, getting fatigued but I modified a lot of things in consideration for my knees. I wasn’t going to push it too soon and end up crippled. Still, check out my numbers: 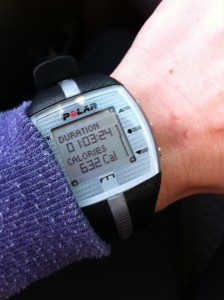 It was a circuit type workout. Lots of squats, sumo squats, jumping jacks with thrusting the kettlebells above the head, running around the block, burpees, high knee jumps, side-steps, Russian Twist, push-ups, crunches…It was a whole lot of hard work!

I knew I was going to be sore the next day and I was. Surprisingly, it wasn’t my quads and hamstrings like I thought it would be. That’s usually where I’m sore! Instead, it was my triceps, abs and calves! My calves were SO TIGHT. Ouch ouch.

A week later I went to my next class. This time I signed up for the “Isolation” class. We warmed up with some jumping jacks, squats and push ups and then got started with the kettlebells. I was trying my best to keep up so I don’t remember all the moves we did. This workout was mostly upper body.

We did four sets of the workout: chest press, fly, rear fly, bicep curls and then the kettlebell press. You can see pictures of the press here. My shoulders and arms were burning! There was another set of four that included squats and lunges and side lunges. Since lunges are kind of a no-no for me (knees), the instructor, Ashley, had me do something different with the TRX for obliques. It was sort of like this video. I also did deadlifts instead of the lunges.

The class was small and intimate. I really liked it and the camaraderie of the group. There wasn’t any snobbiness or elitism. Everyone worked at their own pace, doing the amount of weight appropriate for them and no one was judging. 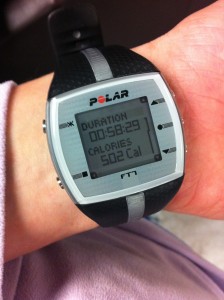 I woke up the next day sore in my shoulders, upper back and lower back.

I wasn’t sure what to expect with this type of class but I have to say I enjoyed it. We alternated tabata workouts with isolation workouts. Tabata  is like HIIT–basically doing intervals/bursts of cardio then resting.

We did that set 3 times, rested and then did the tabata which meant the workout was PUSH IT REALLY HARD for 20 seconds, rest 10 seconds, then do it again. An example of the tabata workout was an overhead press with the heaviest kettlebell we could hold–even if we only pressed once, the point was to do something out of our comfort zone. 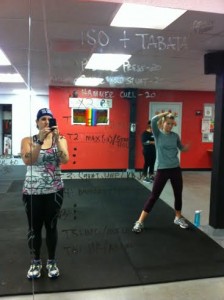 Another isolation set was chest press, pushups and then hammer curls. Boy oh boy was I struggling! I don’t know why–maybe it was the combination of workout types, but around the 35 minute mark I was hitting the wall and those pushups were near impossible for me to do! 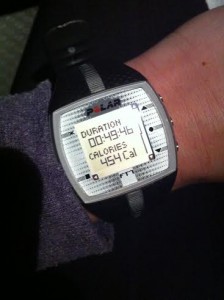 I liked the variety of this style of workout. The tabata training was FUN, HARD and different. And in some ways it was easier because you knew you only had to do the workout for 20 seconds then you could rest.

The Fourth Class – The “Warrior Workout”

I didn’t know what to expect with this workout. There wasn’t really a description online, so all I new was that it was a 90 minute class instead of 60. The class was packed when I got there. It turned out that it was a lot more like crossfit and we were working with partners.

The partner workout meant that for 20-30 seconds one partner would do the kettlebell swing and the other would do mountain-climbers, and then we’d rest for a few seconds and switch. There were 2-4 rounds of each workout depending on what we were doing. It was pretty fun doing the workout that way.

Then they split us into two groups. One group was doing a certain kind of kettlebell workout (the more advanced people) and then my group of “beginners” was doing the simpler workout. Basically, learning the proper form of the various moves. It was nice that they did this because I really wanted to get some tips on my kettlebell form. This gave me the opportunity to work directly with a trainer that was watching all of us and then she’d give me some pointers and I’d get to practice what she said. I appreciated this part of the workout!

Then the two groups did a competition. We all had to do wall squats as one team member from each team ran to the center of the room where the TRX straps were set up and do either the “lawnmower” or a row. The lawnmower was FUN!! I will try to incorporate this one into my regular gym sessions. So each team member would run up there and do 12 reps, then run back to the wall. I liked this a lot!

Now we get to the part I was not a fan of: the “Snake run.” The two teams went outside for a run in opposite directions. The snake run was where we all ran in a single line and the person in the very back of the line would sprint to the front of the line and then set the pace for the group and then the new back of the line person would do the same. I didn’t like this because obviously I’m a little nervous about pushing it too much with knees and running. Sprinting is definitely not what I’m doing YET. It also made me anxious because I was so much slower than everyone else. Even the pregnant lady in front of me! It was too much pressure! I hate organized sports and competitive things like this. I am so not competitive! 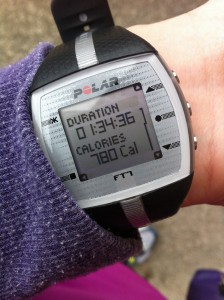 Despite that, the class was pretty good and I had fun. I liked the sense of community in the class. That was a nice change from the solo gym sessions I do!

I have four more sessions left on my groupon deal for the Warrior Room. Michael recently bought one and so did my friend Debby and they are going to join me for some of the classes. I’ll write another post on those workouts and the results I see when I’m done. Overall, I’m really enjoying the Warrior Room. It’s a step out of the norm and gives me good ideas for other workouts on my own. If I could afford it, I’d buy a membership!
Stay tuned for the follow-up…