This is the finale of my Hawaii trip and of the posts. I hope you guys enjoyed the photos I shared with you. I was so happy to be in a beautiful environment where I could practice my skills with my (fairly) new camera.

The last day of our trip, I woke up early and went for a final swim (and my first swim in the condo’s pool). Then I cleaned up and finished the last minute packing (had a turkey sandwich for breakfast to help clean out the last bits in the fridge) and we checked out. Michael and I weren’t flying out of Kona until 7pm that night, so we dropped off our friends that morning at the airport, hugged them goodbye as they caught their early flight and then we had the rest of the day to do whatever we wanted. 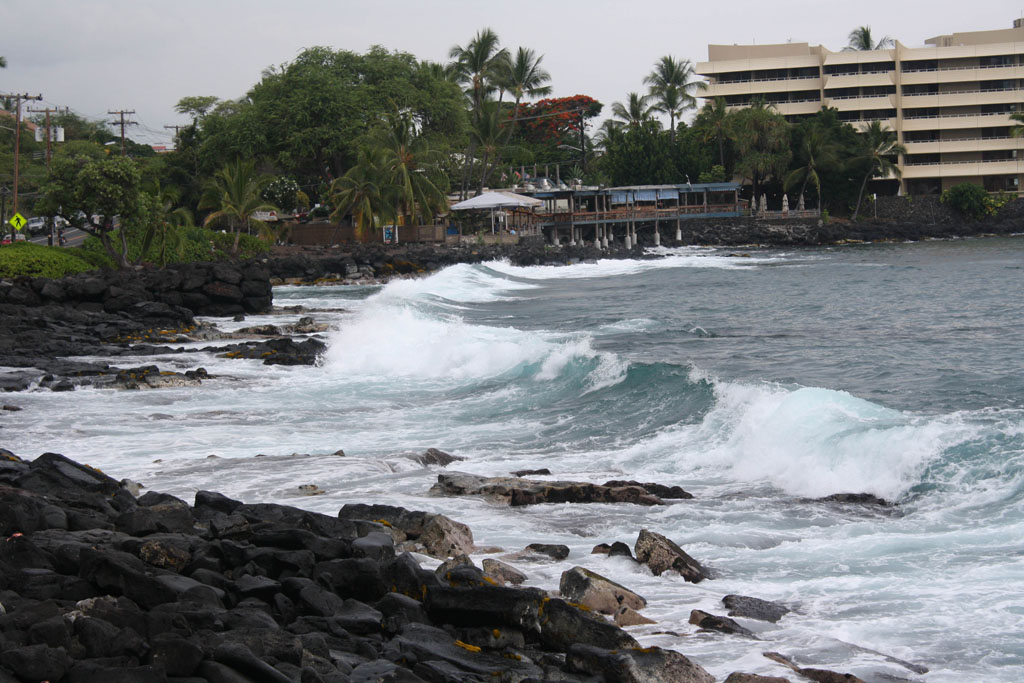 The first thing we did was stop briefly at the marina to see if there was anything picture-worthy to see. It was pretty but nothing special so we moved on to the next stop: The Paleaku Gardens Peace Sanctuary. This garden turned out to be one of the absolute highlights of the trip. I’d probably rank it #3 behind swimming in the ocean and Da Poke Shack. 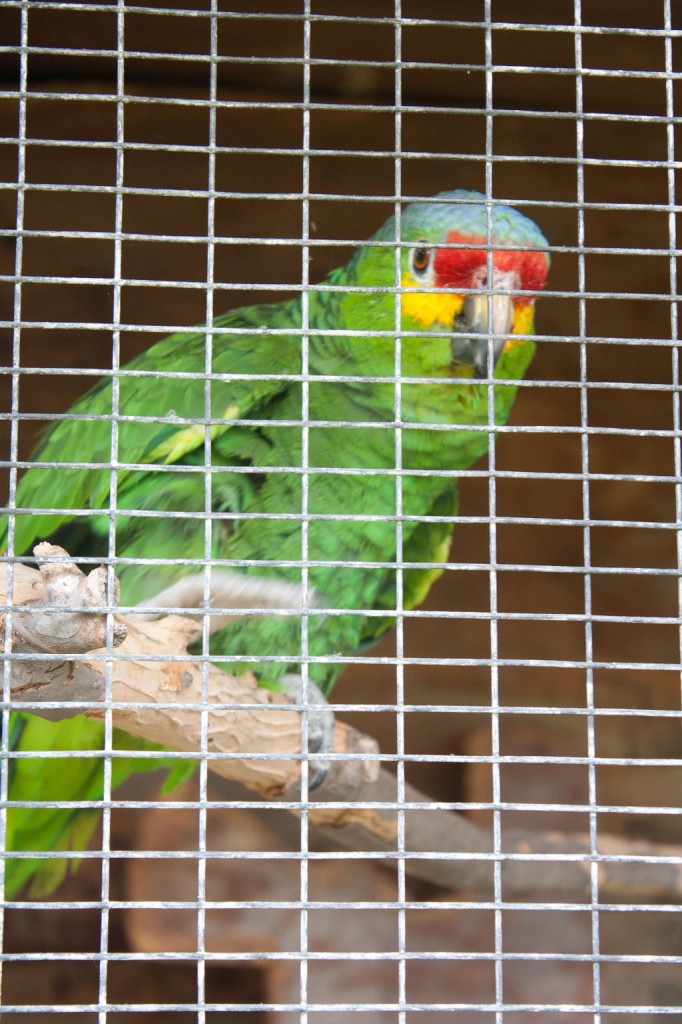 It was about a 35 minute drive from Kona and back in the region near Manini Beach (aka Jurassic Park area). The place was quiet and peaceful and it only cost $5 to get in–a steal. He should be charging about $10 a person, that’s how wonderful the place is. Michael and I were given a map of the heart-shaped gardens and set off on the self-guided tour. 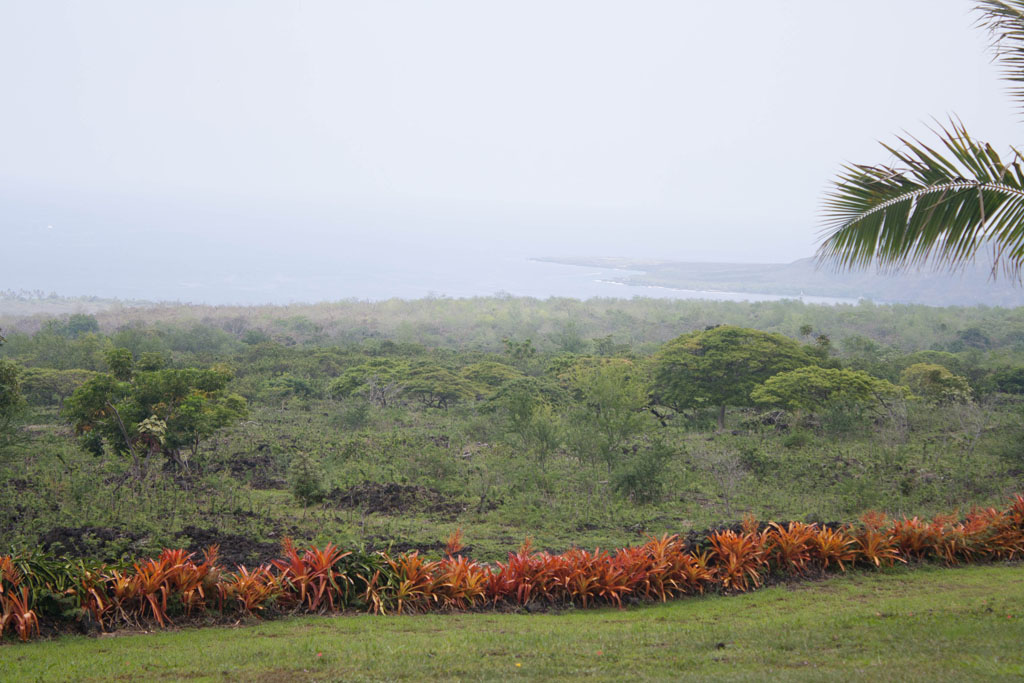 The gardens were devoted to the world’s religions. There was a room with Buddhist sand mandalas (beautiful but the photos didn’t turn out) and then the bulk of the religious gardens were outside. I loved the labyrinth: 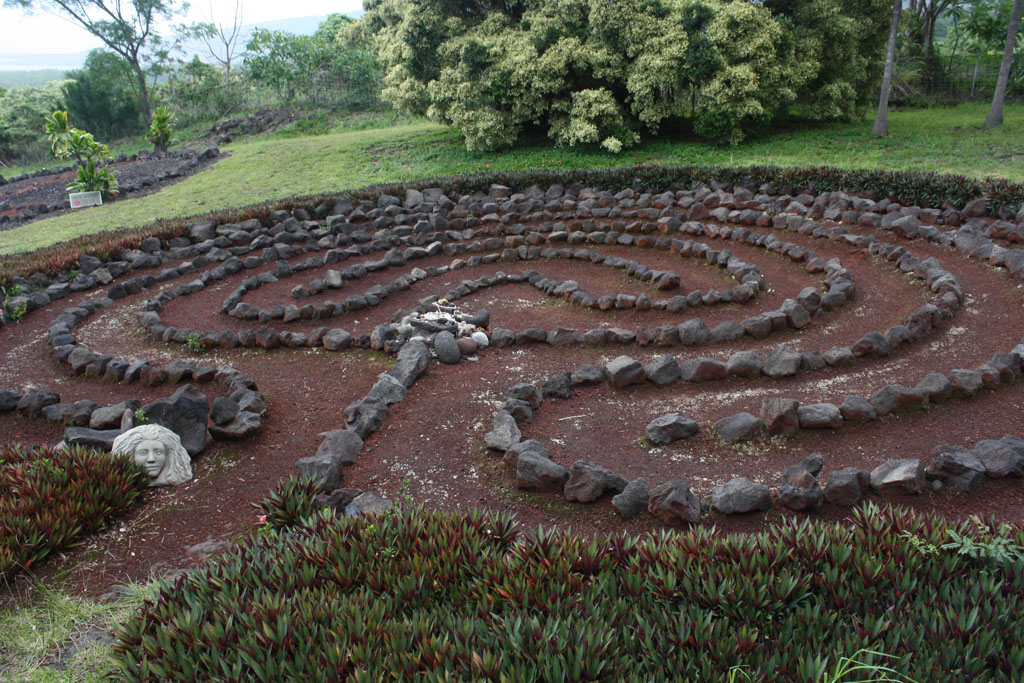 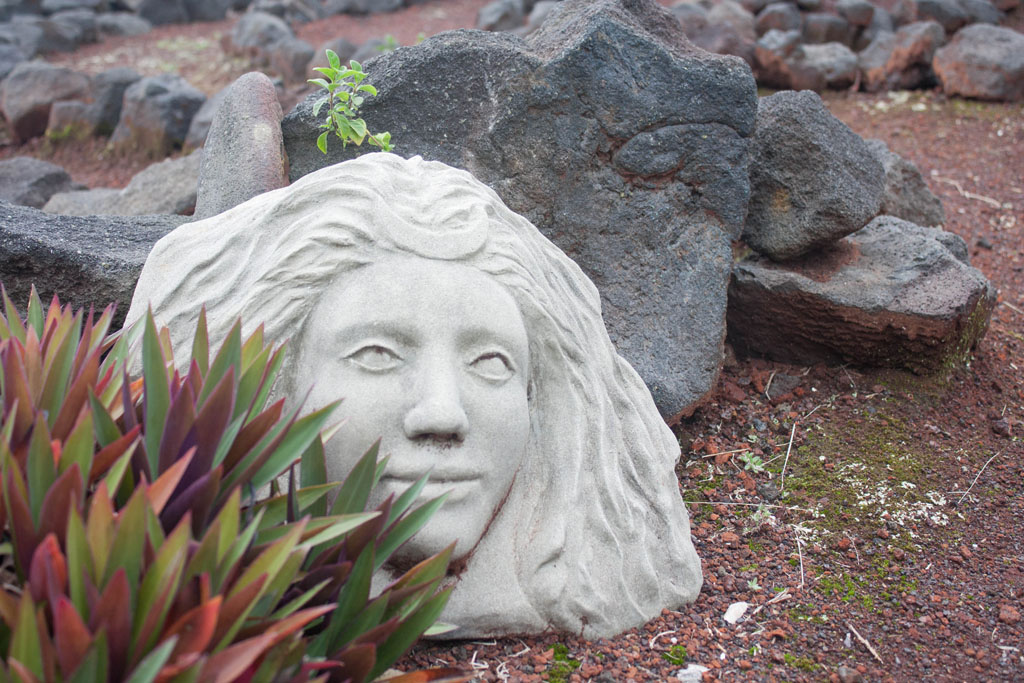 There was a Native American Medicine Wheel, a Jewish Tree of Life, Hindu shrines, a Bodhi Tree, Christian and Islamic shrines and gorgeous flowers everywhere. 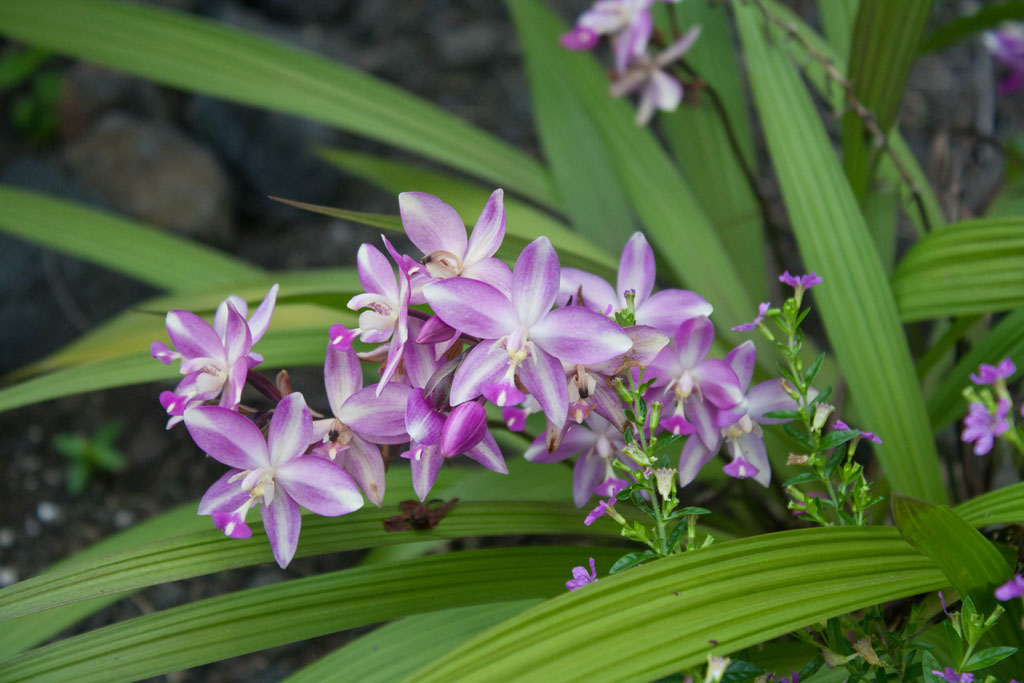 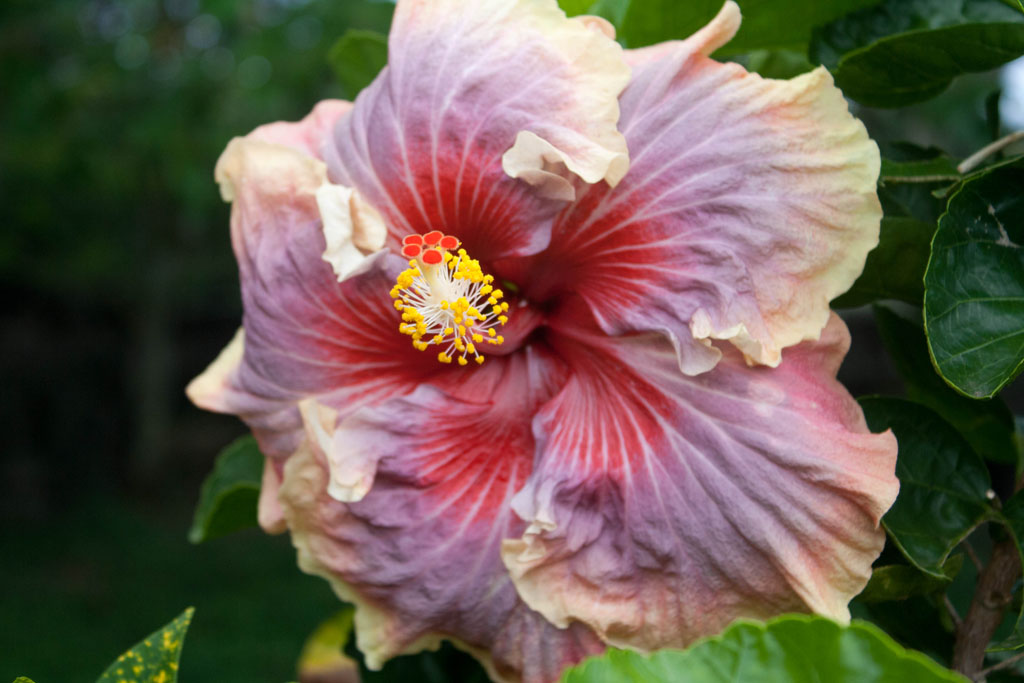 Isn’t that beautiful? The flowers were breathtaking and the scenery surrounding us made me wish we weren’t leaving. I wish I could plant some of these pretty flowers in my garden, but something tells me they wouldn’t like freezing Oregon. 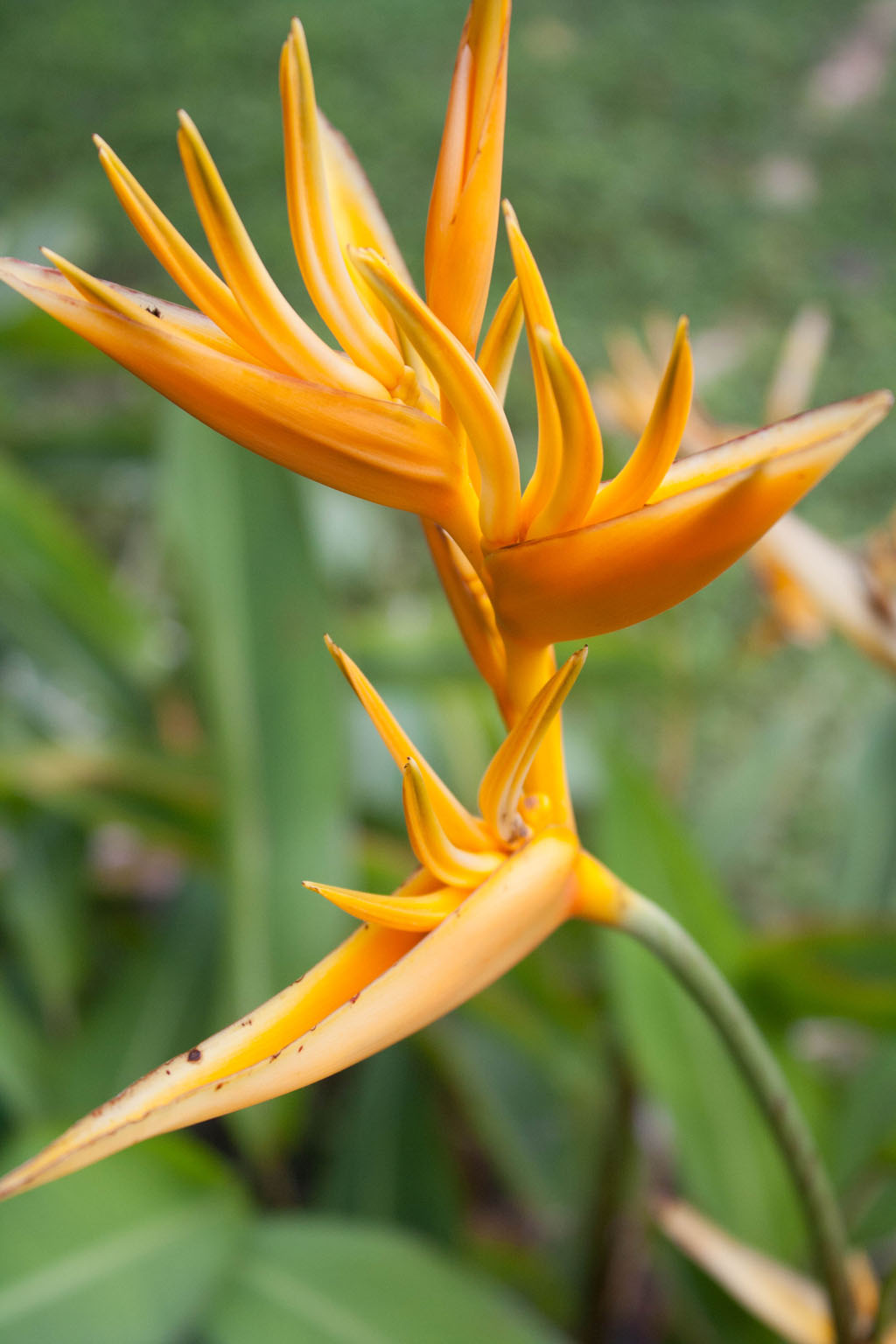 There was one other family there exploring the gardens while we were there. She had some pre-teen sons and they remarked at how great the sanctuary was (that must mean a lot for pre-teen boys!). 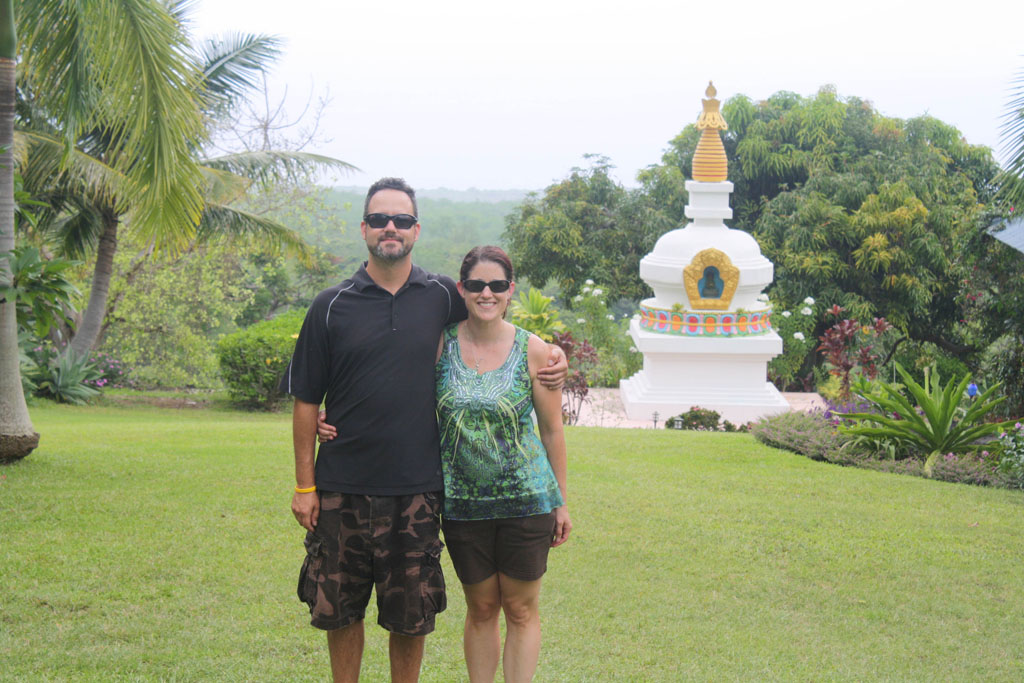 She kindly took a photo of us. 🙂 There was also a garden created as a replica of the Galaxy. It sounded weird at first, but it was cool. 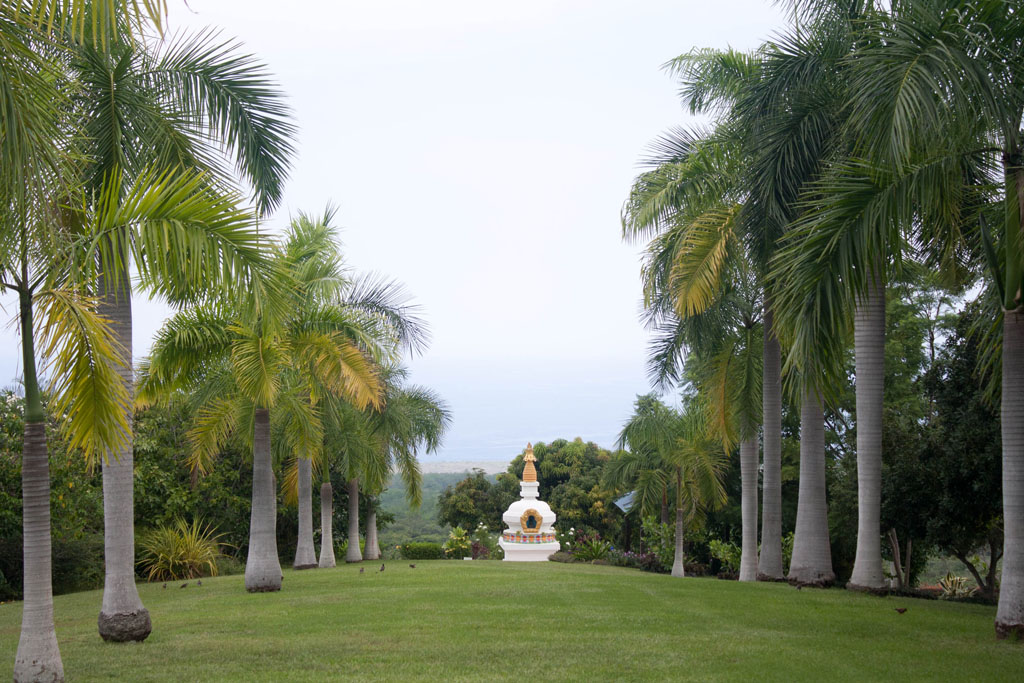 Sadly, the day was getting away from us and we had to leave the Sanctuary. I could have spent hours there. They also had yoga classes offered. It sounded like a cool place to do yoga. Can you imagine having this view while you pose? The Sanctuary was also where I got my best gecko photos! 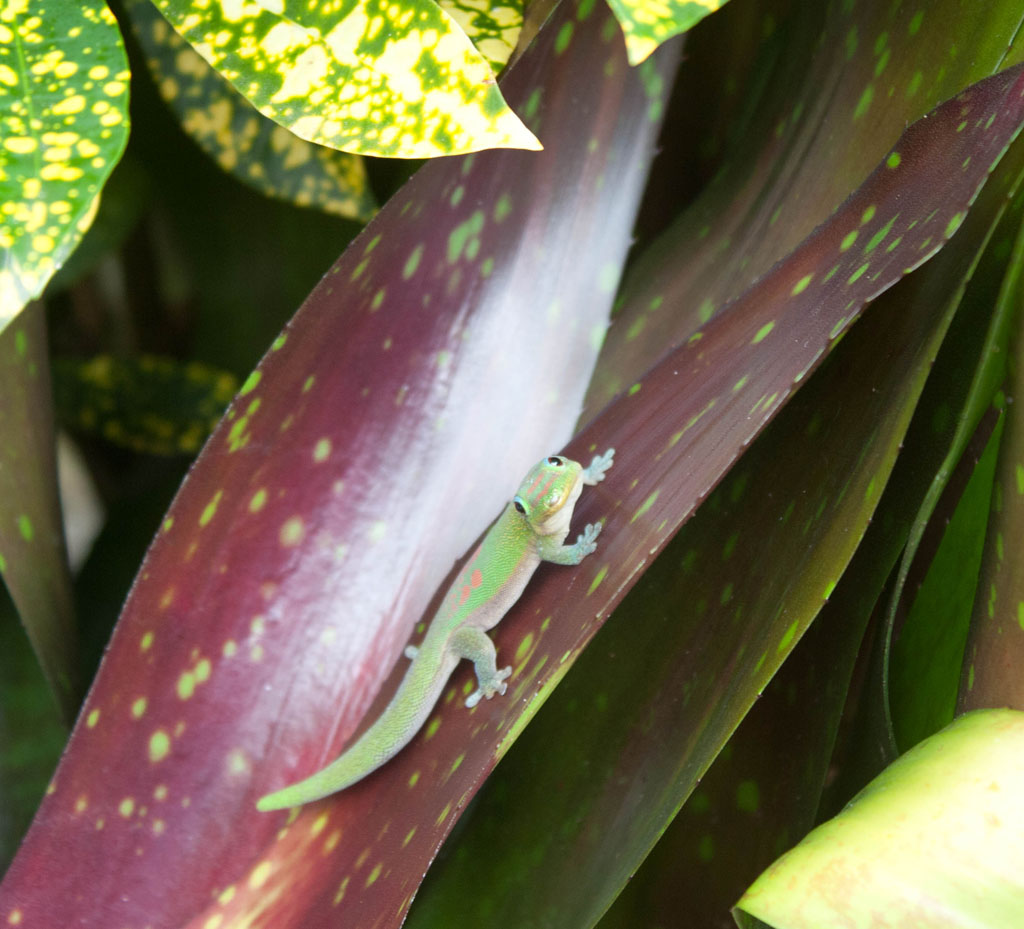 That little gecko turned and looked at me while I was trying to take his photo! We left, grateful that we stopped at the Sanctuary and experienced it, and then stopped briefly at the nearby Painted Church. It was an old church with an even older cemetery. 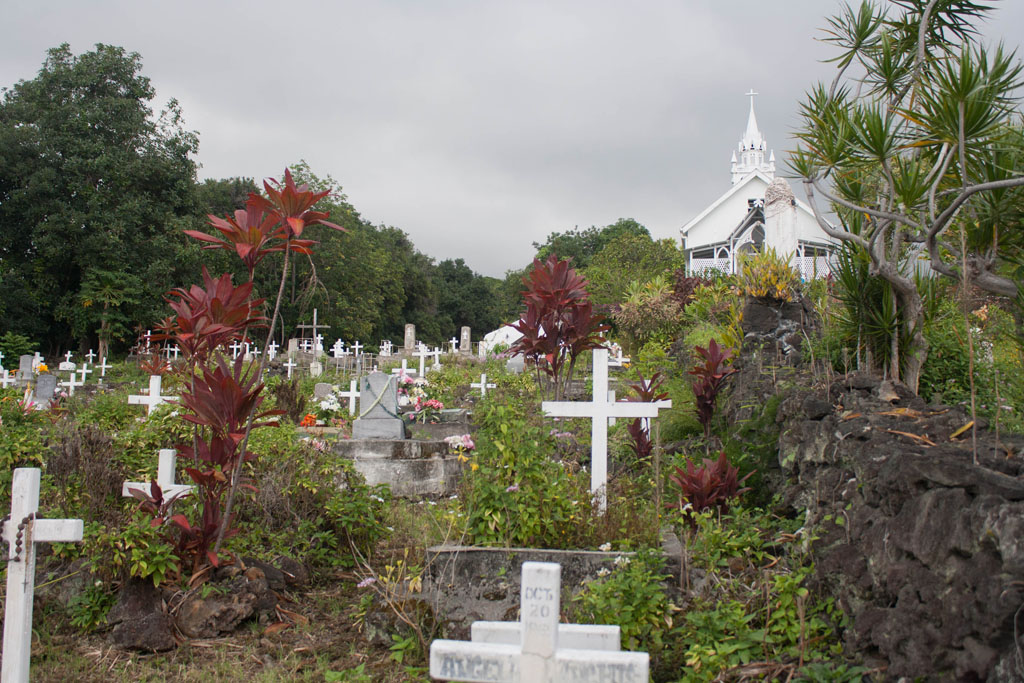 We left that little piece of paradise and drove back to Kona in search of lunch. My only goal that I had yet to fulfill in Kona (besides parasailing or hiking a waterfall) was to have a pina colada. 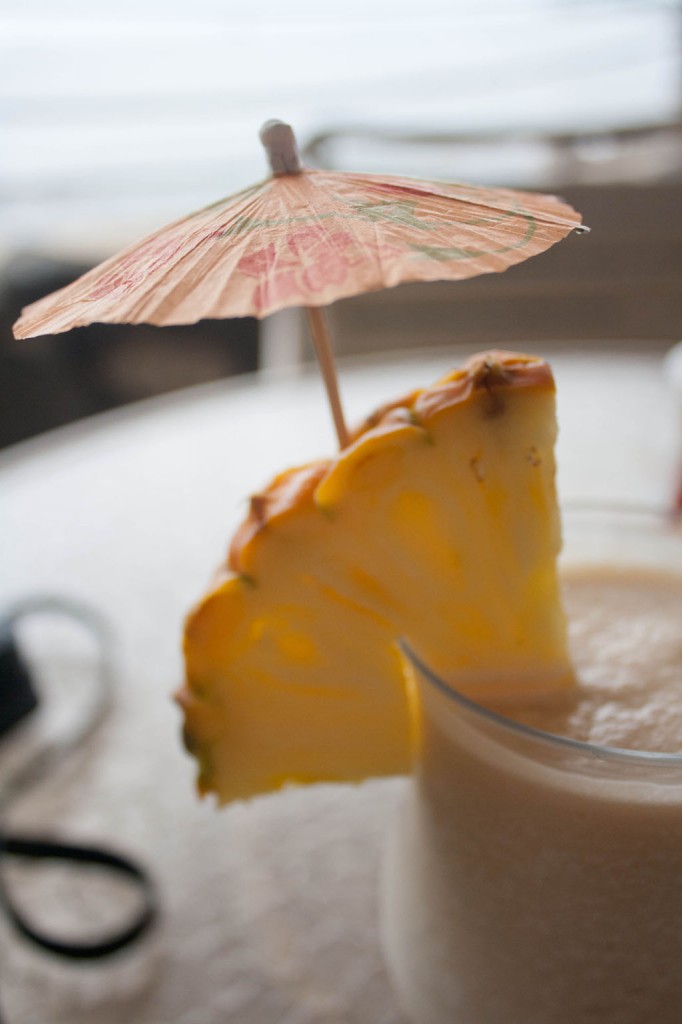 We decided to have lunch at Huggo’s On The Rocks. Our friends went there before we got to the island and liked it. While the service was good and the food was okay, you are certainly paying for atmosphere here not quality. There was nothing really spectacular about the food and I don’t think there was any alcohol in my pina colada. 😛 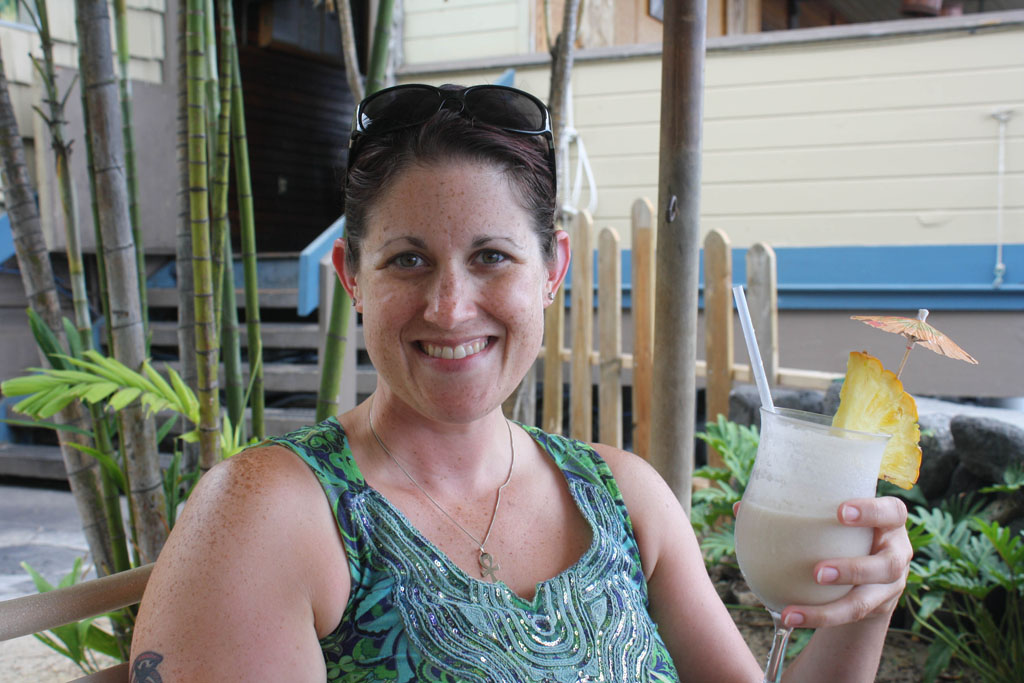 It was still a tasty Island beverage! Michael ordered the nachos and they were decent. They would have been much better had they been prepared with real cheese instead of a Cheeeeze-like substance. 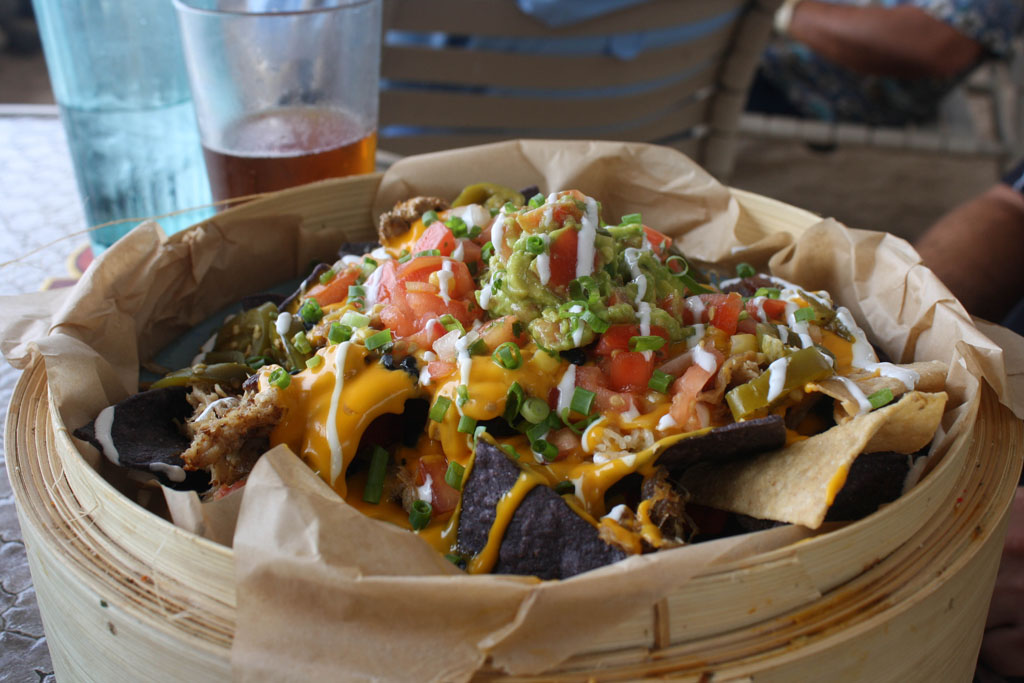 I ordered the Kahlua pork sandwich. Since my trip started with amazing Kalua pork, I thought it fitting to end it with it as well. Unfortunately, the sandwich fell a little flat for me. It was too big to eat as a sandwich and way too messy so I finally gave up and tossed the bread aside and ate the pork with my fork. There was nothing especially spectacular about this pork and I was kind of disappointed. 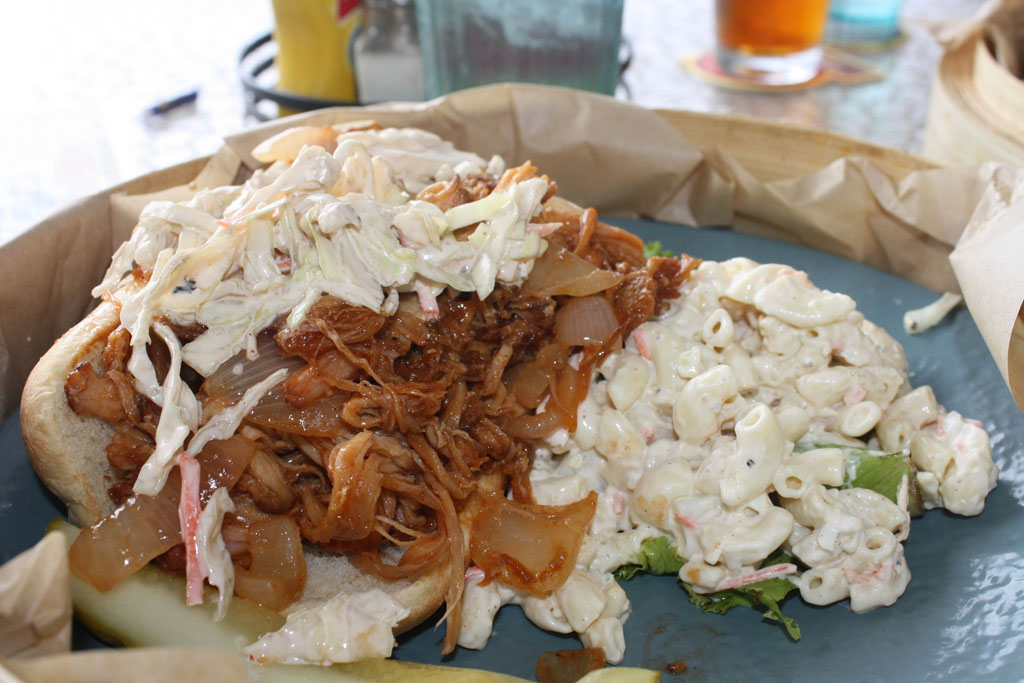 We finished lunch and enjoyed the view just a little bit longer. 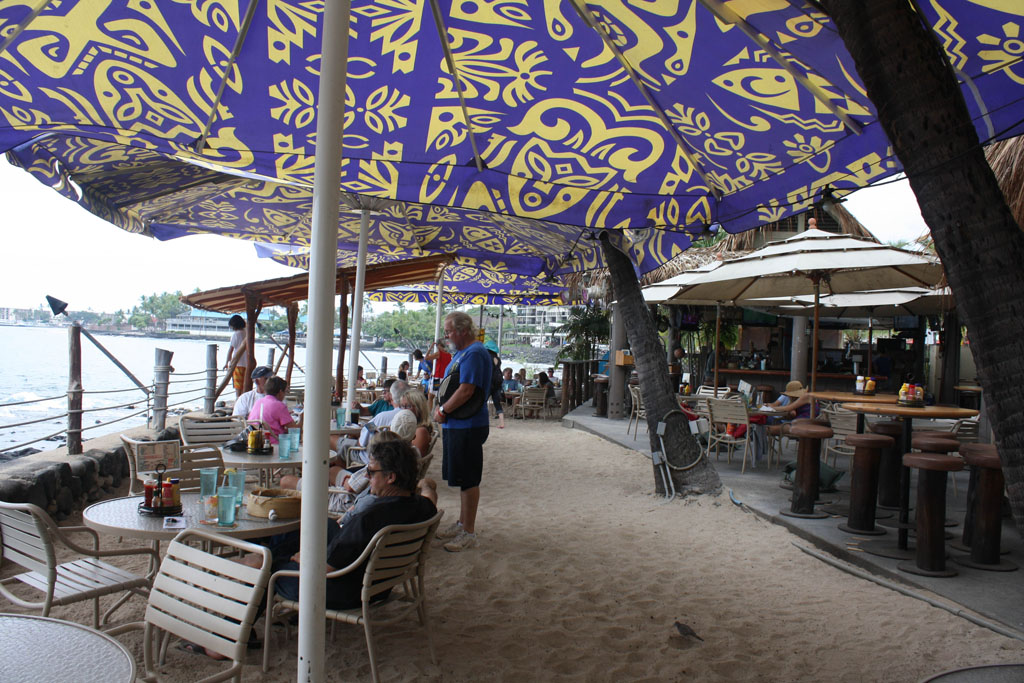 After lunch, Michael and I walked around the touristy part of town to get last minute souvenirs and gifts for some friends and to look around at things we missed. 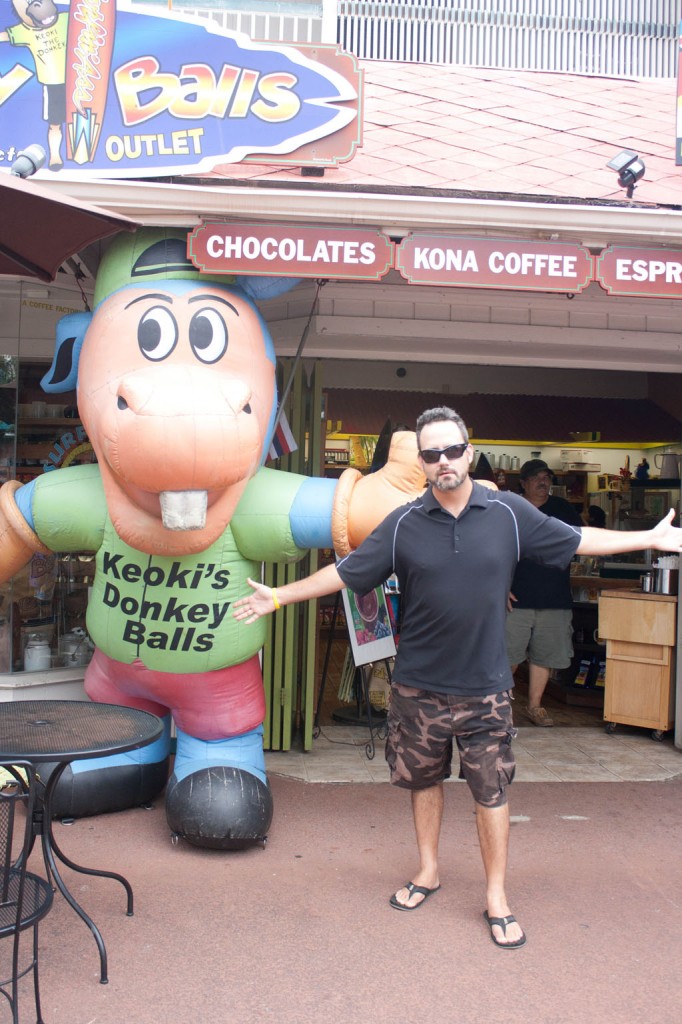 At the port end of the town, they were having canoe races. The place was packed with canoes, some with recognizable names (Livestrong for one) and then looked at the old temple. 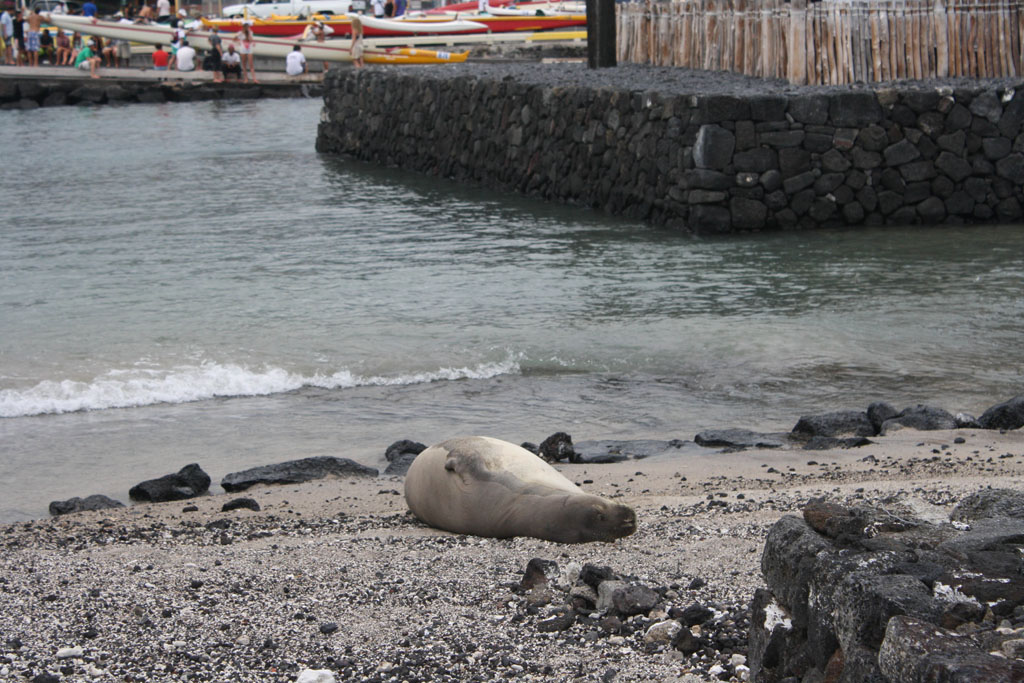 The photo above is a Hawaiian Monk Seal, a very endangered seal. As the name alludes to, they live “monkish” lives and as a result haven’t procreated like they should. Poor little guys. This one was sunning himself on the beach. 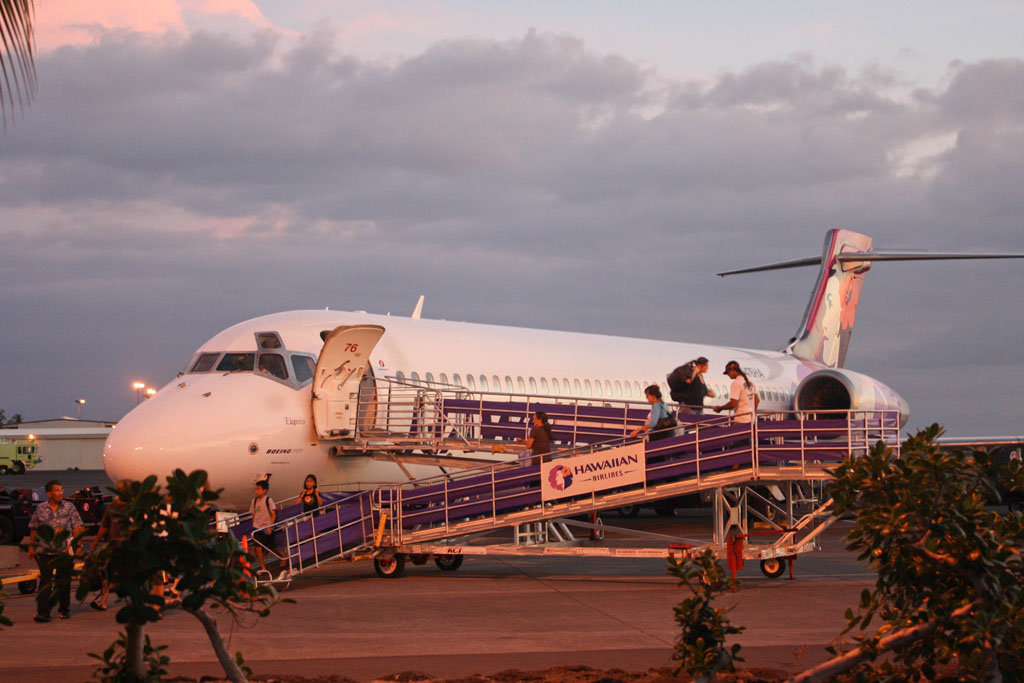 Finally, it was time to head home. The flight home was probably the the worst flight I’ve ever experienced but I am trying to forget about it so that I can remember only the good stuff about Hawaii! We got lucky with our trip and had the cheapest vacation we’ve ever had, aside from Tucson when we stayed with my parents. I loved swimming in the ocean and laying on the beaches and I definitely want to go back to the other islands. Someday.