Saturday night Michael and I picked up another couple and we went to the local dive bar to watch the UFC show. Going into dinner, I had about 1300 calories to spare because I’d ended up having such a good work out in the AM.

Bar food is hard for me. I never know what the “healthy” option is. Bar salads are usually iceberg lettuce–not too thrilling. I ordered a Vodka tonic. 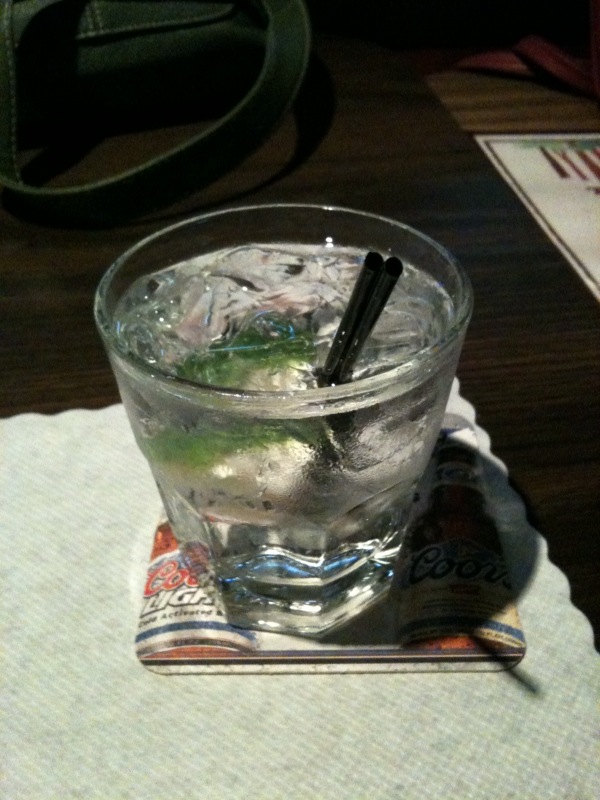 For dinner I had the BLT sandwich with a side salad (iceberg!): 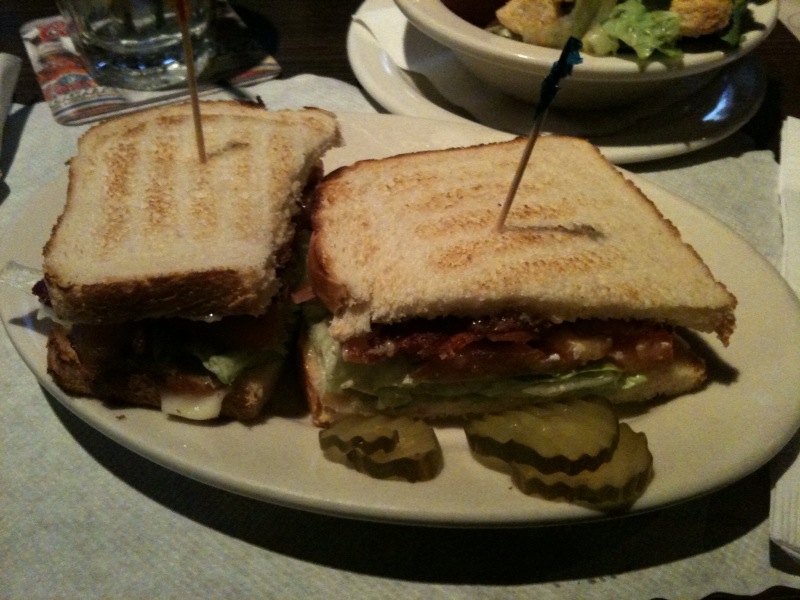 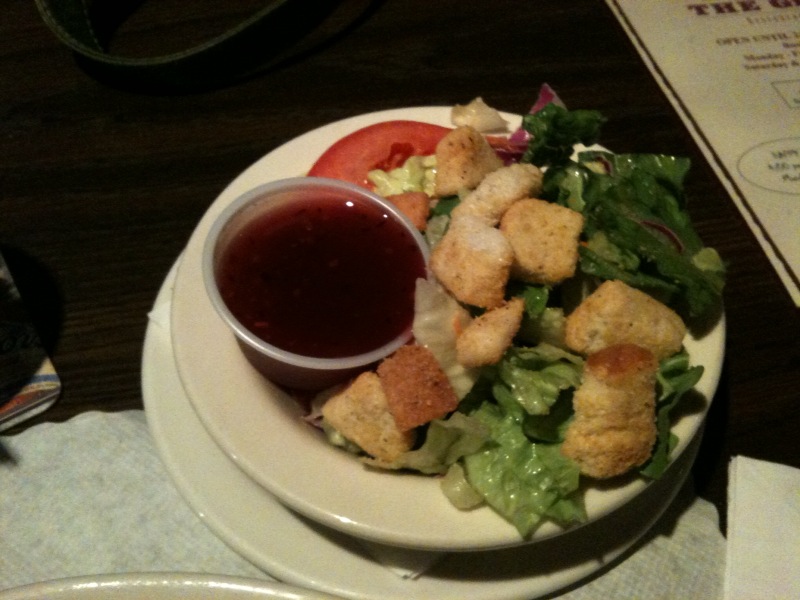 The dressing I wanted was the Raspberry Vinaigrette. What I got was strangely syrup-like. It had a too thick consistency and it was really sweet! Ick! The one good thing: Michael ordered some Mozzarella Sticks. What’s better than FRIED CHEESE??? 🙂 I was good and only ate 3! It had been about a year since I had Mozzarella Sticks and they did not disappoint. 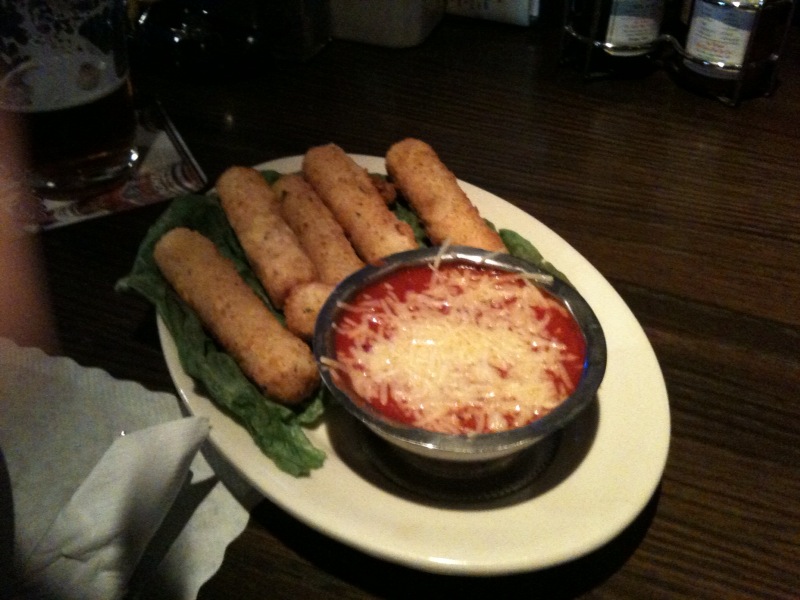 The UFC show was pretty good. Lots of drama with the fights.I ended up drinking 3 Vodka tonics. I only wanted to 2 but for some stupid reason ordered a third and then had to drink it…I hate when I don’t listen to my body.

Michael surprised me with breakfast in bed. 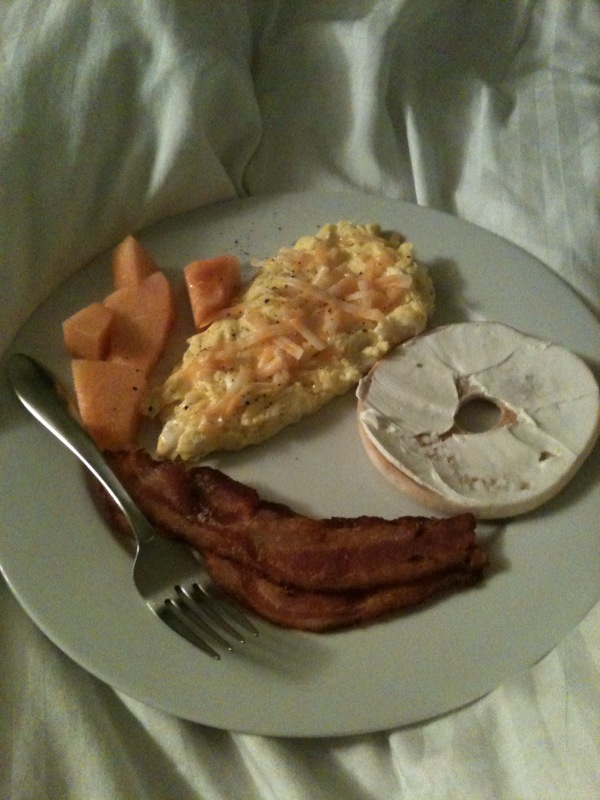 Scrambled eggs, bacon (less crispy just like I like it), half a bagel thin and some cantaloupe. It was the perfect breakfast! We ate in bed and watched an episode of “House Hunters” on HGTV. I knew before I even got out of bed that I was sore. My hamstrings have been SCREAMING at me all day. Stupid gardening!

I went to the pool in hopes of weightlessness and no sore legs. Swimming felt really good (the hot tub felt even better) but as the say progressed I continued to tighten up. 🙁

For lunch, Michael and I met my cousins at the Kennedy School. They were visiting from Poulsbo, Washington (a small town on the Peninsula) and it was great to see them! Michael and I hung out in the Boiler Room while we waited for them to arrive (they were biking!).I love the Kennedy School because it’s so “Portland.” Very artsy, funky and weird. It’s an old school converted into a hotel/bar/restaurant. There’s a bunch of different bars and restaurants inside the school. Since the Boiler Room was not kid-friendly, we headed over to the Courtyard Restaurant when my cousins arrived. 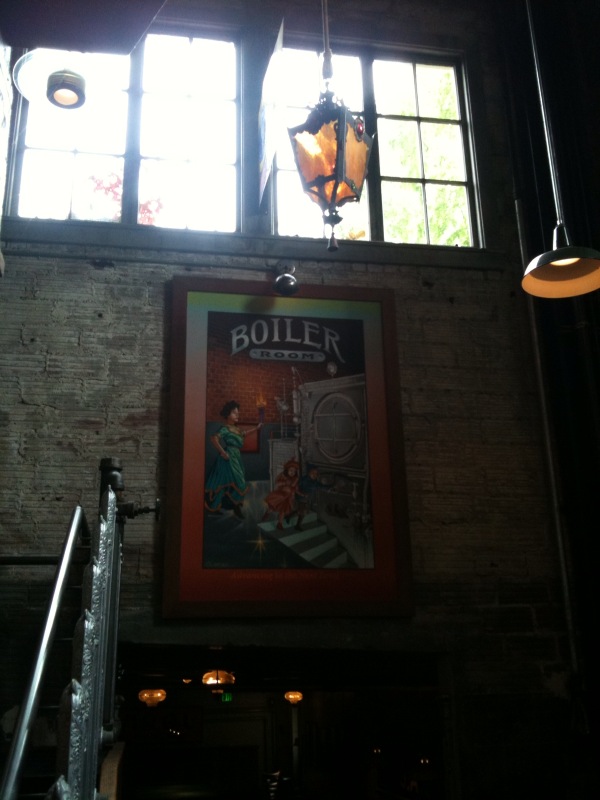 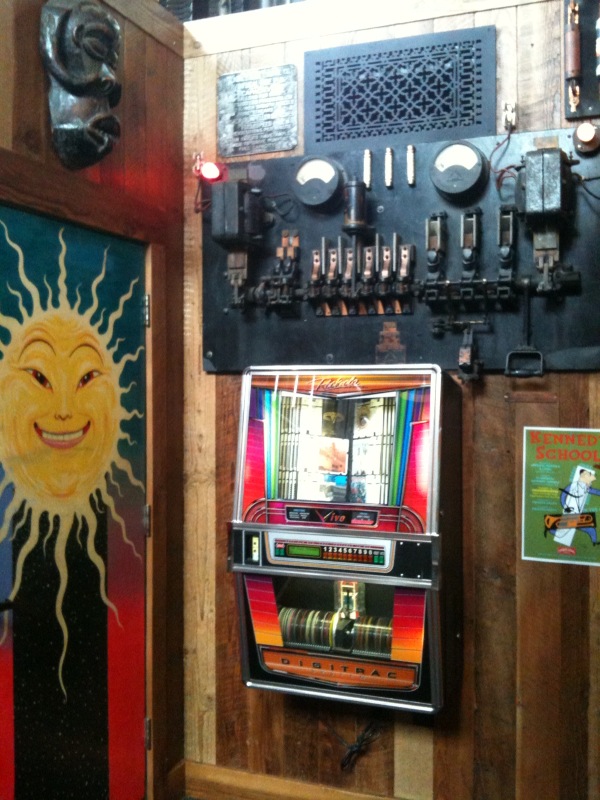 Michael and I split the Italian Panini and it was fantastic! Salami, roasted red pepper, artichoke hearts, garlic, mozzarella and tomato sauce. To die for! I want to recreate that sandwich at home!

The chips were homemade and very good too. Salty and peppery and I think I also tasted lemon…?

It was a good weekend so far. I wish the weather had been more cooperative so we could bike or hike. And I am definitely going to need a “Girl’s Night” soon!

Last night was fun! We met our friends at Vicente’s Pizza on SE Hawthorne. It was really dark so I couldn’t get any good pictures. I ordered a Greek Salad to start and then we ordered a large Hawaiian pizza. It came with peppers and onions on it–delicious! Since there were 5 of us, there was no risk of overeating. I had 1.5 pieces of pizza plus the salad. 🙂

I drank 2 vodka tonics at the restaurant and then we headed to our friend’s show. I had another vodka tonic at the club and then stopped drinking. This was on the wall in the ladies room:

The show was good. Michael and I left around midnight after they played. Driving home I mentioned Taco Bell (I wasn’t driving). Michael said he’d stop at Taco Bell if I was hungry. I was STRONG!!! Even in my buzzed state I refused.

I slept for a good 9 hours! 🙂 This morning I woke up about 10am and did my monthly weigh-in and measuring. I am VERY happy with the numbers. Check out my “Current Weigh In and Measurements” Page to see.

I’ve lost almost 3 pounds since last month’s weigh in! Woo hoo!! I also lost an inch everywhere on my body except my hips-I only lost half an inch. I am very excited to see progress. We are heading out for our bike ride soon!