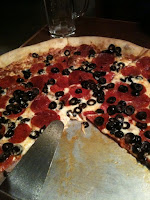 I’ve previously stated that I stopped eating pizza for two years. I did this because I could not trust myself to eat it in moderation. When I reached my goal of losing 100 pounds, my boyfriend Michael took me to his favorite pizza joint in Portland: Apizza Scholls on SE Hawthorne. It was a wonderful moment! We celebrated with slices and wine and he told me how proud he was of me and my amazing accomplishment. It was probably one of the sweetest things he’s ever said. Aww…Anyways. I now eat pizza again. But I have learned to eat it in moderation.

We usually get a Papa Murphy’s take and bake pizza when we’re craving some fat. They have a new thin crust deLite pepperoni pizza that only has about 165 calories a slice! Excellent.

Last night we went out to dinner to one of our favorite Portland restaurants: Hub on SE Powell. http://www.hopworksbeer.com/. And yes, we got pizza.

I ate 2 slices (which was really 4 slices since the pieces were so large). I don’t feel guilty for eating 900 calories of pizza though because the rest of my day had been great and I ended up coming in at my goal for the day!