We had such a good time at Feastpdx! Our first experience there and it was a hit for sure. We definitely want to go next year. I think most of the events were sold out. There was a brunch event that sounded like fun to me. Maybe next year we can try that one. 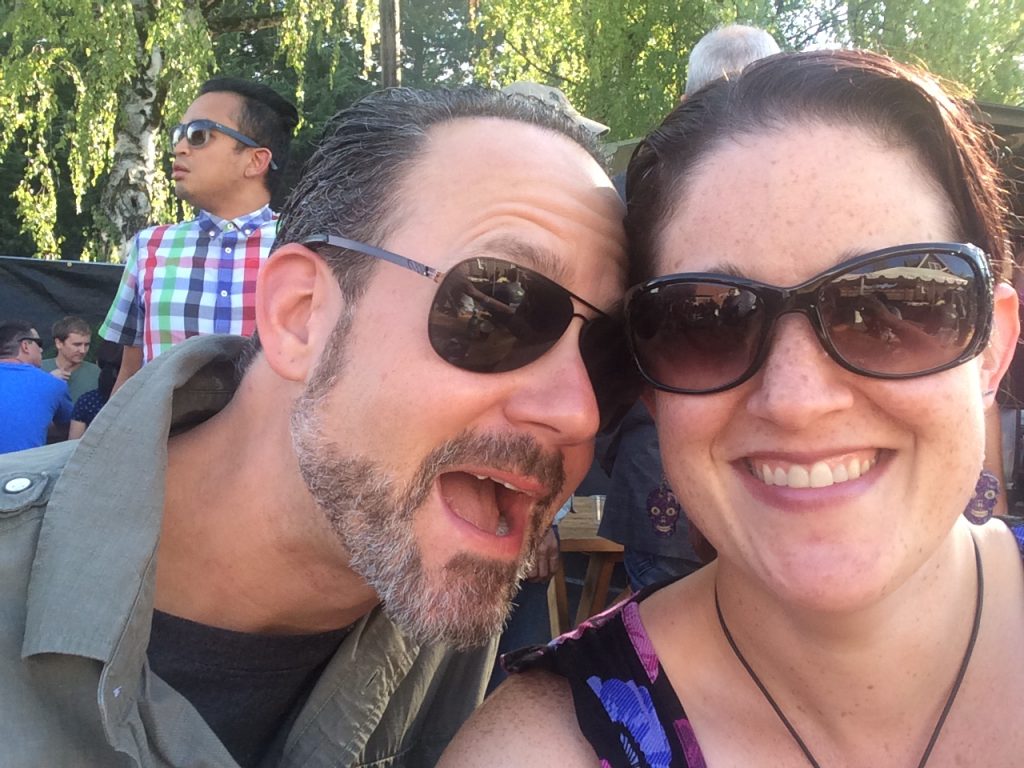 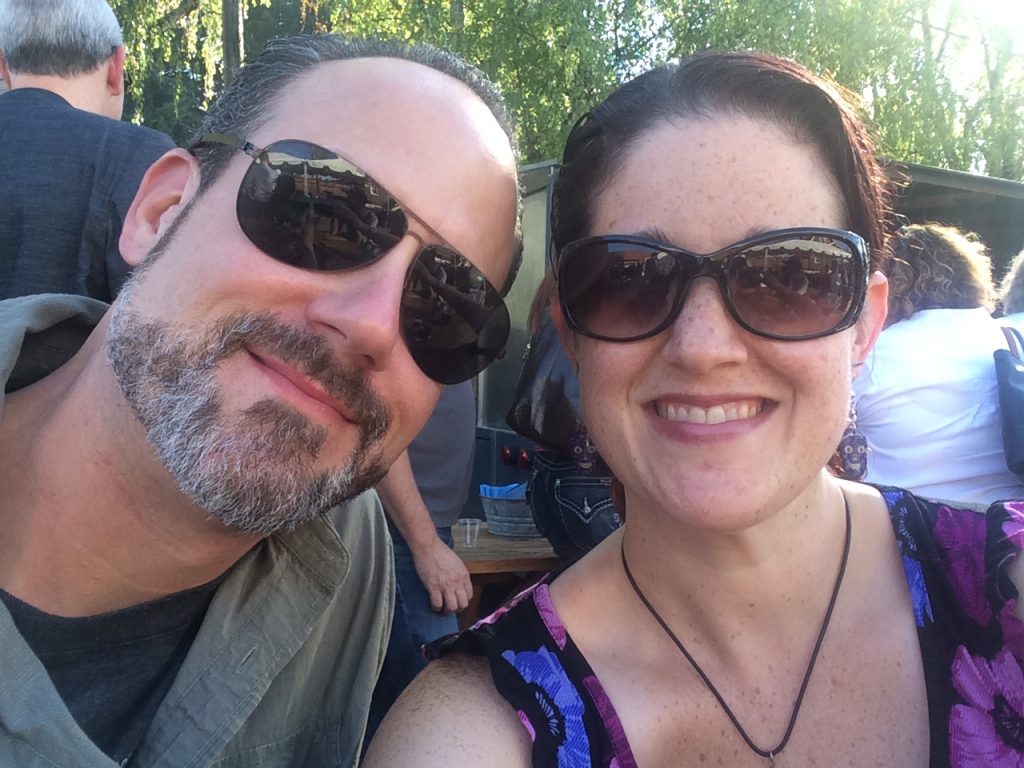 After Feast we headed downtown to check in at the hotel. We got a room with a huge jacuzzi tub (so relaxing) and a view of the “park”. (It’s not really a park.)

We walked a few blocks from the hotel to Departure. It was still kind of early and we wanted to get a drink at the rooftop bar. 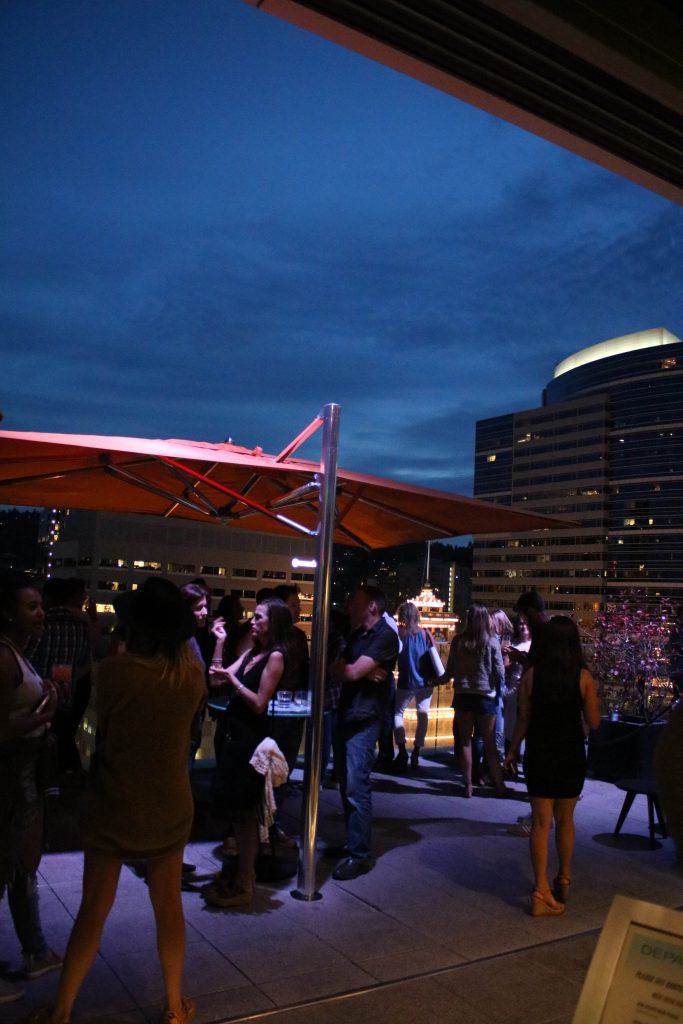 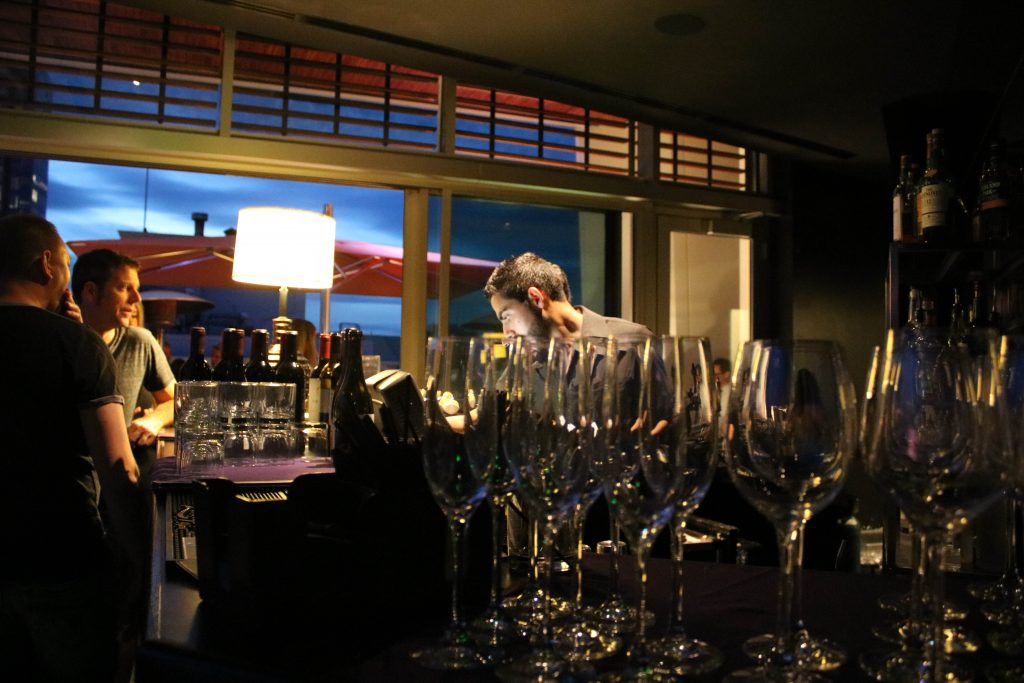 Great views of downtown Portland! Michael got an Old Fashioned and I got a glass of Pinot Gris and we stood outside for a bit and then got a table inside to finish our drinks and just relax a little bit. 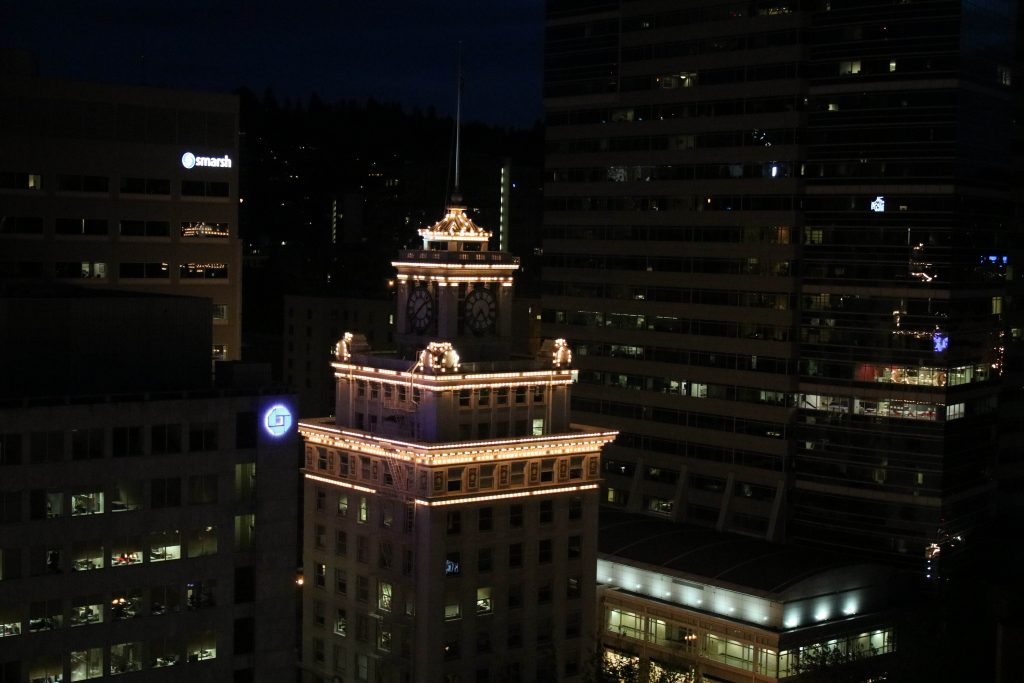 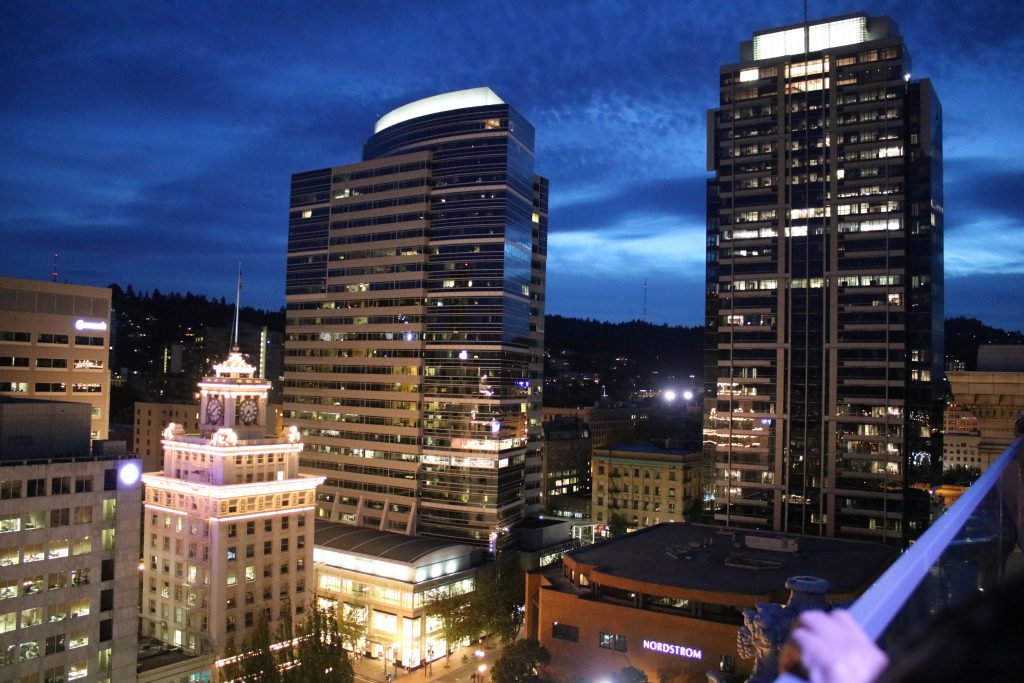 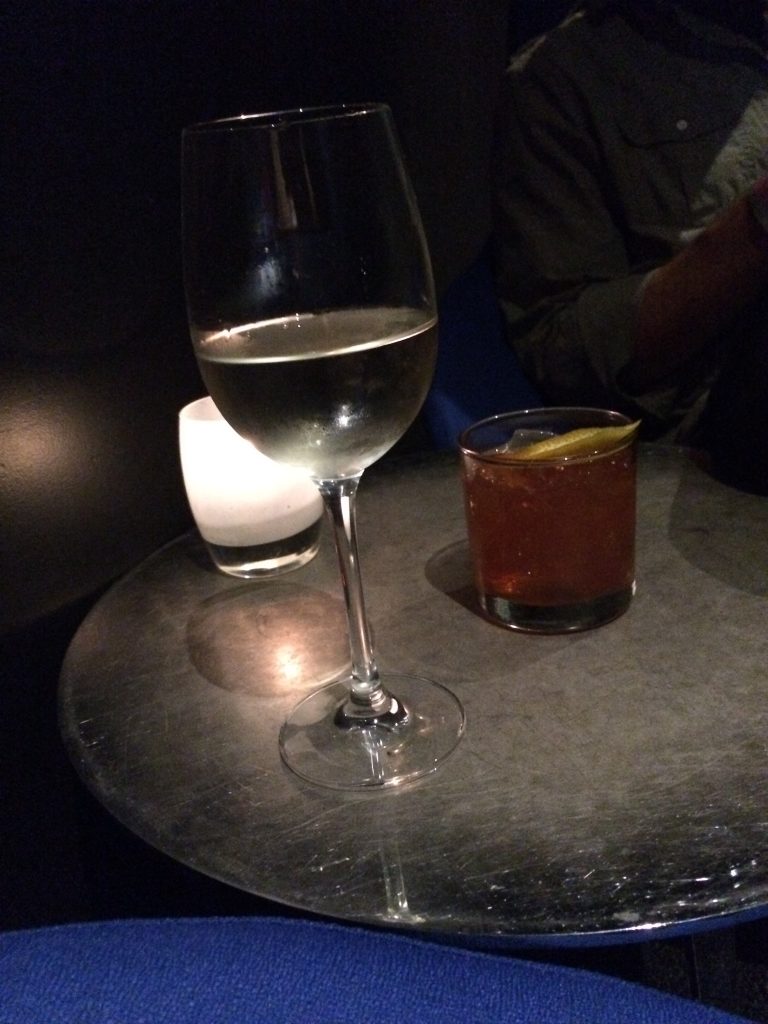 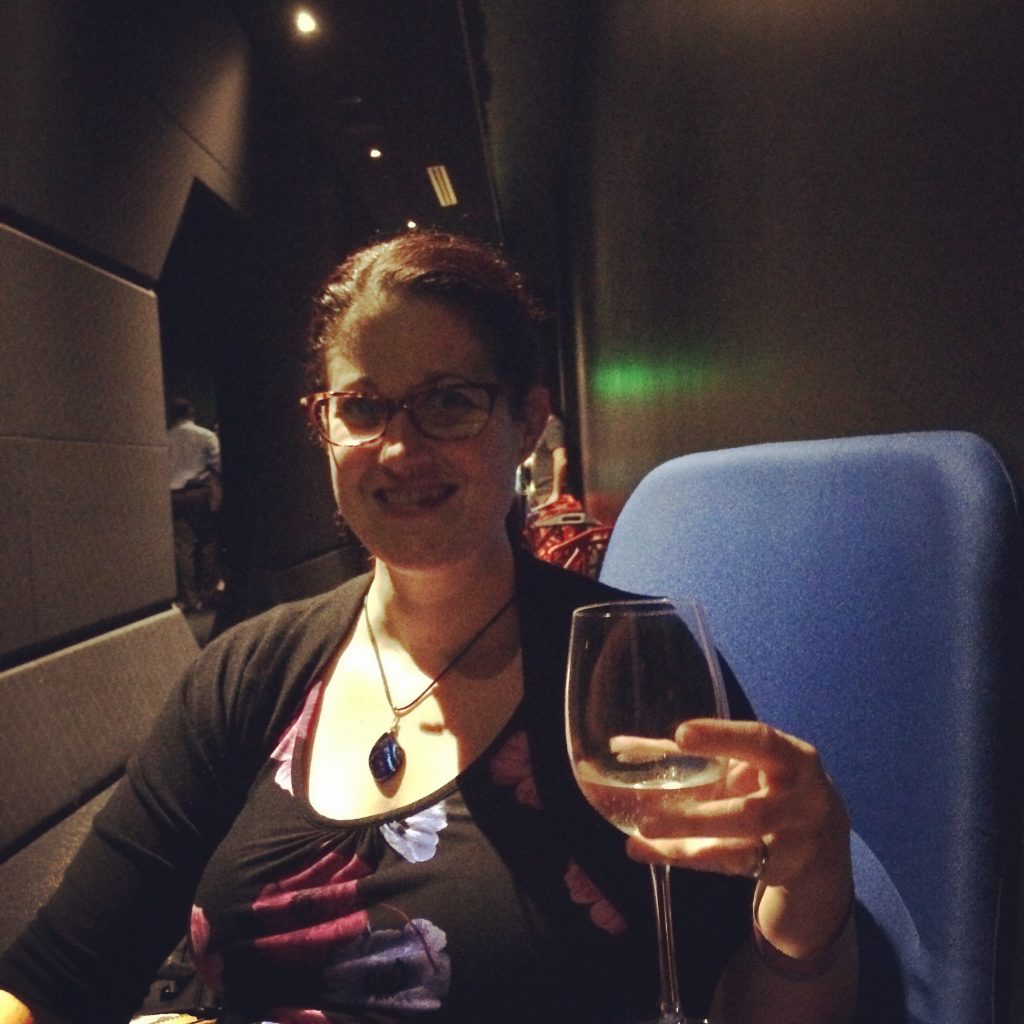 Then it was back to the hotel for an early-ish night. I have to say, it was kinda nice sleeping all night long!!!! Not that we didn’t miss our baby, of course, but sleeping all night and not being woken up multiple times to feed him was a nice little treat for both of us (especially for me). AND sleeping in!! We got to sleep in late the next morning. AND we got to be lazy in bed, taking showers…no real schedule or feeling rushed. Sorry Logan, but it was kind of blissful. 🙂

We also got to go out to brunch! Something we rarely do. We went to the Bijou Cafe in downtown Portland. I’ve never been but Michael has been a bunch of times and likes it. (The line for Mother’s was insanely long so we didn’t even try it.)

The wait for a table at Bijou wasn’t bad, maybe 10 minutes. It was completely packed though, and after we got our table there was a big crowd of people that came in so the wait time definitely increased. We got there just in time. 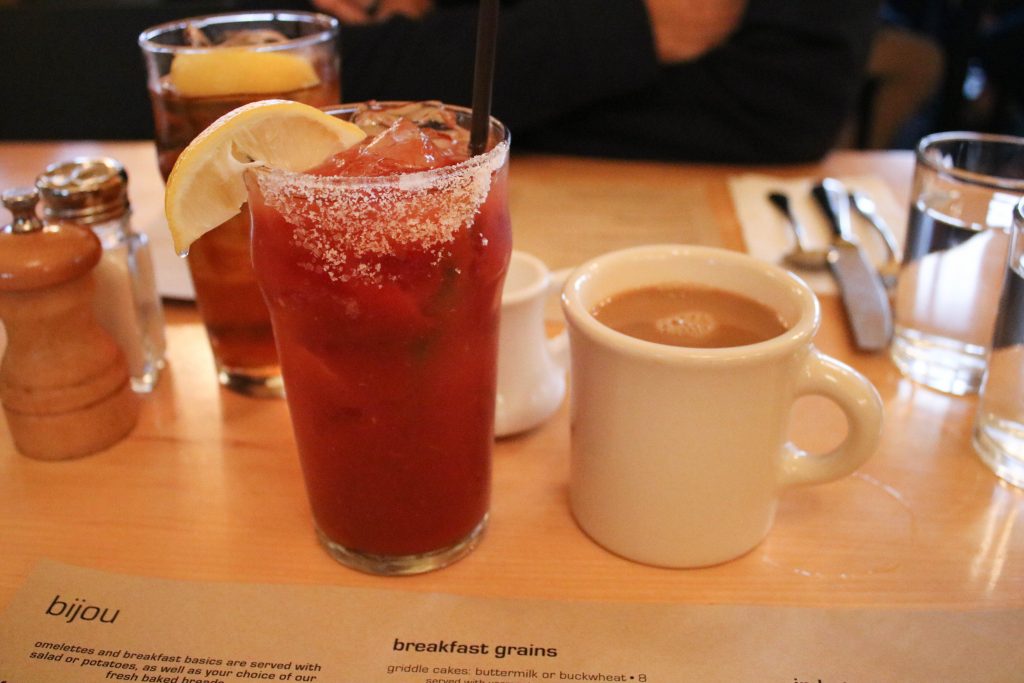 I splurged and got a Bloody Mary to go with my coffee. Both were divine.

There were so many tasty sounding things on the menu. Lots of unique items, in addition to your traditional breakfast items. Michael got an omelette with a green salad and baguette. 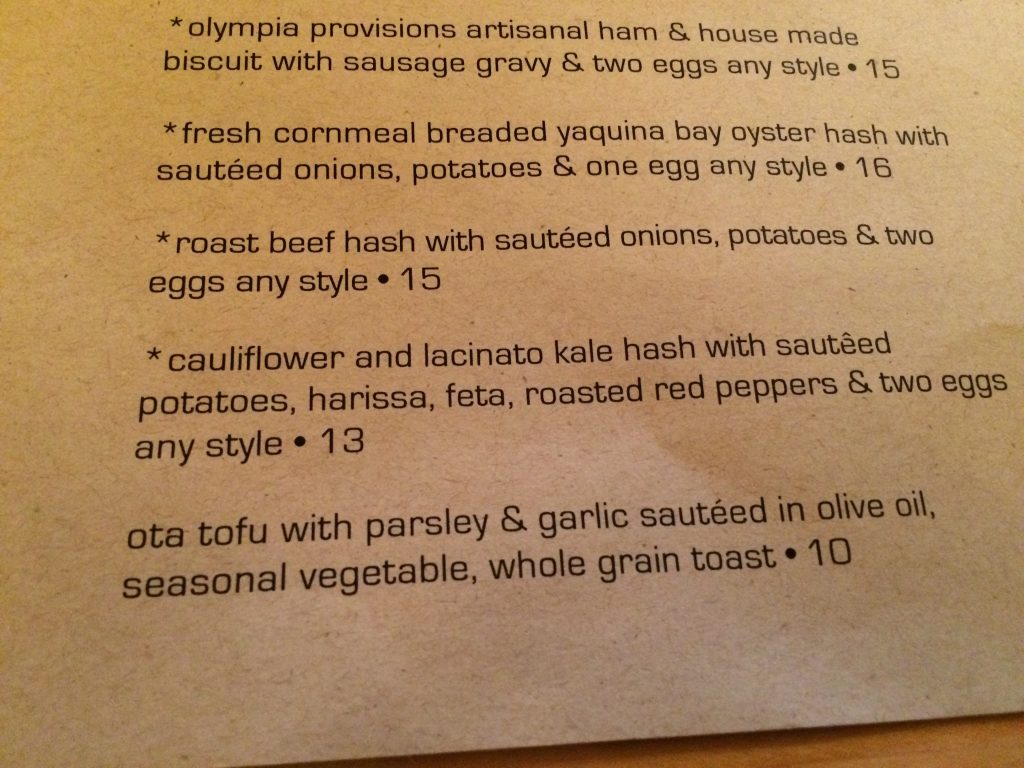 I was so tempted to get the French toast, or the special tomato, basil and feta omelette but what I ended up getting sounded so unique I couldn’t pass it up. I mean how many times do you see a cauliflower and kale hash with eggs on a menu?? 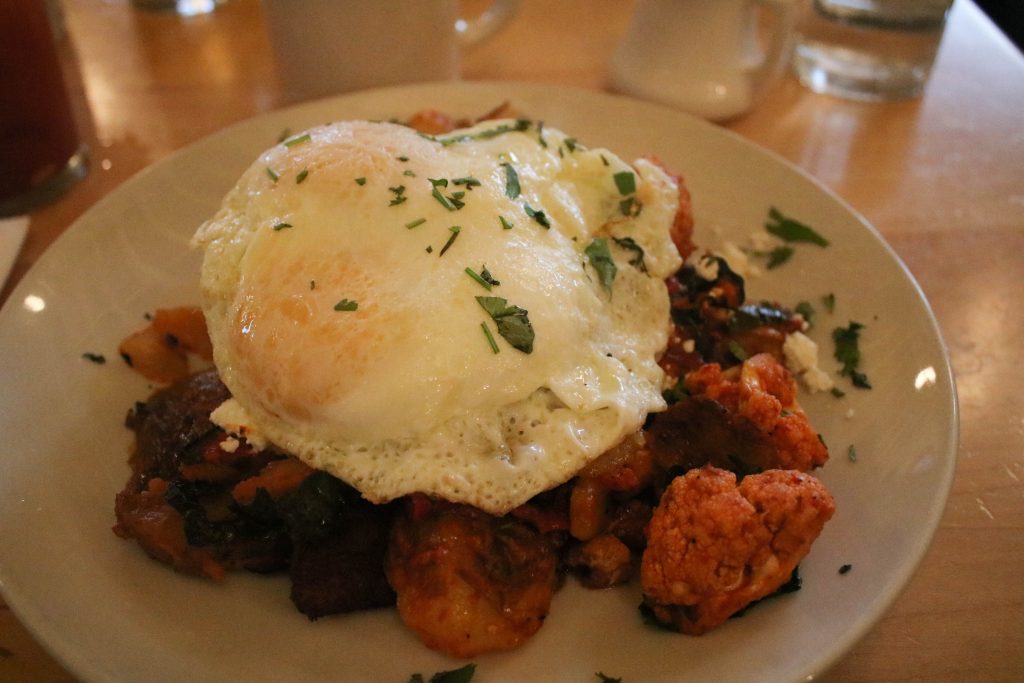 The flavors were so good. The potatoes were crispy. The cheese was perfect. The kale was chewy. The cauliflower was an odd thing in a breakfast but it worked so well. Topped with runny eggs. Perfection!

We enjoyed our breakfast and I drank multiple cups of coffee and then it was time to head back to the hotel, check out and go home.

Logan was GREAT overnight with my parents. I’m so glad. I was worried he’d have a hard time but he was a good baby. He started getting a bit of a cold on Friday, so I had worried about that too but he was doing alright. And he seemed happy to see us.

The rest of the afternoon was super lazy. Cuddles with the baby, the guys watched football, I worked on photos from the weekend…I had planned on going to the gym but I was just feeling kind of tired and lazy. It was pouring rain and gray out and that didn’t inspire me to go anywhere, either.

But we did take my parents out for dinner as a thank you. We braved the rain and went to Apizza Scholls: 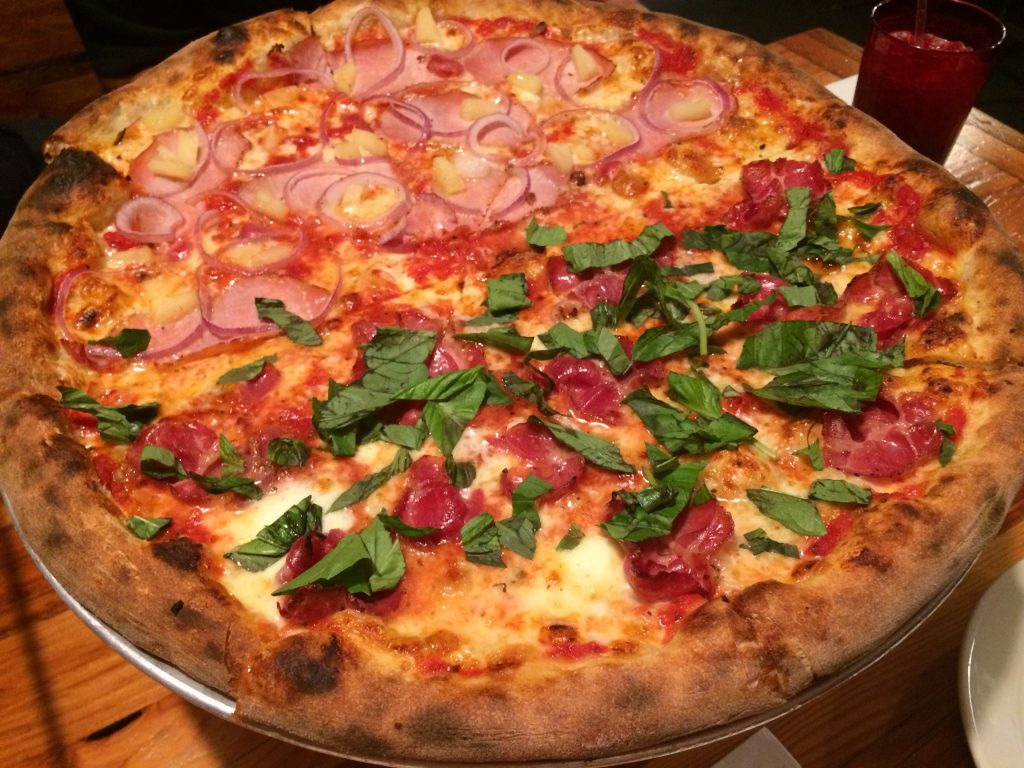 They’d never been so it was cool to be able to share it with them since we’ve talked about the pizza for years. Bonus: we got there right when they opened and got a table right away. And Boneyard beer: 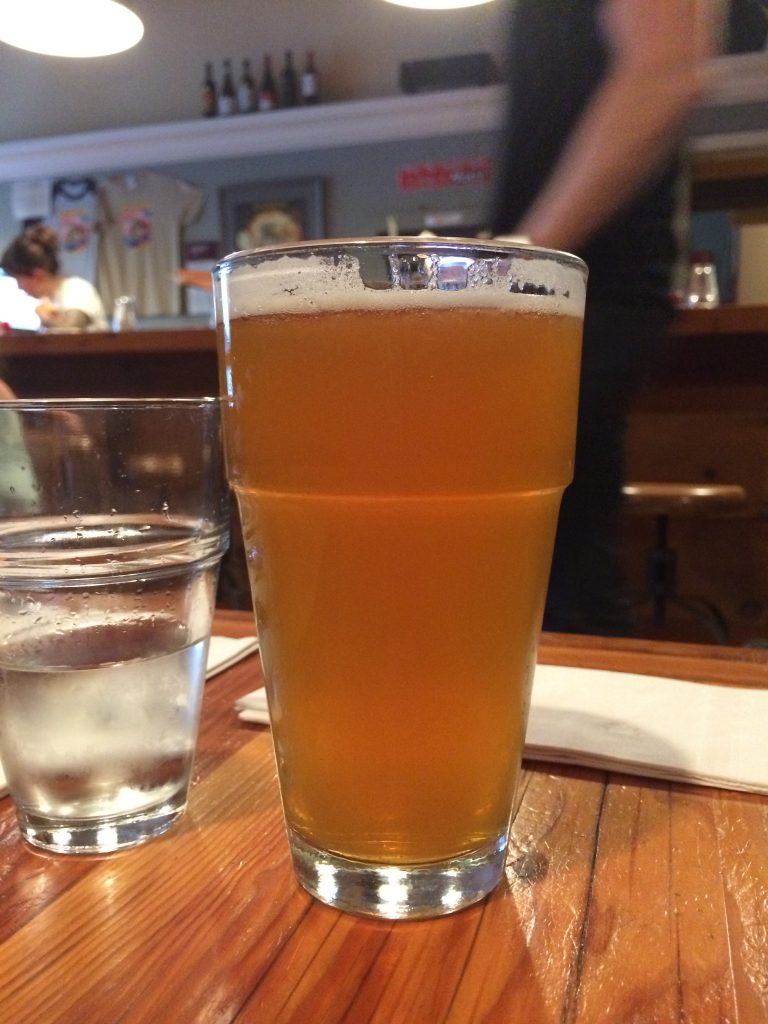 It was nice being able to spend a little time with them. We talked about family vacations and the ones I remember as a kid and whether or not Logan will remember trips when he gets old. I think it will be really fun exposing him to places! Even though he’s really young right now, I think doing that stuff early is good. For example, Michael and I both want to do a road trip down to the Redwoods someday in the next few years. 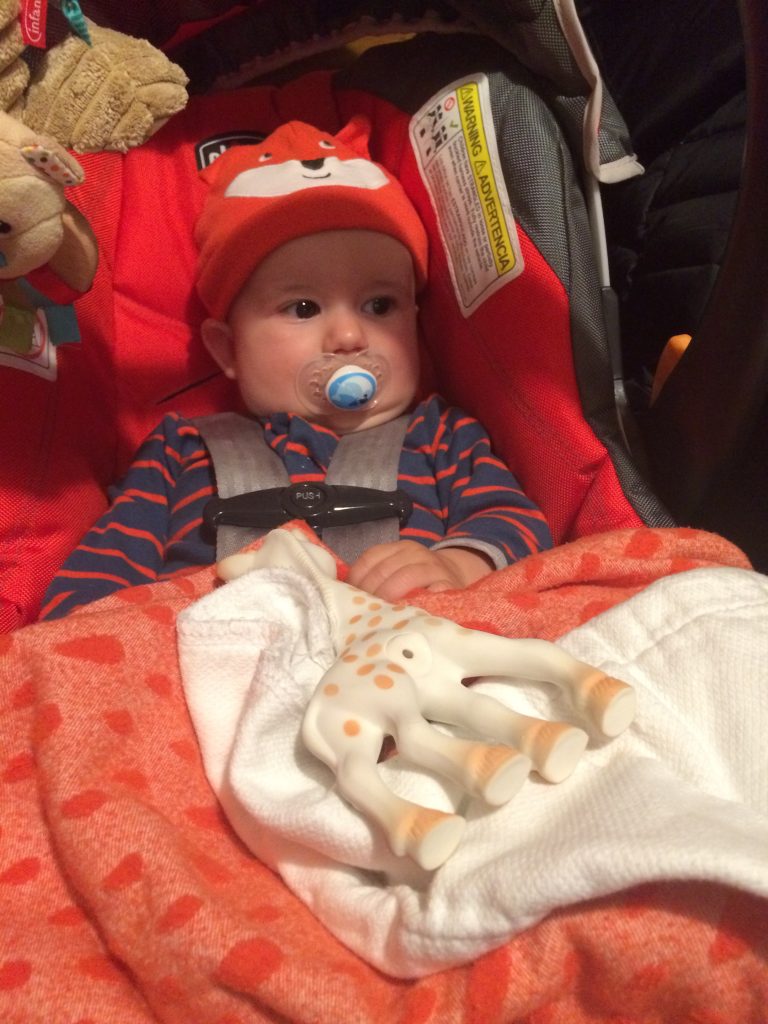 Logan was awesome at the restaurant. We finished all the pizza and then went home for an early night. Even though we slept so good at the hotel we were both SO TIRED! Sleep deficit I guess.

Sunday we were supposed to run a 5k but we decided not to. It was pouring rain Saturday and Sunday and we drove by the park where the race was going to be and it was one big mud pit. 🙁 So a big fat DNS for us on this one! Bummer.

After a decent bike ride home from work, Michael and I headed out to dinner. We tried for a second time to go to Ken’s Artisan Pizza. We’ve tried in the past but were discouraged with the over an hour wait to get a table. Michael would probably be more apt to wait, but not me. I think that’s ridiculous! We got to Ken’s Artisan and the place was packed. I thought for sure we’d be looking for another place to eat but we got seats at the bar immediately. Fine with me! Better than waiting an hour. 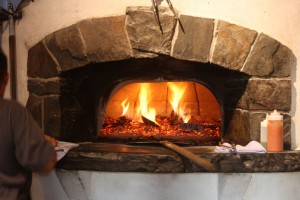 The atmosphere is really cool. It’s very open and industrial looking with windows that roll up so the inside of the restaurant feels outside. The kitchen is also right out in the open. You can watch them make the salads and pizzas right in front of you. We walked by the huge wood-fired oven to the bar, which was fun to see. 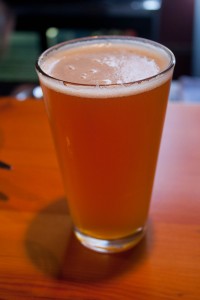 I had the IPA beer with dinner. I wish I could remember what it was called. It was decent, lots of citrus and light enough for a summer beer. Michael and I split the Caesar salad appetizer. 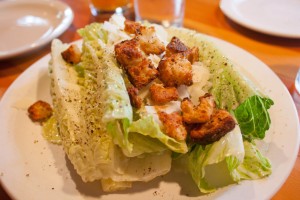 The salad was pretty good, but nothing close to the amazing Caesar at Apizza Scholls. This salad was more “milky” tasting instead of garlic tasting like I like. The freshly made croutons were delicious. They used Grana Padano cheese instead of Parmesan, which was okay but not as quite as flavorful as it could have been. 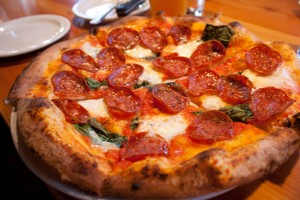 We ordered the Soppressata pie. It was basically a spicy pepperoni with mozzarella and basil. The pizzas were small but big enough for two people to share. There were six slices. I had two and took the last one home for lunch. 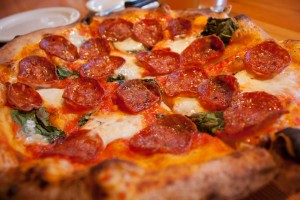 What’s the verdict? It was good pizza but not worth waiting an hour to be seated. Period. On the flip side, I’d always wait however long it takes to eat at Apizza Scholls. So I guess that’s your answer.

On another note, the Covered Bridges Century bike ride was supposed to be August 12th but I’ve decided not to do that event. I just could not get my weekly mileage up high enough in order to complete 100 miles. This was my weekly mileage for the month of July:

So frustrating! I couldn’t even get my mileage up to 80! Each week I failed to get my mileage anywhere close to 100 made me feel like a failure. This is supposed to be fun and instead of focusing on the GOOD things my training has done for me, I’ve been focusing on falling short.

I’ve been plagued with flat tires this summer (seriously, at least once a week) and for some reason I’ve been busier this summer than ever before. Or maybe I’m just not saying no to social events that conflict with long training rides on the weekend. Who knows. Either way, I’m not ready for 100 miles. I’ve learned my lesson when it comes to pushing myself further than my body is ready for (Hood to Coast ring any bells?) and I didn’t want to end my summer with an injury.

The plan is this: Peach of a Century. It’s September 23rd so that gives me another month to try and get my mileage up. I will keep you posted.

QUESTION: Have your summer fitness goals been successful or sidelined?