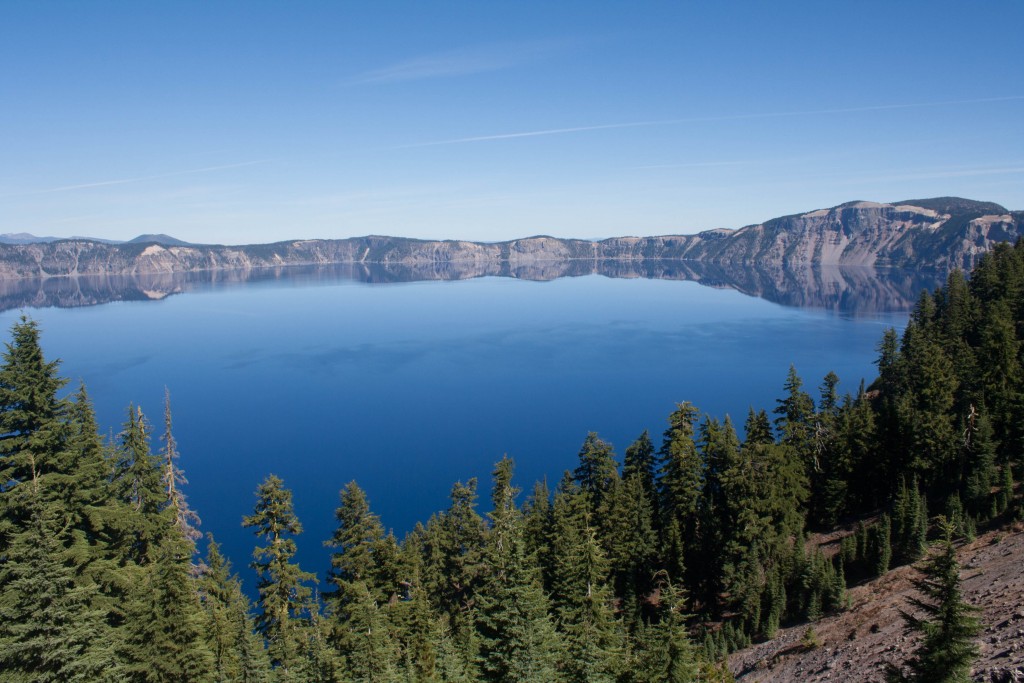 I’ve been to a lot of places in nature that are absolutely stunning. I remember a road trip when I was an angsty teenager who didn’t want to be stuck in the minivan with my family for two weeks as we traveled to Canada. Banff was a breathtaking place. I took a road trip in my 20’s to Montana to visit my best friend Rachel who was living in White Fish and I went to Glacier National Park–again, amazing, stunning, gorgeous place. But none of those places really compare to Crater Lake.

Sure, these beautiful places that are larger than life are something that sticks with you. But nothing really prepared me for Crater Lake. I’d seen pictures of Crater Lake, of course, for as long as I could remember and I remember thinking “that would be cool to visit someday.” But once we were there, 7,000 feet up, looking down into the Crater I felt…humbled. 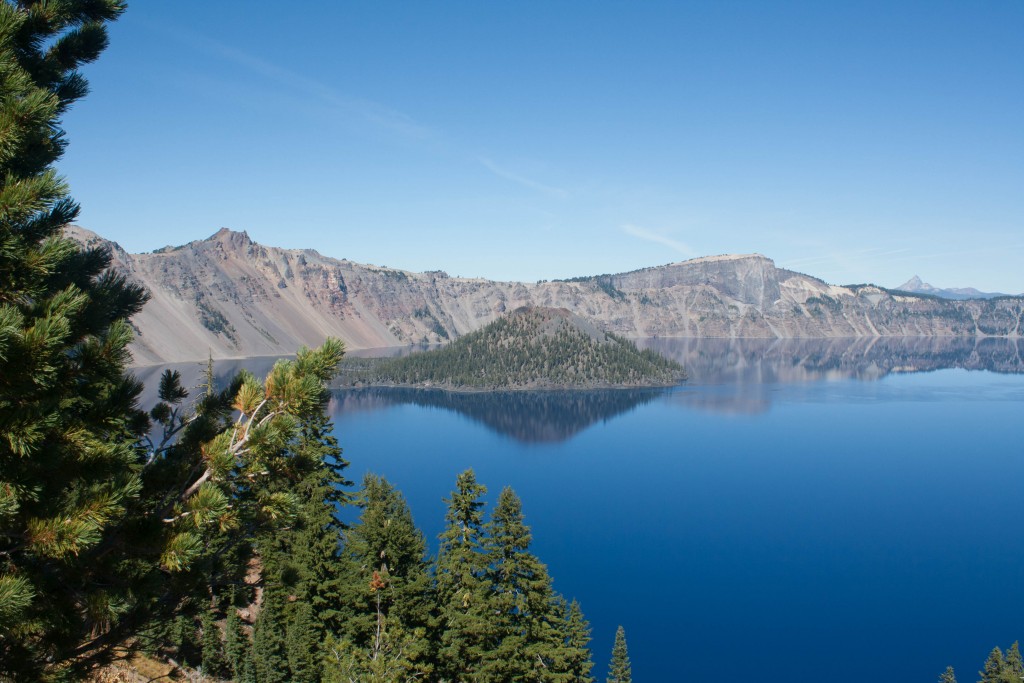 The photos I’d seen my whole life of Crater Lake do NOT do it justice. The posters, the photos, my photographs…it really doesn’t illustrate just what the beauty is like when you are really there. I felt very SMALL standing on the edge of the crater. 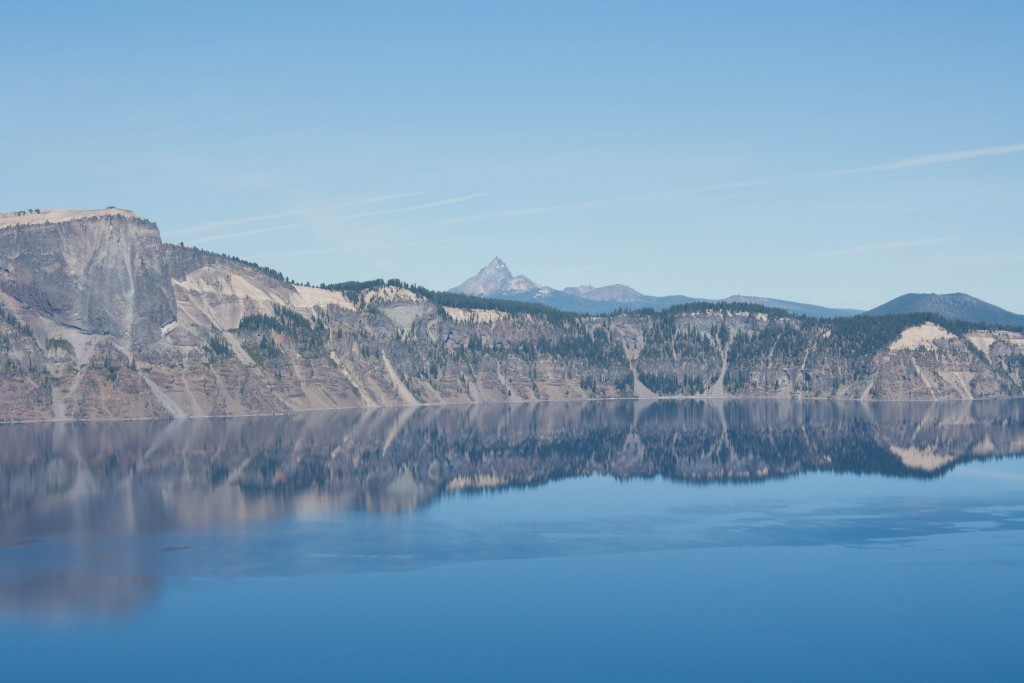 The water was so blue, too, a blue I’d never really seen before and trust me–the photos don’t show just how rich the blue water was! There were spots of turquoise on the edge, too. 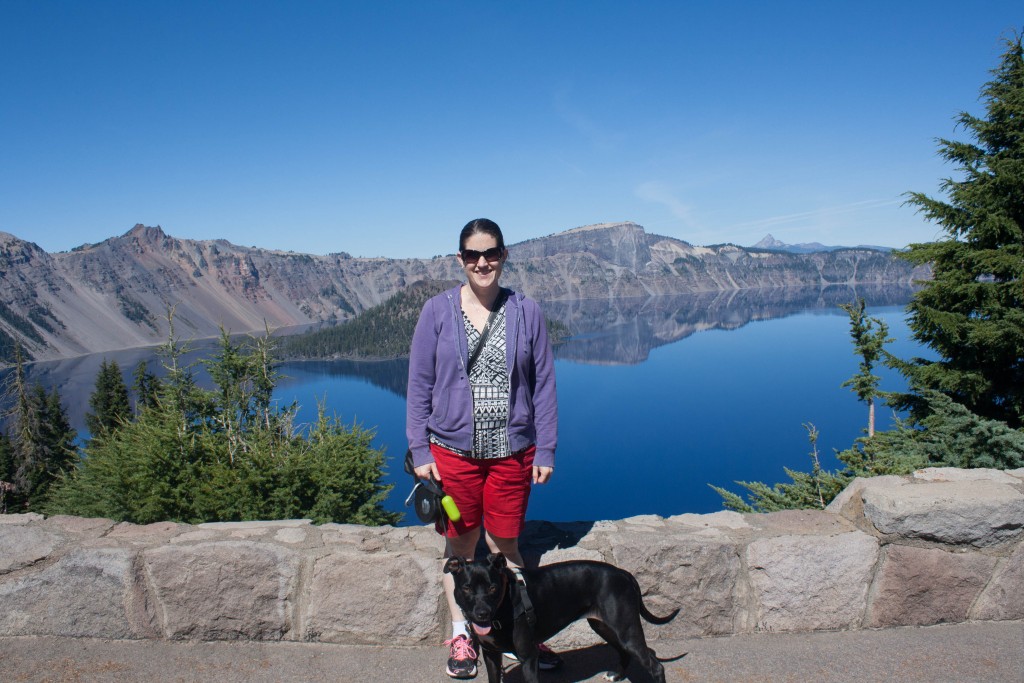 Crater Lake National Park was established in 1902. It’s 183,00 acres and the depth of the waters in the lake is 1,943 feet! Apparently the lake formed 7,700 years ago when a volcano collapsed after a huge eruption. The lake is the deepest in the US and fed by rain and snow. The park gets an average of 43 feet of snow a year. Which doesn’t seem like a lot for some reason. When we were there (mid-September) there was evidence of recent snowfall (just a little bit) at the highest parts of the park. You can take boat tours (which sounded fun and I want to do that someday) in the lake but you have to be able to hike down the steep cliff to get down to the lake. I wasn’t sure I could do that. 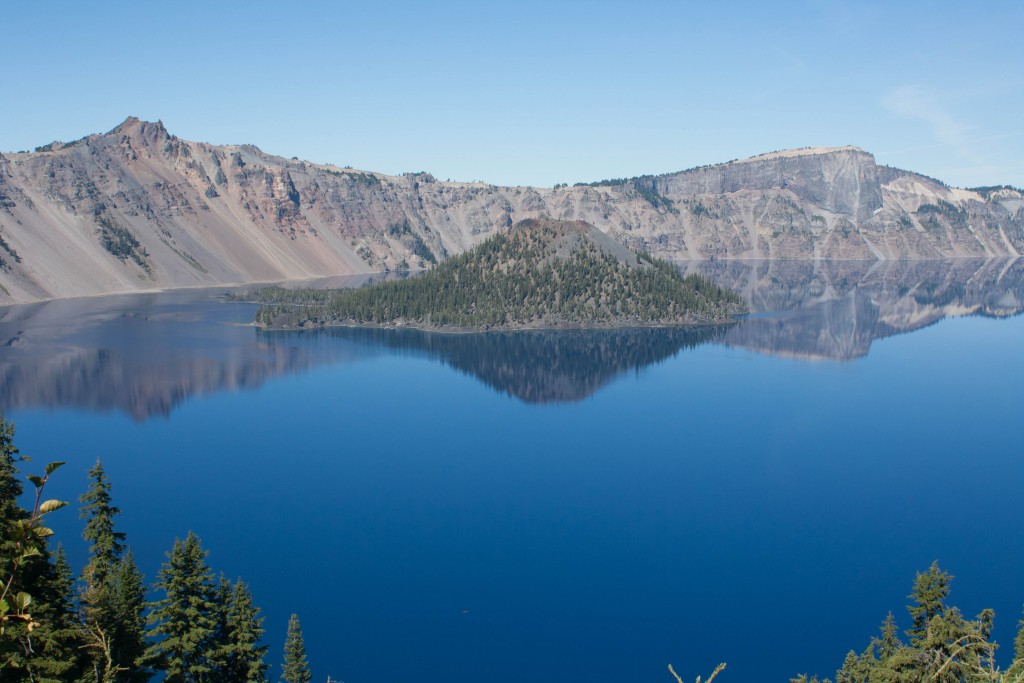 We drove up to the top of Crater Lake where the Lodge was (the Lodge just turned 100 years old too!). It was a really popular place, obviously, but we managed to find a parking spot near the lodge in the huge lot. We’d packed sandwiches and so we grabbed the mini cooler and sat on the edge of the crater on the rock wall and ate our lunches while we looked at the view. The sun felt HOT but it was pretty cool so high up–I’d say 60-65 degrees would be generous. 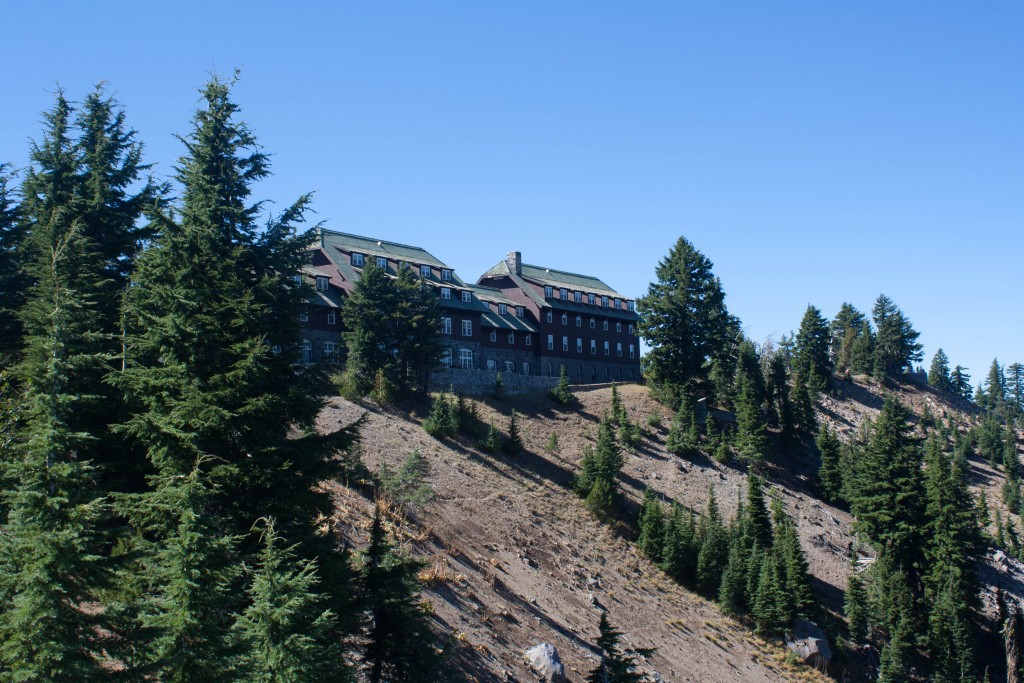 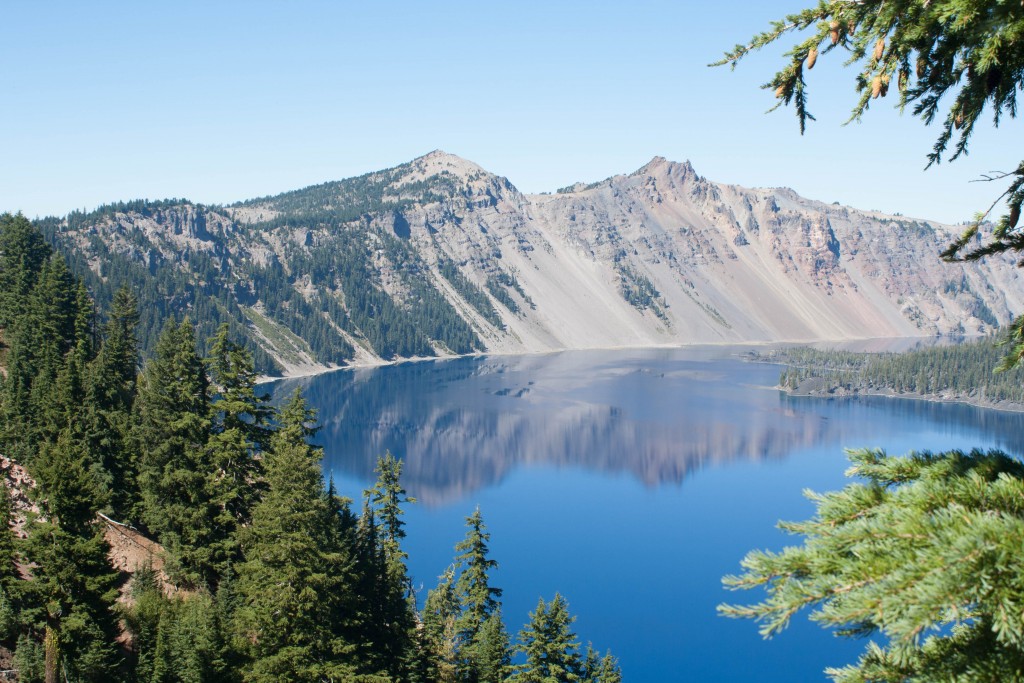 The bummer is that dogs aren’t allowed on most trails in the park. There are three or four that are designated as pet-friendly trails and you can bring dogs to the parking lots and something like 50 feet away from parking lots. I don’t feel like we missed out not being able to do “real” hikes in the park because we still got to enjoy the views and go on a few hikes (more later). 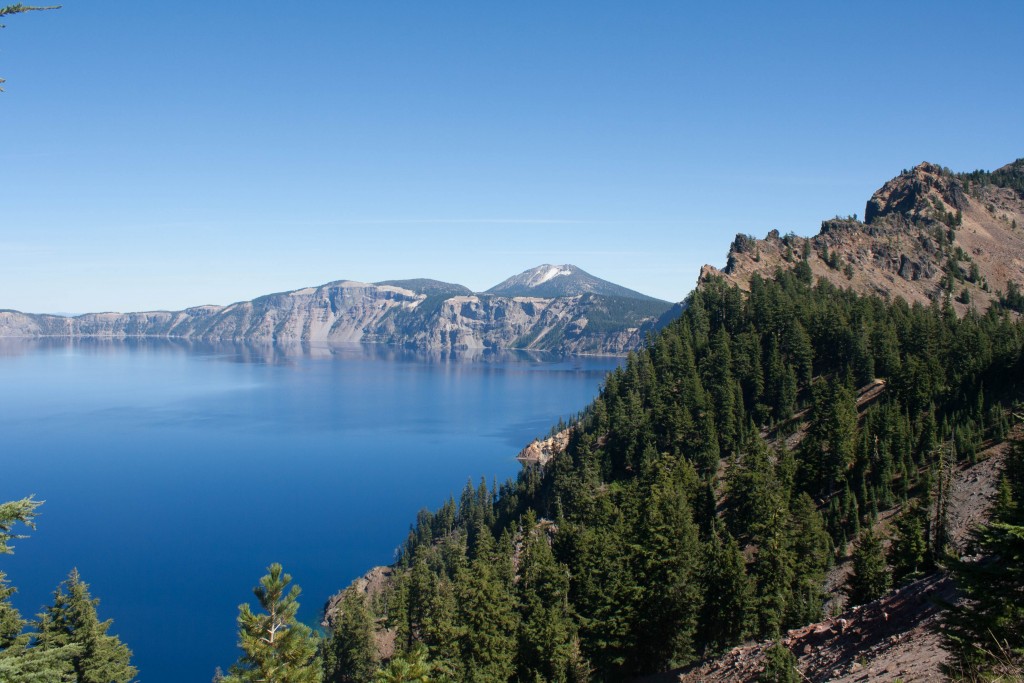 Plus, being pregnant, I wasn’t too excited about trying to hike in the park. Unless you live at elevation and are used to it, it’s not recommended that pregnant women do strenuous activity at high elevations. We’d booked the trip months before I got pregnant, and I talked to my OB to make sure it was still okay to go (she said yes).

After our picnic lunch we walked along the paved trail along the Rim and I definitely noticed it was harder to breathe so high up. I’d been a little apprehensive about our trip after the disastrous attempt at hiking on top of the volcano in Maui when I got elevation sickness pretty badly. Thankfully, I didn’t have any elevation sickness on this trip! Maybe it’s because I had a day or two to acclimate to being at 3500 feet (where our cabins were) before going up to 8,000. 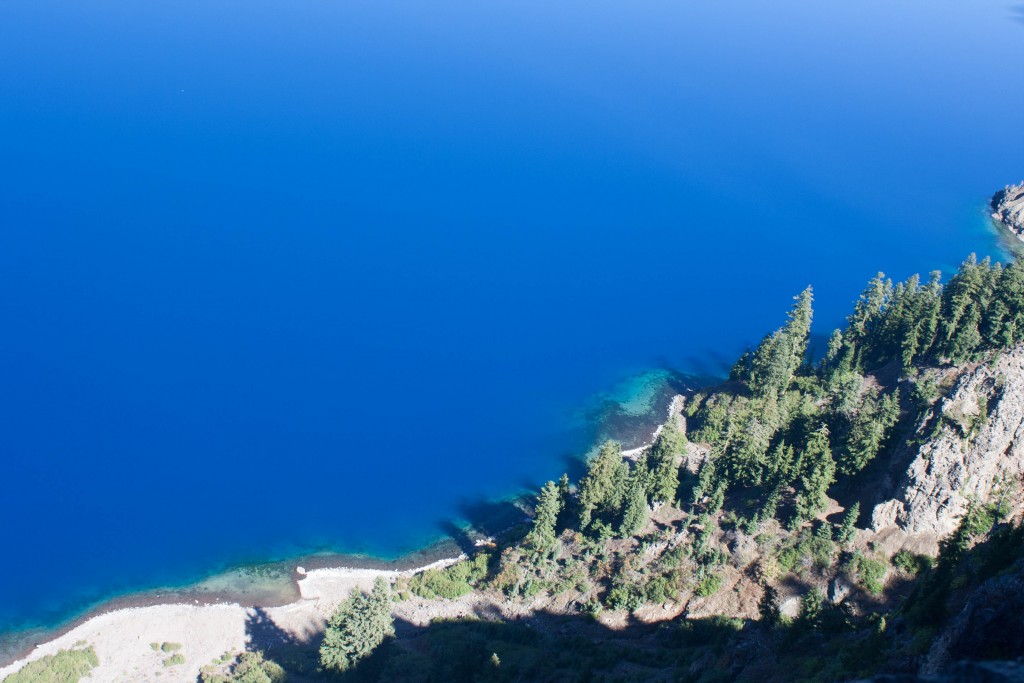 We walked down the paved trail until we got to the edge where it said no pets beyond this point. It might have been the trailhead for Garfield Peak (I think) and it was rated as “very strenuous”! We turned around and hoofed it back up the hill (which wasn’t THAT steep) and I was huffing and puffing, slow, fatigued, could barely catch my breathe and it wasn’t that far or that hard…! Elevation is no joke. 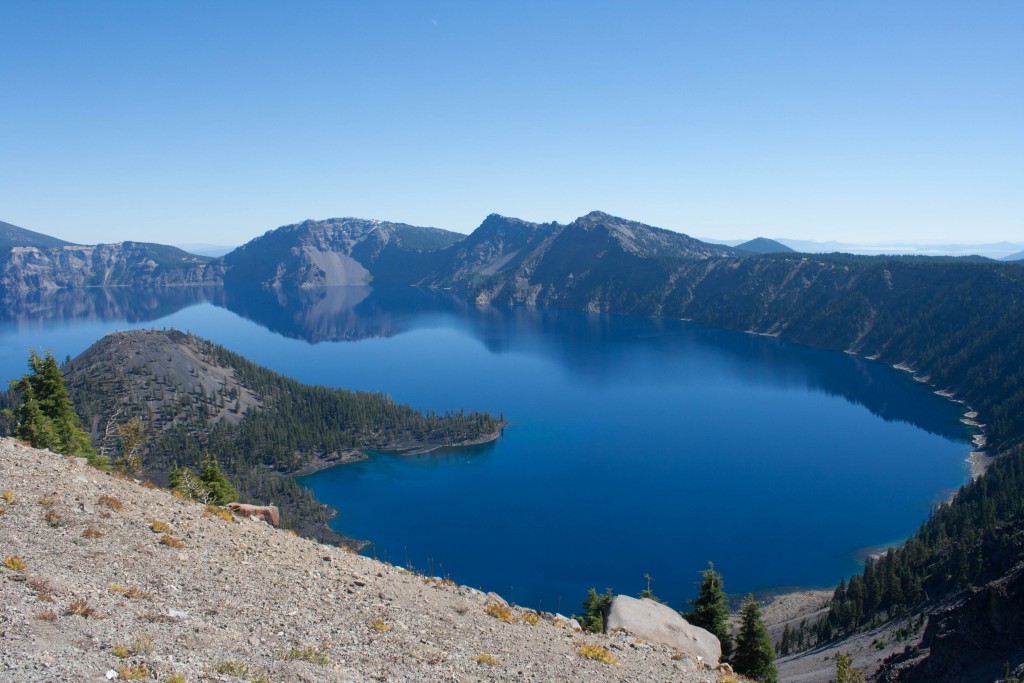 The island in the middle of the lake is called “Wizard Island” and formed 7,300 years ago. 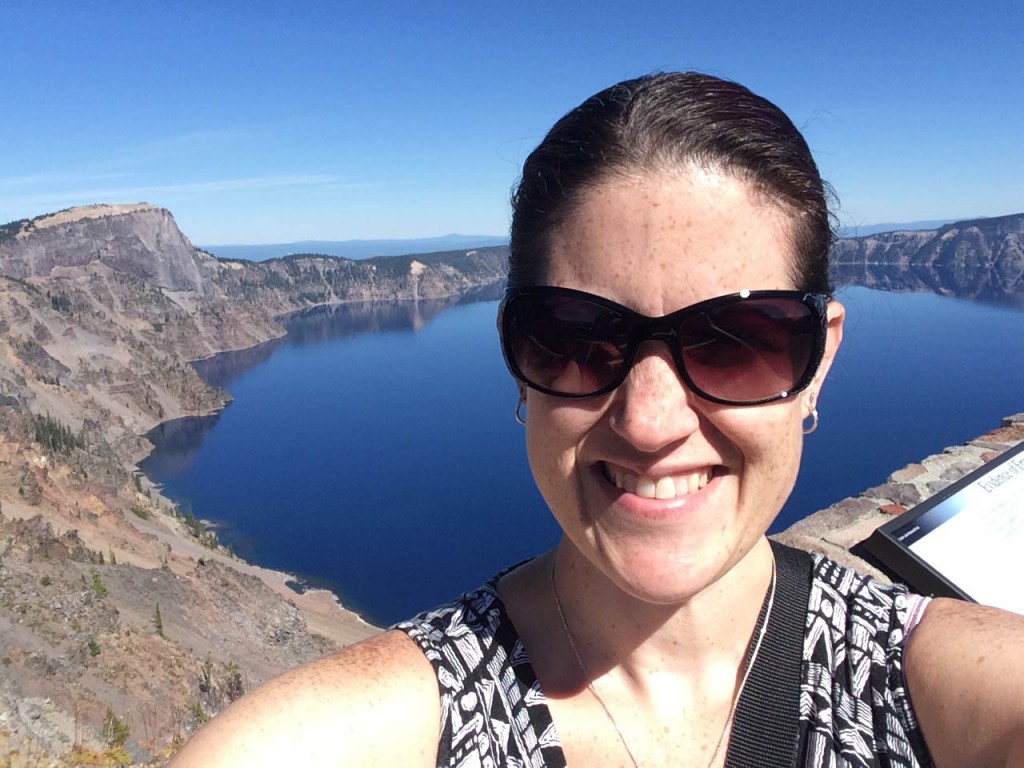 We got back in the car and then drove around the lake–the West Rim only. The East Rim was closed to cars for the day so cyclists and pedestrians could use the road. We’d planned on going back to the Park the next day and driving the East Rim side, but ran out of time. 🙁 Something to do next time I guess. 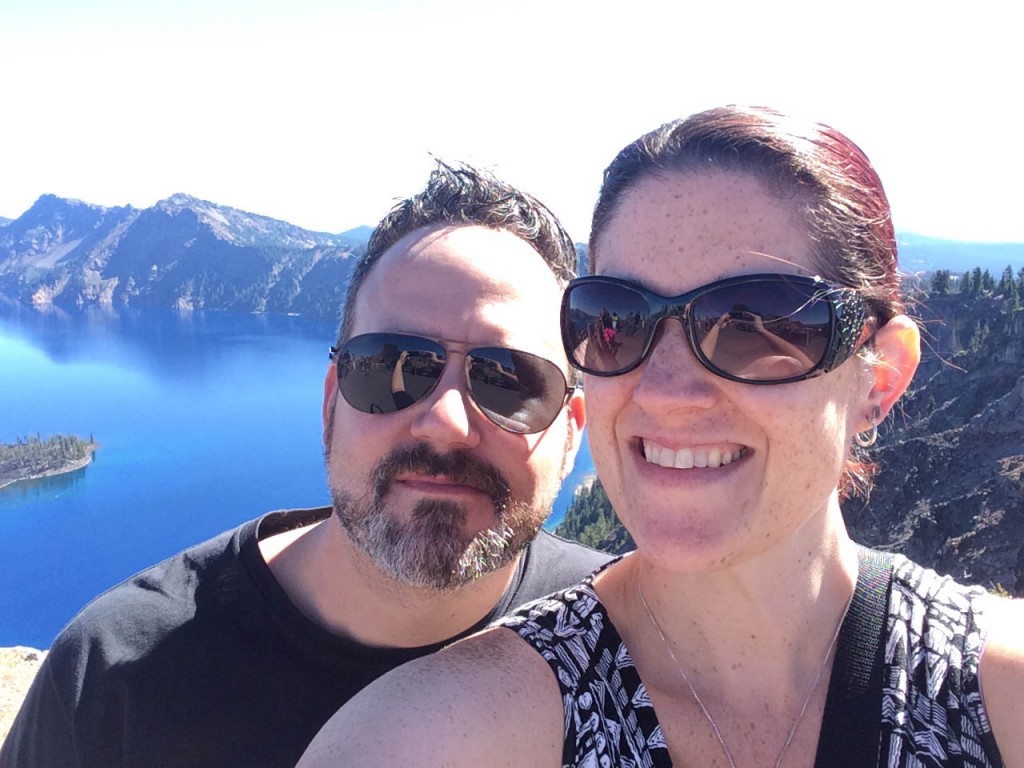 The drive around the Rim was slow. There were TONS of cyclists! It was pretty impressive. Some of them were hauling ass, too. I have no idea how they did it. We stopped at the viewpoints along the way –the Watchman Overlook, Discovery Point, and North Junction and then the road was closed and we turned around. I was NOT a fan of the terrifying view going back and being on that side of it! Yikes.

Lady of the Woods

This was one of the hikes we did with Bella. It started at the Park Headquarters and was about a 1 mile loop through the forest. You got to see the sculpture of a woman carved into the rock: 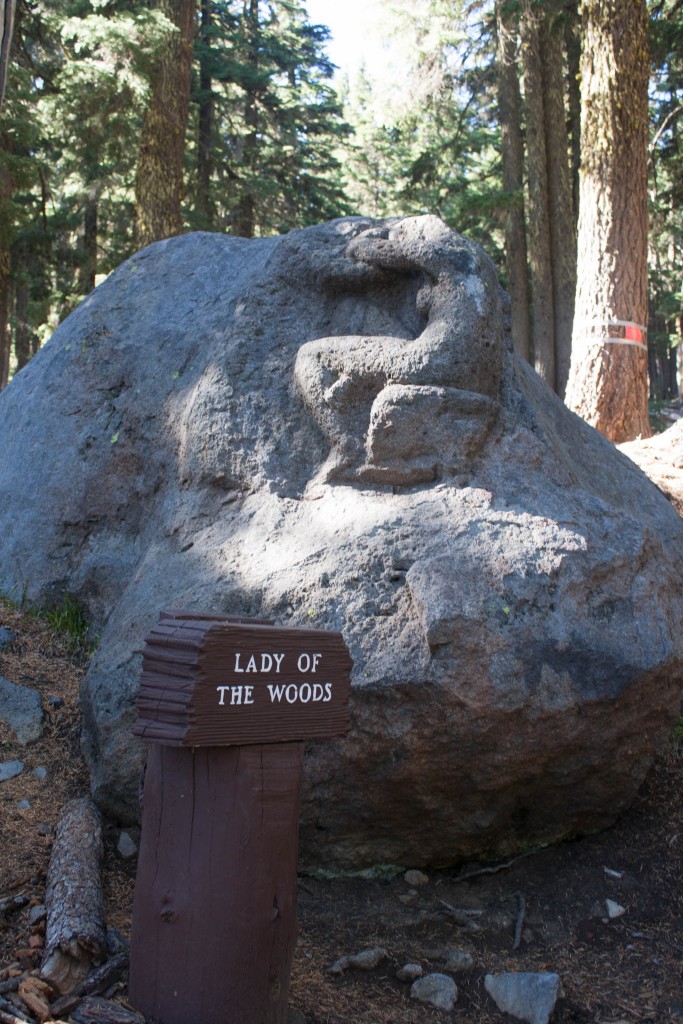 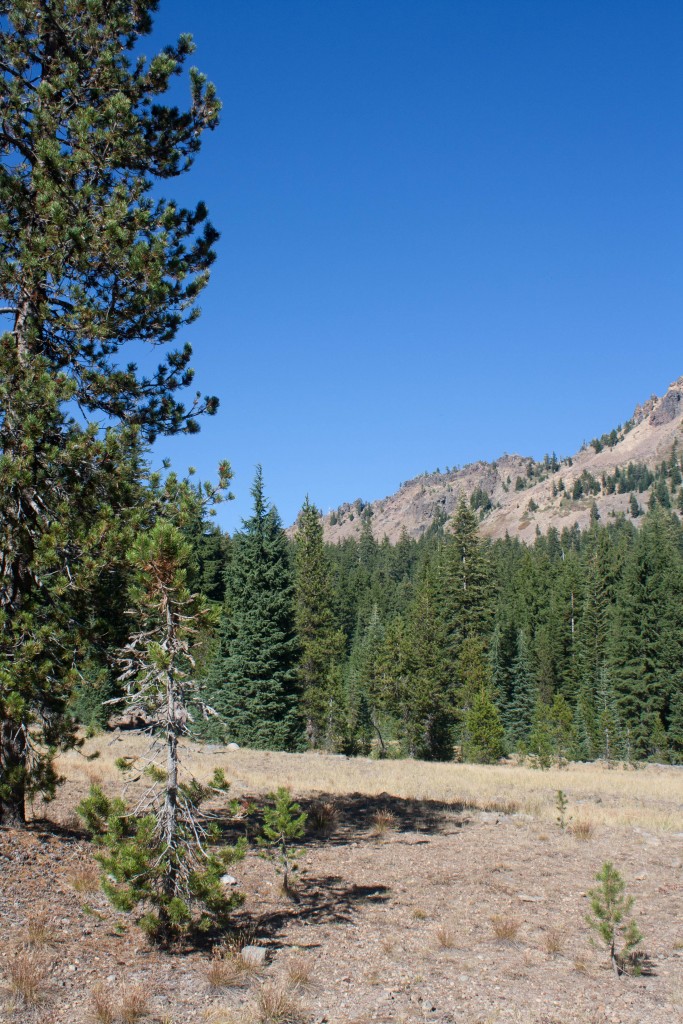 It was a nice, easy little hike with nice views. Next we went to another dog-friendly trail. 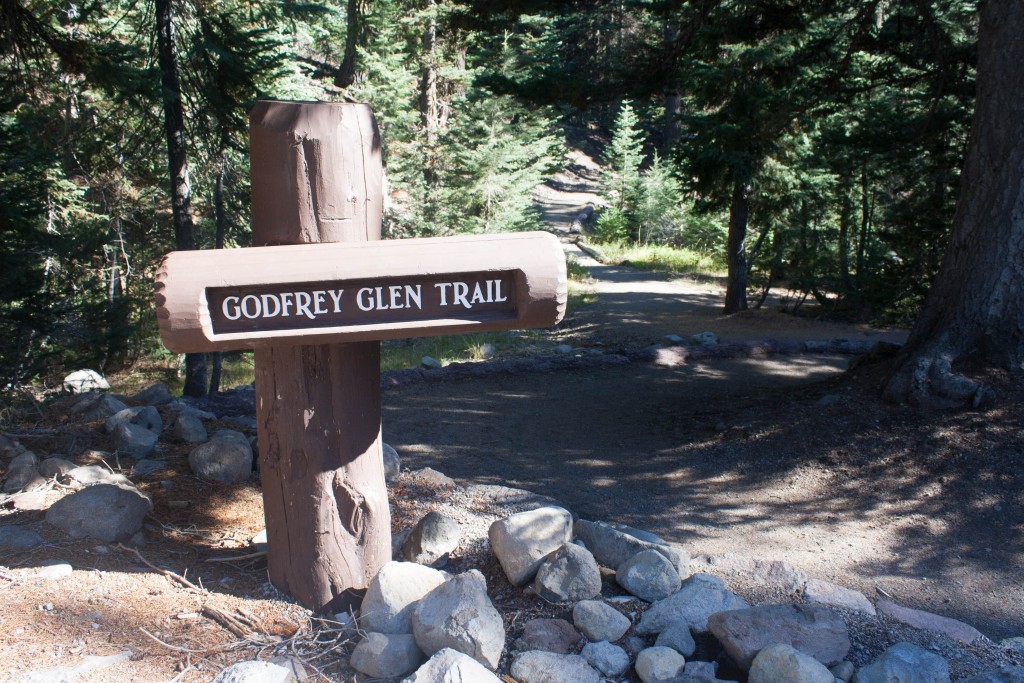 This one was a little over 1 mile, also a loop, and was named after William Godfrey, a park ranger who died in a blizzard in 1930. It was a lovely trail, pretty easy, through the woods and there were stunning views of the canyon with cool rock formations. 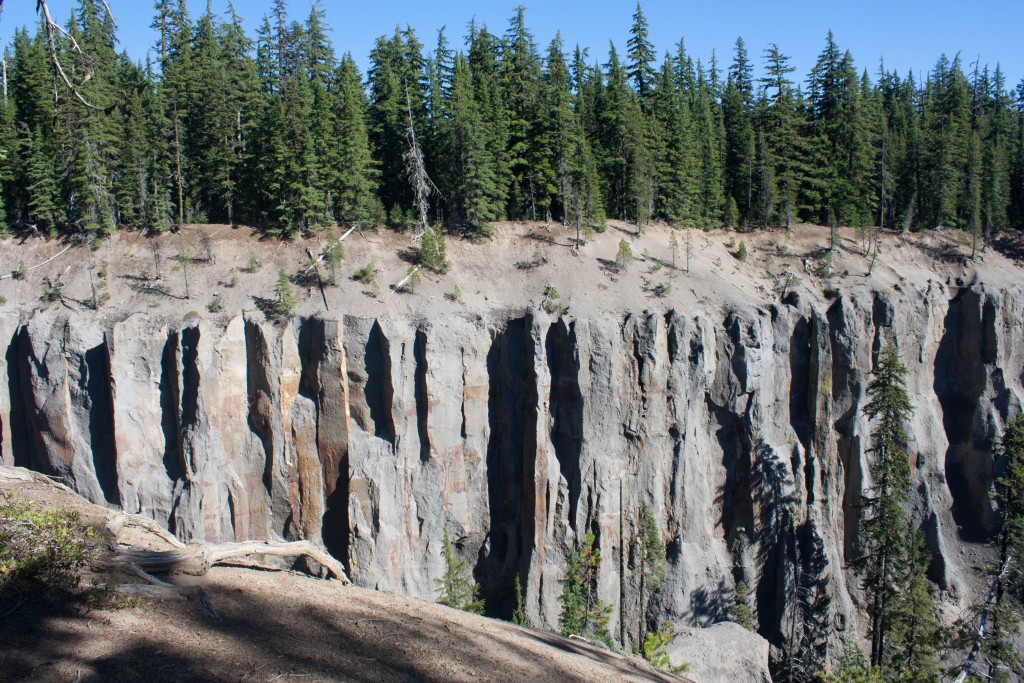 After our little hikes we hit the gift shop for some souvenirs and postcards and then made the trek back to the cabin. It was a lovely day! It cost $15 to get into the park and if you save your receipt you can get back into the park for 7 days after that. So save your receipt! I wish we’d been able to go back and do more exploring!