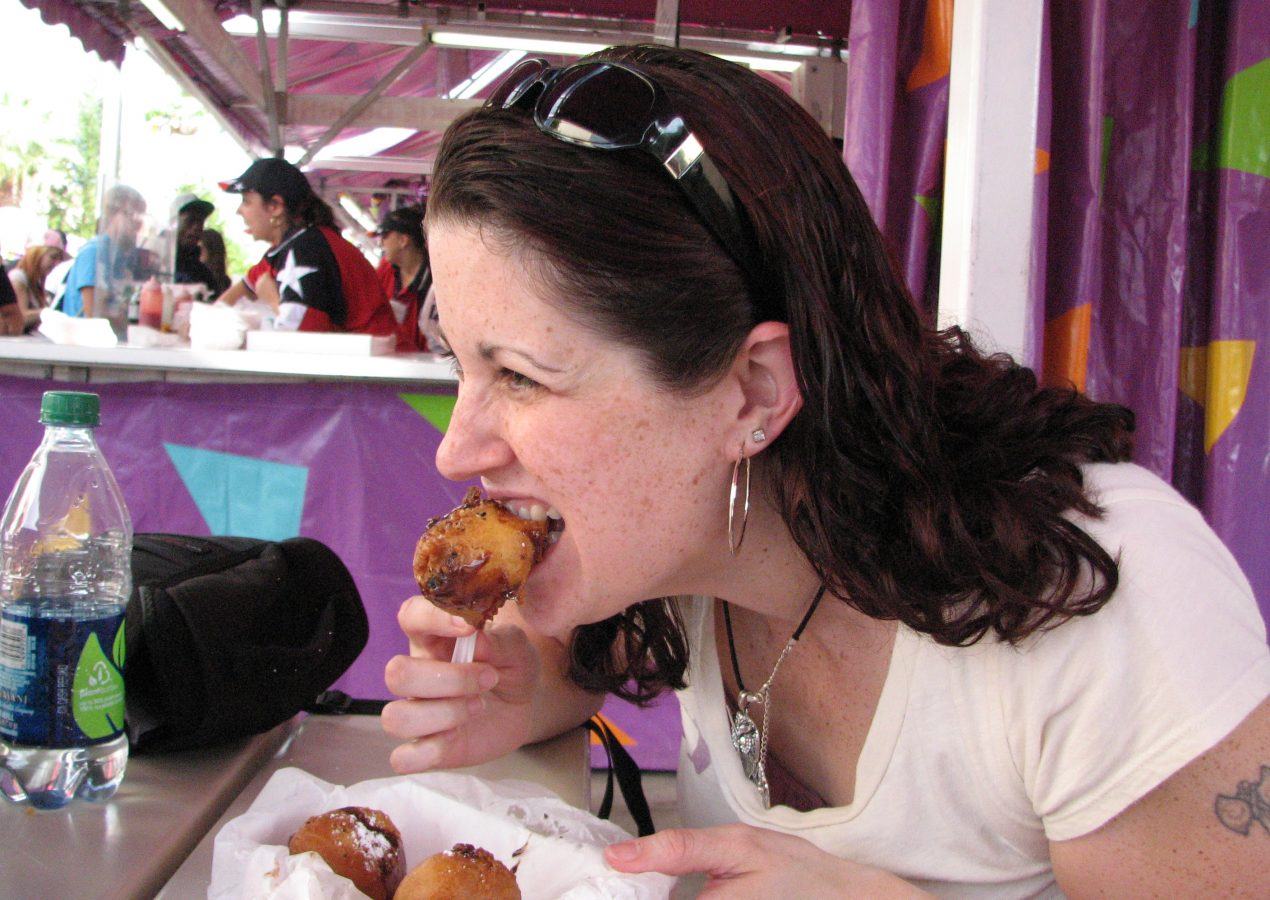 Monday morning I worked out at the YMCA. I would definitely need it for what the day had in store for me. The plan was to swim but the swim team was in the pool when I got there so I switched things up. I warmed up with a 10 minute run on the treadmill then I spent about 30 minutes sweating on the elliptical.

The YMCA was nice. I was upstairs overlooking the pool and kept checking for a free lane. One opened up and I hit the pool. I swam 50 lengths in about 30 minutes, feeling so good to be in the pool and then finished up. I liked changing my routine a bit. I might repeat this at home.

I was spending the day with Gayle, Michael’s stepmom. Next on the agenda: pick up Gayle’s daughter and best friend and then us girls headed to the Texas State Fair.

I was just along for the ride. I had no expectations and had no idea what to expect. Their tradition was to get a Fletcher’s Corny Dog as soon as they arrived so that’s what we did. The lines for the Fletcher’s Corny Dogs were really long but they moved fairly quickly. How the Fair works is that you buy coupons and use those to purchase things. I think my corn dog ended up costing about $6. Water was about $4!!

I have to admit, it was a freakin’ awesome corndog! I can’t remember the last time I had one. It was hot and I had to eat it slowly. Savoring it. 🙂

You can see Big Tex in the background. Apparently he talks too.

We walked around the Fair to see the sights. A little while later I got a Catfish Taco. It was small and absolutely delicious. I loved the spicy flavors. I’m not sure what sauce they used, maybe Chipotle, but it was to die for.

I would most definitely have another Catfish Taco. It was worth whatever calories were in it. (As you can guess, I wasn’t counting my calories that day!) We went to some museums and saw the history of Texas…complete with debutant dresses.

Next up: more food. Goodness! I should have worn sweat pants. 😛 This time they got a Fried PBJ Sandwich and I got Fried Cookie Dough.

I ate about 1.5 balls of the cookie dough and they ate the rest (thankfully). It was so rich and decadent. The outside was crunchy and the inside had the texture of a partially baked chocolate chip cookie. It was rich but not overly sweet. A girl behind me in line got the fried pineapple….mmmm.

I had one bite of their PBJ. It was just okay. Not something I’d want to eat much of. I’m sooo glad I worked out! I’ve never seen so much fried food in my entire life.

We saw the dog show–it was dobermans. The dogs were really cute! I liked the show. It was cheesy but cute and a nice way to pass the time.

I saw the prize-winning butter sculpture. Which was an impressive–and bizarre–piece of art. It was really big (I didn’t get a photo of the whole sculpture). If you love butter, there was also deep fried butter for purchase at a booth to eat. YUCK.

I liked the petty zoo, too. I just observed and chose not to “pet” but dang, baby animals are so adorable!

There was a lot of walking, which was good because of all the food we ate. It was really crowded, I guess a few schools were out for a holiday. I can see why the State Fair is so popular. It was a blast.

We finished up the day with their final tradition: getting the giant cinnamon roll with cream cheese vanilla frosting. I only had a few bites of it because I was kind of done eating the junk food.

It was a fun day and a unique experience I’ll probably never experience again. I did experience some food guilt after I got home. I felt like I for sure had gained weight from the food choices I made. I tried to resist going totally crazy and trying everything that appealed to me but it was hard. It was a once in a lifetime kind of experience, though, and I’ll probably never eat those foods again.

QUESTION: Have you ever been to the Texas State Fair? What was the craziest food you’ve eaten?