Before heading out the door, I drank half of my Atkin’s Protein Shake. Friday’s run was brutal for many reasons. First, I set out to just run the track near my house. 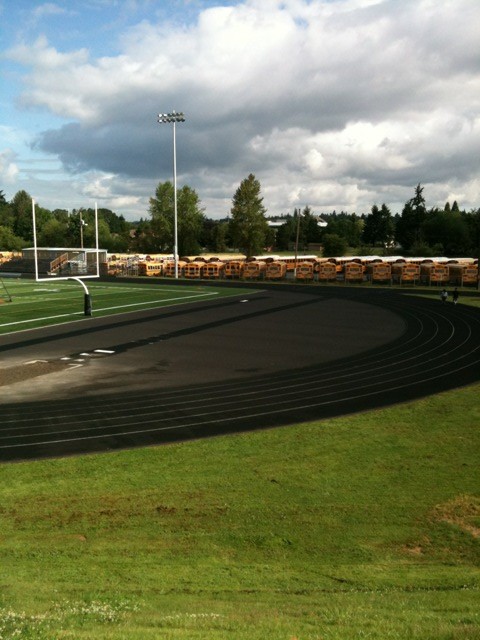 I ran the half mile there and saw that it was overrun with girls playing soccer. Change of plans. I decided to just run the neighborhood, which happens to be all hills. Seriously–you go up a huge hill and at the top of the hill is another hill. 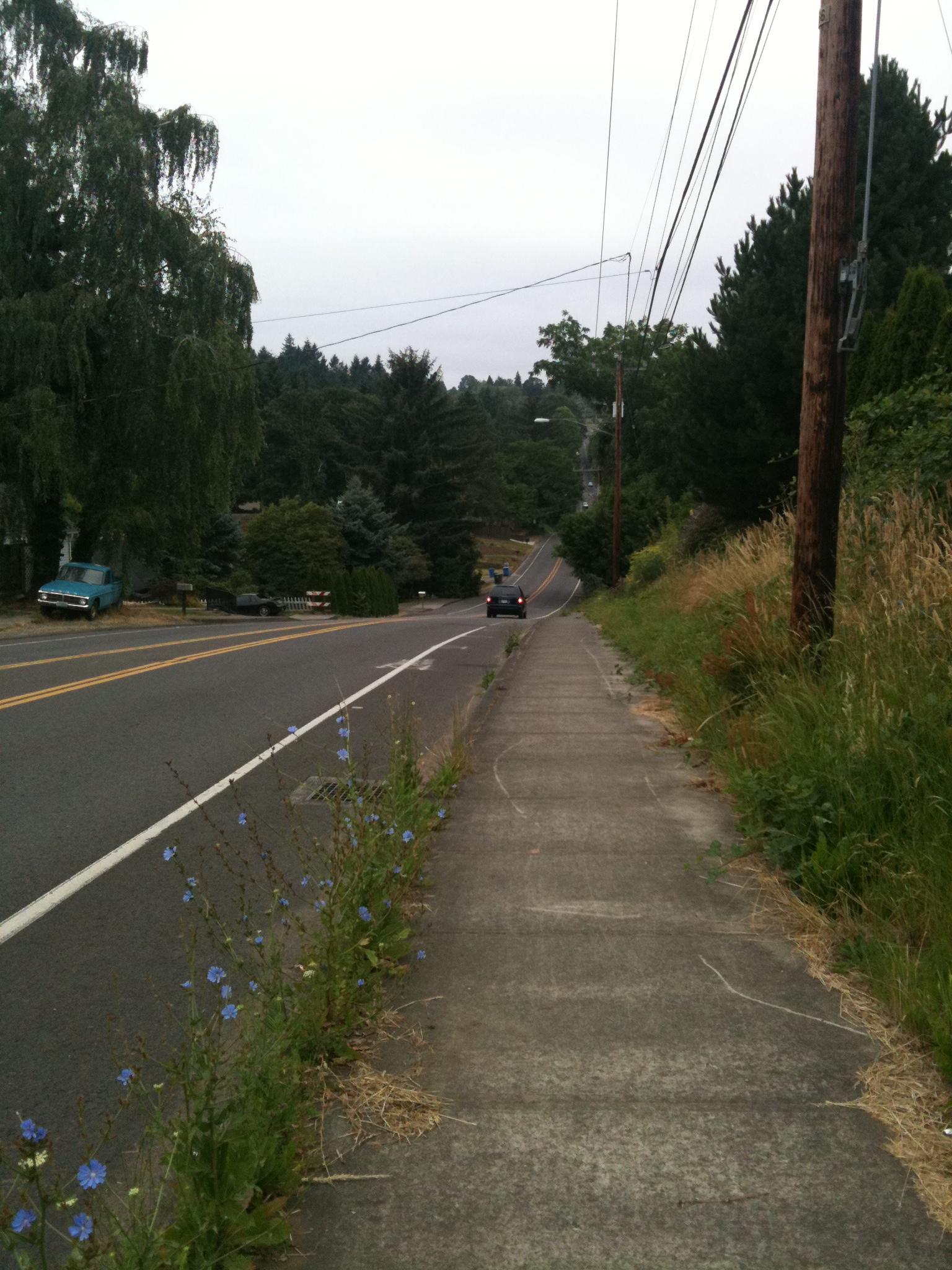 None of the pictures will do these hills justice because seriously, I ran up a mountain Friday morning. 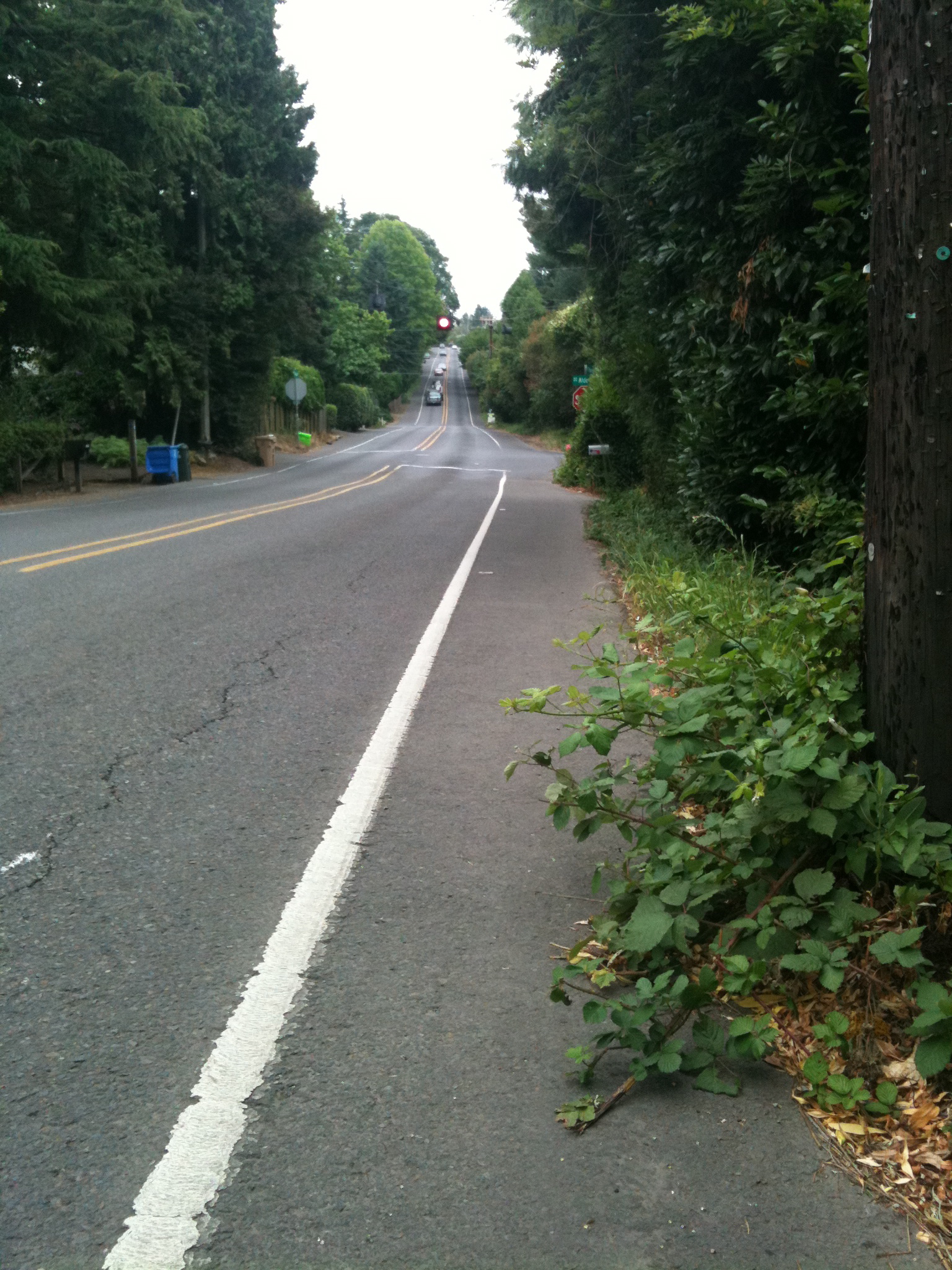 The first 3 miles or so of my run were really good (and relatively flat). Then I came to the Mountain in my neighborhood. The view going down the mountain: 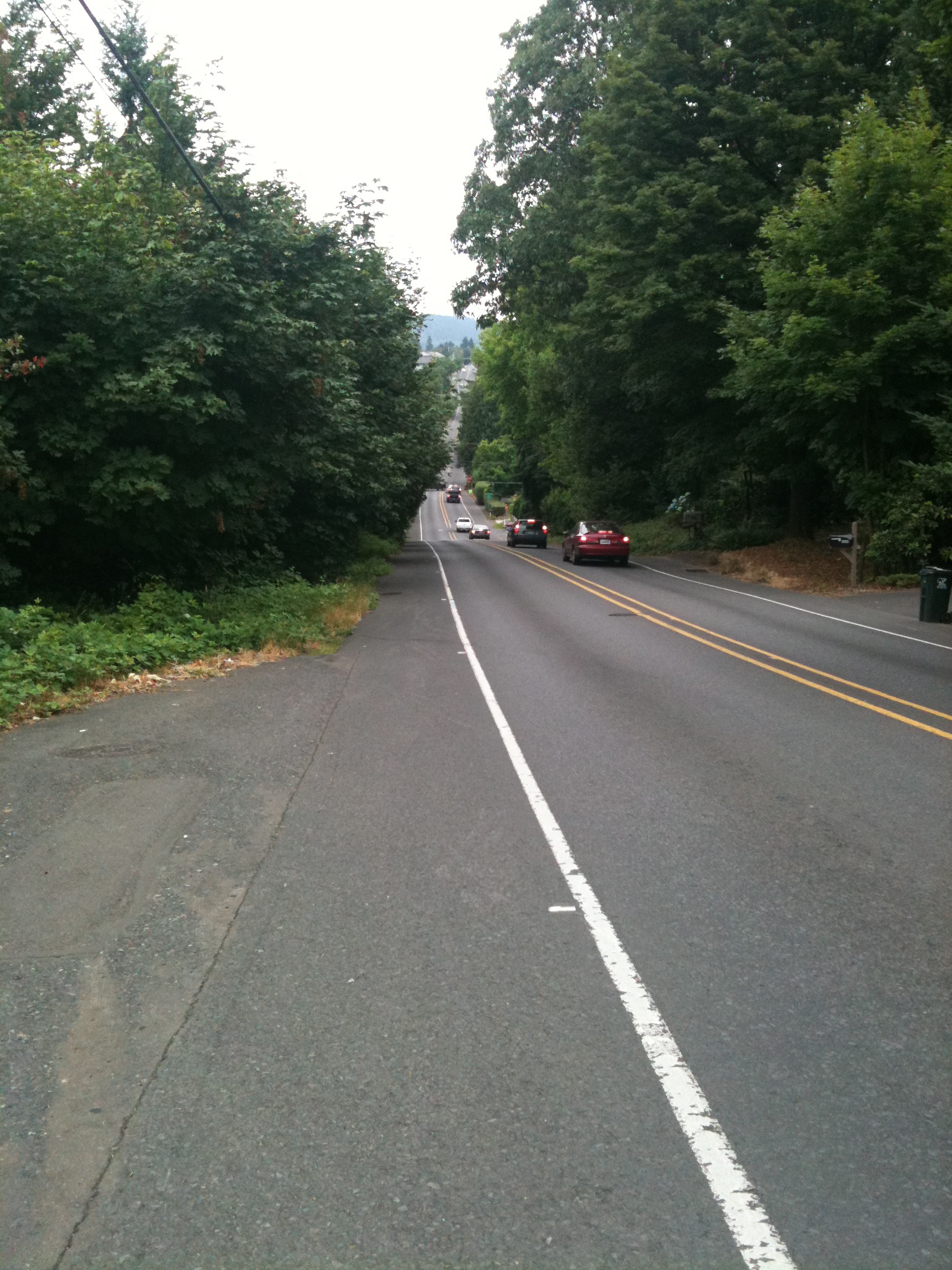 I basically ran up the mountain on my tip-toes. To be honest about halfway up the hill, it because a run/walk for pretty much the rest of my run. I was spent. I continued the route I used to do and found that I was walking  more than I was running. 🙁 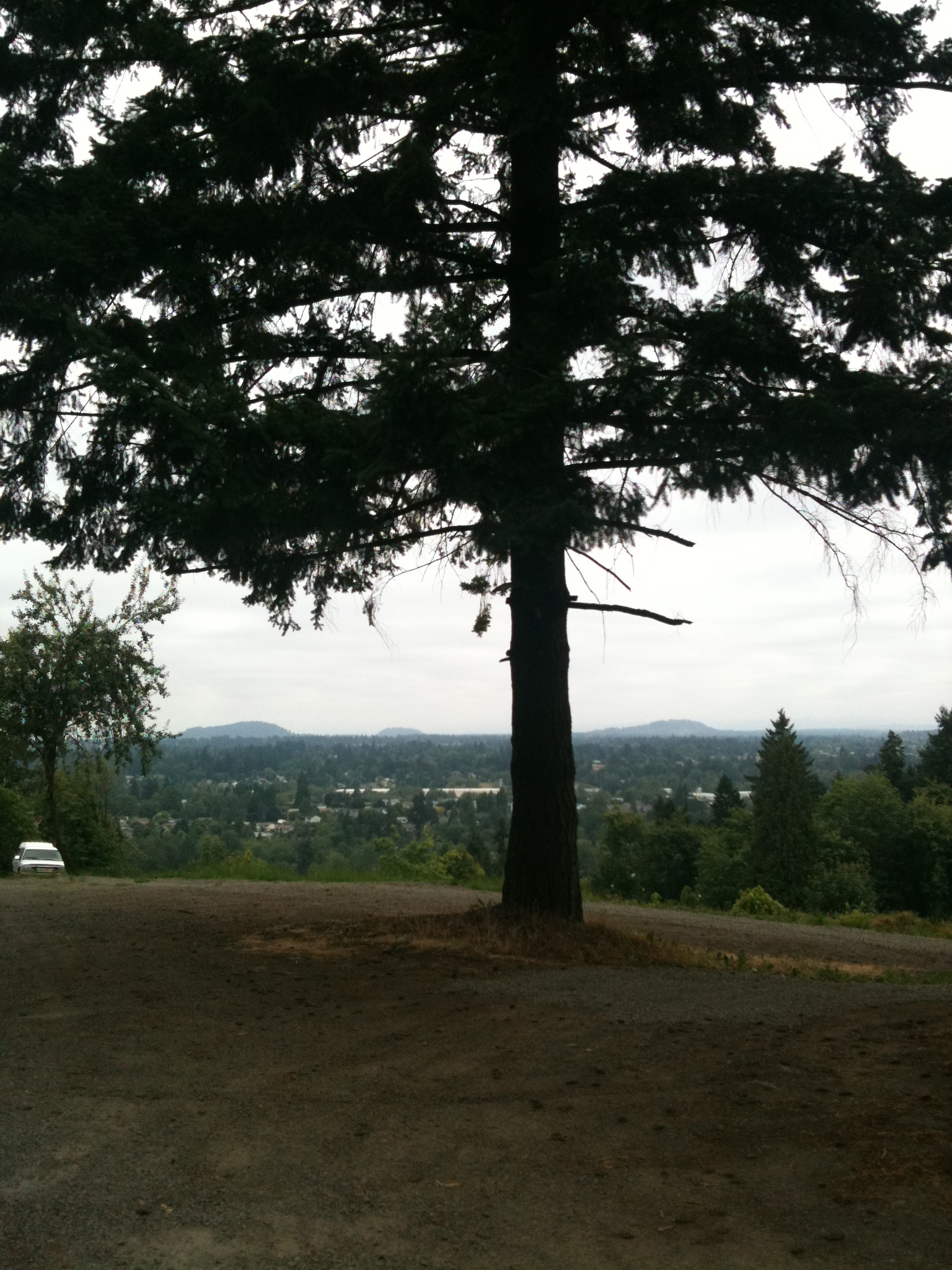 I kept going and tried to run as much as I could. I hadn’t realized how much work hills are. It had been months since I ran the crazy hills in my neighborhood because of a few injuries. I realized yesterday that my conditioning for hills is not what it used to be.

I took my hand-held water bottle with me (thankfully) but ran out of water. That last hilly stretch my thoughts were consumed with finding water. I saw people with sprinklers going in their yards…I thought, “Would anyone notice if I crept into their yard to get some water??” Hmm….I kept thinking that as I passed by house after house. I decided that was weird. 🙂 I pictured the “Jack Ass Shows” where they crept into stranger’s yards and did weird things. I couldn’t be THAT GUY.

I eventually decided to just go up to an empty church and turn on their spicket to get water! I was desperate! I realized that the church spicket was LOCKED! Boo. I suffered the rest of the way home and downed two glasses of water and the rest of my Atkin’s Shake. 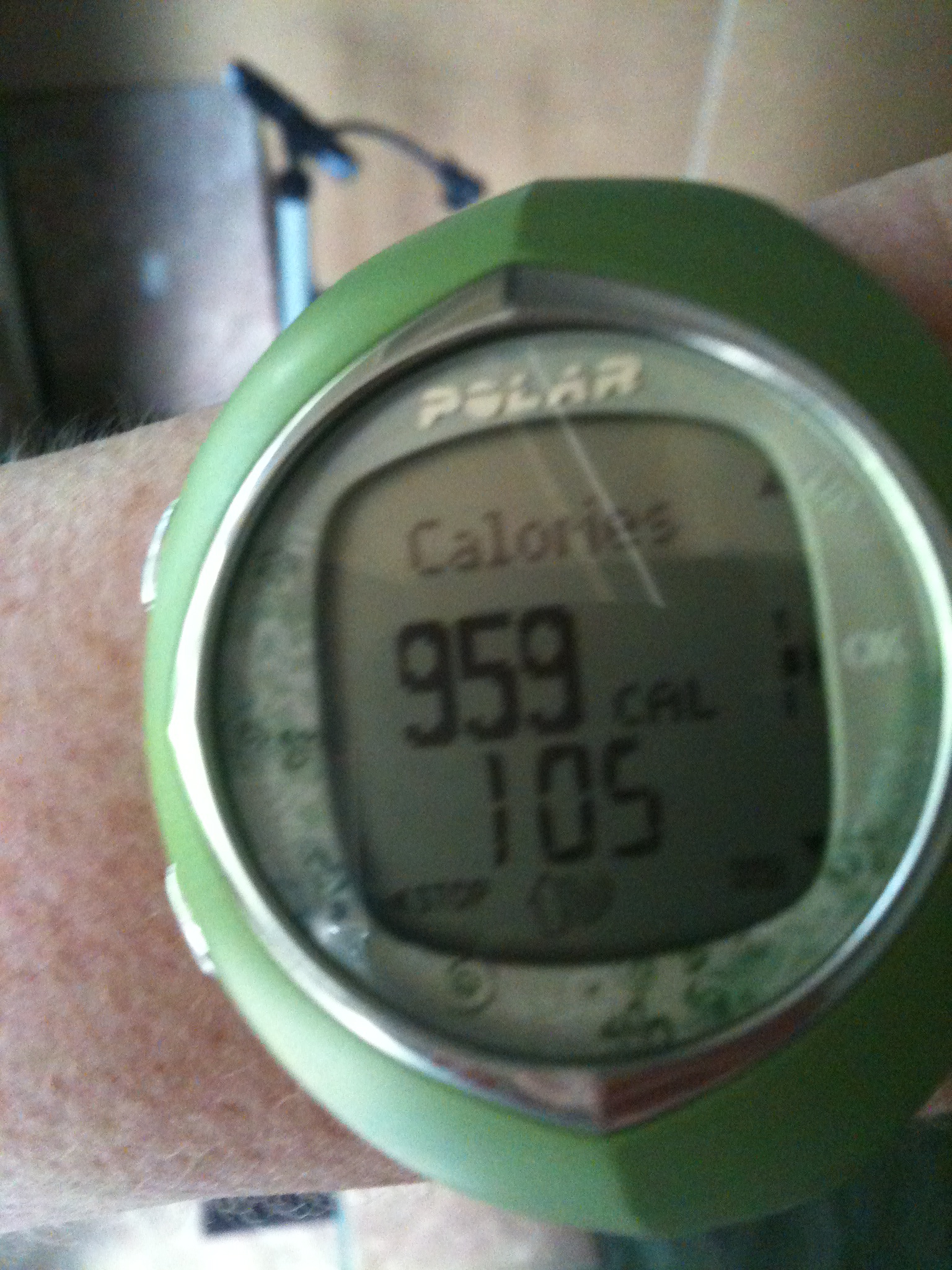 I stretched and used my Foam Roller immediately. The last mile of the run my left ankle had started to hurt so I walked that last mile as my cool-down instead. I was really worried about my ankle. I was also feeling dizzy and nauseous. Too few calories for a too long run! I hadn’t prepared to do a long run, and I definitely hadn’t prepared to do the crazy hills. After my stretching I ate a GU to help my recovery.

Not a horrible run, but definitely not my best as of late!

I also discovered around mile 1 of my run that my Nike+ was dead. 🙁 It wasn’t tracking my pace or mileage AT ALL. I was really irritated with that. So after my shower, I hopped in the car and drove the exact route to figure out my mileage.

I woke up Sunday morning feeling like a million bucks! I had no idea what to expect after Reach the Beach. Would I be sore? Would I be crippled? Would I have to spend the day in bed? Nope! I woke up feeling absolutely refreshed and not sore at all! I was shocked. I made us breakfast of scrambled eggs, turkey sausage and toast. I used Dave’s Killer Bread (which is now my new obsession):

It tastes so much better than any other bread I’ve had.

After breakfast, I headed to the pool to stretch my legs. It felt great to swim. I was wondering if my tightness/soreness would show up when I started to swim but it didn’t! I didn’t feel any soreness. I also swam as fast as I’ve ever swam with ease. I was confused. I thought I’d be a wreck after RTB. After swimming, I sat in the hot tub for awhile and relaxed. It felt wonderful. Once I got home, I worked on organizing and labeling all the pictures from Reach the Beach and started to write Recap 1 and Recap 2.

Michael got on the bike trainer for 15 minutes and did an easy recovery ride to loosen up his legs. He was feeling pretty sore. Poor guy! Sunday afternoon we took off and went to Pizza Schmizza for lunch. I was famished! I got a slice of the “Don Ho” aka Hawaiian pizza, and a pepperoni slice with peppers, onions and olives. 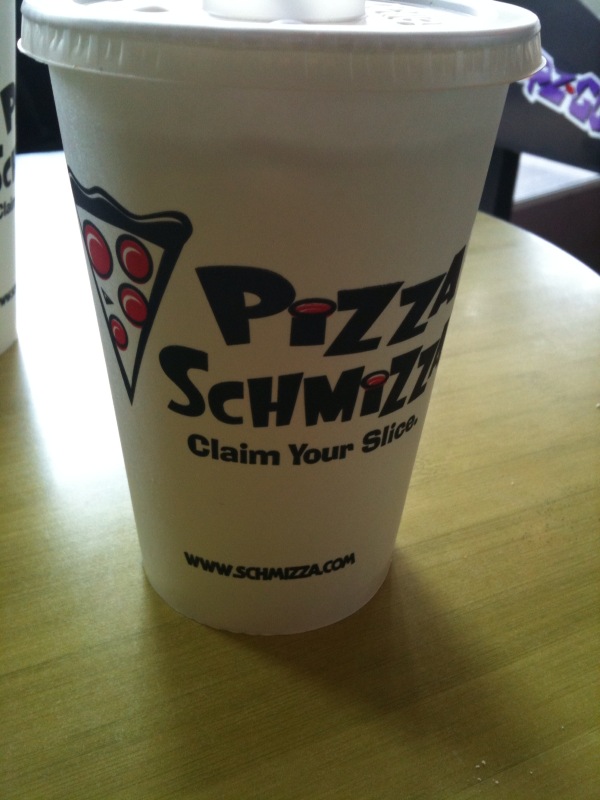 I only had a few bites of the second slice and decided to save it. We headed to the theatre to see Ironman 2! It was pretty good. Dinner last night was the leftover pizza slice and 1 beer.

I also steamed some veggies and topped them with a little Goddess dressing. 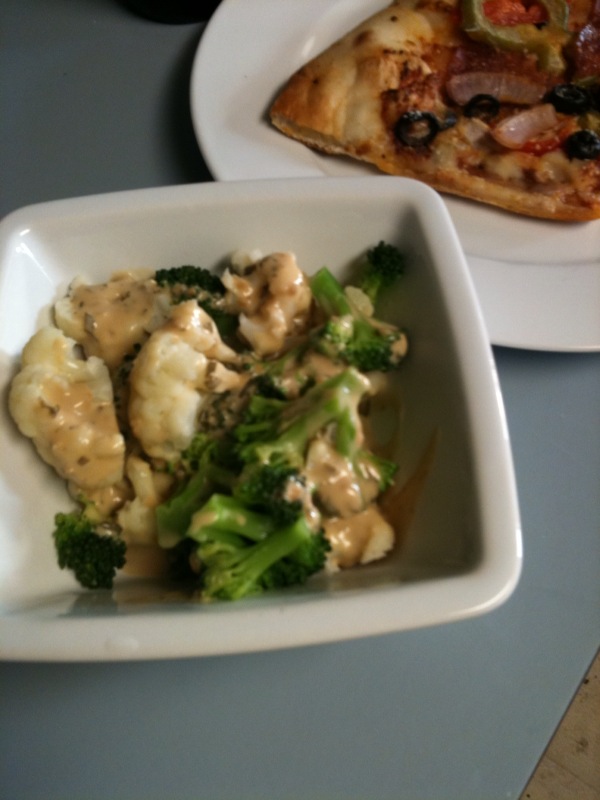 The rest of Sunday was pretty low-key. We got caught up on some TV shows and relaxed. It was a good day!

UPDATE: I forgot to mention that when we got home on Saturday night from Reach the Beach, we both used the Foam Roller. I also used it Sunday too. It made a WORLD of difference!