So remember when I said I’d been having foot pain? The doctor determined that I had somehow bruised the bones in my feet. She recommended I get some good inserts that have arch support. I usually walk around in old running shoes that I’ve retired from running in. They have a lot of support and cushion (I get new running shoes 2x a year–they recommend you replace your running shoes every 500 miles, which I don’t usually run before switching but 2x a year seems to work well for me).

I ordered a pair of fairly expensive inserts for my shoes per the doctor. I gave them a try for almost a week and hated them. Next, I decided to give a Dr. Scholl’s cheaper option a try and it worked so much better for me. I got the ones that are specifically for athletic shoes. They feel so comfortable and give me much better support and were so much better than the first thing I tried.

The foot issue seemed to get better, unfortunately my back was out of whack. I have no idea why or what happened. It’s not like I did something weird in the gym and felt an instant “oh shit, that hurt” injury. It just kind of happened. It’s entirely possible that having weird foot pain for a month and a half lead me to walk in a weird way and that threw things off. I’ve never really had back pain before, just the usually “I lifted heavy in the gym and I’m tight and sore” so I didn’t really know what to do.

I saw my doc, again, and she said it was inflammation in my sacrum. In the photo below where it’s red, that’s exactly where it hurts on my body. It’s the muscle, though, not the bones/joint. In the beginning it felt like a giant lump. 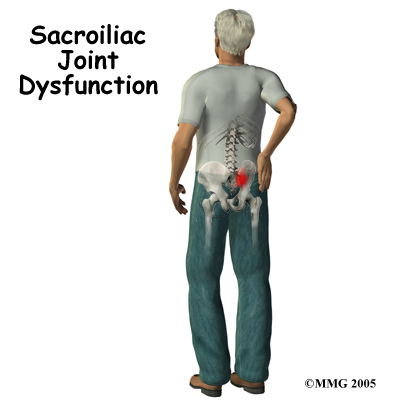 Thankfully it’s not effecting my hips or legs. Just my very low back/glutes. It’s odd–I have no idea why it’s inflammed and cranky but it freakin’ hurts. She recommended ibuprofen, icing it and physical therapy. She said I could do whatever I wanted in the gym, as long as it didn’t hurt. I’d told her that certain poses in yoga hurt really bad (downward dog specifically) but everything else seemed ok.

The next week I was feeling a little better. It was still there but I could move around without pain–it mostly just annoying and uncomfortable. I added back more weight lifting and flared it up again. It was bad. I can’t pinpoint which activity aggravated it because I took it pretty easy and was trying to be gentle with my body.

Either way, it’s time to rest. I have a physical therapy appointment coming up and I decided to give chiro a try. I’ve never been a huge advocate for it. I tried it a few times years ago after a car accident and always left feeling worse than when I went in. In terms of healing an injury I lean more towards massage, maybe acupuncture, yoga and physical therapy exercises. But I was feeling desperate and wanted to try it again. Maybe the experience would be better this time around. After watching Michael suffer in excruciating back pain for years, I was freaking out and wanted stay on top of this before it became chronic. 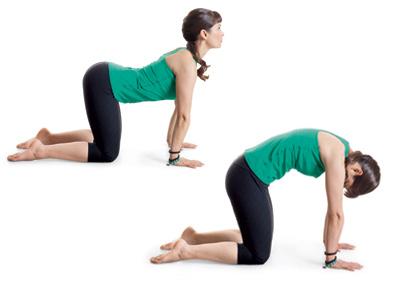 I think resting and icing is going to be my best bet and I’m crossing my fingers it’s a short lived injury.

I went to the guy that Michael goes to and has recommended to me before all this. He did an exam to test my spine and see what was going on. He determined it was the SI joint and L4, which are apparently connected and it’s common when one is inflamed the other is. 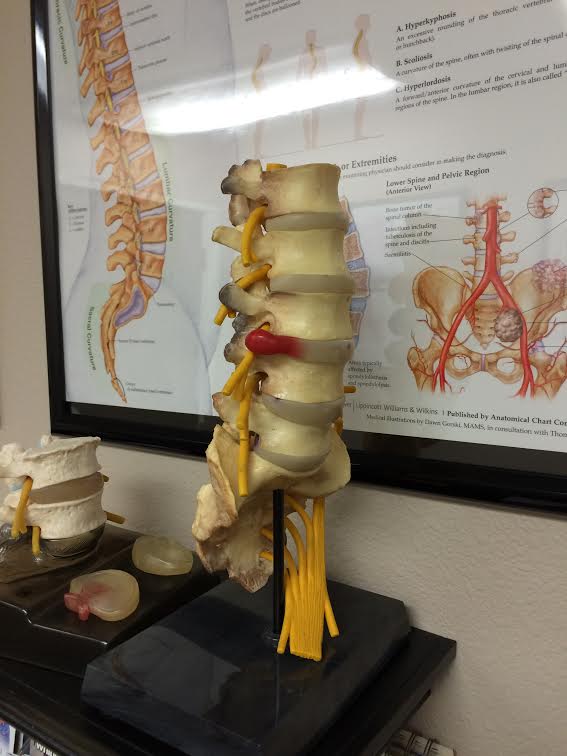 Next he had me spend some time on a massaging table. They hooked up my back to the TENS device and I laid down on a heating pad then they turned the massage table on that rolled up and down my spine. It felt magnificent! I want one of these things at home. 🙂 I think I was on the table for about 20-25 minutes. Then he put me on this chair face down that moved up and down, bending my body in a slow, methodical way as he massaged the area. Finally, he adjusted me. It was a little scary and creepy at first but I felt a little better as soon as it was done.

I have to say I didn’t really enjoy hearing my spine pop. It felt good way down below near the pain, but higher up the spine and the neck? Creepy! He said it would probably take 3-4 visits for me to get better but he was optimistic.

The next day I felt a lot better but not “cured”. The pain was a little different than it was previously. I’d slept really well and didn’t have back pain when I tossed and turned in bed like I had been experiencing for the last two weeks. That alone was improvement! I was still sore and tight though.

He said that I could do some exercising, he said swimming would be the best thing, elliptical second best. He suggested I skip yoga for a few weeks and give running a break for a few days (because of the impact). He said I could lift weights, basically if it doesn’t hurt it’s ok. I wanted to give my back a break the weights, though, so I was okay with not doing that. He said that just laying on the couch while I heal is not the best idea, so that was good!

Monday was supposed to be a rest day for me. On the way home from work Michael mentioned that he might go for a run. What? Go for a run?! He’s not a runner! He ran with me in Hawaii on our honeymoon, which was amazing and one of my favorite honeymoon memories, but it’s never his first choice activity.

The rain had started, and will most likely keep going until summer at this point. No joke, the rain starts in February and ends around July 5th. I hate the rain. But Monday night the rain had stopped, the sun was out, the weather was nearing 60 degrees. Plus, the evenings are lighter again so by the time we got home from work the sun was still out! I decided to switch my rest day to Tuesday and go for a run/walk with my husband instead!

We decided to put the dog/baby gate thing back up in the hallway (which I was a little bummed about because I was enjoying our super big hallway sans gate since we took it down awhile ago) because we wanted to experiment with leaving Bella out to free-roam the house. We were only going to be gone for about 30-45 minutes tops so I figured it was a good time for her first try. 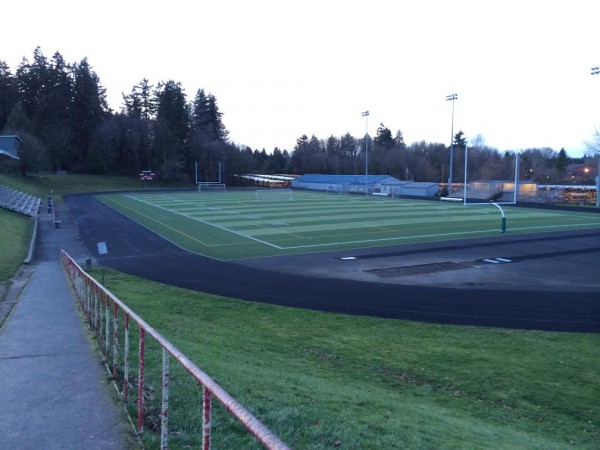 We walked/jogged down to the neighborhood track and happily found it empty. We started out at a slow jog/run as we warmed up. Here is Michael turning on all his gadgets before we got started running: 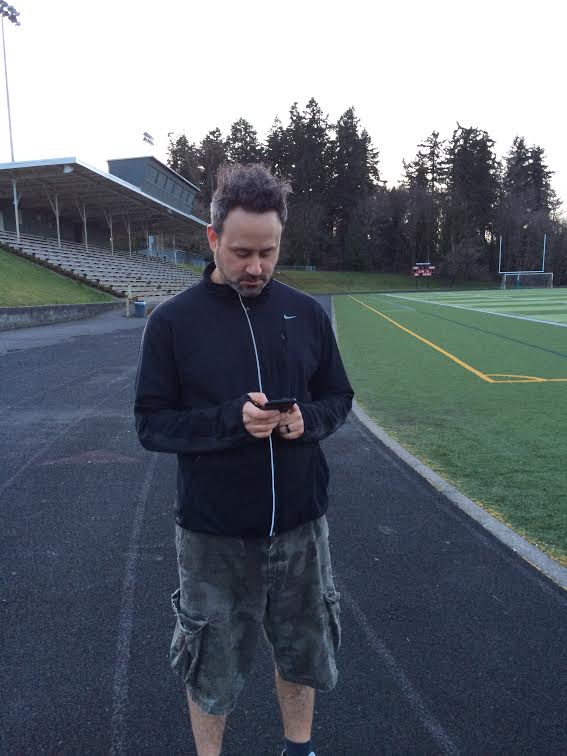 It was really nice that we could run together. It’s something I love to do and it makes me excited that Michael may want to get into it. He said he wants to diversify his fitness this year. That’s his goal. He bikes to work, does kettlebell workouts at home and that’s it. I think the more cross-training someone can do the better. Use different muscles! Move your body in new ways. The only downside to having a really diverse fitness routine is that you never get REALLY GOOD at one thing. But the upside outweighs that I think. Neither of us are striving to be Olympic athletes… 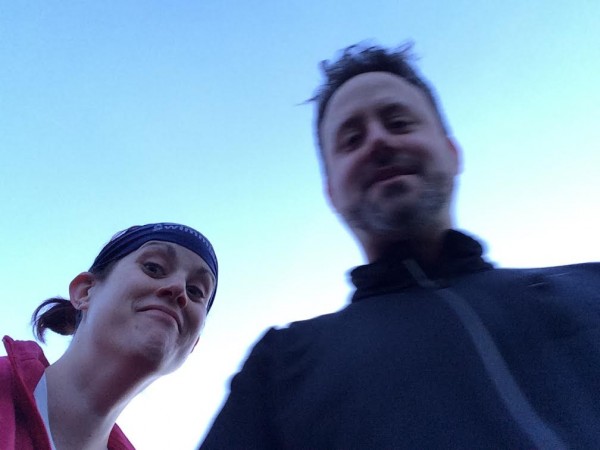 Since Michael isn’t a runner, we did a lot of walking. The routine we got down was running the straights and then walking the curves of the track. I think that was a good thing for a newbie runner. I think Michael did about a mile and a half. Then I did some running on my own while he walked the track. Finally, I remembered that Bella was running free and loose in the house and started to get some anxiety about that so we turned back and walked back to the house. 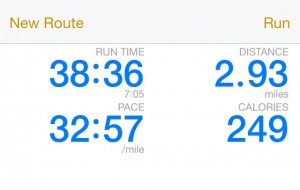 We did about 2.5 miles total (including the walk to and from the track). We got back to the house, the sun had set and it was getting dark by this time, and Bella was sitting pretty in the window waiting for us! She saw us and then took off, running through the house to greet us at the door. She hopped and jumped around all excited (and spazzy) and then flopped down on the floor for belly rubs. 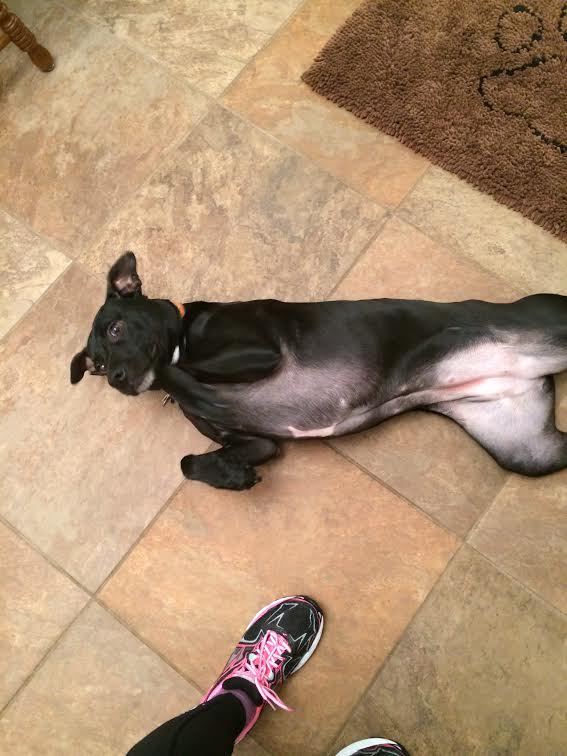 Next, review the house. I took a minute to look around and see if she got into anything. Thankfully she didn’t! I think she sat at the window waiting for us the whole time! No mischief like the first time she was left out, or the second time when I got home after she’d been left out and she had destroyed the living room….

I was so proud of my girl! She’s growing up. She’s getting more mature and well-behaved. I think we’ll continue to let her roam free for periodic errands we have to run, etc. The gate is back up so that the cats have a chance to run away and hide if things get stressful for them. I don’t think Bella really bugs them but you never know. My number one concern is keeping the cats safe from a curious and frisky puppy. 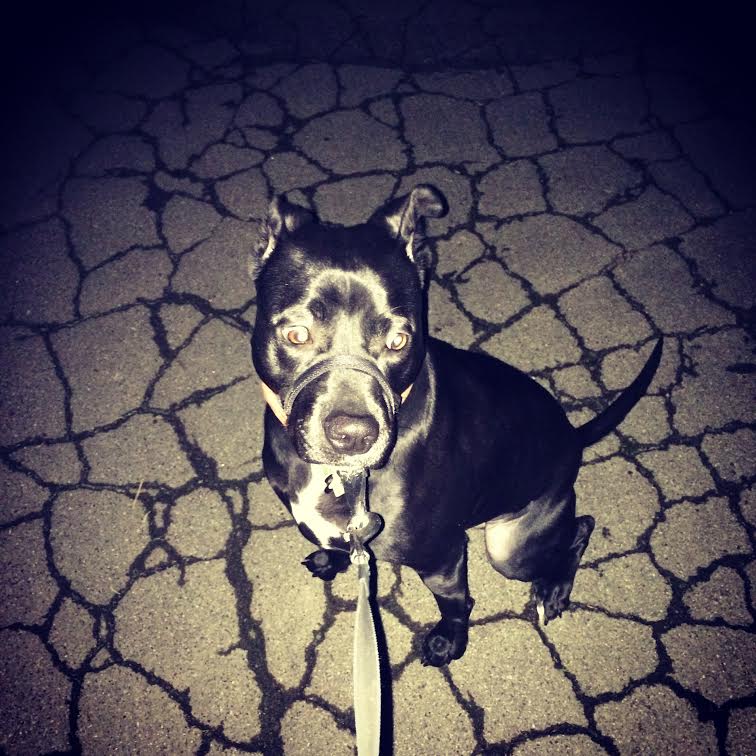 I took Bella for a walk in the neighborhood, although it was now really dark out. We didn’t walk a ton, but a little bit and I used that as my “cool down” from the run. I ran about 2.5 miles total but with the walk it came to 2.93 miles total. 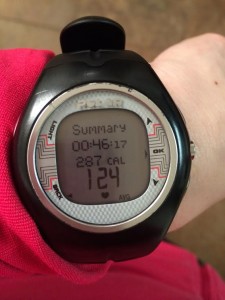 It was a nice run and I was glad I changed my rest day so we could run together and enjoy the nice winter evening. Anytime I can get a workout in without having to go to the busy, crowded gym is a good a time! My knees felt good and I was a little sore the next day but it wasn’t too bad. Michael seems to be doing well, too. Hopefully we can run again in the future!