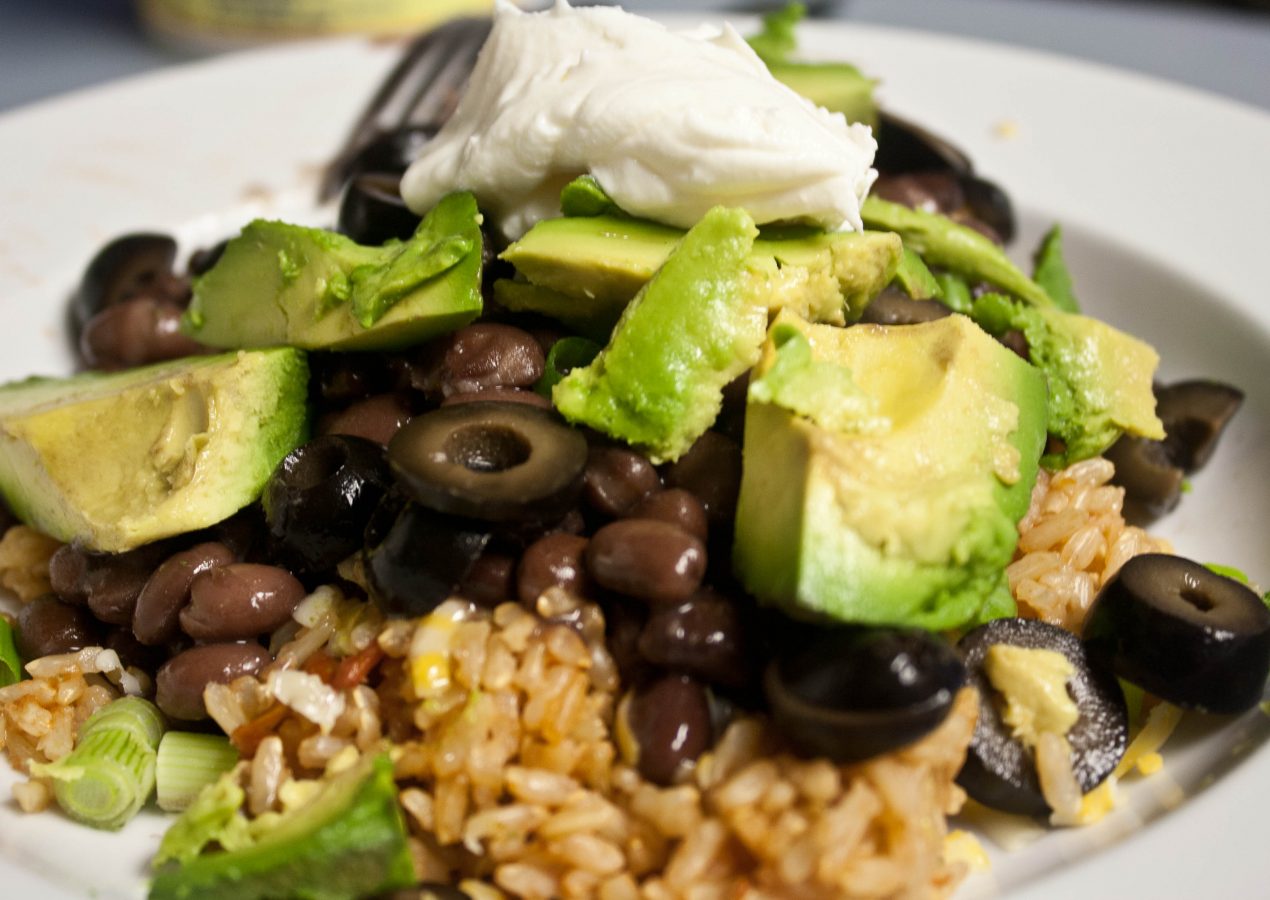 It’s a shame I’m not more adventurous when I’m eating for one, but I’m just not. When Michael has plans with friends and I’m on my own for dinner I tend to choose meals that are easy and simple. I tend to go for the “Big Salad” meal as my stand-by. It’s just a “throw whatever is in the fridge onto some lettuce” kind of dinner. I can get pretty creative with my salads. The Big Salad creation was a staple when I lived alone.

Here are some of my latest “meals for one” creations:

I squeezed out the fluid from the can of stewed tomatoes and it didn’t give much liquid (about half a cup). I needed 2.5 cups of fluid for the rice. So I mixed in some plain water as well as dumping in the tomatoes. I figured any of the extra fluid the rice needed would come from the tomatoes cooking down.

When the rice was done, I topped it with seasoned black beans, a little bit of shredded cheese, half an avocado, sour cream and sliced black olives. I would have added some salsa but we were out.

The combination of carbs and fiber fill you up like you wouldn’t believe. I was stuffed! It was definitely enough dinner for one person and I had a ton of leftover rice for lunches.

I’m also eating breakfast on my own most mornings now. I do kind of miss sharing our breakfast together. I was getting a bit burned out on eggs but I recently did two different breakfasts that I really liked a lot. I did not take any photos because mornings are rushed enough as it is!

The first breakfast was 2 scrambled eggs, black beans and a dollop of sour cream. But this time I added half an avocado sliced up on top. It was the leftover half from my Mexican bowl dinner the night before. I LOVED adding avocado to my scramble! It was such a great flavor. Making scrambled eggs Mexican with beans and salsa really freshen up the breakfast.

The next day, I did 2 scrambled eggs with black beans and cottage cheese on the side. This was another breakfast that I loved. I wanted to add some protein and the cottage cheese went great with this dish.

Breakfast for dinner is ALWAYS a good idea when making “dinner for one”! It’s so easy! I’ve been known to have a bowl of cereal and toast for dinner….ahem….. 😉 Recently I decided to try breakfast for dinner because it was easy and I didn’t really feel like doing much else. Don’t you hate that when nothing sounds appealing?

First, I cooked down some fresh kale in the skillet. I used some grapeseed oil and then added a splash of chicken broth. When the kale was cooked, I added two eggs into the skillet and scrambled them up. I mixed in the kale and added some feta cheese to it.

I added some black beans to it and had a side of seedless red grapes as well.

I liked the scramble a lot. The feta cheese was really mild (maybe I just didn’t add enough) and the kale was nice in the eggs–kind of like cooked spinach. The meal was filling because of the protein in the eggs and the fiber in the beans. Easy!

QUESTION: What are your favorite “cooking for one” type meals?