Ever since I lost 100 pounds and kept it off for a few years, I’ve been able to keep a pretty good handle on my depression and anxiety. Even this year, with the intense stress Michael and I have been under with his job loss, I still had a handle on it. I’ve used exercise as a “cure”…or is a bandaid?…whenever I was feeling the little nibbling feelings of depression or stress starting to get to me. Nothing cures a shitty mood like a REALLY GOOD RUN. Seriously. I cannot count how many times a run helped me get through something tough. Swimming is my home. It calms me, it relaxes me, it makes me marvel at how far I’ve come from the old me. 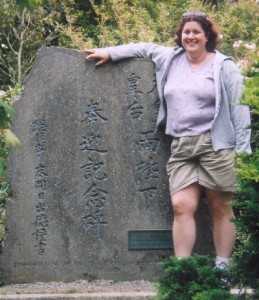 Whenever I have an injury that sidelines me, it’s so much harder to keep those moody feelings at bay. With my recent bout with runner’s knee, I’ve been limited in the things I can do. While I’ve been here before and survived it and even learned a valuable lesson from it, it’s very very hard to SEE the positive side when you’re right in the middle of it.

I feel helpless. I feel anxious. I feel achy and tired. I feel out of sorts. It’s easy to get wrapped up in my brain and focus entirely on my knees instead of seeing the world around me. Nope, I don’t see the beautiful changing leaves or the cute puppy running with it’s owner–instead I keep analyzing every ache and twinge in my knees, I have an internal debate (“will my knees hold up if I run for that bus or should I just wait for the next one?”) and I watching longingly at that runner wishing it was me.

The hard part is that people don’t really understand what it feels like. No one understands what that fear is–the fear of possibly gaining back all the weight I lost because of an injury. For the most part, I feel great about my body and my life and my maintenance. I don’t think about gaining the weight back. I don’t worry about being 100 pounds heavier because I KNOW I won’t let that happen. But right in the middle of this current injury? Yeah, I’m worried about it.

Michael is sweet. So is my mom and some of my friends. They tell me it will be okay, that it’s ok to take a break from intense exercise, that physical therapy will help me, that I won’t be injured forever (okay I can be a little dramatic when I’m not feeling well).But they just don’t understand. That fear.

I went to happy hour with a friend who has lost 60 pounds and is also currently dealing with an injury. She was in a car accident and got whip lash which has her crippled and barely able to move her neck. She was a cyclist too, and had to drop out of the Harvest Century a few weeks ago because of her injury. She listened to me whine about my injury and my knees and the fears I was having gushed out of me like a surging river. And she understood. She nodded and agreed and knew how I was feeling. She was feeling the same thing. She said that unless someone has spent a long period of time obese or overweight and then lost the weight, they really don’t understand that fear.

It was nice to hear that someone else felt the same way. It made me feel better. It gave me a little hope and made me feel stronger, determined, ready to tackle physical therapy and do whatever it takes to be healthy again. Will I be 100% better? Who knows. Probably not. Will I have to redefine what kind of physical activity makes me happy? Probably. Maybe I need to drop one intense workout day from my schedule and replace it with a yoga class. Every week. No matter what. Who knows. Only time will tell. What I don’t want to do is make it worse.

I bring this up because I do want to share my life with you guys. I realize that with my injury my blog has probably suffered a bit. I honestly have not been feeling inspired. I’ve opened up dozens of blank posts, ready to write, and then closed them because words just weren’t coming. Right now my brain feels foggy, my body hurts and I just don’t know what to say without being Debbie Downer.

I went to my first physical therapy appointment to get the verdict. After my thorough exam, I asked on a scale of 1-10 how bad was I compared to the really bad cases of Runner’s Knee? He said about a 5. I guess that’s good. I’m past the inflammation part and ready to start the physical therapy exercises to get better.

So what’s the verdict?

Both knees have a lateral tilt which means my knee cap is tilted. This condition is also what the IT Band is related to. So if there is inflammation in my IT Band, it can pull the knee cap and cause inflammation there. My left knee also has an internal rotation which then effects the lower leg bone positioning. Basically, I was born this way.

At least I now know why I’ve had knee issues with running and hiking. And now I have a nifty knee brace and a bunch of physical therapy exercises to work on. I will be doing them diligently every day. I want to see some progress when I go back in at the end of October. 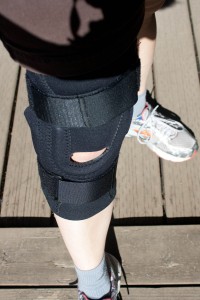 In two weeks off from the bike and running, my leg muscles have already atrophied according to my physical therapist. He did say that my hamstrings were exceptionally strong, so that was kinda nice. According to him this condition is very common in women because of wide hips but that it is somewhat fixable. I’m crossing my fingers.