I have to admit, it’s weird to spend like half your life trying NOT to get pregnant, and then to all of a sudden hoping that it happens.

When Michael and I were on our honeymoon we discussed our future and made some plans. For years I felt anxious about having kids–I’ve wanted kids my whole life and the older I got, the more anxious I got. It felt like a giant clock was ticking in my face. Tick Tock, Times A’Wasting! Then we got married and I felt that anxiety go away. I no longer felt pressure, like time was zipping by. I have no idea what changed but it was pretty immediate.

So back to Maui…we were blissfully lounging on the lanai after dinner one night, watching the sunset over Kamaole Beach in front of our condo, drinking our adult beverages and discussed our plans. Neither of us are spring chickens so we knew we’d be looking at trying to get pregnant in the next year or two. 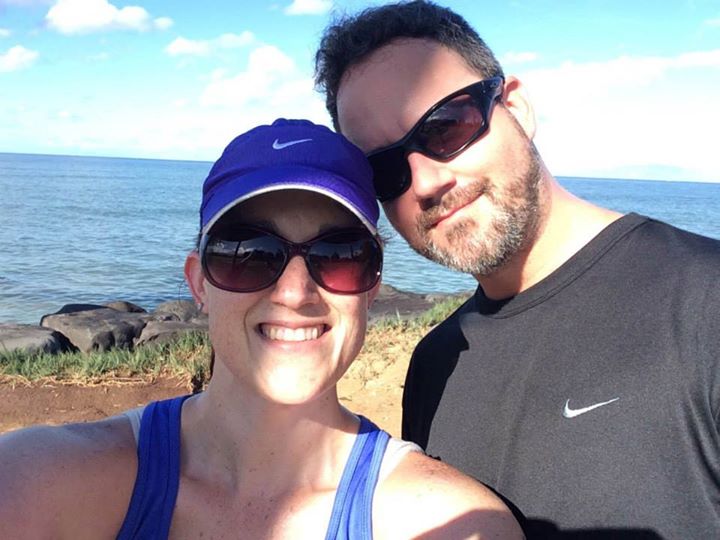 We got back from Hawaii and got settled in to life. Normalcy returned, the monotony of regular life (work, gym, chores, etc) also came back. Still wasn’t feeling pressure to have babies, but was warming up to the idea again. We’d tentatively discussed it happening somewhere around our 1 year anniversary.  I decided to talk to my doc to see if he had any suggestions–one was getting off my acne medication that can cause birth defects. It was time to stop taking it anyways.

I got off the acne meds and tried to clean up my diet. I was still holding on to the 10-ish honeymoon pounds I’d gained and while I tried and tried, I just couldn’t get rid of it. My doctor also suggested I start taking a prenatal vitamin. He said that it could take 6 months to a year for my body to get back to “normal” after stopping the pill. When he told me it could be a year that kind of make me nervous.

It was getting time to refill my prescription (they come in 90 day prescriptions) so we discussed it and decided I wouldn’t refill the prescription. We were NOT going to “TRY” to get pregnant, I was just going off the pill to get my body adjusted and back to “normal” and then we’d see what happens. We both felt like if it happened right away, that wouldn’t be a big deal, but it would better to try and get my body back to “normal” now than wait 6 months and wish we’d done it sooner if it took longer to get pregnant.

My body got back to normal immediately. I don’t know that I necessarily ovulated those first two months but I everything else was normal. Around the fourth month off the pill we decided to try. Not super-high pressure try but casual try, you know what I mean? I have been tracking my cycles in the Ovia App (I liked it much better than Fertility Friend) and spent a few months just trying to figure out what my body was doing.

There were a few disappointing cycles. Fast Forward to July….

Michael thought for sure it worked. I thought so too and then all of a sudden I started having PMS symptoms. Horrible acne breakout (my acne actually hadn’t been bad since going off my acne meds!), mood swings, craving salt, cramps. Fourth of July weekend came and I was starting to feel blue. I realized it hadn’t worked and I felt like “ok Aunt Flo, hurry up and get here cause these PMS symptoms are killing me and I’m over the wait.”

The day after the 4th I was expecting my period and it wasn’t there. Really? Thanks body. I was still convinced that it hadn’t worked. Days went by, no period. I felt crampy and bloated. Kept checking and waiting for it to start. I took a few pregnancy tests and they were all clearly negative. What the hell? So now I just don’t have a period at all?!

After four days of no period and still no positive test, I emailed my doctor. His response was “maybe it’s stress” and said he could order a blood test to make sure. Feeling down and confused as to what my body was doing, I decided to take one more pregnancy test. 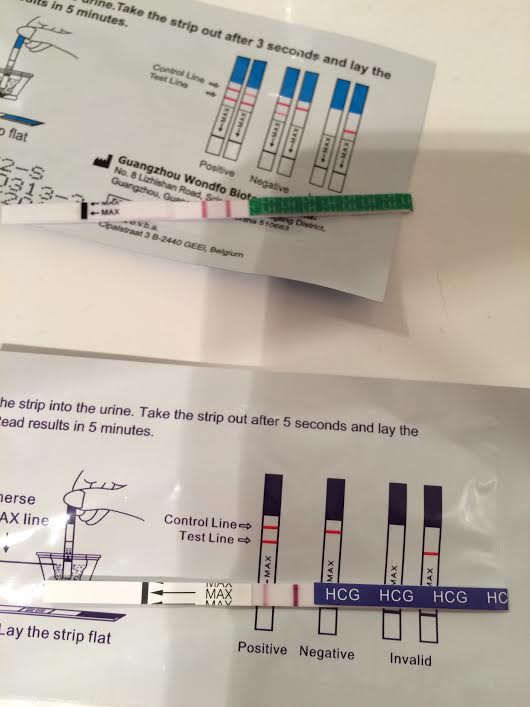 Faint line??!?! What does that MEAN?! It was really faint. Like squint to see it, faint. I took another one, still faint but there was a second line. I felt baffled. I went to bed still confused. The next morning I woke up and took another test. A little darker line but still not a “Oh my god this is definitely a positive”. I guess I just thought it would be obvious?

I emailed my doctor and told him about the faint lines and he said to come in for the blood work. After work on Thursday I went in, got my blood drawn and they said it would take 24 hours for results. 24 hours!! I went to the store and bought a ClearBlue Easy digital test (up to this point I’d been using the cheapo Wondfo ones from Amazon, same with the ovulation tests).

I got home and Michael was making us dinner. I still hadn’t told him my suspicions yet. I guess I just didn’t want to get excited until I knew something was happening. I peed on the stick and then left it in the bathroom to go help with dinner.

5 minutes later I went back into the bathroom to look. 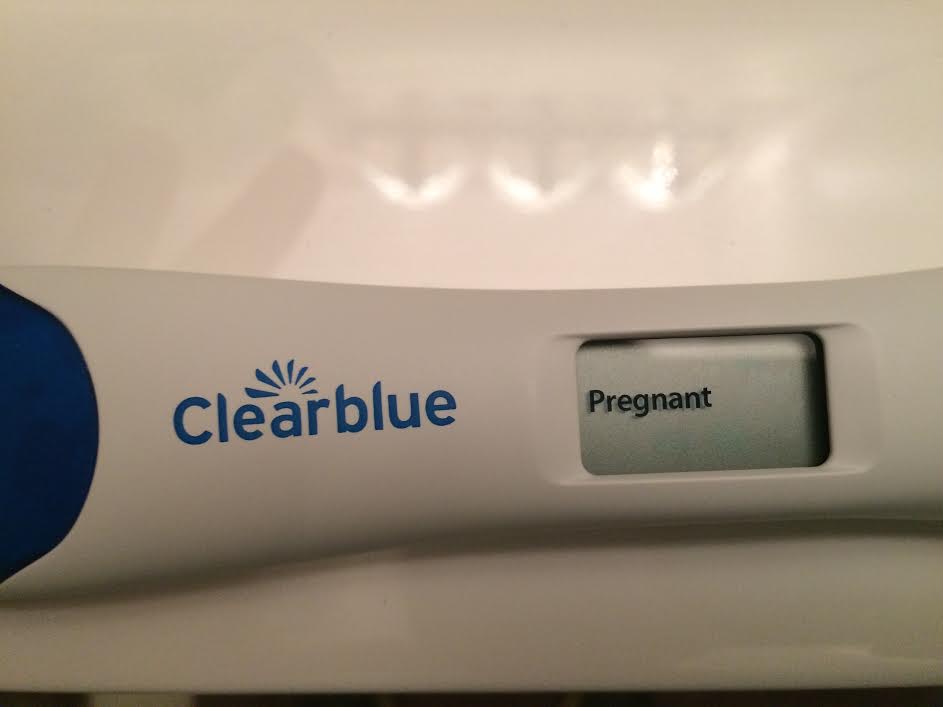 I immediately started shaking and felt a little nauseated. And panicked. Oh my god this is real.

Went back into the kitchen to help finish up with dinner, in a daze. Still didn’t say anything to Michael. He was talking to me and I couldn’t focus on anything he said, I couldn’t speak, I was just in shock and had the biggest dumbest smile on my face.

We ate dinner and watched Hannibal (by the way, that’s not the best show to watch while eating dinner). I barely had an appetite and was trying to figure out how to tell Michael. He started complaining about how sore his legs were from his kettlebell workout and he said he was going to pause the show to go put on his compression tights (lol). He went into the bedroom and I went into the kitchen where I taped the pregnancy test to Bella’s collar and then told her to “go get daddy!” 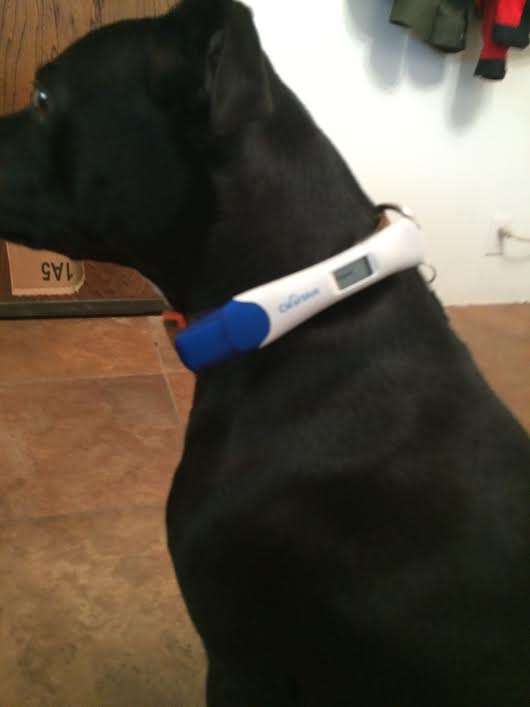 Bella raced into the bedroom, jumped up on the bed and spazzed out. Michael was like “what’s on her collar? Is that a thermometer? What’s going on? Is it hurting her?” And I was grinning like a fool and I said “Why don’t you look at it” and he then he was like “Are you pregnant?” And there was this moment where his face was transformed into shock. He had one leg of the compression tights on and then stopped what he was doing and looked at the test.

Then he gave me a big hug and said “You’re pregnant?! I told you so!”

It was a really happy, teary-eyed, joyful, all-smiles experience. But definitely scary. All of a sudden it was REAL. Like we’d talked about this for a long time, we’d been trying to get pregnant but there is something very DIFFERENT about the reality!

Bella was spazzing out, Fat Kitty had jumped on the bed and his eyes were really big…all the animals seemed to sense something was happening.

Holy shit we’re going to be parents. We’re so grown up!

So there are going to be a few pregnancy posts coming that I’ve been working on since we got the news, then it will be back to regularly scheduled programming. 🙂