I just finished reading a new book: “Walking Papers: The Accident that Changed My Life, and the Business that Got Me Back On My Feet” by Francesco Clark. It may be ill-timed or perfectly timed, I haven’t decided yet.

It’s a memoir about a young guy–athletic, a runner–who dives into a shallow pool and becomes paralyzed. 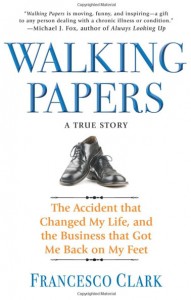 “At first, it was my legs that I missed the most–I just wanted to get out of bed and walk. Like most people, I had always taken walking for granted. You wake up in the morning, swing your legs over the edge of the bed, put your feet on the ground, stand up….Only when you’re unable to get around in this way do you realize the sheer joy of walking. [pg xiii]”

Reading that quote in the foreword of the book really struck home for me. It’s easy to take things for granted. I do not take running for granted and let me tell you why.

Before I ever decided it was time to lose weight, I had a number of really bad ankle injuries. My whole life I had weak ankles and was always rolling them. It wasn’t really a big deal as a kid–a few days of limping and then I was okay.

I sprained my ankle many times. When I was 19 I fell down the stairs and sprained my ankle so badly the doctors thought I broke my leg. Long story short: I was on crutches for almost two weeks and could barely hobble around. I did not know it but my ankle ligament was barely holding on by a thread.

I went to Vegas for the first time with my cousin Anna two weeks before my surgery. 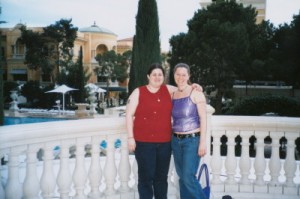 I had ankle surgery when I was 25. I’d never had surgery before. It was a scary, horribly painful experience. I was about 220 pounds at the time, not in shape at all, and being heavy put a lot of strain on that ankle.

Surgery was 100% necessary. The doctor took pictures of the inside of my ankle and he said if I had sprained it one more time, the ligament would have completely severed. OUCH!

I woke up in the recovery room feeling like an elephant was sitting on my leg. I was able to go home that day once the drugs started to wear off.

My mom came down to Portland to take care of me for two weeks. I could not move from bed. I was in a plaster cast and was not allowed to put any weight on my leg. I had to hobble to the bathroom on my crutches. My mom had to help me shower.

After a few weeks I got a new cast: fiberglass. I was allowed to walk on it SORT OF. It was still hard and I couldn’t put all of my weight on that leg.

A few months later I got the cast removed and was in a full leg brace up passed my knee 24/7. Months later, I got a smaller brace. Months later after that I was downgraded to just wearing an ankle wrap.

It was about 9 months before I could walk without any help or support. I did physical therapy (but not enough and I still regret not being diligent).

My journey to losing weight was a hard one but I got there.

I recently wrote a post about Why I Run. The conclusion was: because I CAN. Because I never could before. Because I overcame a lot of challenging things: like being in a cast for months…like not being able to really walk much for 9 months. So yeah–being ABLE to run means a lot to me. Being able to run is EMOTIONAL for me. It’s not easy for me to “take a break” or stop running.

My mom sent me an email recently that really touched me and made me think about my own situation.  She was carpooling with a few other artists:

“One of them is 72. She began talking about when she first moved here from Tennessee to go to college. It was raining and she was in a bad mood and sick of the gray skies and rain in Seattle. She was about to complain when another student who was blind commented about how soft and lovely the atmosphere was due to the rain. The gal in the car said she felt terrible to complain about the weather, when the blind gal could not experience seeing and yet could see the day in a positive light.”

I am choosing to see things in a different light.

I’ve had a good year so far. 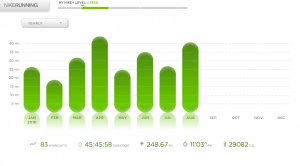 250 or so miles. That screen shot was taken a few days before Hood to Coast so those numbers aren’t entirely accurate.

I learned to not take anything for granted because of my experiences. Running was a gift. I am changing my perspective now. I am no longer feeling sorry for myself for not being able to run right now. Instead, I’m excited about this weight lifting challenge I’ve set for myself. I am excited to see results! I want ABS! 🙂

QUESTION: How do you change your perspective to the positive?