Since Logan started daycare in September we’ve been sick with something since then. I’m not joking! I think there’s been 2 or 3 weeks (not necessarily consistently) that I have well since then. The last time I called the advice nurse for whatever illness one of us had, she said that first year of daycare is “crushing.” Her words. Crushing. She said she went through the same thing with her kid. Fun times!

Well most recently in November and December I had bronchitis (for the second time since September) that went on over a month. My doctor finally gave me antibiotics and thankfully it cleared up pretty quickly and my cough is 99% gone. Unfortunately, the sinus infection I also had at the same time did not go away. According to my doctor, azithromycin works on bronchitis but hasn’t been clearing up sinus infections in people this winter. So I was given amoxycillin a week later. Within one day of taking it, my sinus infection was already a million times better. After not being able to smell anything or taste any food, and after having horrible congestion and throbbing sinuses, all of those symptoms were improved!!

Did I mention it was fun times in our house??

While antibiotics are good and I clearly needed them because they worked immediately on my ailments, they come with a whole bunch of side effects. You know all the side effects, I don’t need to spell it out here!

Because of those nasty side effects I’ve been doubling up on my probiotics lately.

I’ve always been into taking probiotics, even when I’m not taking antibiotics. They are really beneficial for gut health and studies show that it can help with things like IBS and Crohn’s, preventing yeast infections, and UTI’s.  Since we seem to catch everything from daycare, I started looking into whether or not probiotics could also help our immune systems to fight off the constant colds we seem to be getting.

Lately I’ve been feeling like the Trader Joe’s probiotics I was taking (that I’ve used for years) hasn’t really been doing the trick. I don’t know why. I began to look around at other brands. There is a lot out there and it’s hard making a decision on which is the “best” one.

I was contacted by a company who makes probiotics: Super Bio Probiotics and I jumped at the chance to try them. 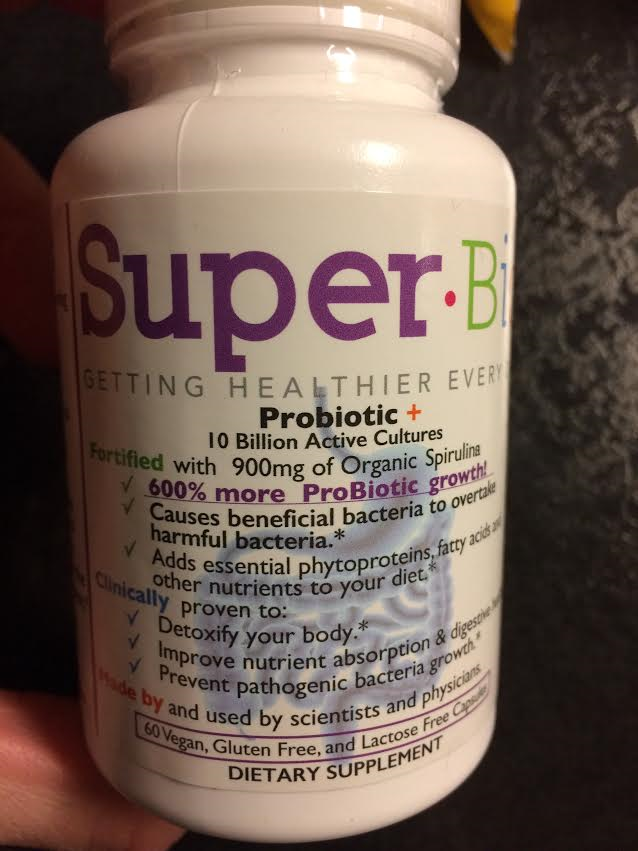 SuperBio combines its blend of probiotics with 900 mg of Spirulina to supercharge the probiotic growth by 600%. This surpasses all other probiotics on the market providing you with improved digestion and a strengthened immune system.

In addition our SuperBio and Spirulina blend gives:

20% of your overall recommended daily nutrition

They sent me the product to try. Michael and I both took the probiotics for about a month.

Each capsule contains 5 billion CFU of the following probiotics:

AND 900 mg of organic Spirulina

“How is SuperBio different to yogurt? Most yogurts contain just a fraction of SuperBio’s billions of good bacteria. Also yogurt does not contain the proprietary combination of Spirulina and probiotics that can supercharge probiotic growth in the gut and is a powerful source of anti-inflammatory and liver protective compounds. Unlike yogurt, SuperBio does not contain any added sugars or fillers.” SuperBio is Vegan, vegetarian, lactose-free, and Gluten-free. 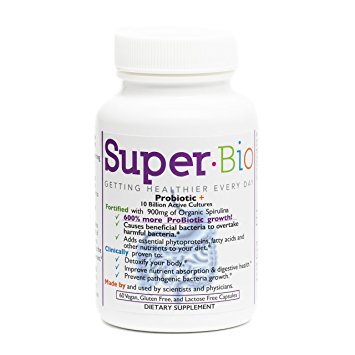 Michael said in the beginning that it seemed to help the stomach issues he has but when I checked in a month later to see what he thought, he didn’t think the probiotics made that much of a difference for him. He did not have any side effects from taking the probiotics, though. 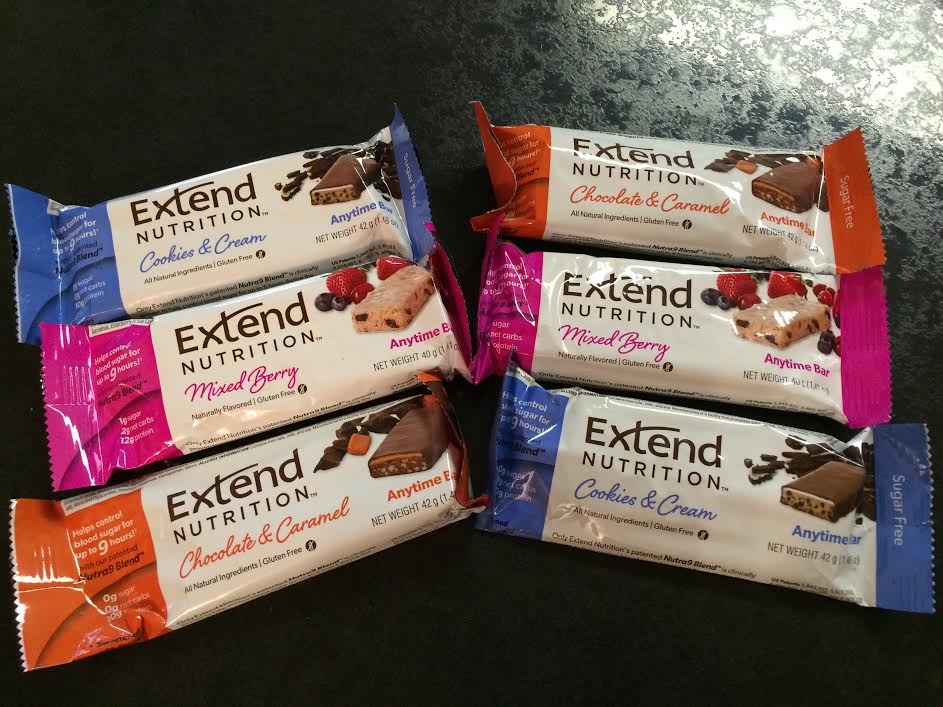 I was approached by Extend Nutrition to try some of their protein bars and write a review. I was intrigued because they were gluten free and they claimed to control blood sugar for up to 9 hours. “Regular snacks” metabolize over a 1-2 hour period, causing a rapid spike in blood sugar, but Extend Nutrition digests very slowly over a period of 6 to 9 hours. 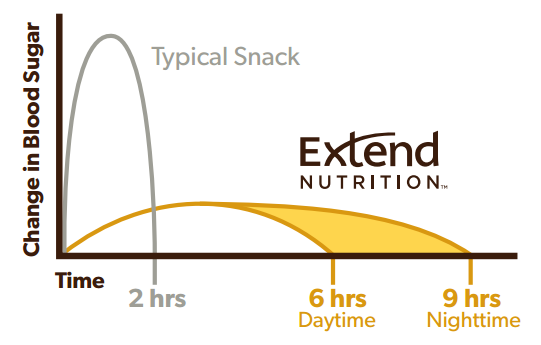 Since I was having an issue with proper fueling on exercise days (especially days I biked to work), I wanted to give it a try and see if these bars took the edge off. 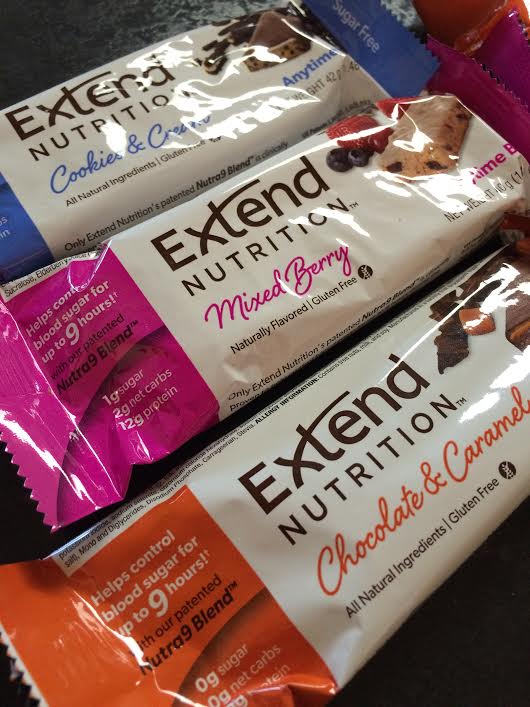 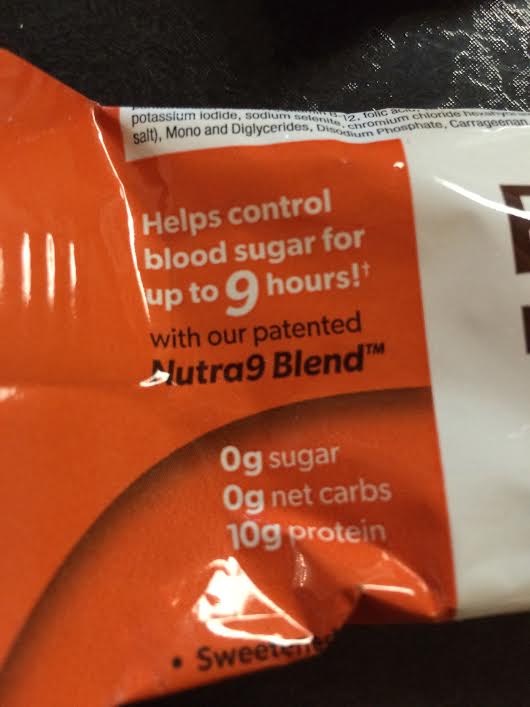 The first snack I tried was the Caramel Drizzle rice cakes. I’d brought a nectarine to work for a snack but when I went to eat it I realized it wasn’t ripe yet. Fail. Thank goodness I’d packed some of these snacks in my bag. I gave the rice cakes a try and really liked them! They weren’t overly sweet but tasted great and I did feel satisfied until lunch time. I don’t know that I’d necessarily agree with the 9 hours, but it took the edge off for a few hours until I could eat my lunch. I was a fan of these cakes! 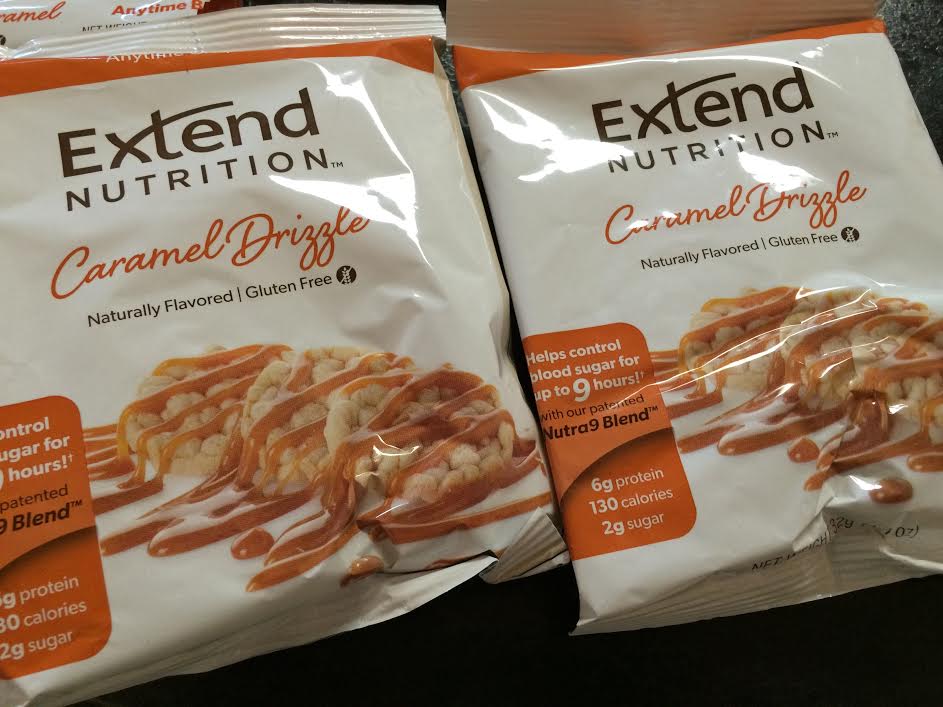 I gave my dog walker, Amy, a bar to try and asked her to give me her honest opinion. She’s always out on the go all day long visiting animals she takes care of and can’t always plan meals accordingly. She’s asked me in the past for ideas on high protein, filling, low calorie snacks that she can easily eat on the road. I gave her the Mixed Berry Flavor. Her opinion: she liked it and it curbed her appetite for about 2.5 hours (which is pretty good for a protein bar, if you ask me). She liked the texture but the one complaint was that the bar had a slight chemical taste to it. I hear her on this one–most protein bars tend to have that flavor to them. I’m not sure how they can get around that.

I also tried one of the cookies and creme bars and I enjoyed the flavor, texture and it definitely took care of my hunger for a few hours. I didn’t think there was a strong “chemical” taste to it (no more than any other protein bars I’ve tried). I really liked it!

I’m fascinated and wish I understood the science behind how it helps with hunger because no protein bar I’ve ever had before has ever taken care of it like Extend Bars. Also, loved the low calories in them! 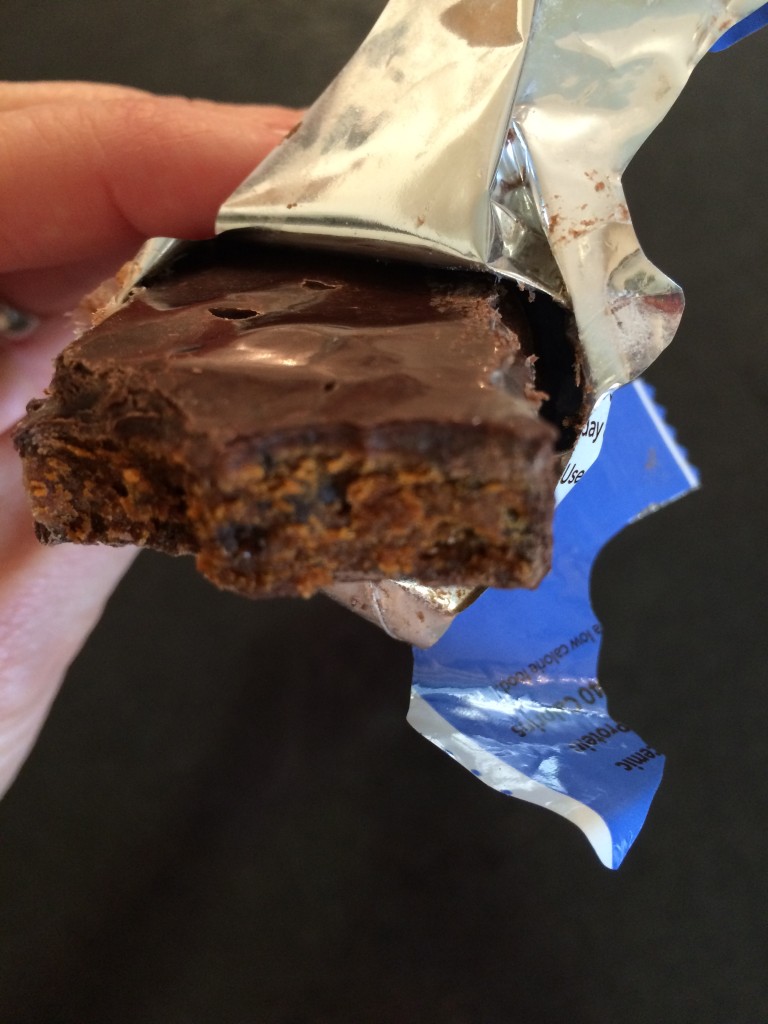 I’m going to give one reader a $25 gift card to check out the Extend Bars of your choices. All you have to do is leave a comment on this post which bar flavor you’d like to try. I will pick one winner and announce it this Thursday! So leave your comment here! 🙂