Sunday morning we headed out towards Estacada/Mount Hood with the goal of going hiking on the Memaloose Lake Trail. I’m not sure what happened but we ended up having to turn around because the directions we took said to go on an old logging dirt road that was blocked off by a gate. We drove a little further up the road to see if we could get the GPS to figure out another route but it didn’t so we turned around. I was bummed. I wanted to check it out! The pictures looked beautiful. So I need to do a little more research and see if I can find out where we went wrong, or if there is another route.

Instead, we ended up going to Milo McIver Park because we passed by it on the road and I remembered awhile ago I’d looked into hiking there. It turned out to be a pretty good backup plan! Here is a pretty good map detailing the park and trails. The only downside? None of the trails are marked or named so once you’re out in the forest, good luck! 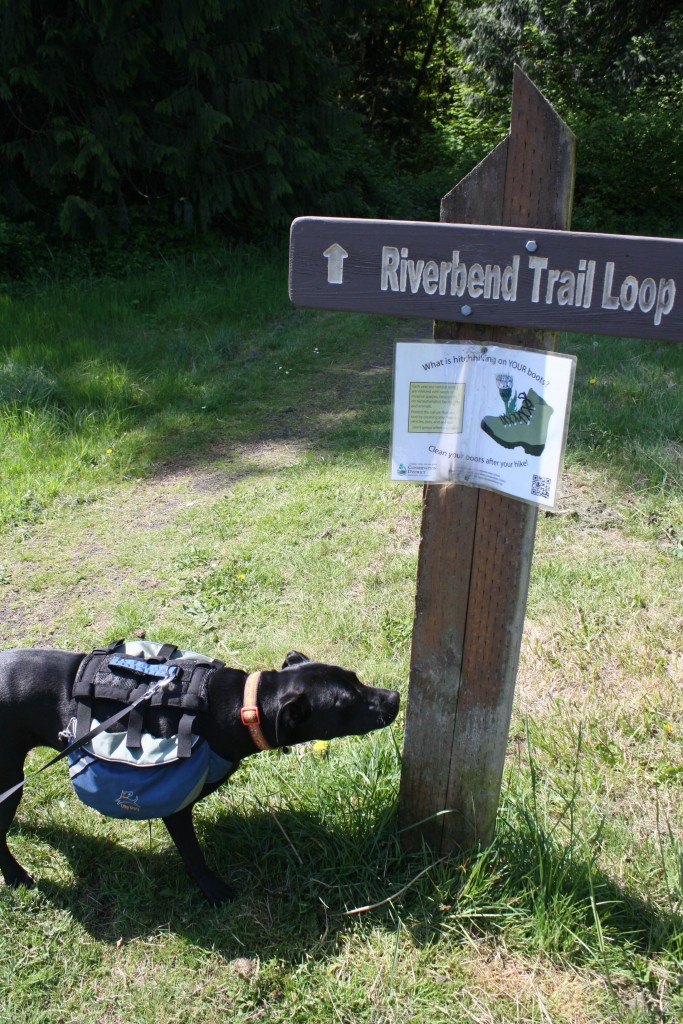 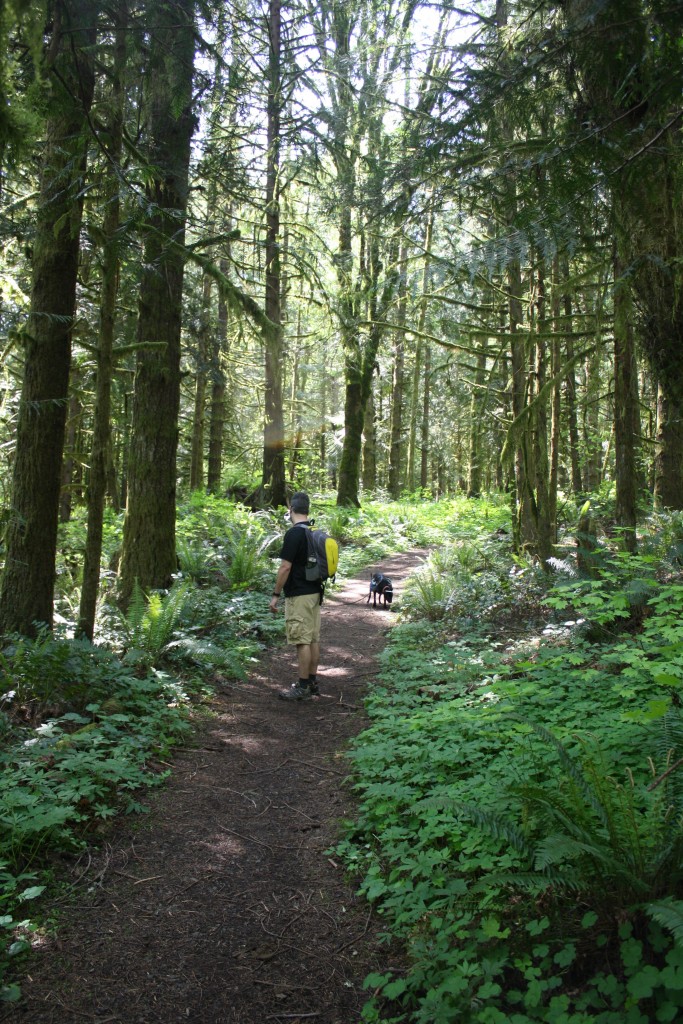 Most of the trails were pretty easy but there were a few spots that I’d classify as “moderate.” Even a little out of shape and getting over the cold, I was able to due the big, steep hills but my heart was pounding for sure! 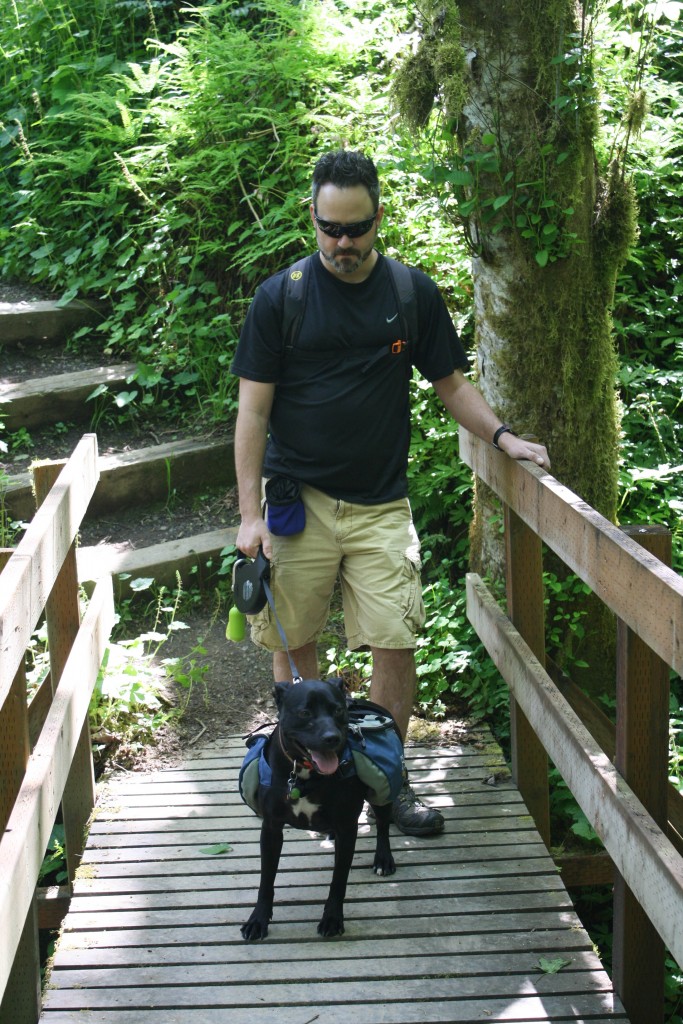 There were also parts of the trail that were overgrown. About half-way through the forest my leg got hit by some stinging nettles from the underbrush. I knew what it was right away and it sucked. We got to the top of the hills and hiked past a big silo, then came to an open field. 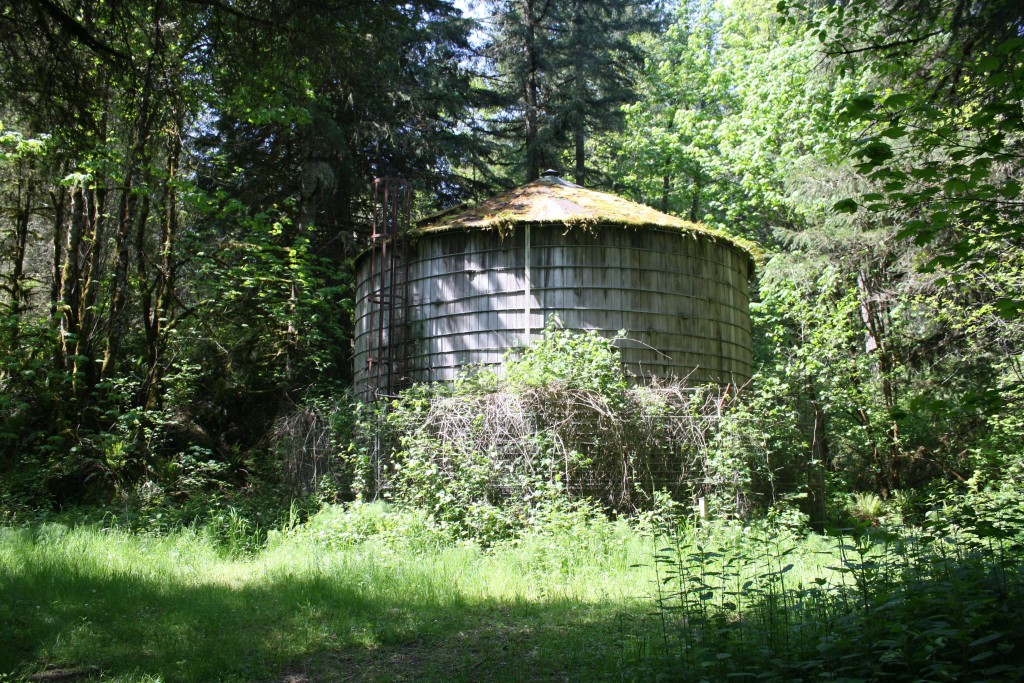 We decided it was a good spot to stop for lunch since there wasn’t anyone around there were a ton of picnic tables. I took care of the nettles first. Poured a little water on my leg, wiped the area with an alcohol pad and then used some Burt’s Bees hiking salve that I keep in my first aid kit. It worked really well. The stinging disappeared, there were some red bumps on my leg, but it settled down pretty quickly. 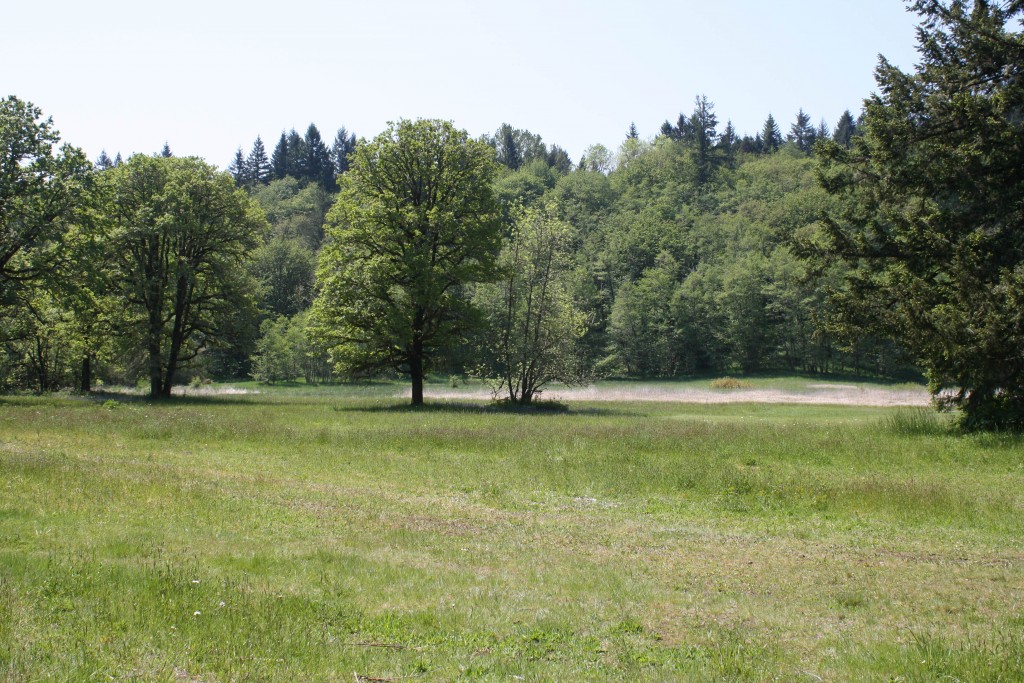 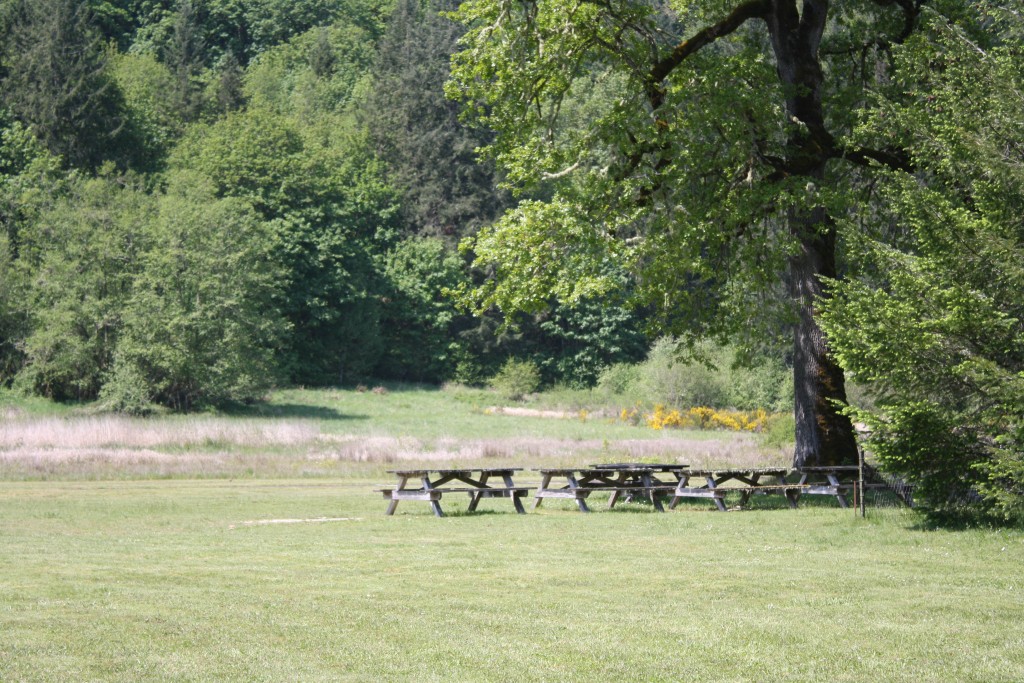 The benches by the big tree is where we had lunch. We tied Bella up to a post and let her rest in the shade with some water while we ate. Michael had packed us homemade turkey sandwiches and I had brought some sugar snap peas. 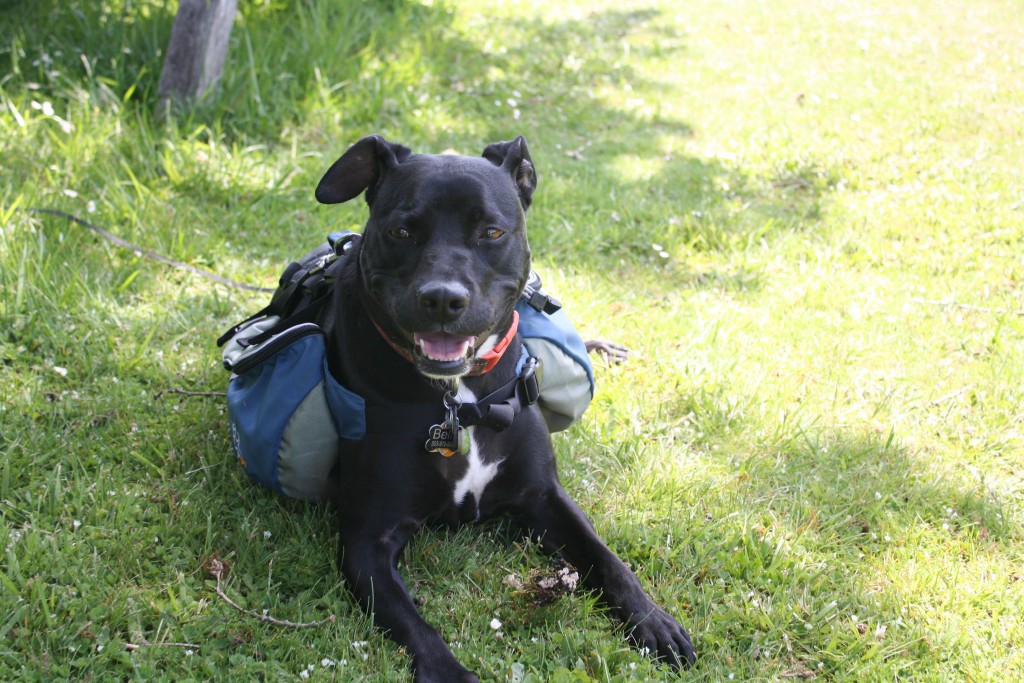 It took about 15 minutes or so for lunch and then we let Bella off her leash so she could go nuts in the giant field. 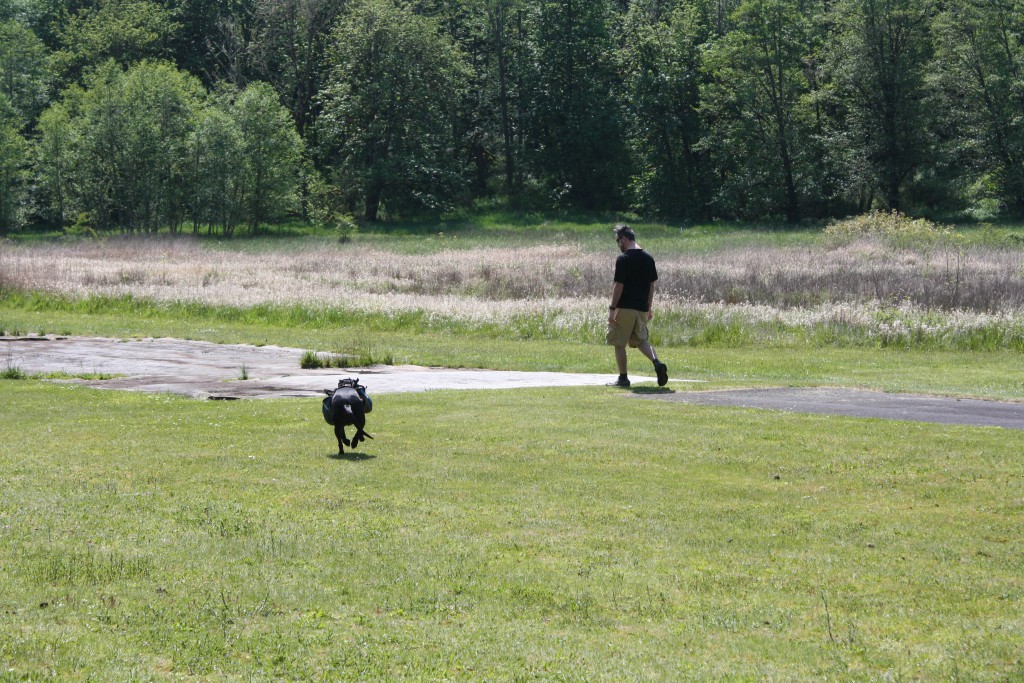 Then we went back to the trail. During the hike I saw so many slugs and TONS of snails! I’d say at least 50. They were all over the trails so you had to be careful where you stepped. 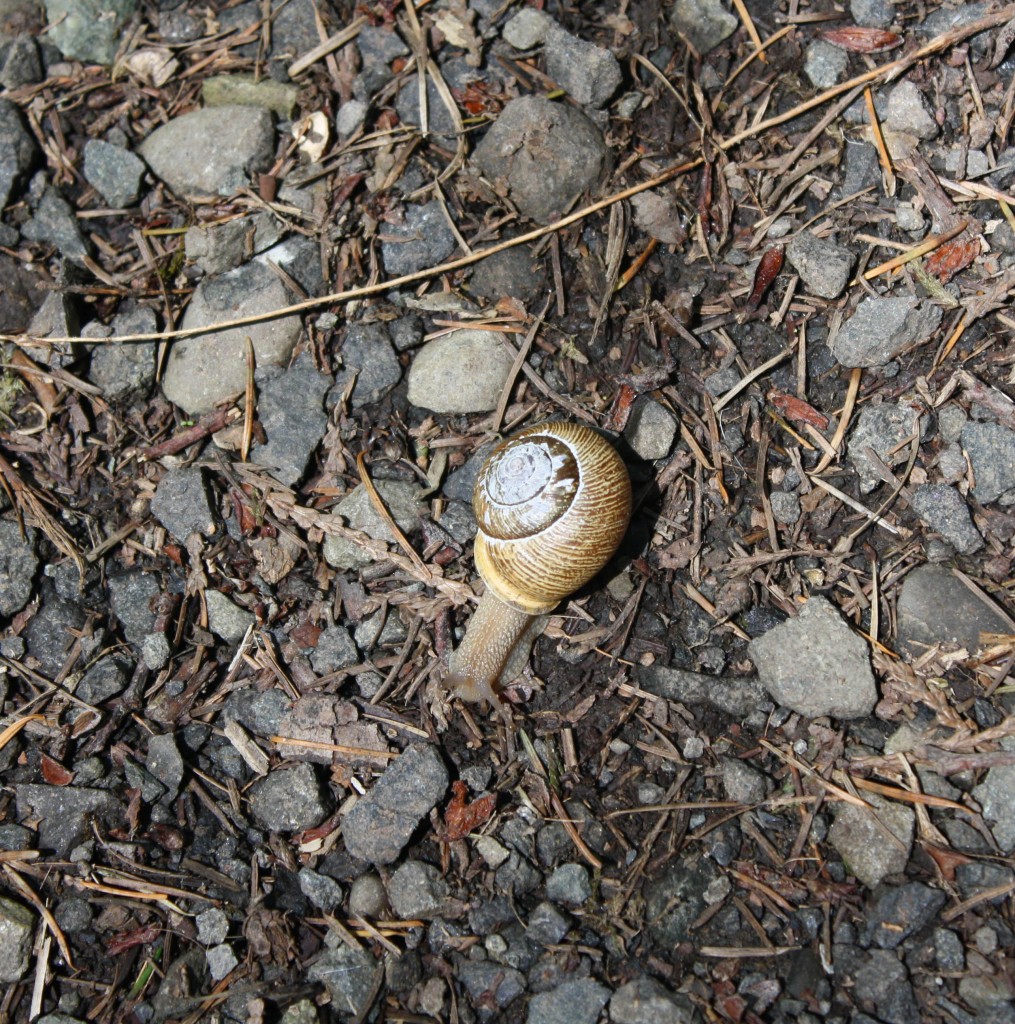 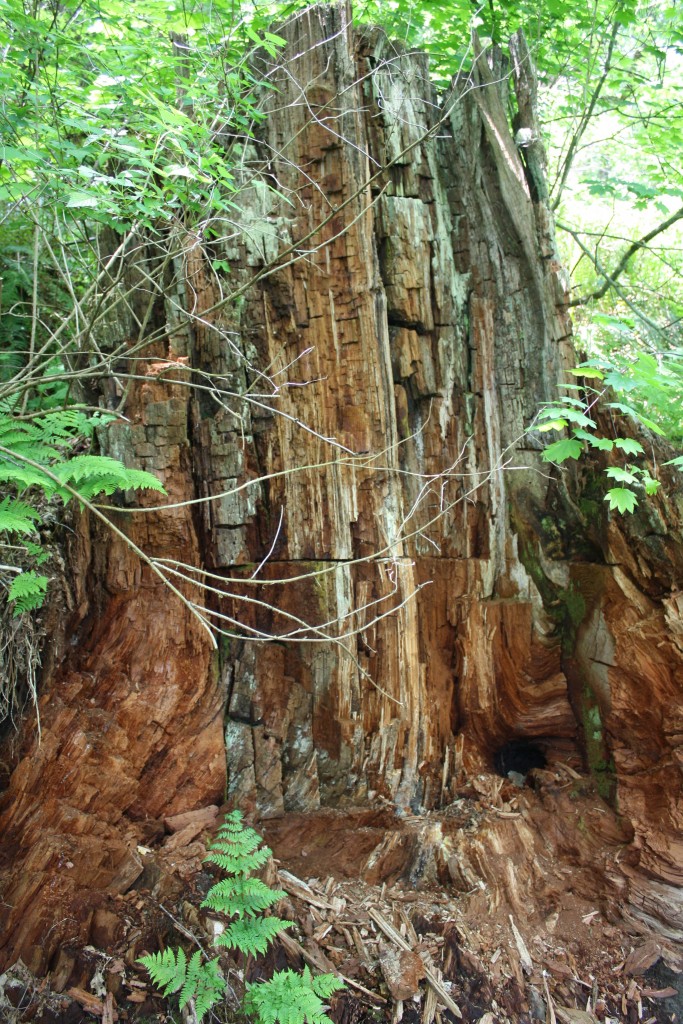 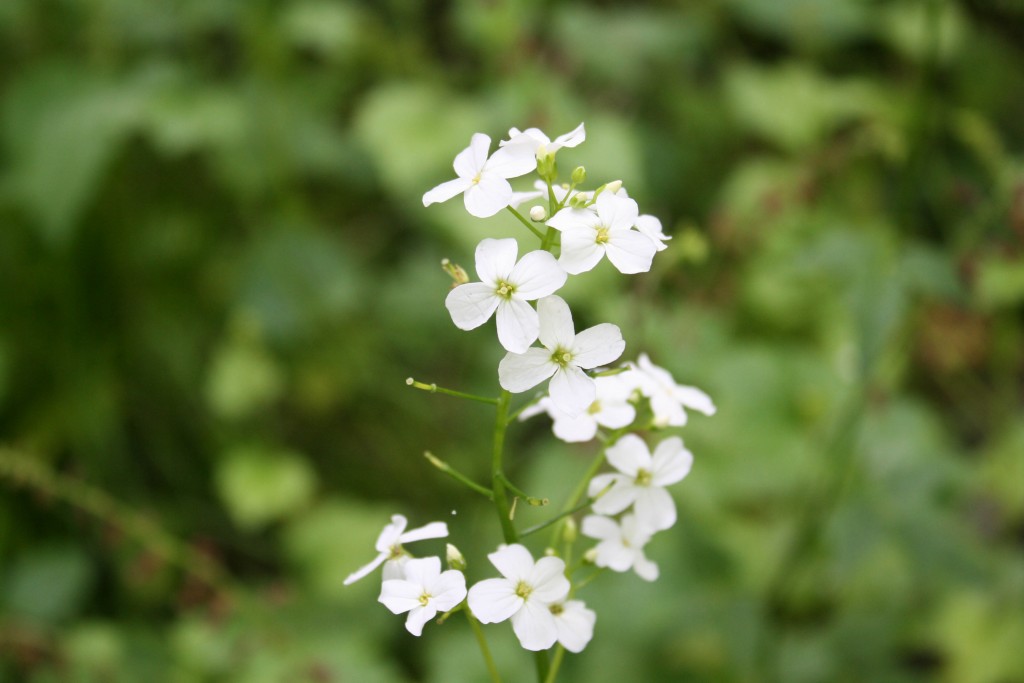 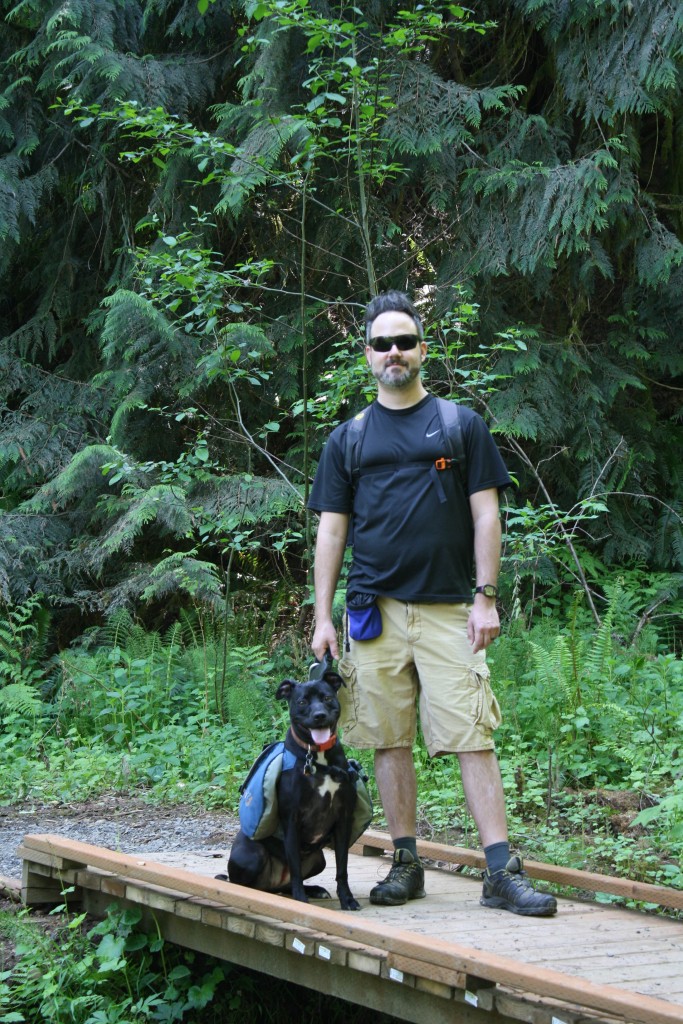 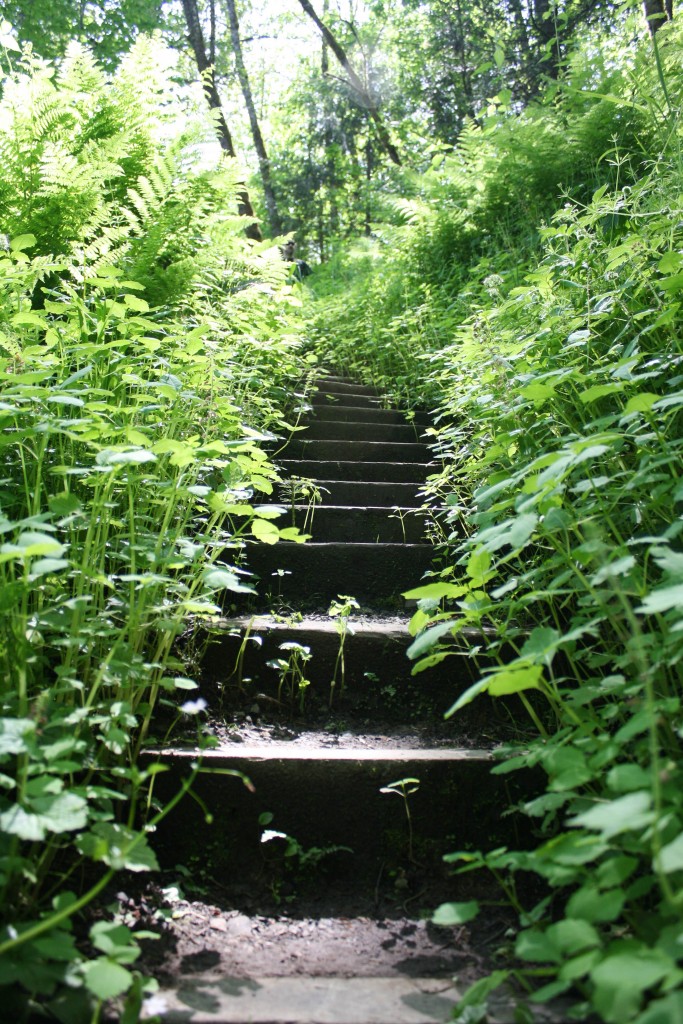 We left the forest and ended up on the Equestrian Trail. It wound downhill and was very wide. There were a few times we had a peek of the river below but mostly the view was blocked with trees. We saw TONS of horses! Bella did really well and didn’t freak out. We stepped off the trail and in the bushes to let them all pass and she didn’t bark once. 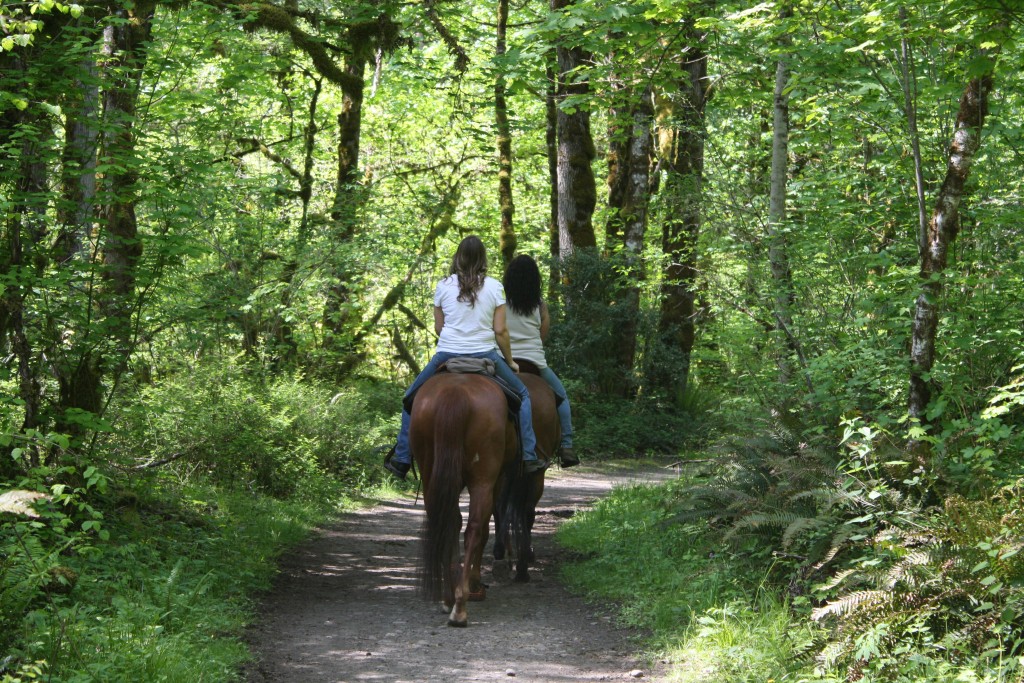 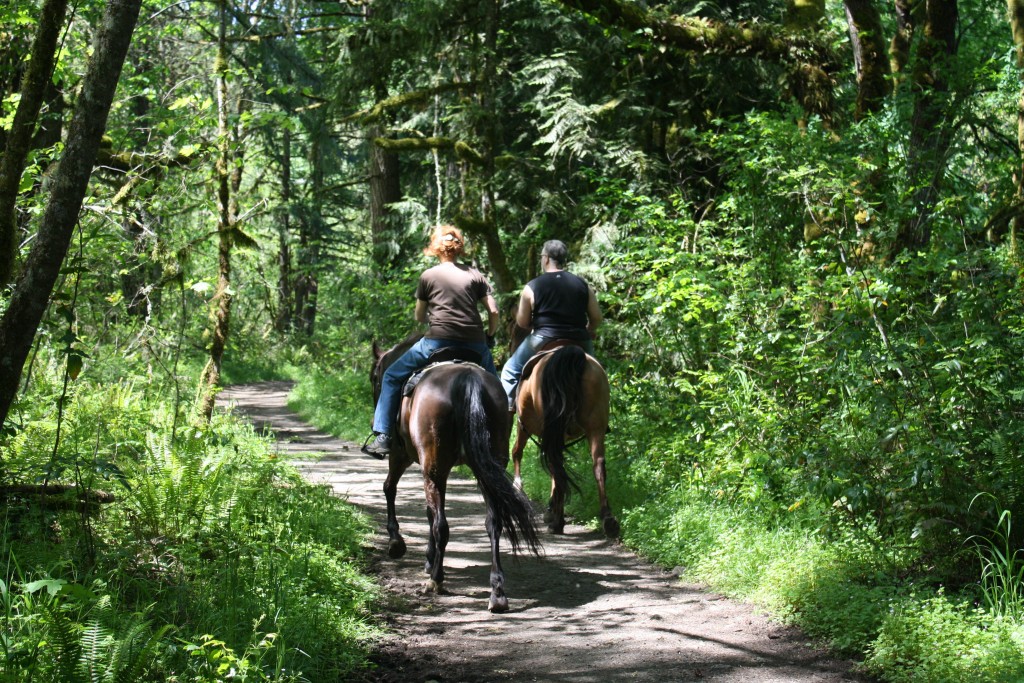 She was very curious about the horses though, and when the last ones went by Bella was dying to chase after them (but we didn’t). We let them go further up the trail before we continued on. After a bit we turned around and hiked back the way we came. A lot of the trails connect but since none of them are marked, it was hard to compare where we were on the map to see if we could loop around.

I was a little disappointed that we couldn’t just do a loop and I REALLY WISH they’d mark the trails! It was a nice park but I can see it being easy to get disoriented. Stubb Stewart was really well marked and that was helpful.

We got back to the car and then decided to check out the rest of the park. There was camping, two disc golf courses, lots of covered picnic areas, volleyball, off-leash dog areas, the trails and then there were two boat launches for the Clackamas River and the Estacada Lake. There were a bunch of kayakers on the lake and it looked so wonderful and peaceful! What a nice place to kayak. 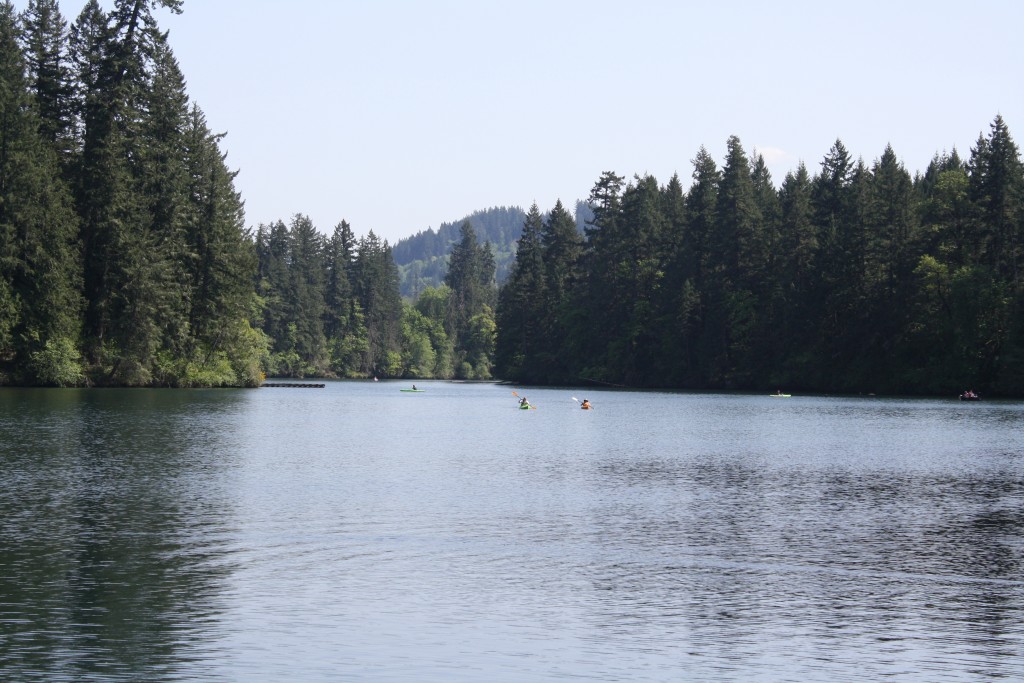 Here is how we did for the day: 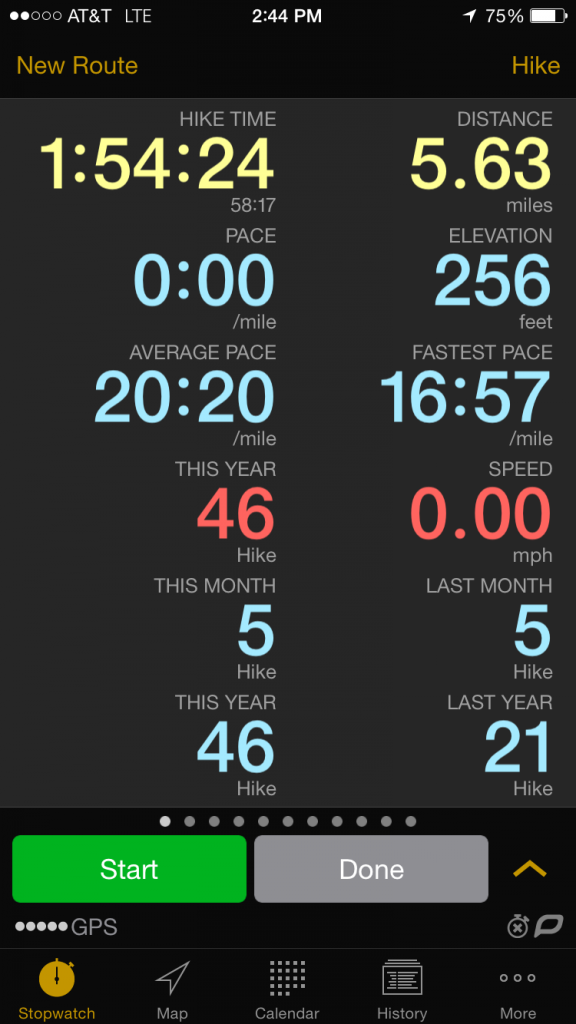 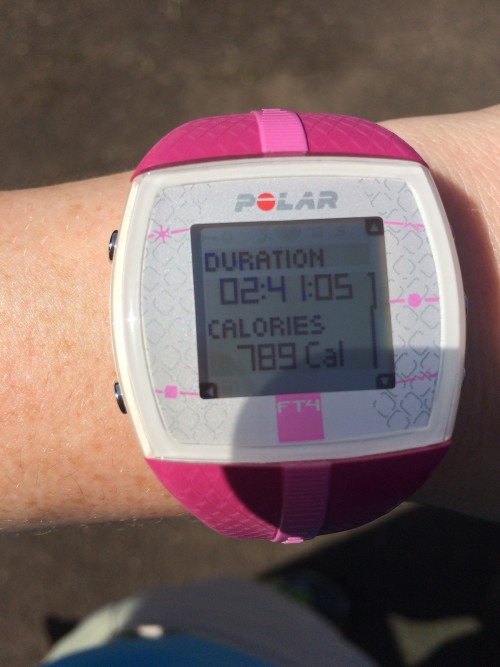 5.63 miles hiked, I burned 789 calories and Michael burned somewhere around 1200. It was a good little hike and the trails were not that crowded. We didn’t see many other hikers (just a few) on the trail and mostly saw the horse back riders. Bonus: the park wasn’t too far from our place. So while I was disappointed we didn’t make it to Memaloose Lake, I’m glad we found an alternative hiking location that isn’t an hour’s drive!