Since vacation and summer are over, it’s time to get back into wedding planning mode. I had a few appointments set up with wedding coordinators and met the first one  recently. She came highly recommended and happens to be a friend of Michael’s stepsister. We met in their Pearl District office downtown after work and even though I am a super organized person, I was completely unprepared for the appointment. I thought it would be a quickie “this is what we offer and it costs this much” kind of appointment. It was not. It took about an hour and she asked a million questions, gave lots of really good tips and advice (one in particular was that we need to double check that the caterers don’t charge the gratuity on the rentals. I didn’t even think to look for that!).

I’m looking for a day-of coordinator to run the show. Once my wedding comes, I don’t want to do anything, I don’t want to be stressed, and I don’t want my family (my mom in particular) to feel obligated to run things either. Michael and I both liked the coordinators a lot. It sounds like it’s going to run between $1000-1500 for the day and that is totally worth it. They do EVERYTHING. From setting up the tables and centerpieces to coordinating the vendors to directing the flow of the day. They also take care of anything that goes wrong.

I asked, what has gone wrong and how did you fix it? One example they gave was that they realized after the florist had left the wedding that they were missing half of the flowers that were ordered. To fix that they dismantled the ceremony decorations to use as centerpieces for the reception. Smart thinking. The bride had no idea, either. Another example was that a DJ didn’t show up. They fixed that by calling someone else last minute.

The ladies were very calm, cool and collected. I felt confident in hiring them after we left. Michael felt the same way. We have two more coordinators to meet with in the next few weeks and then we’ll make a decision.

After the meeting Michael and I had a date night at Vie de Boheme. It’s a wine bar in SE Portland and I had a Groupon that was going to expire in a week (ooops). The deal was for a wine tasting flight for two and snacks. We decided to order dinner while we were there, too. 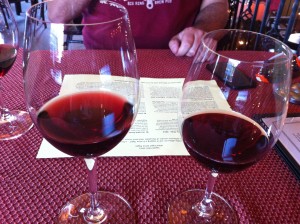 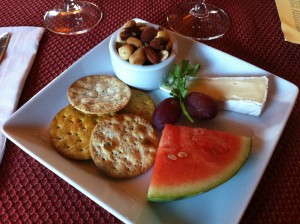 The place was really cute, stylish and trendy. They were setting up for an evening of salsa dancing, too! We did not stay long enough for that. Maybe next time. 🙂 The wine tastings were a little heavy on the pours and I ended up drinking WAY more than I expected. I also started tasting on an empty stomach. Needless to say, the lightweight in me kicked in and I cannot remember the last time I was that tipsy. It wasn’t on purpose! 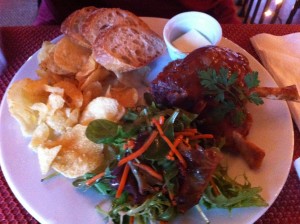 The wine flight for two was reds. We started with two different Pinot Noirs, which neither of us liked, then two Zinfandels. I liked the Zins a lot. Last on the menu were the two Cabernets. For dinner Michael ordered the pork loin with a salad. It was delicious! The meat was falling off the bone. 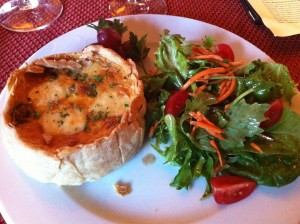 For dinner I got the vegetarian quiche with a side salad. The quiche was probably the best I’ve ever had. I thought I was smart ordering the veggie quiche but I’m pretty sure it was cooked with multiple sticks of butter. The crust was perfect and flaky and the quiche itself was delicate with the egg and cheese. So freakin’ good.

Anyways, I was definitely drunk from the tastings. I had planned on riding to work the next morning. I was honestly worried I might wake up still drunk. O.o Eeeek! Luckily I wasn’t–just a little tired. 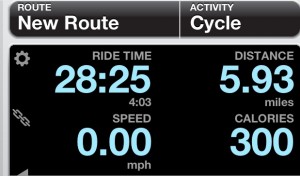 September is the Bike Commute Challenge here in Portland. I’m not sure if it’s everywhere. I joined the team at work (and Michael has a team at his office). This was my first commute of September! I drove part way into work, parked and then biked in the rest of the way. The ride went really well even though I was SLOW and my heart rate was REALLY high the entire time I rode. 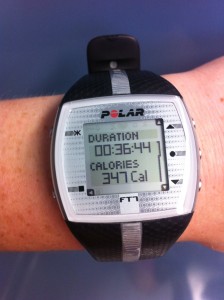 My first ride of September also ended up being one of the hottest days! Joy! 96 degrees! As the day went on the temperature got hotter and the air more stagnant. I wasn’t really looking forward to the ride home but it ended up being okay.

I tried to go slower than normal but you know how that goes…I tend to only have one speed. I stopped about three times along the way to rest in the shade and drink some water. One thing I did notice is that my heart rate was again really really high and it didn’t go down very quickly. 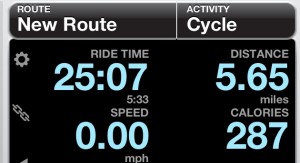 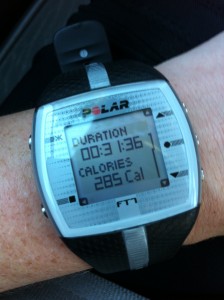 Eleven point five miles for the day! And my knees were great! I was happy (and very hot) when I got home. Michael made a delicious dinner of spinach salad and grilled chicken breast (and some guacamole).

QUESTION: Did you hire a wedding coordinator? What was your experience?