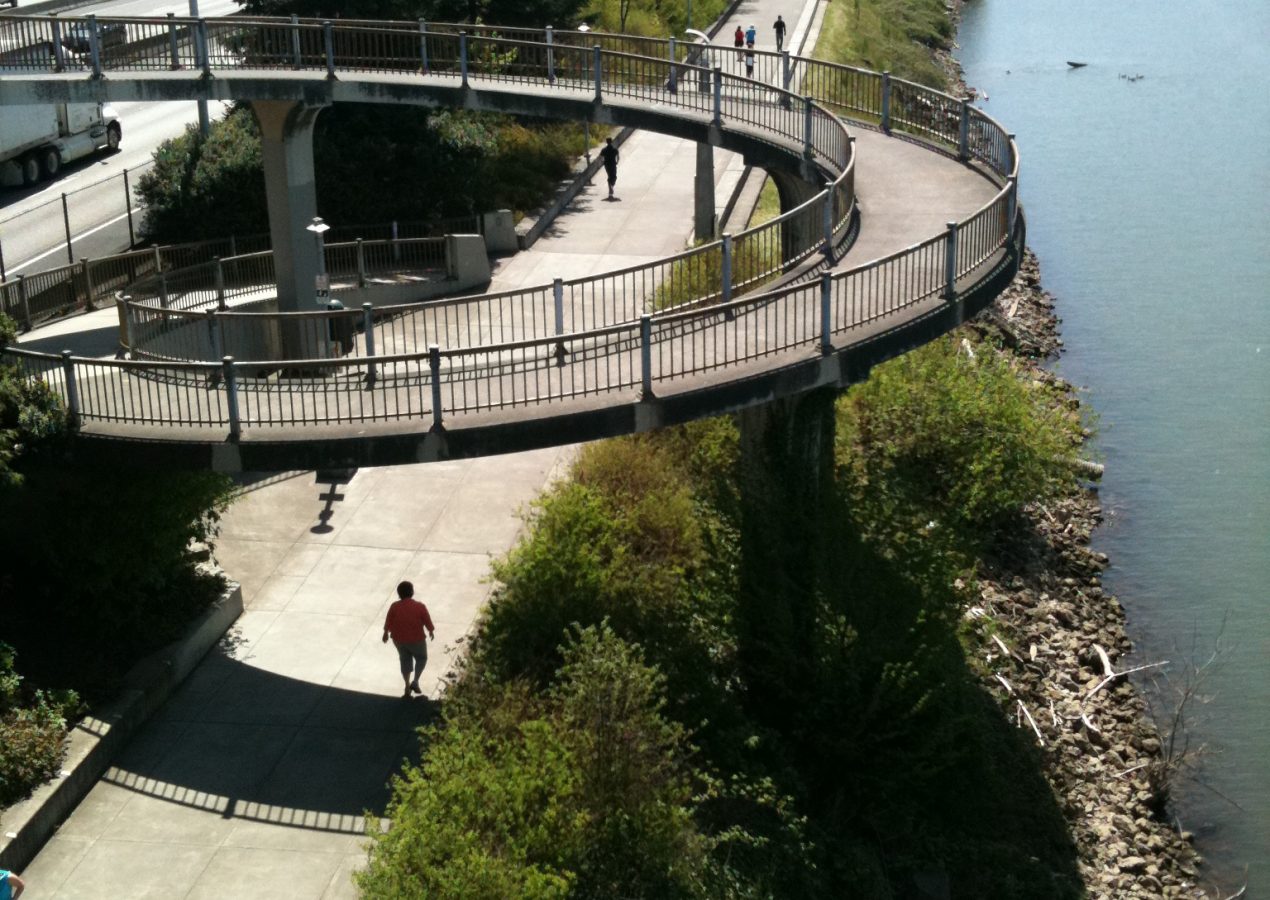 Wednesday’s weather was supposed to be sunny and in the 70’s here in Portland. I excited planned to commute to work by bike for the first time ever.

It may not seem like a big deal, but let me give you this tidbit: I love my car. I love driving. I absolutely HATE relying on public transportation to get around. I will never be one of those “car-free” types. I like my freedom. I like being in control and I don’t want to rely on others to get around. So giving up my car for the day and riding my bike was a pretty scary thing. I started thinking of all the things that could go wrong, being stranded, being unable to physically bike and then not having a car, etc etc.

I prepped everything Tuesday night. Wednesday morning I woke up at 6am instead of sleeping in for another 30 minutes and showered. I dressed in my cycling gear: Pearl Izumi bike shorts with cycling tights on over that (for warmth), a cycling shirt plus my cycling jacket.

Michael and I ate a lighter breakfast in preparation for the ride. The morning was sunny but cold and I was a little worried that it would be a miserable bike ride.

I loaded everything into Michael’s car since he has a bike rack. Michael took off for his 5 mile commute to work from the house. I drove to Sellwood, parked his car on a residential street and then took off on my bike.

It was a cool, bright morning and it was really quiet as I rode through Sellwood. I saw a few other cyclists. My fingers were cold but I wasn’t miserable and 10 minutes into the ride they weren’t cold anymore. The wind was a bit cold on the bike but again, it wasn’t horrible.

I biked down to Oaks Park and caught the Springwater Corridor that would take me into downtown Portland.

It was so quiet and relaxing. There weren’t a ton of people out (just a few other cyclists commuting to work too and a few runners) and I enjoyed my ride.

I stopped about three times to take some photos. I was doing okay on time so I wasn’t worried I’d be late. I saw some geese along the trail with their adorable little babies! I didn’t stop to take a photo of the baby geese though because I didn’t want to scare them.

I saw the people on the Willamette rowing.

I left the Springwater Trail, rode passed OMSI, and then caught the Esplanade Loop. I took the Hawthorne Bridge into downtown (I normally walk the bridge every morning). That was kind of nerve-racking. There were a lot of bikes on the bridge, plus runners and walkers, and it wasn’t very wide. There was another cyclist right on my ass making me nervous but there wasn’t room for me to move so he could pass.

I got off the Hawthorne Bridge and road up the west side of the Esplanade until I got to my street and then road up a few blocks to my office.

I stored my bike in the office bike locker room and then went to the bathroom to change into my work clothes. It was liberating and exciting to ride my bike to work!

My goal is that by the end of summer I’m able to make the whole commute on bike, leaving from home instead of driving half way to park.

During my lunch break walk I scouted out the best route to get out of downtown. With the crazy way people drive downtown I wanted to ride down there as little as possible. I decided that going across the Morrison Bridge and catching the Eastside of the Esplanade was the best bet. It just meant the beginning of my ride would be up a hill to climb the bridge!

The good news: there was a very wide, safe bike lane. I got off work at 4:30 ready to bike home! Instead of the warm cycling gear I just wore my bike shorts and t-shirt. It was so nice out! My backpack was much heavier on the ride home because I had all those clothes in it. I rode through downtown a few blocks to the Morrison Bridge, crossed the bridge over to the Eastside.

Once I was on the other side of the river it was smooth sailing all the way home. It was pleasant out, not cold or too windy. And I was making GREAT time!

I thought the commute home would be harder and take more time (going uphill) but I was faster. Weird! I made it to the Springwater Corridor, zipped down the trail and then was faced with the HUGE hill up from Oaks Park. I was nervous about the hill because it’s a killer but I made it up without having to stop (or stand).

I rode through Sellwood neighborhood streets and made it back to the car in record time. I loaded everything in the car and headed home. It as a GREAT first attempt at bike commuting!

Not too shabby! I like getting in a workout while commuting. My afternoon ride home meant my backpack was A LOT heavier though (all my cold weather gear was inside). That was difficult.

QUESTION: Have you ever commuted by bike?

Leave a Reply to Sara Cancel