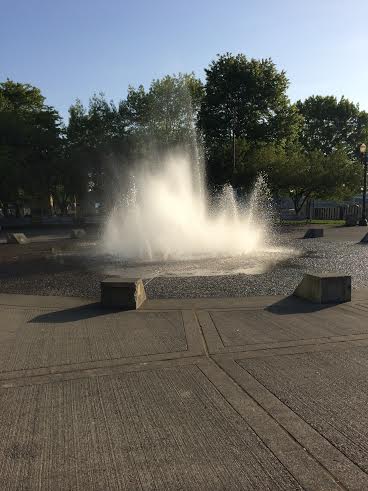 Biking to work 2 weeks in a row! Go me! I was happy when the rainy weather changed last Wednesday to NO rain. It wasn’t quite as hot as it was the day of my first bike commute, in fact the morning commute was quite chilly, but it wasn’t wet and that means I ride.

The morning was cool and quiet. I drove part way and parked and then rode in on the Springwater Trail. There weren’t a lot of bikers or runners on the trail this time. My fingers were very cold–even wearing my thicker colder weather gloves. I had to constantly wiggle my fingers and make a fist to keep the blood flowing.

The trail has had a lot of repairs since I rode last summer. There was a giant sinkhole on part of the trail near Ross Island. I feel like it was that way for two years. You can see pictures of it here. I don’t know why it took them so long to fix it. It wasn’t a huge issue but when the trail was crowded, especially in the afternoon or on weekends, having to go down to one narrow lane for both ways of traffic was difficult. It’s finally fixed! 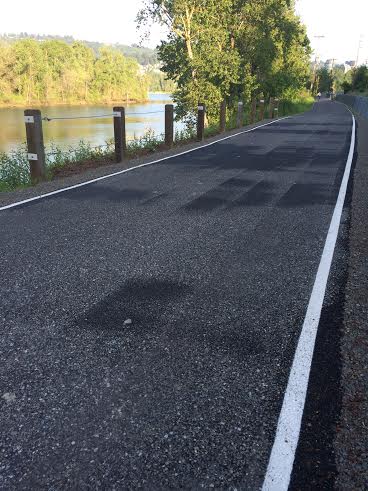 It’s so nice! They did a good job and I’m glad it’s finished and wide enough for lots of people. 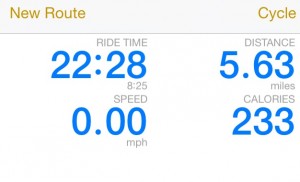 I mentioned last week that my heart rate monitor stopped working. I’ve had Polar Heart Rate Monitors for years and LOVED them. They were so great and I loved seeing the calories I burn as well as training SMARTER by paying attention to my heart rate. The last two I’ve owned have been total duds. The most recent one I bought in January. It barely lasted 3 months before it started quitting on me on a regular basis. I bought it on Amazon and of course the window to return it passed. I talked to their customer service and they were very nice to allow me to return in. So now I’m in the market for a new heart rate monitor that is NOT a Polar. In the meantime, Michael gave me his old one and it’s working pretty well. 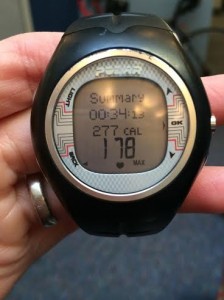 I’m thinking about biting the bullet and getting a Garmin. Any tips? Recommendations? Suggestions?

It didn’t get super warm in the afternoon but the sun was out and it was warm enough I could leave my jacket and compression tights at work. I biked 10.73 miles that day. 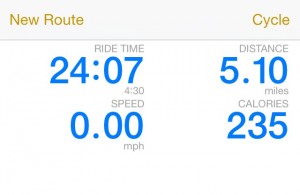 I pushed it a little harder on the way home than in the morning and about the last mile or so my right knee started to bug me. Thankfully it didn’t last very long and the next day I felt okay. 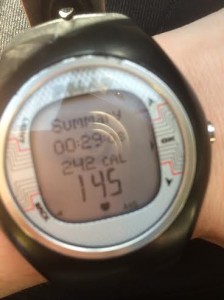 I met Michael at home, we cleaned up and then went out to dinner. Bella came with us. We went to this really good hot dog stand on E Burnside Street called Franks-A-Lot. It used to be called The Dog House. 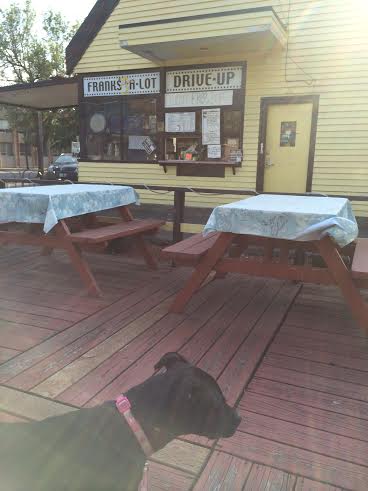 They have a patio area where you can sit in the sun and enjoy your hot dog. It’s been ages since we’ve been–probably at least a year. It’s a good pit-stop after a hike on a Saturday afternoon. 🙂 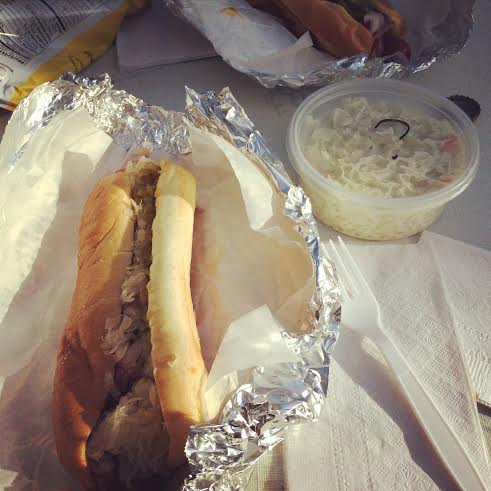 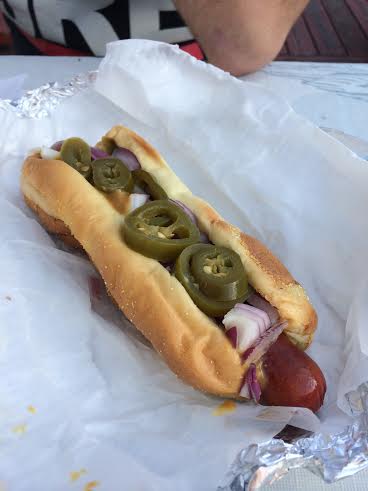 Michael got tons of jalapenos on his dog and a bag of chips. I got a regular beef hot dog with some coleslaw on the side. The owner came out and sat with us and played with Bella and gave her dog biscuits. It was cute. The sun was out and it was nice to just sit outside.

Saturday morning I got up at an earlier time than normal because I had to get in a workout before 1) it got too hot and 2) before we packed up the car and left for the weekend. We were going camping with some friends for a few days. I ate a banana with peanut butter and honey and then headed out on the bike by myself. Michael had biked to work 5 days in a row this last week and he was ready for a break. Since LA Fitness hadn’t been willing to let my try out their gym, it was a bike ride. 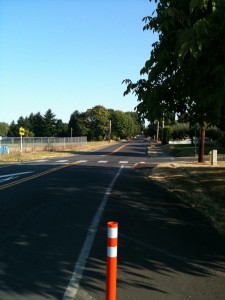 I headed out from the house in my bike shorts, cycling jersey and arm warmers. It was 62 degrees at 8:30am and after a mile I realized I did not need the arm warmers at all. I did part of my commute and then took off to head toward Johnson Creek. I tackled a few decent hills and they were super easy. 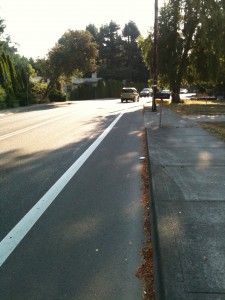 I biked up Johnson Creek and then connected to the Springwater Trail East. 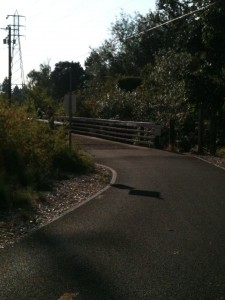 It was kind of strange at first to be going for a bike ride without Michael. While I got used to biking alone to and from work, that feels different because it’s biking to a destination–not biking for fun. But I enjoy my time on the bike Saturday morning. 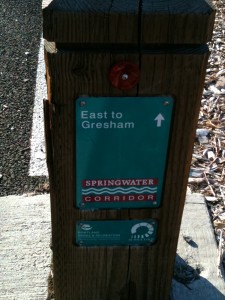 It was a nice, sunny morning and there were a lot of people out enjoying the trail before it go too hot. I didn’t have a whole lot of time so I biked as far as I could East before I turned around and headed back. 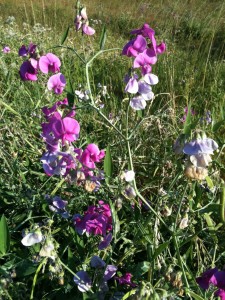 The trail was fairly quiet. I enjoyed the wildflowers along the trail and the wildlife. 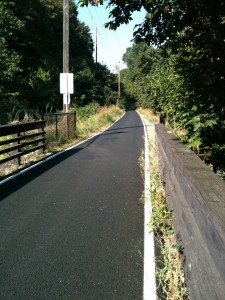 There were bunnies, squirrels and even a three-legged yellow kitty that skittered across the trail and into the bushes: 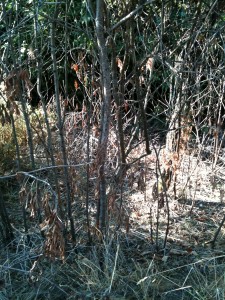 I was feeling really strong about my solo bike ride. I was also happy to be getting in a few more miles on the bike for the week. 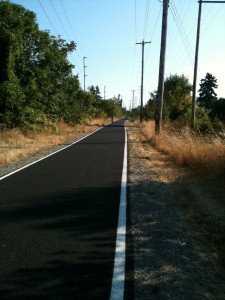 I turned around and had the wind at my back. I quickly biked down the trail, passed Johnson Creek and continued down the Springwater Trail toward Sellwood. 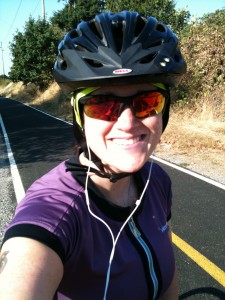 I decided to bike all the way to Sellwood and pick up part of my regular commute to lengthen my bike ride. 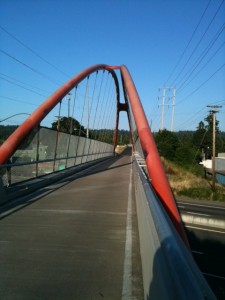 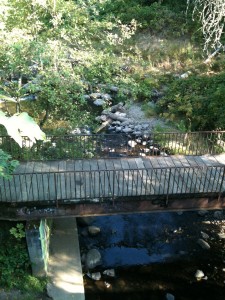 I left the trail and headed home. Then it happened. I was biking down the road in the bike lane, feeling really good about my solo bike ride, when something hit my neck. At first I thought it was a piece of gravel or a small rock that somehow got kicked up from a passing car and hit me in the neck. Then it started to sting. I realized it was a bee! I got stung by a bee on my bike ride. I swiped it off my neck, but too late to avoid the sting. I pulled off on the side of the road and tried to look in my little safety mirror at my neck. I couldn’t see anything but it hurt like hell! 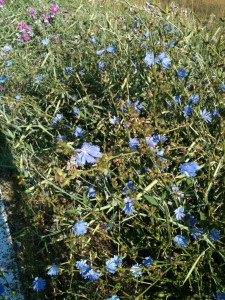 My neck started to throb and it was stinging. It hurt to touch it. I biked home the rest of the way on my normal commute route, tackling hills and making it home easily enough. I got home and checked my neck for a stinger. I didn’t see one but I saw a lump. It hurt. 🙁 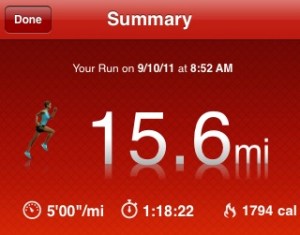 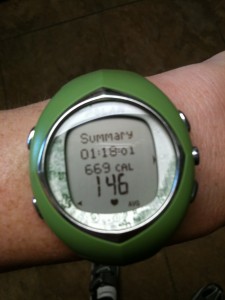 That makes my total distance for the week: almost 52 miles. Pretty good workout for not having a gym if you ask me! After my bike ride and bee sting, I scrambled to clean up and then help Michael to pack the car for a weekend of camping. We stopped at Five Guy’s for lunch on the way. 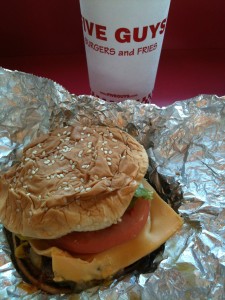 I got the Little Cheeseburger. It really hit the spot. Then we were on the road to the campground. Our friends were a few minutes ahead of us. If you are catching up on some weekend reading, here are the posts:

The Struggle Goes On

In Case You Missed It

Stay tuned for some reading about our weekend adventures!

QUESTION: Have you ever been stung by a bee?