How to Rock Homemade Pizza 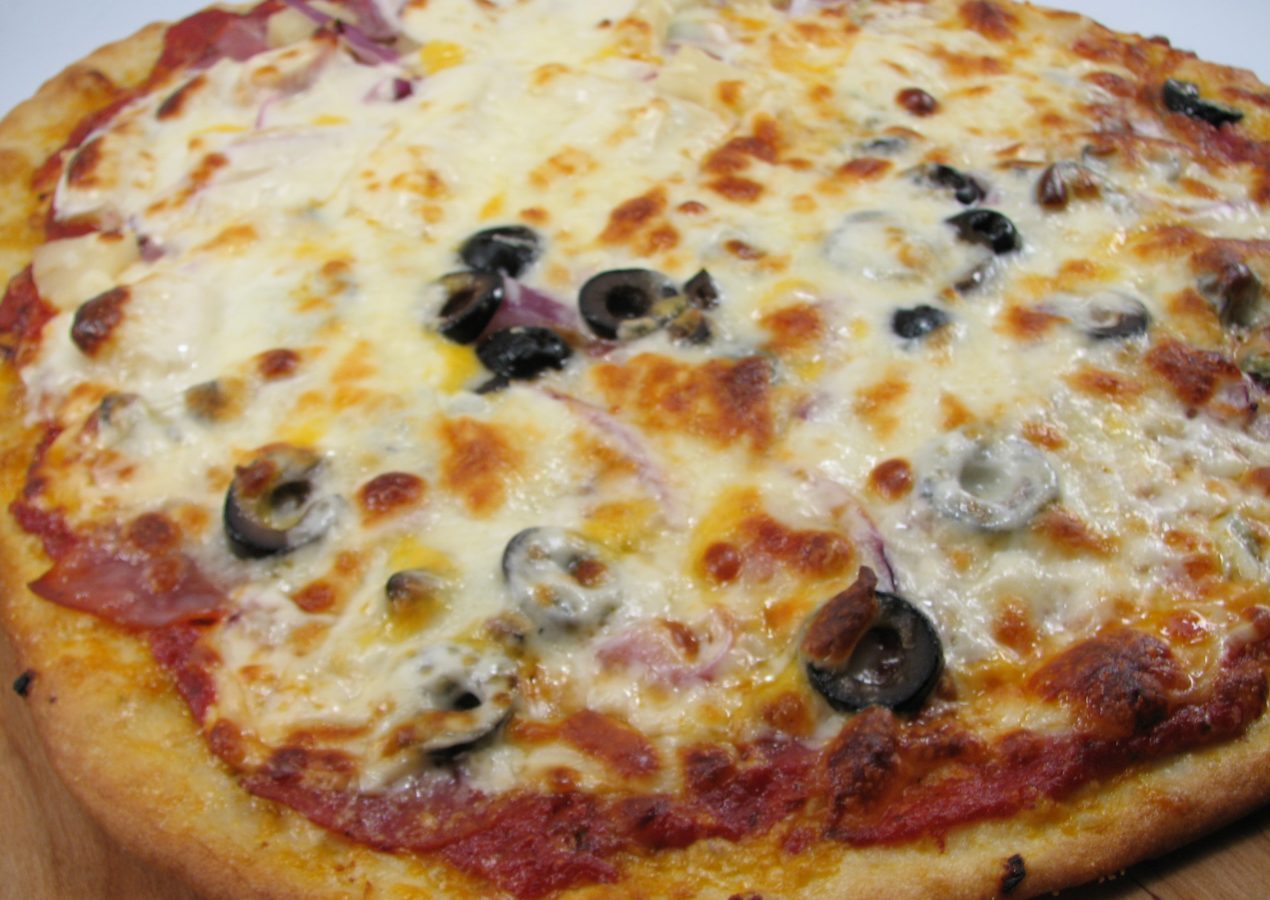 This post is a rough guide to making totally awesome homemade pizza. It’s a work in progress because we are always perfecting and changing how we do things to see if it’s better. We’ve made some really fantastic pizzas lately so here are some steps that we take:

It’s a beneficial piece to own. You can buy a pizza stone online or at various baking stores. I’ve seen them at Target too. They can be round or rectangular. They can be made of stone, metal, or unglazed ceramic tile. The one we have (that just broke actually) is round and weighs a ton.

Place the pizza stone about 5 inches from the top Element in the oven. This is because the heat with rise from the bottom up and really cook the dough wonderfully without making it burned or too crunchy.

We’ve done several different combination of white flour, wheat flour and so far the best one was the white flour dough. I bought the Bob’s Red Mill flour and for the yeast I picked up a special Pizza Yeast. I don’t know that I’ve noticed a big difference between that one and regular yeast though.

You can choose any pizza dough recipe you’d like. Michael does a thin crust recipe that makes 2 doughs (one can be frozen) or if you want to make it thick crust, use all the dough in one pizza instead of splitting them. If you freeze the dough, be sure to take it out the day before you intend to use it to defrost (we made that mistake once!).

Don’t forget to add salt to the dough! We forgot the salt one time and the dough didn’t rise that well but we used it anyway and the pizza had zero flavor.

The trick to working with yeast recipes is to NOT KILL THE YEAST. Which is what I’ve always done when trying to bake bread by myself. Michael uses our digital thermometer to make sure the water is the right temperature before adding the yeast. 110-115 Degrees for the water seems to be successful in activating the yeast without killing it.

Bake the pizza stone at 500 Degrees for about an hour. The pre-heating is very important. The 500 Degree temperature freaked me out the first time Michael suggested we try that but it made THE most wonderful pizza we’ve had so far.

That’s the recipe we are currently using but we’ve tried several others before arriving at this winning recipe. Feel free to try other ones! There’s so many ways to make pizza I find it hard to believe that there’s one perfect recipe out there.

The dough takes about 30 minutes to rise. Michael sprinkled Italian Seasoning into the dough as he mixed it too.

Michael is usually the one that does the dough and kneads it. He cuts the dough in half to freeze the other pizza for next week. Coat the dough with olive oil in a ziplock bag. Pop into the freezer.

While he does that, I prep all the toppings. This weekend we were doing pepperoni and black olives and Hawaiian.

Michael uses a rolling pin to even out the dough. Then he slides it onto the pizza peel with cornmeal.

In a previous recipe we used, we used to bake the pizza dough for 10 minutes in the oven before putting any toppings on it. It was a successful way to pre-bake the crust. I mixed together olive oil with Italian Seasonings, brushed the dough, then we baked it. Now, I brush the dough with the oil and herbs and then spread the tomato sauce on it, add toppings and bake the whole thing once.

This time I tried something new: I minced a clove of fresh garlic into the olive oil to infuse it. Then I shredded some fresh Parmesan to sprinkle on the crust after I brush it with the garlic olive oil.

For the sauce, I use whatever tomato sauce we have from a jar (currently the Costco Tomato and Basil red pasta sauce) and mix tomato paste in it. I use more tomato paste than I do sauce so it’s pretty thick. I’ve used JUST tomato paste in the past and that worked well too. The store bought “pizza sauce” was kind of nasty–sweet and too liquidy.

Spread it on as thick or as thin as you like!

I totally spaced when it came time to add the toppings and didn’t put the cheese on first. Ooops. It doesn’t necessarily matter because it’s all going to taste the same, but putting the cheese on first makes the pizza more photogenic. 🙂

I brushed the crust with the garlic olive oil and sprinkled it with the grated parmesan. It totally made the crust crispy, golden, and  delicious!

So this pizza isn’t necessarily “pretty” looking because I goofed on the cheese. But damn did it taste good!

I ate 1 piece of the Italian meats (salami and pepperoni) with black olives and red onion. And I ate 2 pieces of the Hawaiian with red onion. They were fantastic! Baking the pizza at 500 Degrees makes the cheese ooze in a wonderful way.  I think next time I would use more garlic on the olive oil infusion.

Michael’s Comment: He baked the pizza at 500 Degrees for 9 minutes. He wasn’t satisfied with it this time and said next time we’d try it at 450 Degrees and bake the pizza a little longer. I felt like the pizza was perfect and just the perfect crispiness for a thin crust. We have very different tastes when it comes to pizza crispiness though!

Since the pizza turned out so well, I treated us to a few freshly baked chocolate chip cookies.

How I’m Making it Work