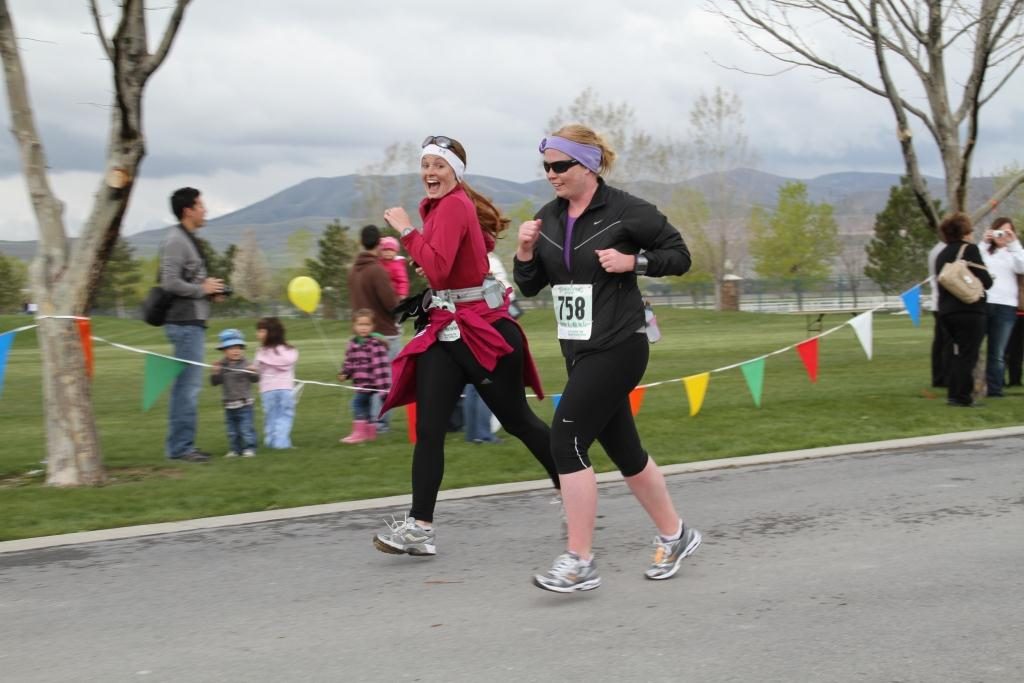 I recently completed my first half marathon. It was the most wonderful feeling in the world crossing that finish line; it was also the worst.

You see, I hadn’t listened to the advice I had received regarding training for a big race, and I ended up injured the week before the big race and stubbornly ran it with an injured knee.  Crossing that finish line was humbling in more than one way.  From mile seven on I had been in excruciating pain with no choice but to finish the course.  I could barely walk once the race was over.  I had to take over six weeks off from running to let my body heal itself.  It was an ending so very different from what I had dreamed of.  I was proud of my accomplishment, but so disappointed in the outcome because I knew it should have been different.

So what did I do wrong?

First, I didn’t follow my training like a good girl should.  I was about 80% invested in the schedule, when I should’ve been as dedicated as possible.  Half marathons aren’t a small undertaking, and they require a certain level of dedication that I did not give.  Long runs on the weekend are critical to improving your body’s ability to heal and develop.  I missed a few big mileage runs and ended up having to make up the distance right at the end of the training program.  The sudden increase in mileage resulted in the classic overuse injury—the dreaded IT band flare-up.

Second, I did not cross train.  Not one ounce.  The only workouts I did were runs.  I never biked, swam, or lifted weights.  I was working the same muscles over and over again.  The ones that didn’t get used during running became weak, while my other muscles became strong.  I developed a muscle imbalance that made me even more prone to injuries.  Not only was I overusing some of my muscles, I was also letting some get drastically underdeveloped.

Third, I did not strengthen my core.  Apparently, it is really important to have a strong core when you are a runner.  Who knew?  I certainly did not know this until my physical therapist pointed it out to me.  It makes sense—the core keeps your muscles aligned, keeps everything in balance, and supports the rest of your muscles as they work together to keep your running fast and strong.

Those are the three main areas where I went wrong.  The lack of all three lead to a spectacular injury that sidelined me for more than I care to think about, and resulted in some expensive doctor’s visits.  Not only that, it was incredibly discouraging.  It is not something I’d wish on anyone who is getting into running.  I know Lisa has suffered from the same injury, and she can attest that it is a hard one to come back from.

The good news is that I am back.  And I’m running another half marathon in two weeks and training for a full marathon in a couple of months.  And this time, I’m doing it right.  Here’s what I learned the hard way, so that you don’t have to!

Pick a training program based on experts’ advice and follow it:  There are many training programs online that you can review to get an idea of what to expect when training for a big race.  I really liked Hal Higdon’s novice half marathon training program, but there are many others out there that provide excellent schedules.  Find one that you know you can stick with.   Find one that appeals to you so that you don’t get sick of it within the first few weeks.  Make sure it’s a program that you can actually commit to.  Make sure that you have the time each day to complete the workouts.  And make sure you don’t increase your mileage too quickly; that’s the quickest way to get injured.

Listen to your body:  Speaking of getting injured, don’t be stubborn like me and run through your injuries.  If something hurts, back off of your training and take care of it.  If it is severe, don’t even hesitate—get your butt to the doctor.  Unfortunately, running is somewhat of a high injury sport.  Make sure you are paying attention to your body.  The worst thing you can do is run when you already have an aggravated body part.  Remember to think long term.  Sure, you might miss a race but you can always make it up.  You can’t make up a permanently destroyed limb.  I ended up missing THREE races because I chose to run my half.

Cross train:  I bet you knew this one was coming!  For my current training schedule, I bike twice weekly.  Biking helps work out the other muscles in your legs that running doesn’t quite get to.  I’ve found that my legs actually feel more refreshed when running the day after a hard bike ride than they do the day after a short run.  More importantly, it helps keep my body balanced and ready for a long endurance run.

Work those abs:  Time for core work!  My physical therapist recommended some quick exercises to keep my abs strong and secure.  Two quick ones that I’ve loved/hated are the plank and the bird-dog pose.

Start with your hands and knees on the ground and bring your right arm and left leg up to the position shown above.  Hold that position for five seconds, and then repeat with the other side.  Repeat this move ten times.

You are probably familiar with the plank.  It has made quite the name for itself!  There’s a good reason for that—it is a great way to quickly work all the core muscles, including those in your back.  I do side planks and standard planks.

I do 20 seconds on each side for the side planks, and then I do three sets of the standard plank at 20 seconds each with a short rest in between.  I’m working my way up to a minute!  It’s a great burn and I’m learning to love this particular exercise.

In addition to the three changes above, I’m also watching my nutrition and making sure that the food I put in my body is the fuel I need to keep running long distances.  I’m a newbie runner; I’ve been running for less than a year now.  I started from being able to only run for 30 seconds at a time, and I am now able to run for more than two hours straight.  During this year, I’ve learned how important it is to eat the right nutrients and give your body what it wants (not necessarily what I want!).  Make sure you are eating right!  During the runs themselves, I use Gu Gels to keep my electrolytes up and keep myself hydrated.  If you don’t like the Gu Gels, there are products like Cliff Shot Bloxs which also work well.  There are a lot of options out there for fueling before, during, and after runs.  Do not underestimate the value of fuel and hydration during runs.  It will keep your body working well!

As most of us have in common, I’m also running to lose weight.  Admittedly, it is hard to find a balance between fueling properly for training while still having a deficit in calories.  You don’t know hunger until you’ve ran 10 miles!  I find that after a big run, I feel more justified in eating a big fat cheeseburger because I’ve “earned it.”  Obviously, this isn’t the right mentality if I am trying to drop the remaining stubborn pounds.  It is important to keep an eye on your intake and make sure that you aren’t eating back all the calories (and more) you just worked so hard to burn off!

The most important thing I learned while training for my first half marathon is how much we truly can accomplish when we set our minds to something.  Last year I would have laughed at you if you told me that one day I would be able to run farther than 5 miles.  I couldn’t have run 5 miles at that time if my life depended on it.  But, with determination (and a little bit of craziness) I was able to cross that finish line after completing 13.1 miles.  I finished in 2 hours and 46 minutes, and I’ve never been more proud of myself.  I accomplished the goal I set out to do, and was rewarded with more than just a medal.  That is a memory that won’t ever fade away, and I can’t wait to cross the finish line at my next half marathon and know that I did all I could to make that race the best it could be for me.  Our bodies are capable of amazing things if we are willing to believe in ourselves and our capabilities.  Don’t ever let doubt get in your way; you can do anything you want to if you put in the time and effort.

Starting at around 180 lbs., I realized that my life was headed in a direction that I didn’t want to continue on so I made the change.  One step at a time, I changed my destiny.  I have been running for almost a year now.  I started with a goal of running a 5k, which then progressed into a 10k, a half marathon, and now I am training for a full marathon in September.   I’ve also ran a couple of big relay races in Florida Keys and Utah.

Lisa’s Note: Thanks so much Becky for sharing your story and tips you learned the hard way! I could relate to this as I went through something similar. I thought I was trained enough for Hood to Coast and I wasn’t. I ended up injuring myself–the IT Band just like Becky–and it was a huge learning experience for me. I realize how much I was running and NOT cross training (like doing weights).

QUESTION: Are you currently training for a Half Marathon? How did you plan your training plan? Are you cross training?