One of the cool things about being an adult is being able to make your own traditions. For a long time, my favorite traditions were with friends and family, often including an off-color Christmas movie (Die Hard, The Ref, Scrooged, Bridget Jones’s Diary) and lots of eating. Being in a relationship means melding together traditions. This year Michael and I both had Christmas Eve off from work. His office was closed, I took a vacation day. We kind of went about our mornings doing whatever we wanted (I went to physical therapy and then swimming) and he finished shopping. 🙂

Then we went to lunch together, courtesy of his great aunt, and to a movie. We saw “Jack Reacher.” I was skeptical going in because I LOVE the books. Jack Reacher has been one of my absolute favorite book characters for about 15 years now. When I heard that Tom Cruise was going to play him, I was so disappointed. I mean, really? Reacher is like 6’6 in the movies, menacing and dark and mysterious. Those words do not describe Tom Cruise. But I went into the movie trying to think of it as just another action flick. Thankfully, I was not disappointed! While I couldn’t get it out of my head that I was watching Tom Cruise, I liked the movie a lot. It stayed pretty close to the books and characters, the writing and plot were excellent and there weren’t any cheesy action movie scenes that make you roll your eyes. There was also a pretty kick-ass car chase scene (I need a Camaro). Michael loved the movie, and has never read the books. So in the end….I do recommend it, even though it’s Tom Cruise. 😉

After the movie we still had the whole afternoon free so I baked some Christmas cookies to give to his family as gifts, and to take into work to share after the holiday. Michael kept me company as I baked. I don’t bake as often as I used to for one simple reason: I don’t want the treats in my house. But this gave me an excuse to bake something because I was giving them away! 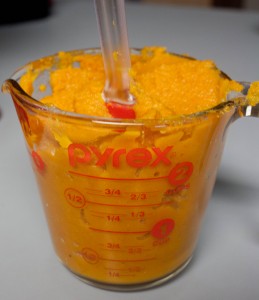 The recipe turned out really well. I definitely recommend it for a fall or holiday party/occasion.

A few things to note: This recipe most definitely does NOT make 12. It makes about double that. So the calorie count is way off if you go by 12 servings. I don’t know about you, but I don’t make giant cookies. Mine are somewhere between small and normal sized!!! I got 30 cookies out of this recipe (because I thought there were 12 servings in it, so I doubled the recipe…oooops). Because I got more cookies out of the recipe, I calculate it at around 170 calories per cookie instead of 425. Much better. 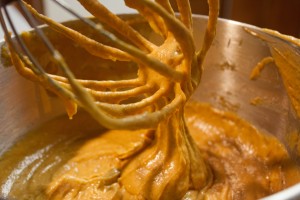 Also, I used a mixture of Splenda Blend and regular sugar, and I also added some nutmeg. The kitchen smelled wonderful! It smelled like pumpkin pie was baking in the oven. How were the cookies? They were great! They were soft and almost cake-like instead of dense like a chocolate chip cookie. Perfect blend of pumpkin and chocolate. 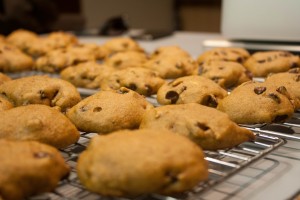 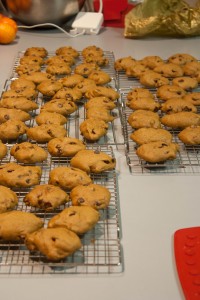 I let the cookies cool down and then wrapped them in festive tissue paper to get out of my house!! No temptations! Since I accidentally doubled the recipe, I needed to get rid of more cookies. So Michael and I played Santa and dropped some off at our neighbor’s house. 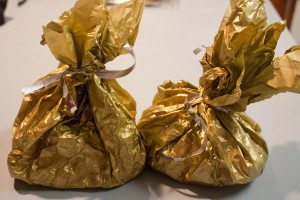 Michael built a fire in the fireplace and we watched National Lampoon’s Christmas Vacation (a classic!). Then we opened the cards we got each other. When we first started dating, I told him I liked exchanging cards on Christmas, birthdays and anniversaries. And I expected more than just his name in the card. LOL I trained him well. Now I can expect a lovely heartfelt note from him 3 times a year. I love it! 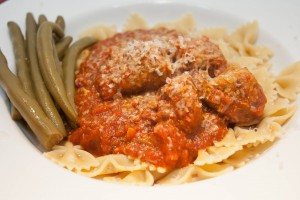 Christmas Eve dinner was leftover Barilla farfalle pasta with homemade turkey meatballs, some pickled green beans on the side and a nice glass of red wine. Sounds a bit weird, but it all tasted great. Later that evening some neighborhood kids came caroling! I love making our own traditions aka doing whatever we want!

QUESTION: What are some of your holiday traditions?