Remember last week when I talked about being burned out? Yeah, I ended up getting sick! Last Wednesday, after a week of feeling unusual muscle soreness and lethargy (that I attributed to winter depression and stress) I realized I was getting sick. I went to the Warrior Room for a Isolation/Tabata class and it was such a struggle. I’ve never struggled that much in a class before. I was tired, felt weak and my heart rate would not recover. My muscles were failing. I realized when I got home that I was probably getting sick.

It happened so fast. Within about 4 hours of getting home from the gym I felt sick–swollen glands, sinus pain, the whole thing. Yep, I was sick. I ended up getting a head cold and was home sick Thursday and Friday. I felt like total crap! I was drinking Emergen-C, doing the Neti Pot thing 3x a day (gross), sucking on echinacea and zinc lozenges. Thankfully I also had another blogger friend who was also down with the sickness who was playing Words With Friends with me. Deb is awesome. We usually have about 2 games going at once and we’re pretty evenly matched. The scores often come down to 5-25 point differences.

Even so, I feel like I’ve spent most of February on the couch. First with being snowed in and now with this cold. I’m so ready for warmer weather and better health! On Thursday night Michael brought home some Thai food for dinner. When I get a cold all I want is spicy food. 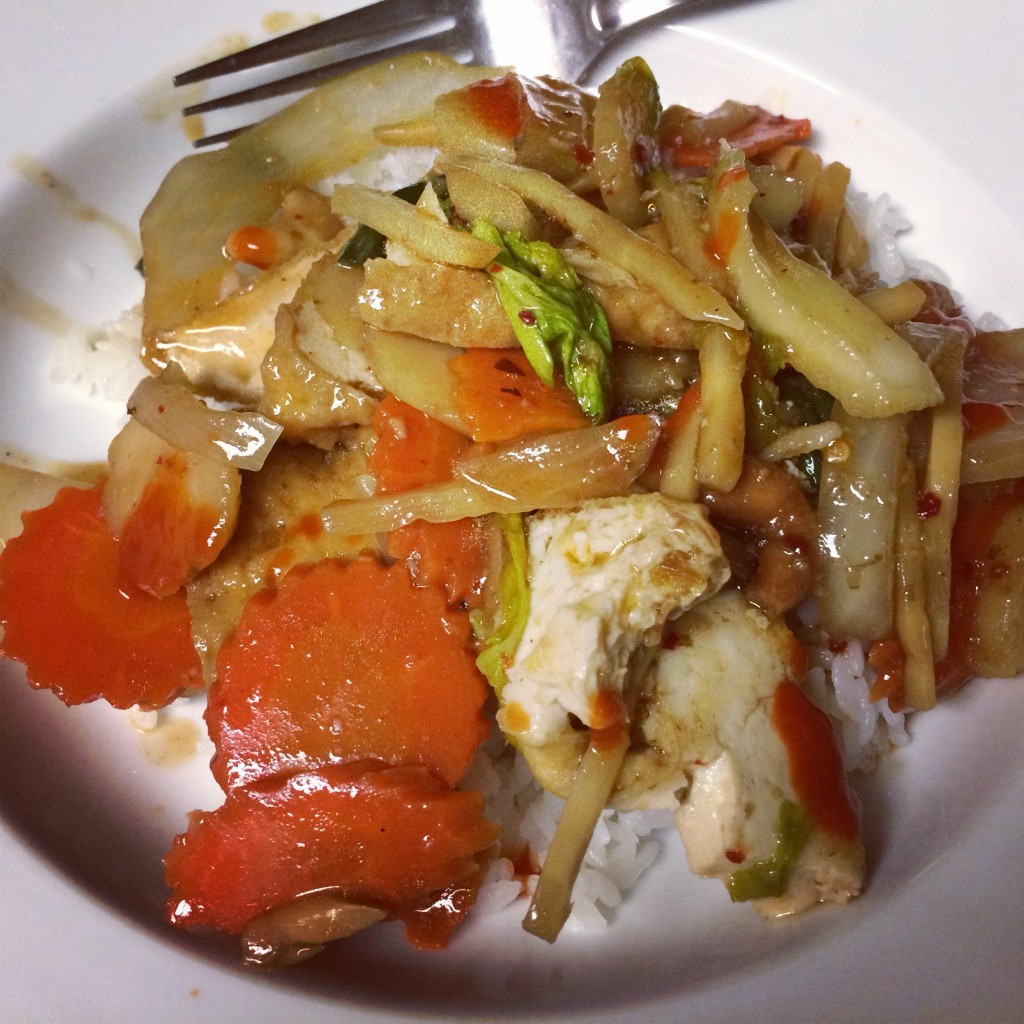 He went to Buathong Thai. I got the spicy cashew dish with tofu. It was loaded with vegetables. I loved it! It was so tasty, not overly greasy and the cashews added some great crunch to the dish. It came with jasmine rice. Even though it said it was “spicy” it wasn’t spicy so I added a ton of sriracha to it. It really hit the spot.

One good thing about laying on the couch all day long was that I had company! Fat Kitty came out and Bella laid down at my feet. All three of us fell asleep on the couch for a good hour. It made me smile that the beasts were getting along. 🙂 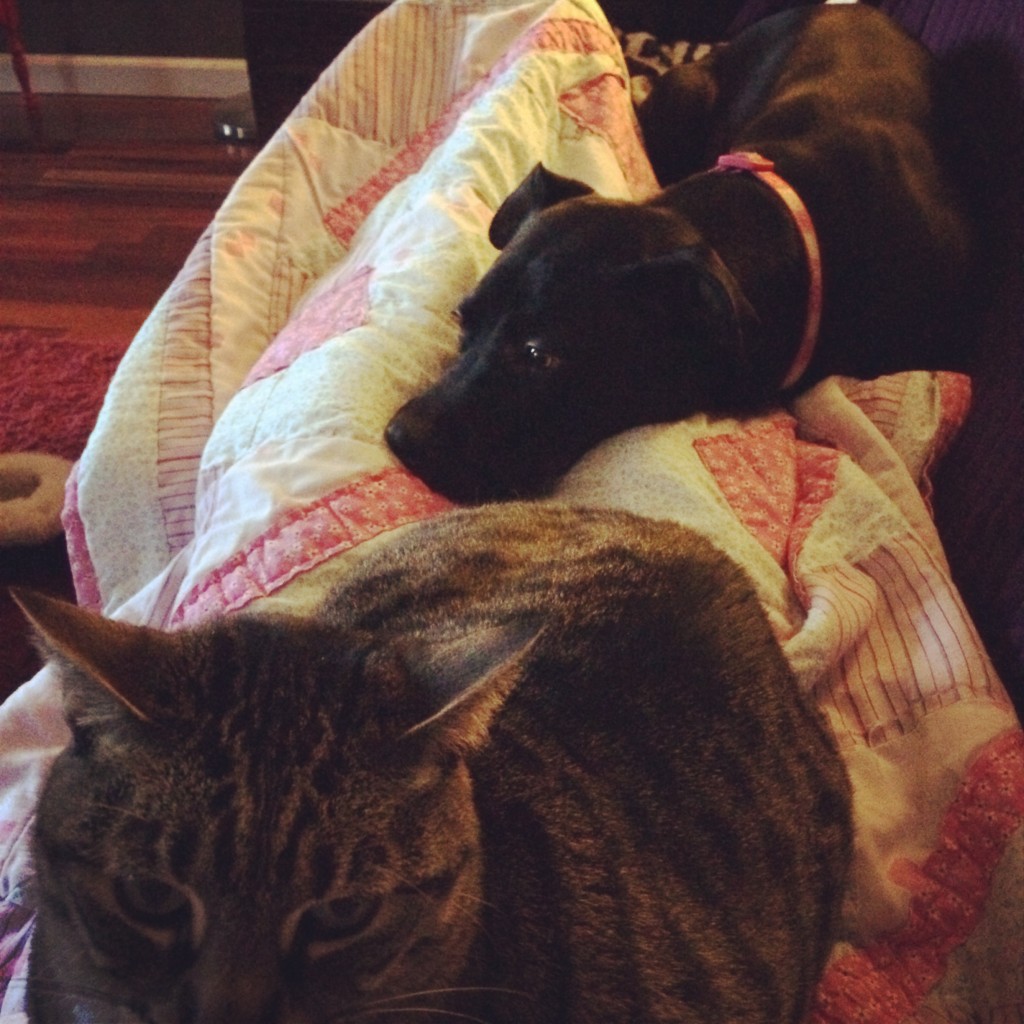 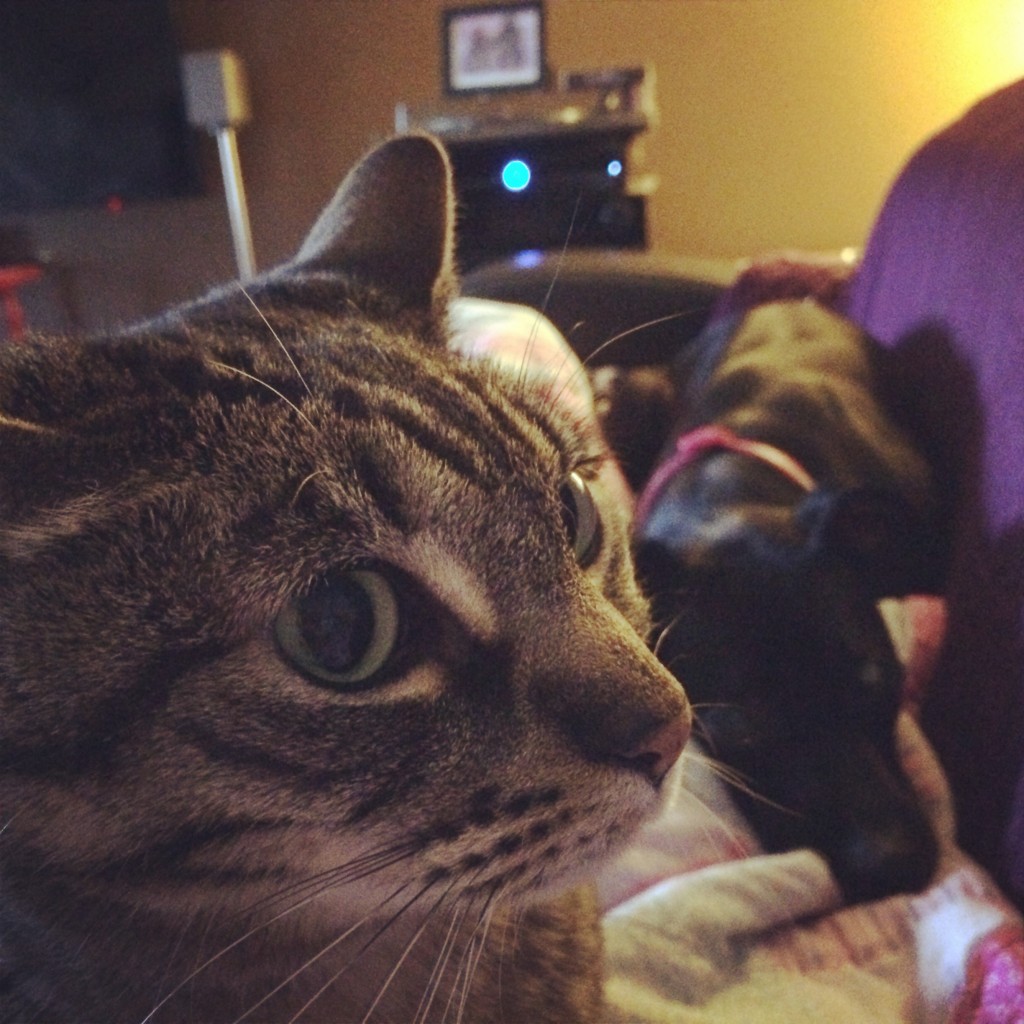 Valentine’s Day was pretty much cancelled since I was sick. Kind of a bummer, but oh well. We already had massages scheduled and I was happy we didn’t cancel them. The massage felt so good–my sore, achy muscles felt a lot better afterward. I went to sleep right after the massage and ended up sleeping for 12 hours! Apparently that’s what I needed!

Unfortunately while I was starting to feel better, Michael got sick. It hit him a lot harder–fever, cough. It’s now Tuesday and he’s still pretty sick! 🙁

By Sunday I was feeling a million times better. I went swimming and it was fine–I hadn’t lost any swimming fitness, it wasn’t hard, it was all the same. But afterward? I was exhausted. I could have used a nap. I think I went back to the normal routine too early. Oh well, lesson learned. Monday I treated myself to a pedicure (after 6 months of not having one!) and just read my book while I got it. It was nice and relaxing.

Then I picked up my wedding dress! I went to the seamstress’s house for a fitting. She’d adjust the straps, fixed the ripped hem and also added an inch to the back panel. All easy fixes. The dress was from a used wedding boutique and I have no issues with buying a used dress. Now I just need to get it cleaned and sealed until the wedding.

I’m ready to feel better and get back to normal!