We got roma tomatoes this year in order to make salsa. It was a little early for tomatoes. I had about one bowl full of ripe tomatoes which came out to be almost 2 pounds (almost 5 cups, which the recipe called for. I was 1 cup off so I added one can of diced tomatoes to make it 5 cups). The jalapenos and anaheim peppers also came from our garden. I had a mixture of green and red jalapenos. 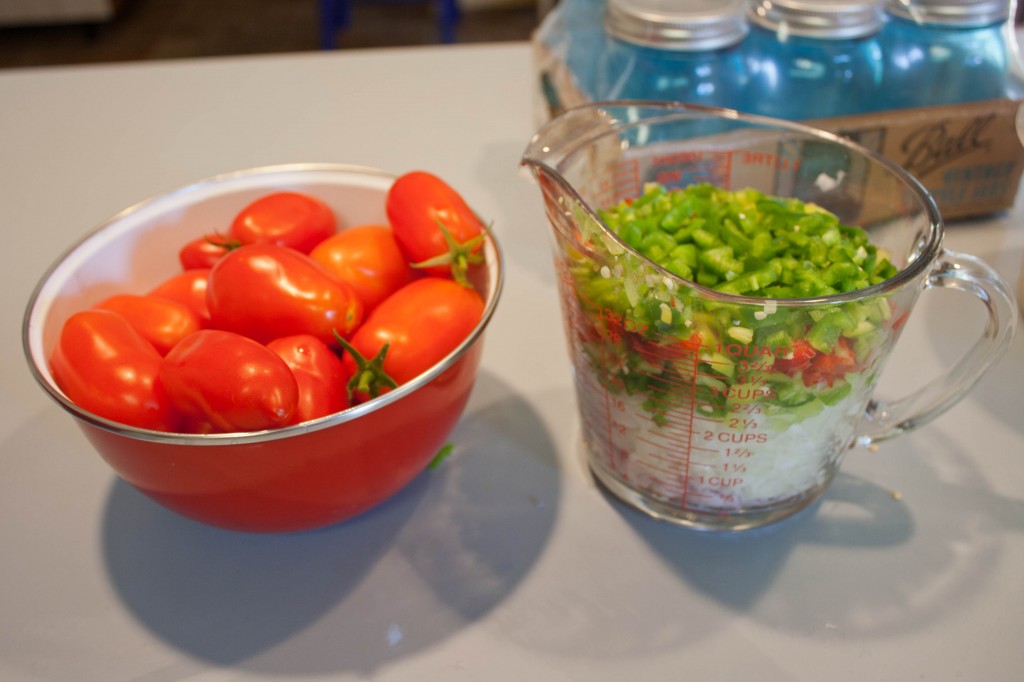 I found this recipe online and it turned out to be very similar to the recipe in the canning cookbook that came with my kit. I had 6 new jars for canning. I followed the instructions and ended up filling 5 jars (and two of them weren’t as full as they could have been). It was weird that there was a discrepancy between the servings it created. But anyways, here is the recipe:

It was very time consuming but fun. I put on some music (which may or may not have been Miami Sound Machine and Cyndi Lauper) and got started. First I prepped the stuff I needed to chop. I diced the onion (using red and yellow), minced garlic and then got some latex gloves (smart! smart!) to dice up the jalapenos. 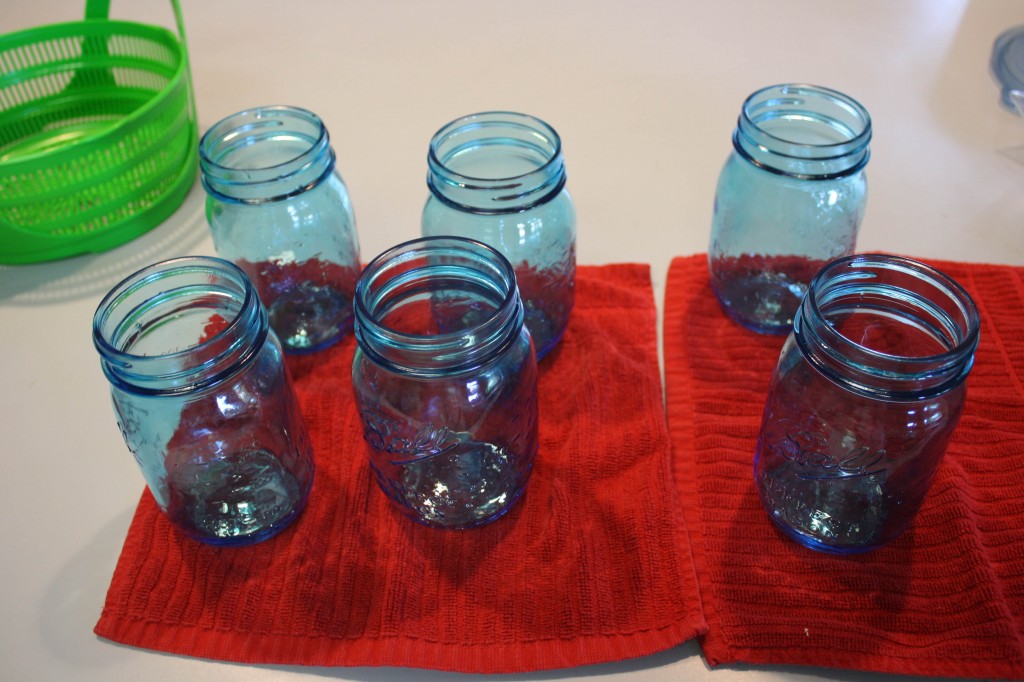 Then came time to clean and prep the jars. I let them simmer to keep warm while I took care of the tomatoes. I had no idea it was so difficult to skin the tomatoes. I went to Google and found a video that showed some tricks and used one of them: add the tomatoes to almost boiling water, let them sit in the hot water for a minute or two then add them to a bowl of cold water. They were super easy to peel then. 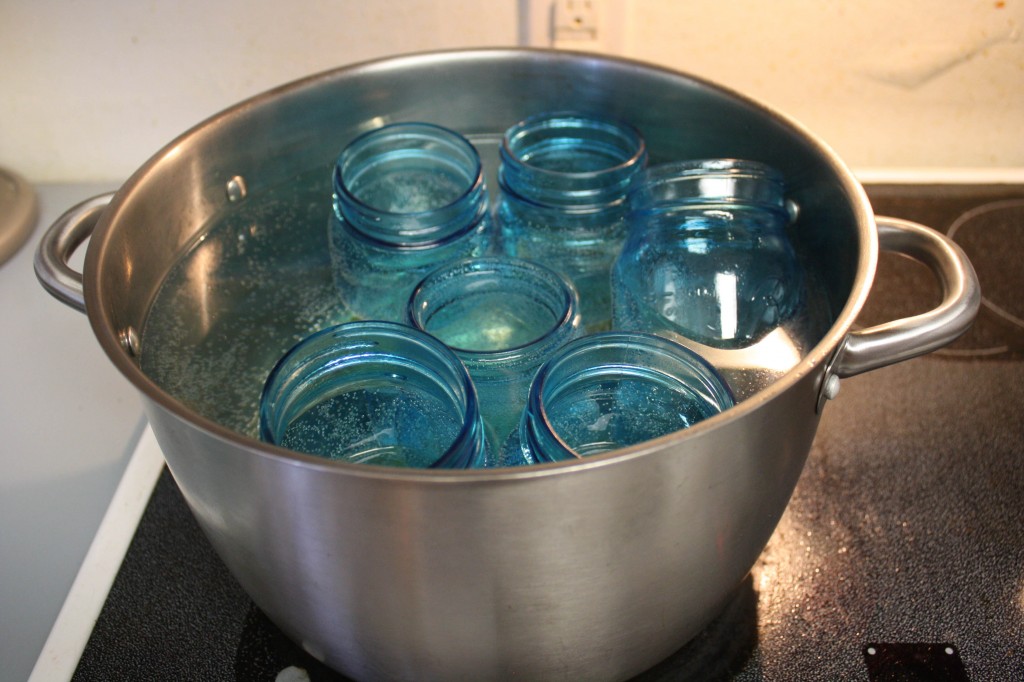 Once everything was chopped and ready, I put the mixture into another pot and cooked it for like 10-12 minutes or so, per the instructions.  It smelled so good! Our jalapenos are very spicy, so I bet the salsa is gonna be spicy…even so, I did add a small splash of Aardvark sauce to the mixture (it said you could add some hot sauce). I mixed it constantly while it cooked. 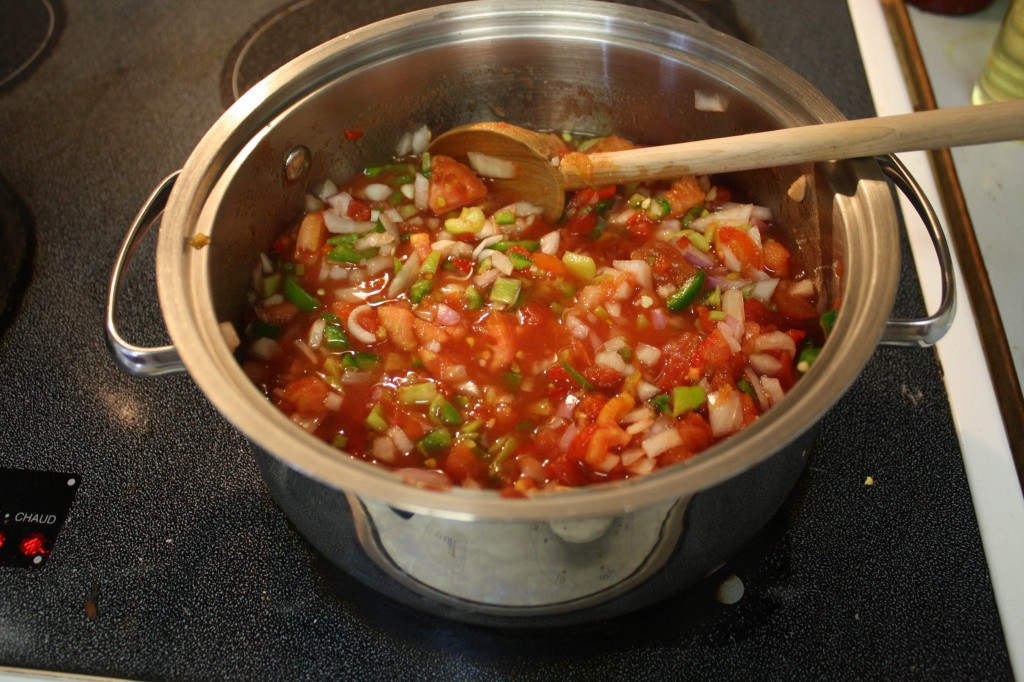 I also added a little bit of this stuff: 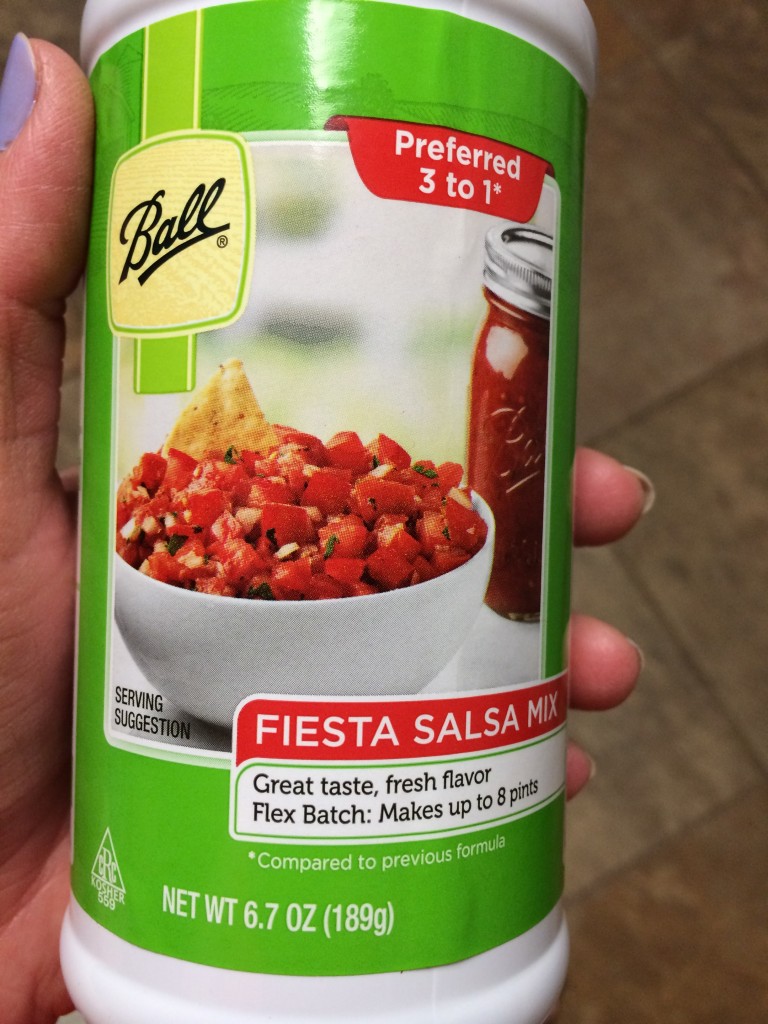 It’s a salsa mixture meant for canning. It basically has some spices (onion powder, garlic powder) and dehydrated green bell peppers. It smelled pretty good. I mixed it all in and once it was done cooking it was time to ladle the salsa into jars. This was the hard part, honestly. The jars were flaming hot, the openings were really small and too small for the ladle. I put on my oven mitts and that made it even harder to hold onto the jars. But despite that, I was able to get everything into the jars. 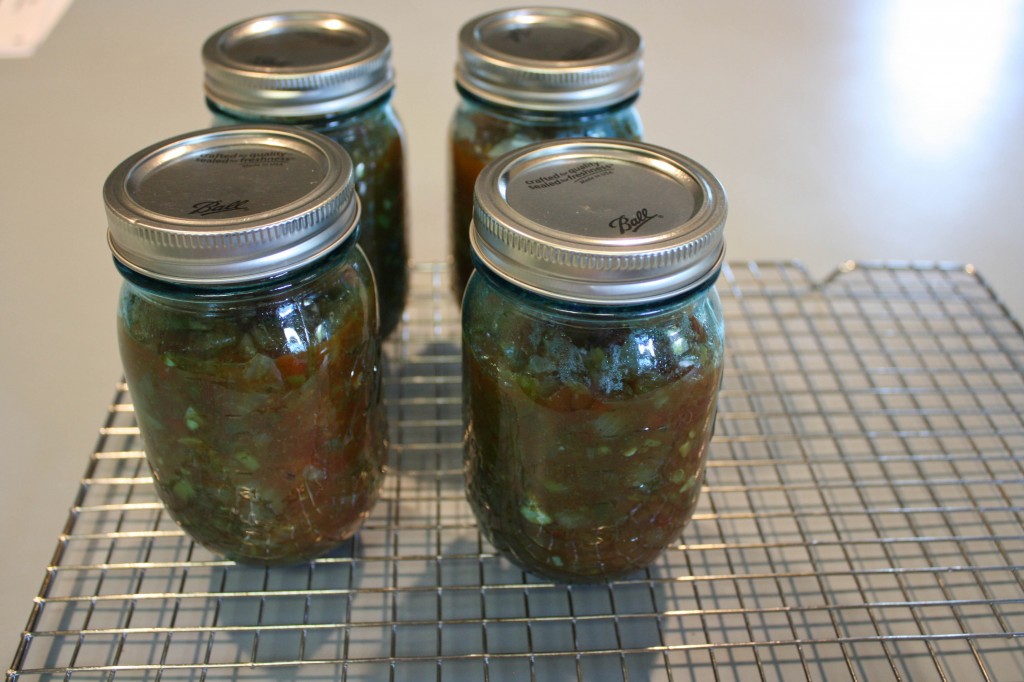 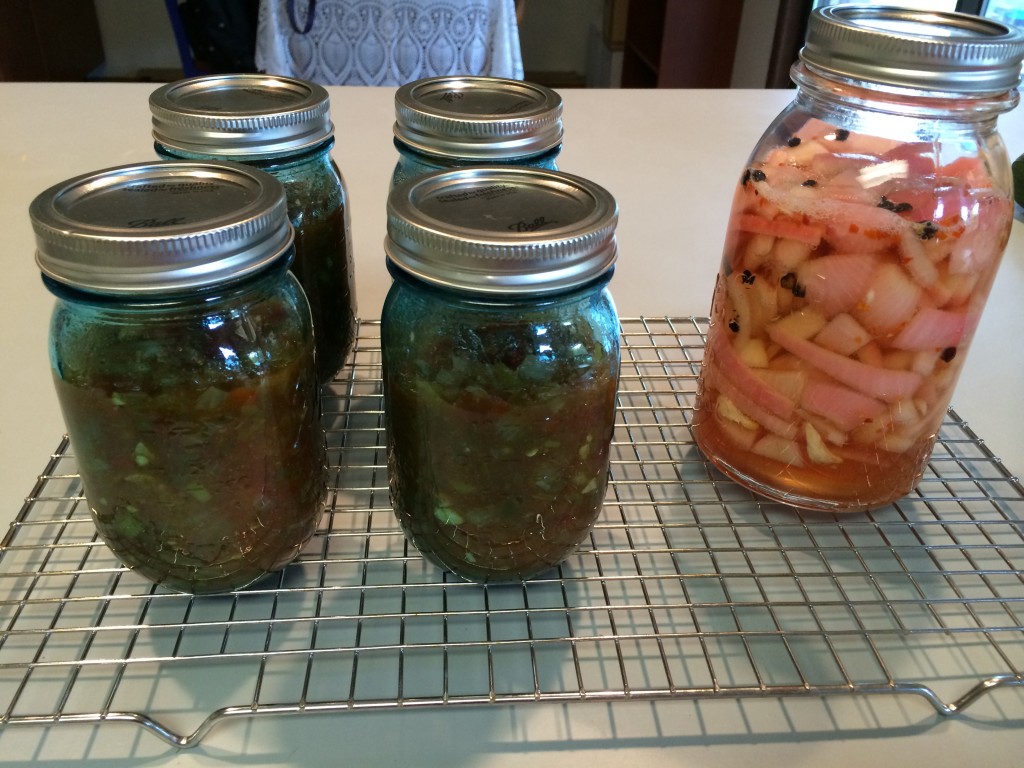 I put the jars into the giant pot to seal. When I took them out after 20 minutes only one of the four was sealed properly. I was super bummed out and then a minute later, POP. The other three sealed. It was very weird! So they all sealed properly. I let them cool all evening and then into the pantry they went. One jar that I did not seal went into the fridge for later testing. 😀 I also made some more of those amazing pickled red onions I did and sealed them in the canning kit to have later this winter.

How was the salsa? 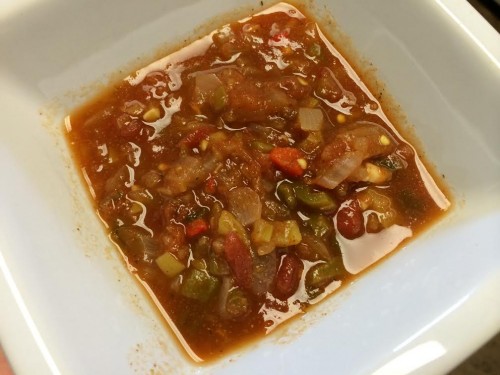 It smelled amazing! I was excited to give it a go so Michael and I made nachos for dinner. Just simple nachos with Colby Jack cheese, black olives, and pickled jalapenos from the garden. Had some sour cream and my salsa on the side for dipping. 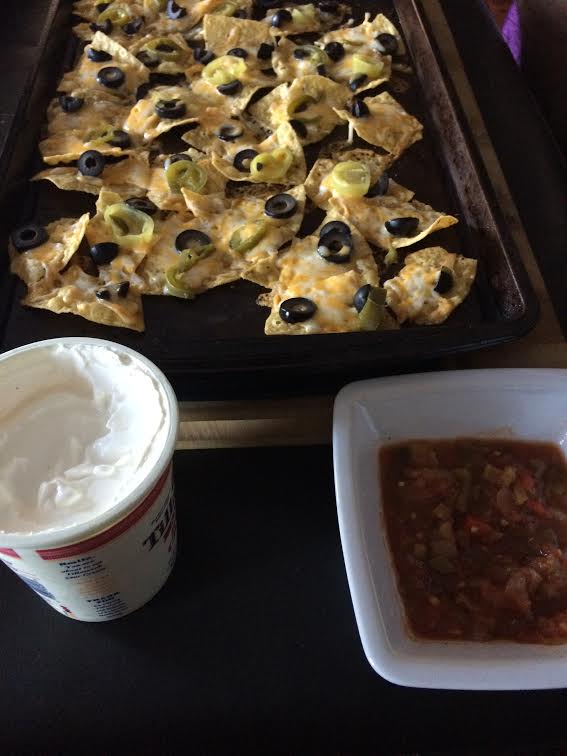 The salsa was GREAT! It tasted so good and wasn’t too spicy, something I worried about using our jalapenos (which are exceptionally hot this year). Loved the salsa! It was definitely a success. Action shot: 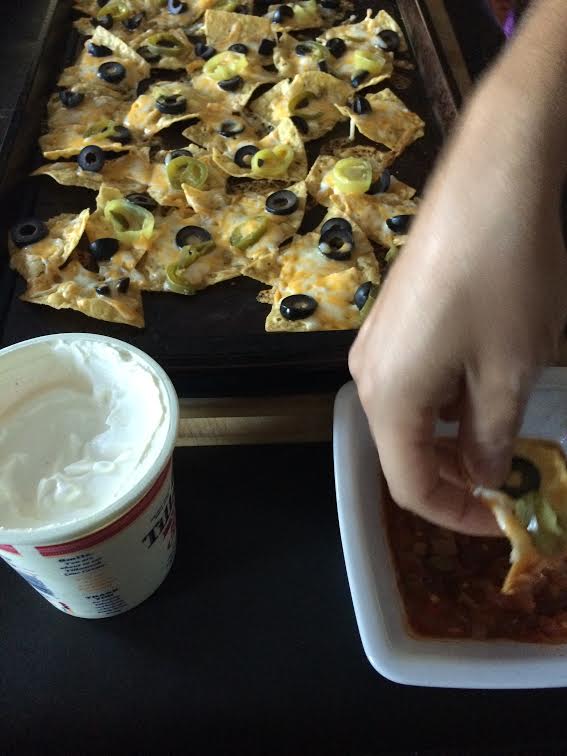 Yum! The salsa was great, or in the words of my future husband “that salsa was fucking awesome.” I am excited that it was a success and plan on making more. The one downside is that it is SO time consuming. It took me about 3 hours to do the whole process and only got 5 jars out of it. I think once the tomatoes are all ripe, I’ll do another batch of salsa and then focus on just canning the tomatoes whole to make sauces with later.

Do you have a favorite canning or salsa recipe to share?

What Would You Order?