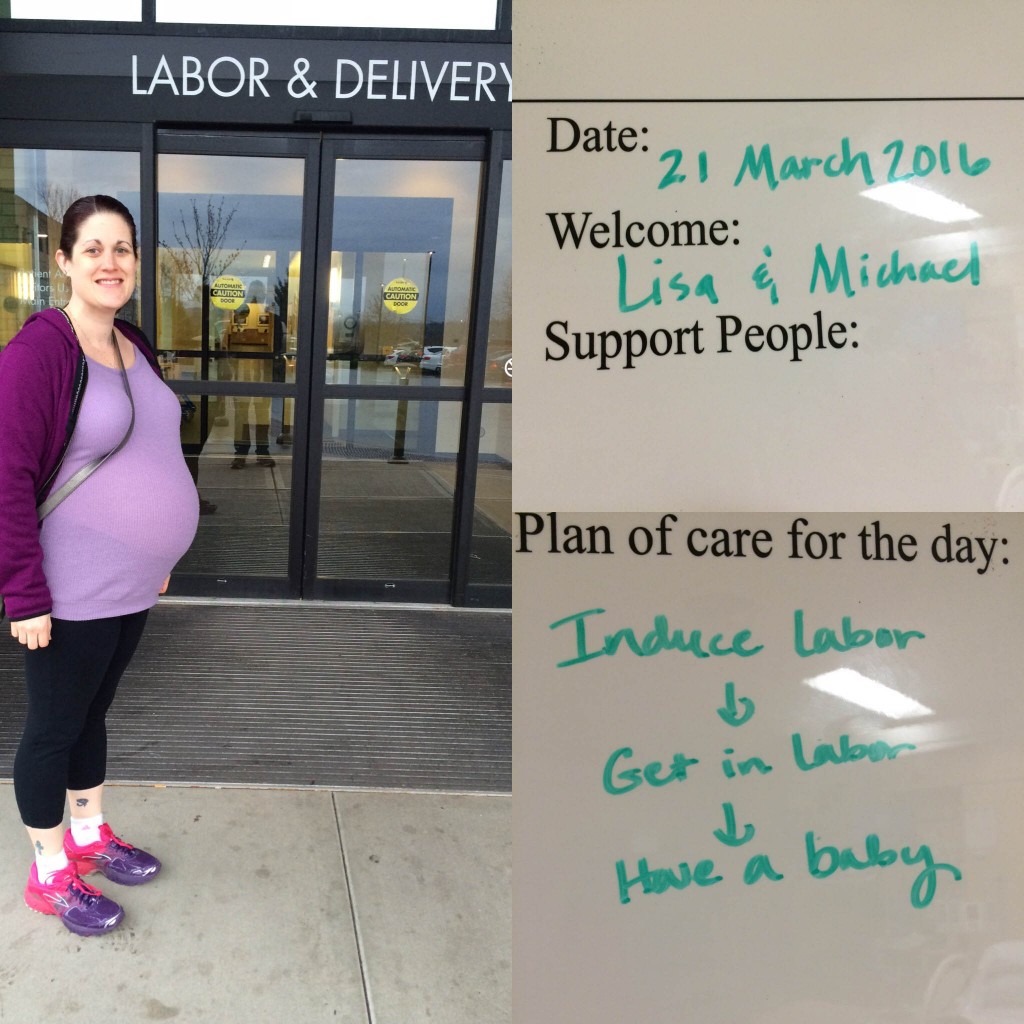 Over the weekend I had a lot of emotions about our scheduled induction. Part of me tried not to think about it because I was admittedly disappointed that labor hadn’t started on its own after a month of false starts. I felt like somehow we were being robbed of the magical experience of “SURPRISE! You are in labor!” And even though my birth plan was pretty minimal and go with the flow, I still wanted certain experiences and I wanted to be able to do the early labor stuff at home instead of spending the entire time at the hospital.

Monday March 21st came and I was still a little teary about the whole process but I was also excited and just ready to get this show on the road. I was at 40 weeks and 6 days. We got up early, showered, ate breakfast, Michael packed the last of his stuff, I took Bella for a walk in the drizzle and ran into a neighbor who asked if I had a bowling ball in my shirt. 😉 He apparently hadn’t noticed that I was pregnant. It was pretty funny. He asked me when I was due and I said “last week.” 😉

And then we went to the hospital and checked in.

We got there at 8am and the “stuff” didn’t actually start for like 2 hours. They weighed me, took me to our room, we got settled and I changed into a gown. The nurse, Jacqueline, who would be with us most of Monday, did a bunch of tests, blood work, got an IV started, explained some stuff, did charting and asked a lot of questions. Then the midwife, Helen, who was amazing and had a lovely British accent and was very mothering, came in and explained the options for induction.

The miso pill thing wasn’t going to be the first step, like my midwife had thought. I was okay with whatever, honestly. She did an exam and I was still at 2cm dilated but 80% effaced. She said my cervix was very soft and the station was just right but that my body still needed the jump start. She suggested we do the foley catheter balloon. 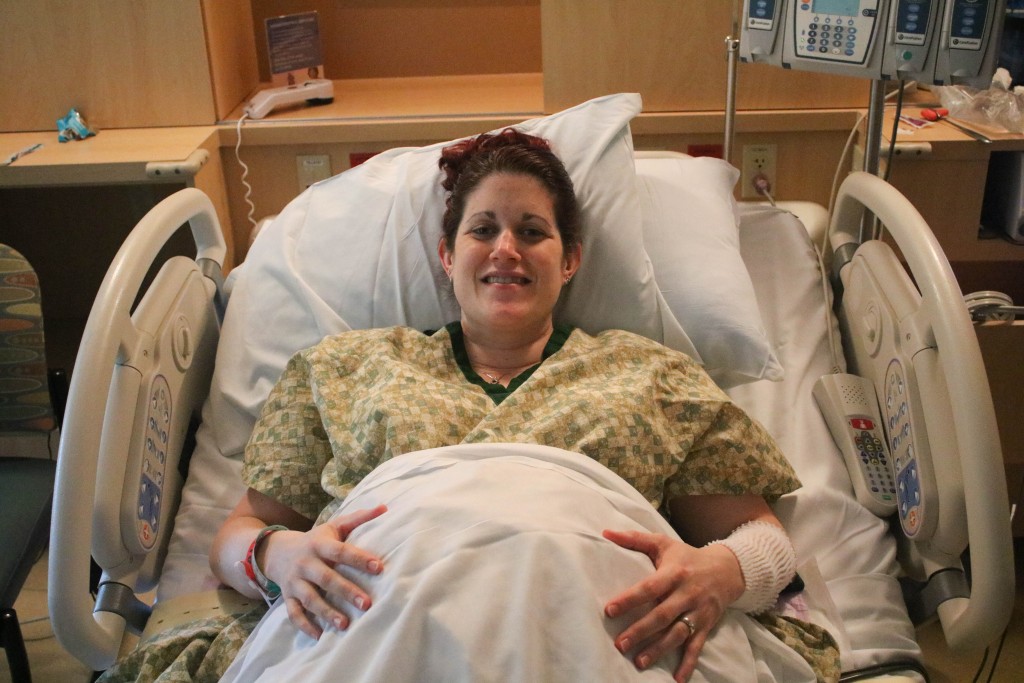 They insert the deflated balloon into the cervix and then it inflates with saline I think. It sits in there and expands the cervix to try and start contractions and dilation. It was slightly uncomfortable but more creepy and weird than anything else. It hung out and was taped to the inside of my leg. I could get up and move around but it was uncomfortable and I felt like I was going to rip it out or something, so I mostly stayed in bed. The contractions were irregular and slightly painful but not too bad (compared to later!).

Michael and I finished watching House of Cards on Netflix and started watching Daredevil to kill time. I kind of rested and dozed off and on while having some contractions. This lasted  for about three hours I think and then I got up to move around a bit, felt some blood running down my leg and then the balloon fell out (like it was supposed to do). 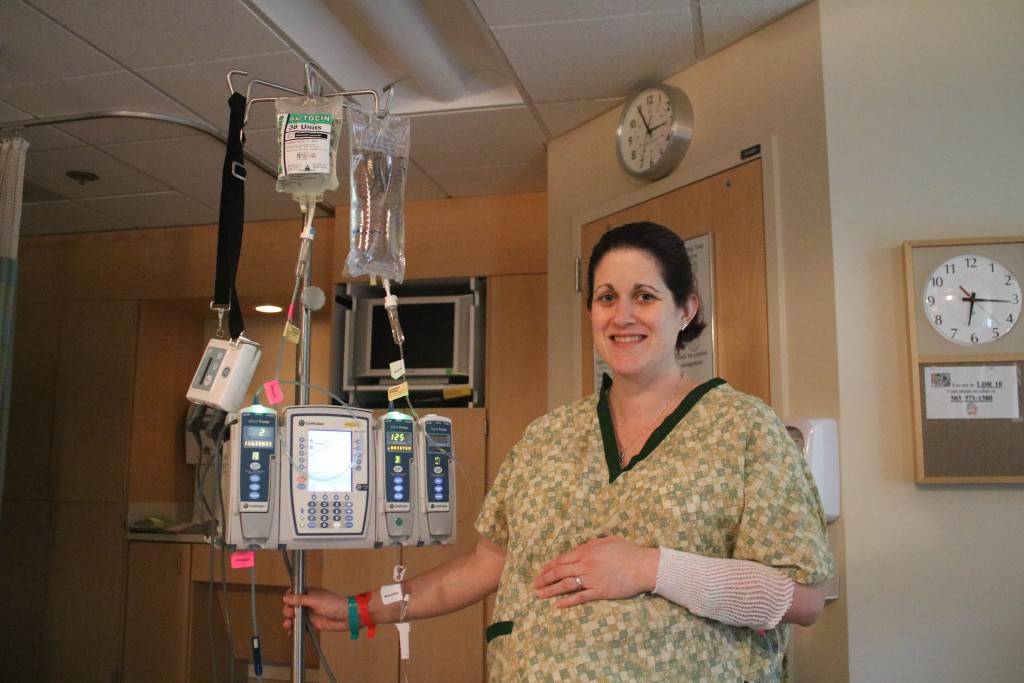 Next the nurse got me started on pitocin. This was a VERY slow process and I think that started around 11 or 12 and lasted the rest of the day into the evening. They came in and slowly increased the amount every hour I think.

I got some lunch at the hospital. Mac n’ cheese with small Caesar salad, juice and lemon bars. 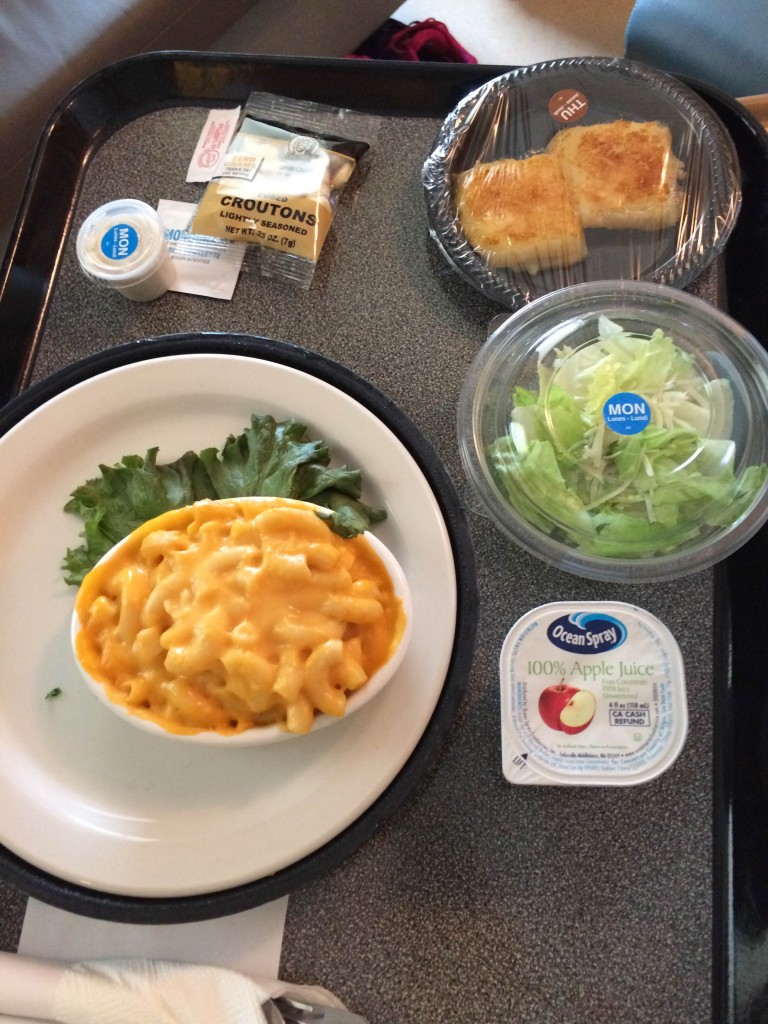 A few hours later got a snack of an egg, spinach and tomato breakfast sandwich with a banana, more juice and a piece of apple pie (which I didn’t end up eating until the next day–more on that soon!). We also had snacks that we brought from home: protein bars, cashews, Trader Joe’s version of Swedish Fish, gatorade, lots of water. 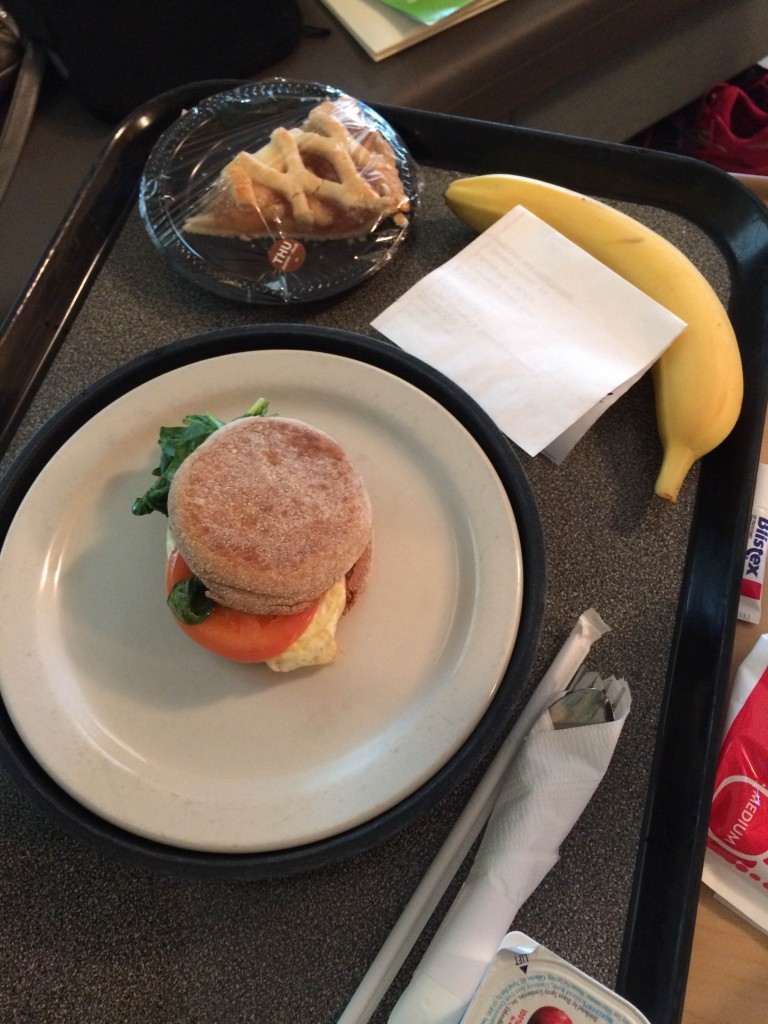 The contractions with the pitocin were pretty regular, like every 3-5 minutes and while they were painful they were manageable. I was hooked up to the baby heart rate monitor and contraction monitor the entire time I was at the hospital and it was kind of weird to constantly hear the heartbeat on the machine. It was just a constant, rhythmic, ambient noise kind of thing. 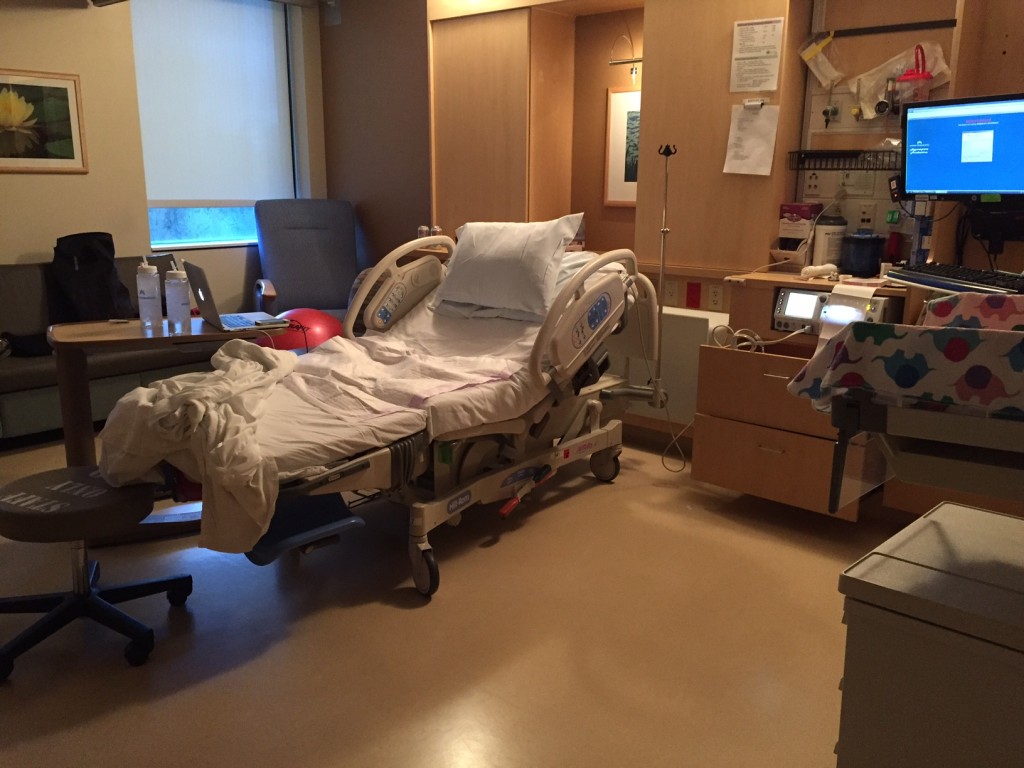 We checked out the birthing balls–they had a bunch of different sizes and shapes and my plan was to use that when labor got intense. We picked one out and brought it back to the room but whenever I sat on in it, the baby heart rate monitor didn’t work so unfortunately I didn’t get to use it as much as I wanted to. The monitor only picked up his heart beat when I was standing or laying down.

Around 7:30 Michael went out to get some real food. Of course while he was gone the midwife came in to talk about the next steps! Thankfully he came back pretty much at the right time to hear the news–but not the perfect time for either of us to eat. So he ate his steak taco salad as quickly as he possibly could while the new midwife (shift change), Hannah, explained what was next.

She wanted to do a cervical check again and see where I was at with the pitocin. She said there was a risk of infection with too many checks so this was kind of going to be the time to either check and break the water, or wait a little longer. But we couldn’t check and delay breaking the water.

She checked and I was only dilated to 3cm at 8pm! 3?! After ALL DAY of contractions and pitocin?? It was really hard not to feel disappointed and like…really? What is going on?? She said that was normal though and not a big deal. That sometimes the dilation goes fast at the very end. She broke my water with the tool that looks like a crochet hook (scary) and all of a sudden there was a gush of HOT liquid. So all those months that I had a fear of my water breaking somewhere “inconvenient” (like at work, or on the bus) or wondering if I wouldn’t be able to tell if my water broke…it was obvious.

We had talked about pain management options and the new nurse that came on shift, Georgina, said that it would be a wise option to consider pain medication when the water broke because that was when the contractions would get really intense. I felt like I had time–if that makes sense. I didn’t imagine that the pain would be IMMEDIATE.

Well, it was pretty much immediate.

My water broke and the contractions were two minutes apart like clockwork and they were excruciating. Absolutely take your breathe away, feel like you might pass out from the pain, excruciating. I was sitting on the birth ball at this point and Michael tried to rub my back during the contractions but that wasn’t helping take the pain away.

I asked the nurse if we could use the hot tub and so she went off to get that going. It seemed to take a really long time. I’d say it was like 15-30 minutes before the tub was ready. That was such a long time. Lots of painful contractions. She finally came back and said it was ready. I was hooked up to stuff so we wheeled down the hall to the dark room with the tub. It was peaceful and quiet and the darkness was nice. 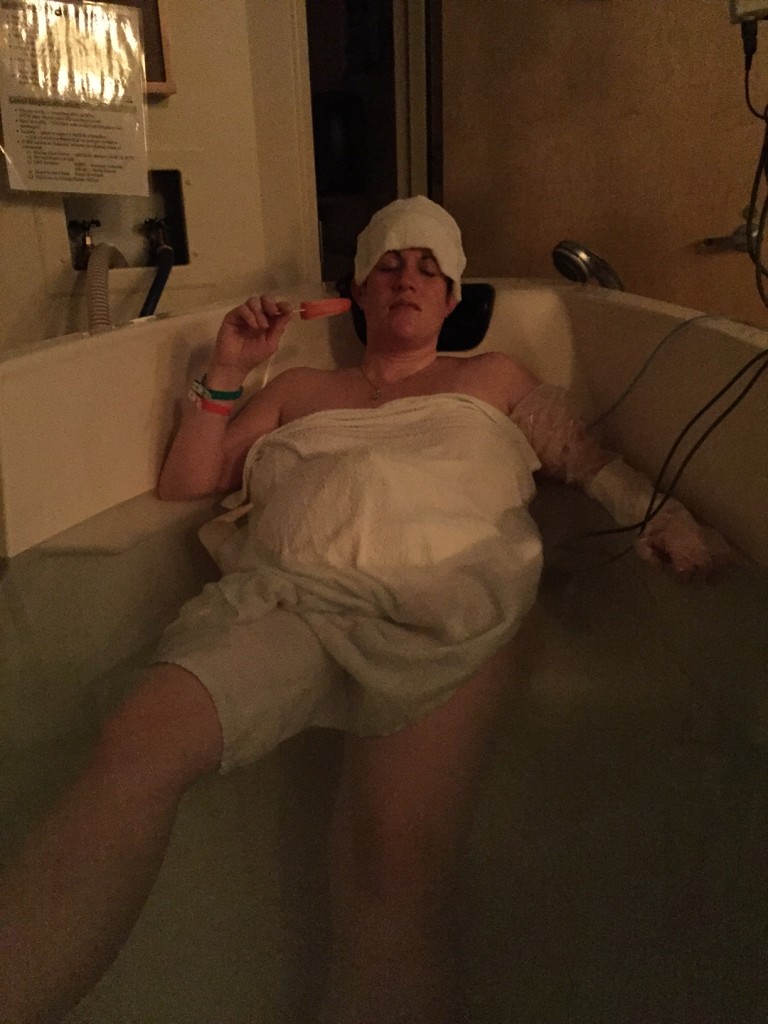 I got into the tub and the hot water immediately felt amazing. It was hard to get a good comfortable position but the water felt great. Michael kept putting cold wash cloths on my forehead and face and the nurse put hot towels on my body that was exposed to air. It felt wonderful….until the next contraction would come. Basically it helped relax me in between them but didn’t do much for the pain.

Michael tried to distract me during contractions with stories. I have no idea now what he was saying, other than I remember he started off with telling me about something in the news about sports doping… 😉 I mean, drugs were definitely on both of our minds!

The nurse came back and gave me a popsicle. For some odd reason it kind of helped. I have no idea why. I think I spent about an hour total in the tub. About mid-way through the contractions were getting so bad I realized it was time for medication. Knowing the epidural would take awhile to get set up and that I would be in the bed the rest of the time, we asked the nurse for IV drugs in the meantime. I figured I’d have to get out of the tub for that but she said I didn’t and came back 10 minutes later with the fentanyl and hooked it up to my IV.

I think this is a good place to pause. I’m trying to get all my thoughts organized (and I’m glad in my “downtime” I made little notes in my phone because now, everything is a foggy haze and details are hard to remember without the notes!). I will post the last part soon!