Thursday I had my appointment with the Sports Medicine doctor. 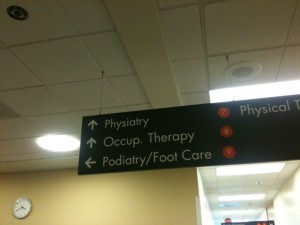 My experience at Physiatry was 100% better than the physical therapist. The nurse who checked me in and took my blood pressure (121/68) was a riot. When I made the appointment, they told me to wear shorts and tennis shoes. So that’s what I wore. She saw my shorts and started clapping and said “Thank you for wearing shorts!” I guess most people ignore that advice.

The doctor I saw was also pretty hilarious. He had a great personality. He was friendly, he listened to my story, asked the right questions, and was just a plain nice guy. I knew the appointment was going to go well. 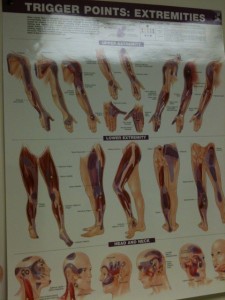 I told him about my training, how I cross-trained, what I’ve been doing since the injury (swimming and weights). I described Hood to Coast and my injury. 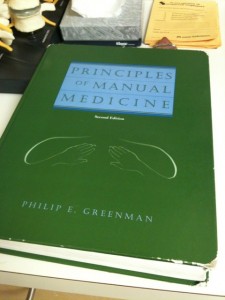 He had me do a bunch of tests to see how strong my hips, legs and IT Band were. He said that my right side wasn’t very strong. I also explained to him that I was told by my doctor to stop doing most activities for 6 weeks. He said that wouldn’t have been the advice he’d given me but oh well. I’m not upset because taking a break meant that I tried new things (like weight lifting).

He turned to me and asked, “Do you want the good news or the bad news first?”

My heart fell and I thought I might cry. There was bad news??

“Bursitis is the inflammation of a bursa, which is a fluid-filled sac that provides a cushion between a bone and tissues, such as a ligament. Iliotibial band friction syndrome is a common injury in cyclists and people who participate in physical activities that involve running.” 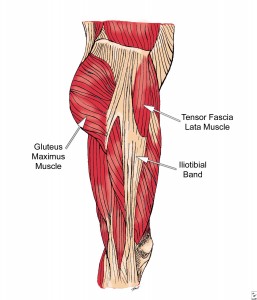 Having a real diagnosis is kind of a relief. I felt much better knowing WHAT was going on with my body, instead of just wondering if I was broken. He said that he could tell not running causes me anxiety and he said that I probably feel like I’m “broken.” So true! It was like he could read my mind. 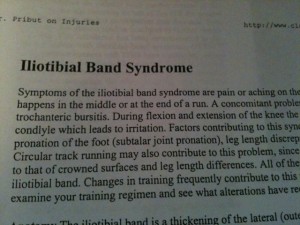 He then showed me a bunch of different strengthening exercises I need to do 3 times a week.

1.Wall Slides: Basically leaning against a wall and stand on one fit, then slowly lower and raise up and down. Hold it for 5 seconds before going back up. He said not to go all the way down either.

2. Sidelying Hip Abduction: Laying on my side, I bend the underneath led and keep the top leg straight. Then raise and lower the top leg. 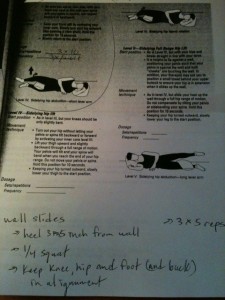 3. Hip Hikes: Standing with one foot on a stair or a thick book, slowly lower the other foot to the floor. No exaggerated hip motion, must stand perfectly straight. 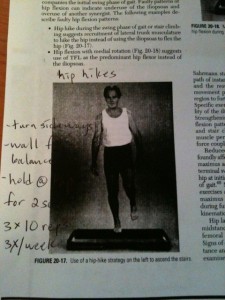 The doctor showed me each exercise to do and had me practice them a few times. Today I was strangely sore in my lower extremities! Clearly those exercises work! 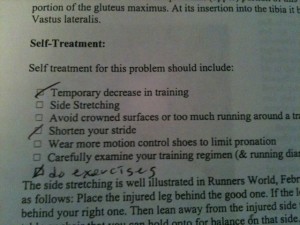 He wrote out a plan for me too. A Get Back to Running Plan!!! 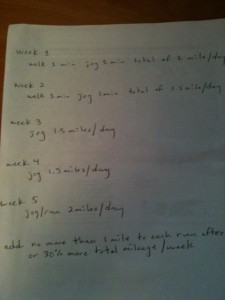 Do three days a week plus my other cross-training:

I am SO excited to have a plan! So for the next five weeks, I am going to continue what I’m currently doing. I will swim 2x a week, go to the gym and do weights 3 times a week…but instead of spending the full hour+ doing weights, I will start incorporating the short jog/walk/run schedule on the treadmill.

QUESTION: How do you strengthen your hips and legs?