The weather here in Oregon has changed to the bone-chilling, static hair-inducing, frozen ground cold. I don’t hate this weather–I hate the rain more–but I will say standing at the bus stop when it’s in the low 30’s is not fun. Despite that, I am happy that winter is here and I am loving the hot cocoa Michael and I are having for dessert.

I recently ordered an ornament on Etsy and it arrived. Here it is: 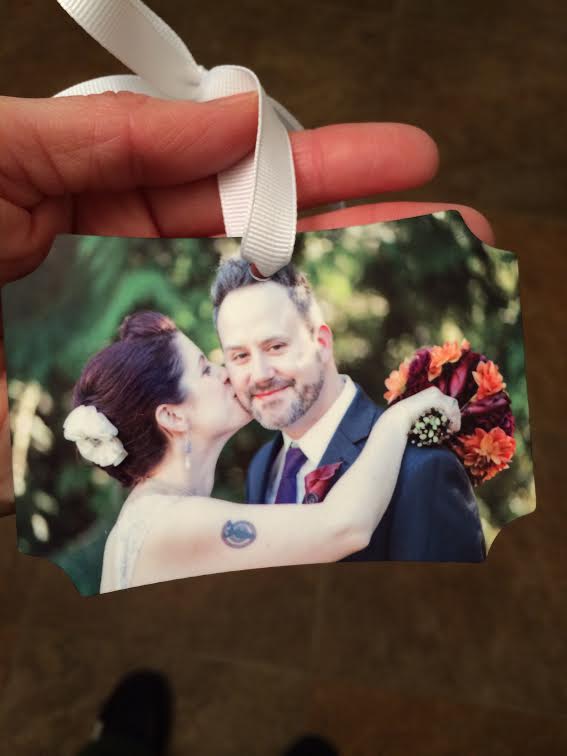 I love how it turned out. On the flip side of the ornament is our name. It’s our first ornament as a married couple. I used one of the professional pictures we got and I’m really happy with it. I also made my own ornaments recently. I did this fun little project in an afternoon and it turned out pretty great so I wanted to share it with you.

This is a Christmas ornament I bought on our honeymoon in Maui: 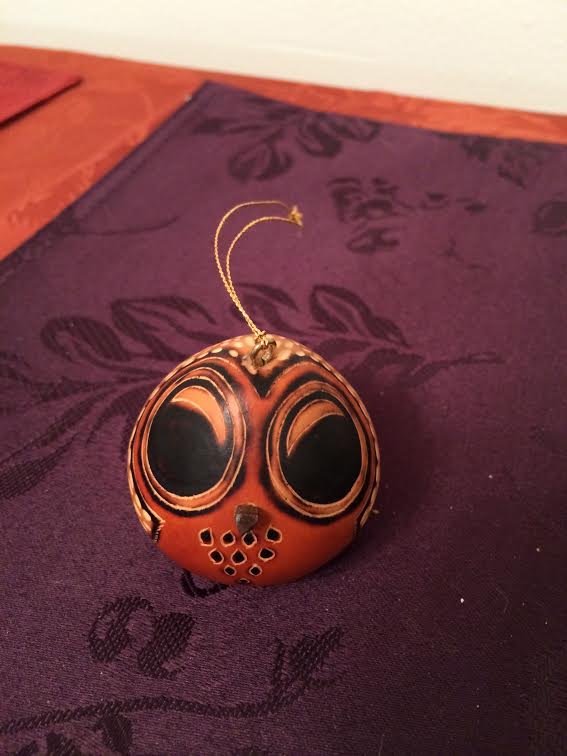 It’s a little owl! It was super cheap (like less than $5) and I found it at an open air craft market in downtown Kihei not far from where we stayed. I found a lot of cheap and cute souvenirs there. Then, out of the blue, a friend of mine sent me a gift that turned out to be an ornament, too! 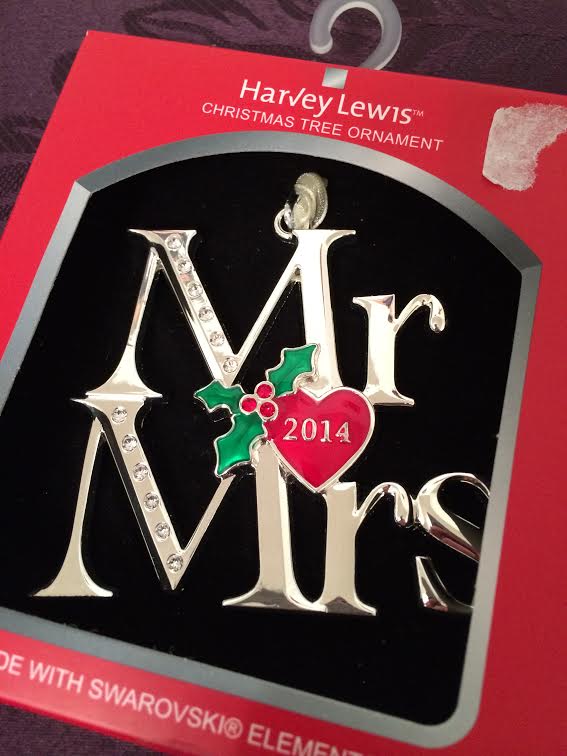 Too cute! Next up: homemade ornaments!

I saw this on Pinterest and it was a cute idea so one day I made up the dough to do dog print ornaments! I have to say, it was quite amusing trying to coerce Bella into letting me take her paw print. I cornered her in the kitchen and tried to coax her into doing it but she wasn’t having any of it. I tricked her back into the kitchen with some treats and I had to actually grab her paw and then press it into the dough. The first time I tried it it was kind of mess so I kneaded the dough again, rolled it out, and tried a second time.

She was much more cooperative and didn’t seem as freaked out!

After the ornaments baked for two hours I let them cool on the rack over night and then went about with the painting. I got a Christmas Red and Christmas Green, basically colored glitter. The first one was kind of a mess and it was my practice one. I realized that the paw print didn’t really show up so I decided to paint the rest of them black first, then go back after it dried to paint the Christmas colors. This was a much better approach. 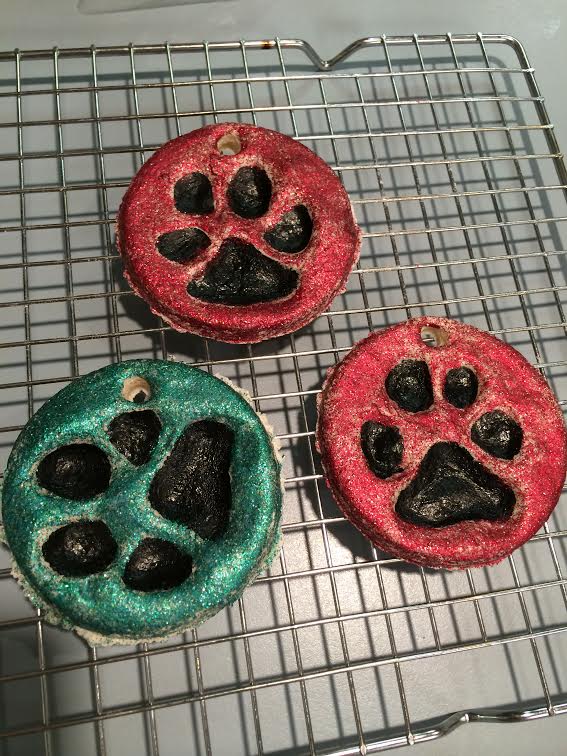 Using the black made the paw print stand out much better. I did a few coats of the paint and then let it dry overnight. I just used some regular ribbon for hanging the ornaments. I made four ornaments and two are gifts for some special people in Bella’s life. 🙂 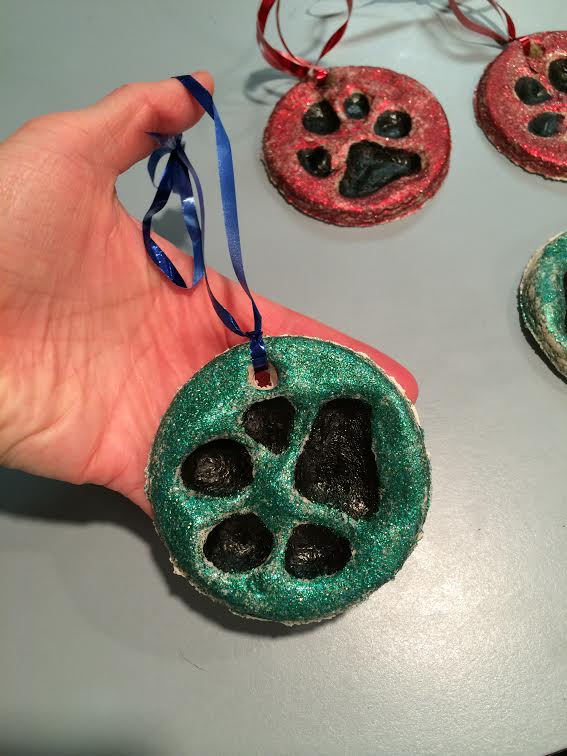 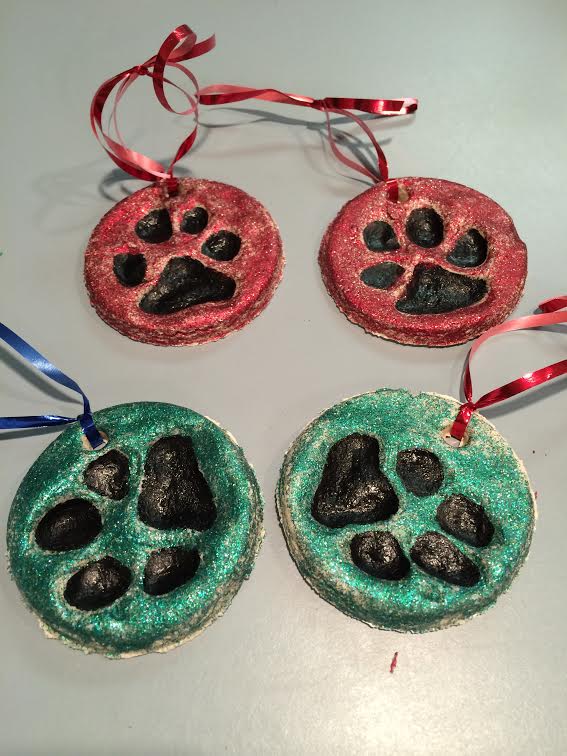 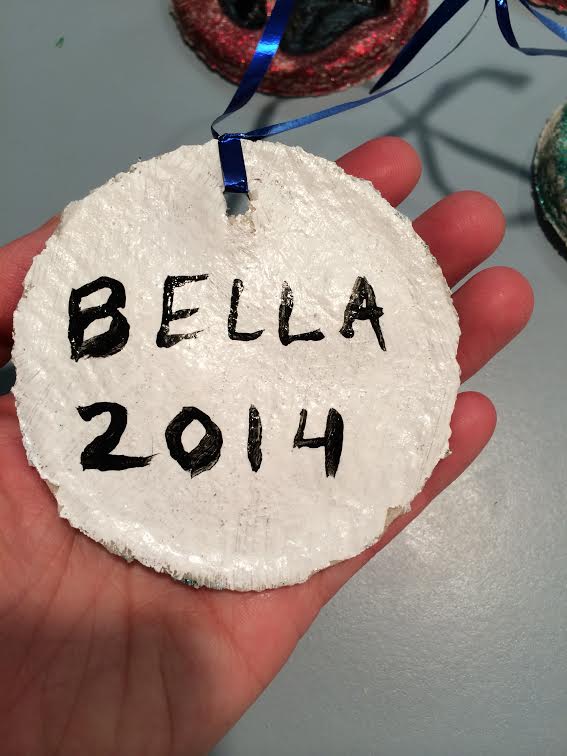 Bella! It’s our second Christmas having the munchkin. 🙂 Bella was super excited about her ornament. Haha! 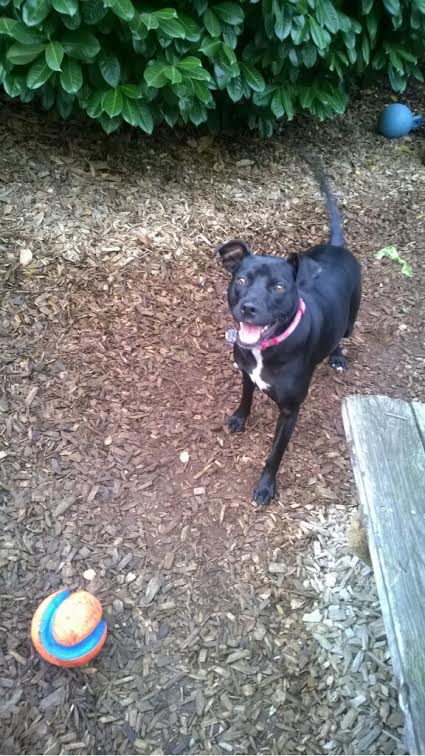 Anyways, if you have kids this would be a great art project for them. It was really easy and fun and you can do so many different types of ornaments with this recipe. I’m happy with how they turned out. Now if only I could somehow get the cats to cooperate for something like this……!

It started with a workout at the Warrior Room, Kettlebell Conditioning. Most of the class was newbies so the instructor, Ashley, spent most of the class doing basic instruction. The few of us that are old hats were kind of set free to do the workout on our own. I loved that so many people were new! That’s awesome. If you live in Portland and were considering checking out the kettle bell gym, I highly recommend it! I started going almost a year ago simply because I had a Groupon deal for it and wanted to get some instruction on my kettle bell form. Who knew that I’d end up loving the classes so much I’d keep going! 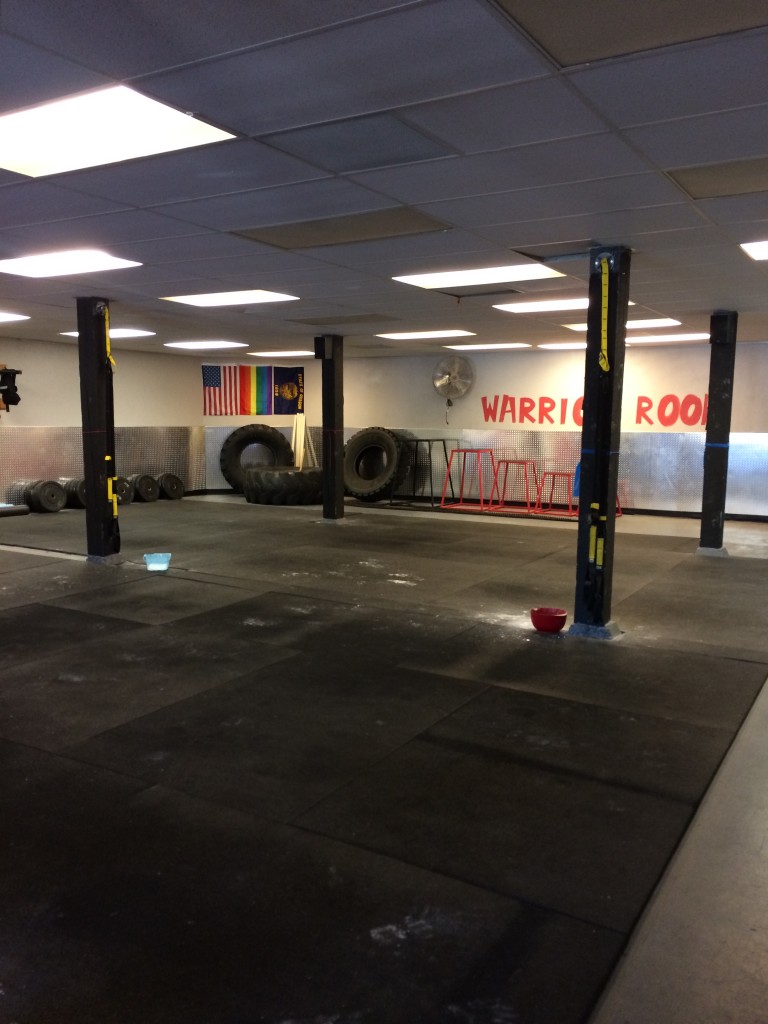 The one thing I hated? The partner workout at the end. One person had to hold a plank position with one hand behind their back while the other person did 20 burpees, then we switched. It was brutal and I seriously thought I might black out! Here was the calorie burn: 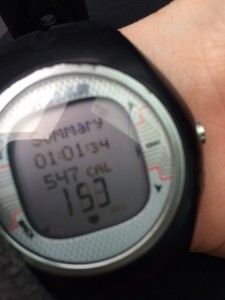 Then I spent several hours picking tomatoes and jalapenos and making salsa. That first batch I made about a month ago is almost gone! There is one jar left and Michael loves it. We had so many jalapenos it was beginning to be overwhelming so I made salsa–a double batch this time. This should last us for the winter. In a few weeks when the rest of the tomatoes have ripened I will make spaghetti sauce with them and can those. 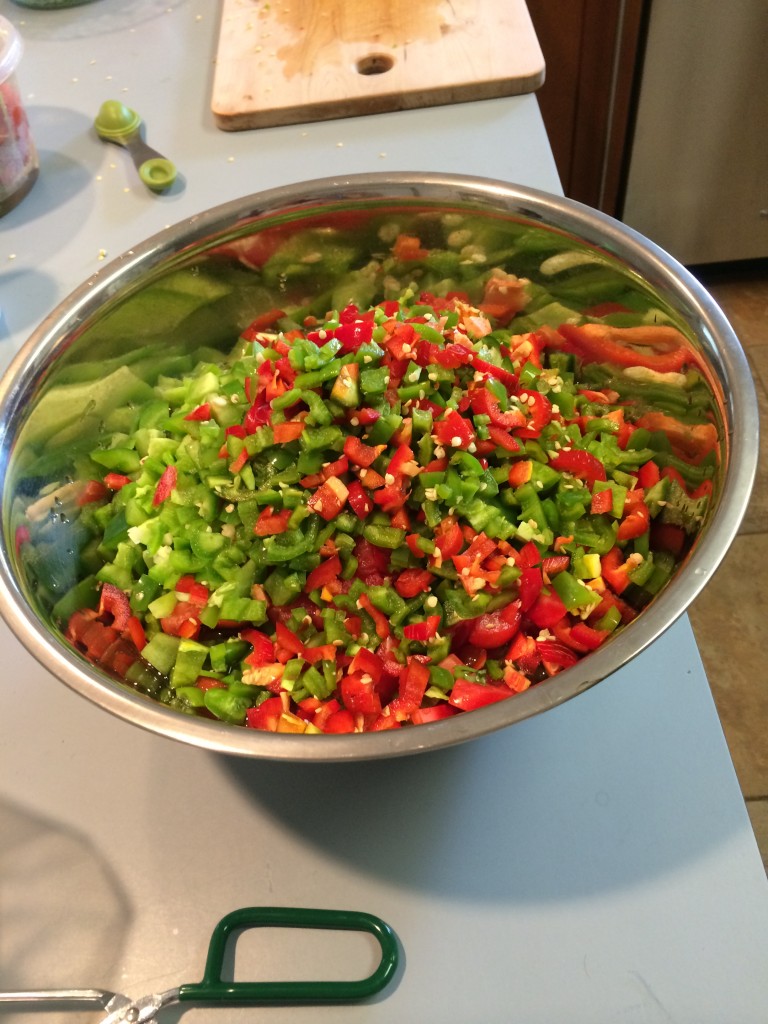 Talk about labor! It was hard work. This time Michael helped me with some of the prep, which was much appreciated. It made 9 jars. I didn’t seal one of them and put it in the fridge to eat soon but the rest of them sealed properly. I was happy about that. And there is definitely something satisfying about pulling vegetables from the garden and canning them! 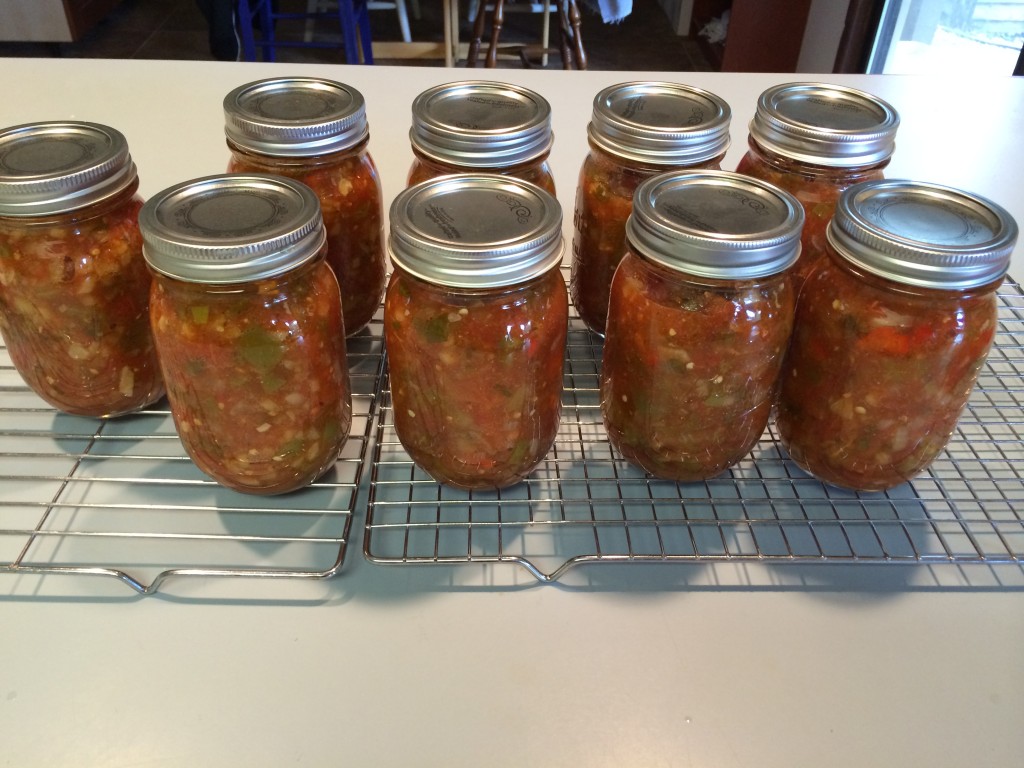 I bought a canning kit that came with a proper funnel, tongs and other utensils you need for canning and they worked great! It was a really gloomy, dark day and it rained pretty heavily for most of it, so spending the day inside was ideal. Later that afternoon, as if I had’t done enough already…I did some crafts for the wedding: 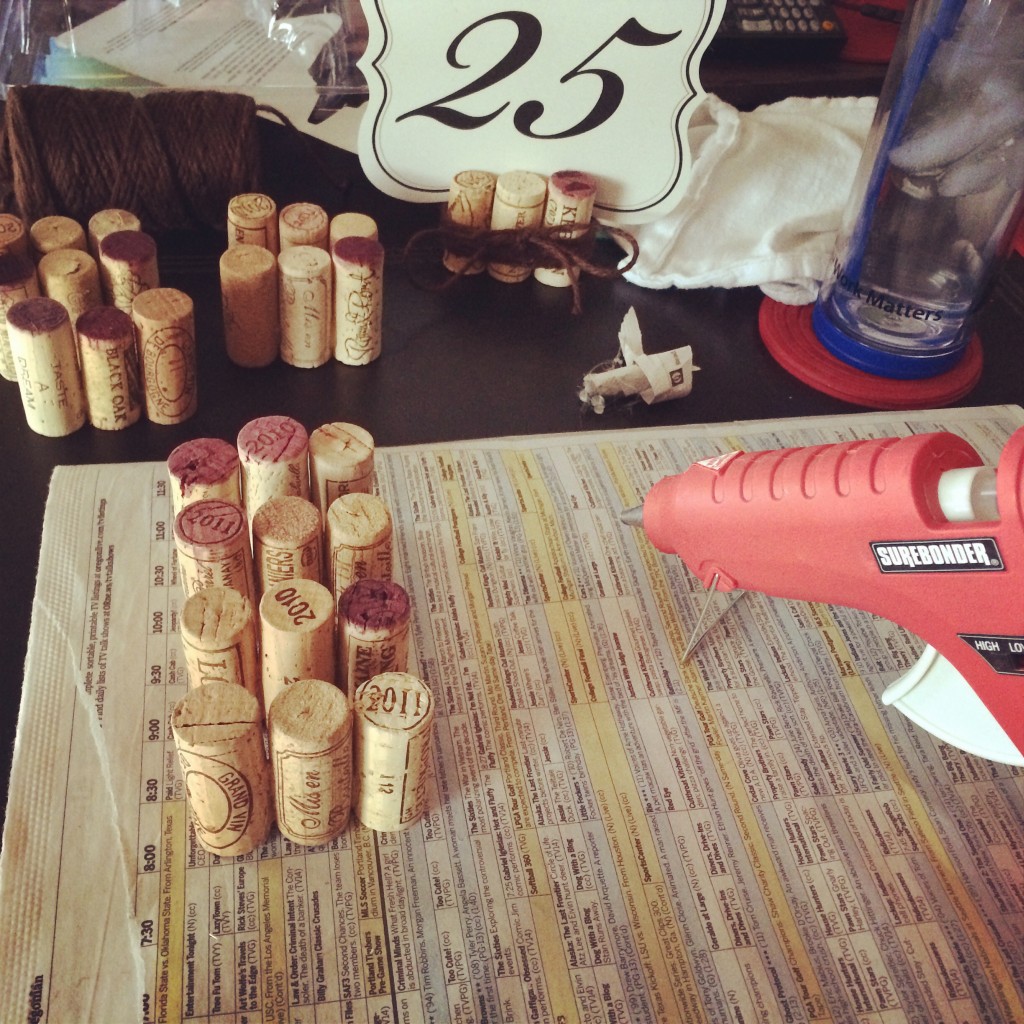 Saturday was a busy one! It was easy doing the crafts, though, because I worked on it while we watched “Bad Words.” (Super cute movie.)

My Sunday started with yoga and then:

For some reason in August I started thinking about the sweat lodge I did years ago. I wrote about many years ago in the beginning of this blog, you can read it here: My First Wake Up Call – The Sweatlodge. Anyways, so lately I just started thinking about it and for some reason I couldn’t shake the thought. It kept coming back to me — this urge. I looked around online to try and find a local sweat because I didn’t want to drive to Breitenbush again and I asked my friend Star if she’d go, too.

Star, who is half Navajo, had talked to the stonekeeper of the sweat and she approved so we made plans to go Sunday. First I went over to her place to make prayer ties. We breathed our silent prayers on a pinch of tobacco and then rolled it up into the red cloth and tied them to the tie. 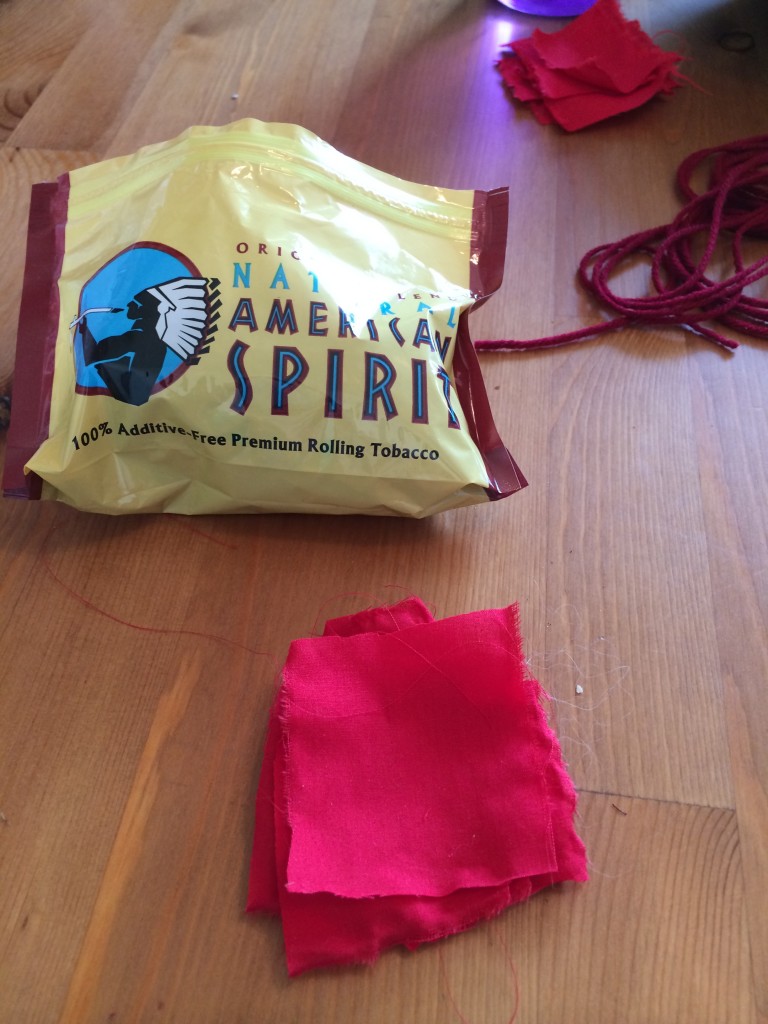 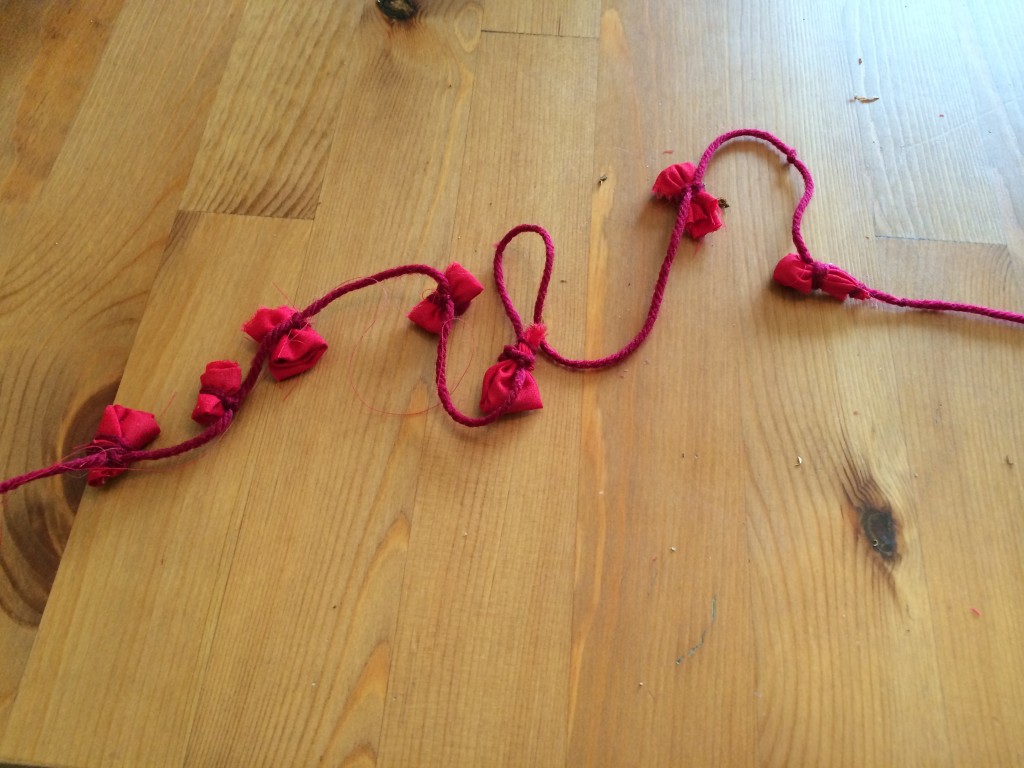 It was a nice, calming ritual and when we were done we drove out to Sherwood (i.e. the middle of nowhere) for the sweat. We got there and saw the skeleton of the sweat dome. That’s when we found out that it was on Saturday at 4 not Sunday at 2 like their website had stated. Needless to say, I was extremely frustrated and disappointed and Sunday was pretty much a wash. Not only that, there aren’t any other sweats that I could go to before the wedding. 🙁 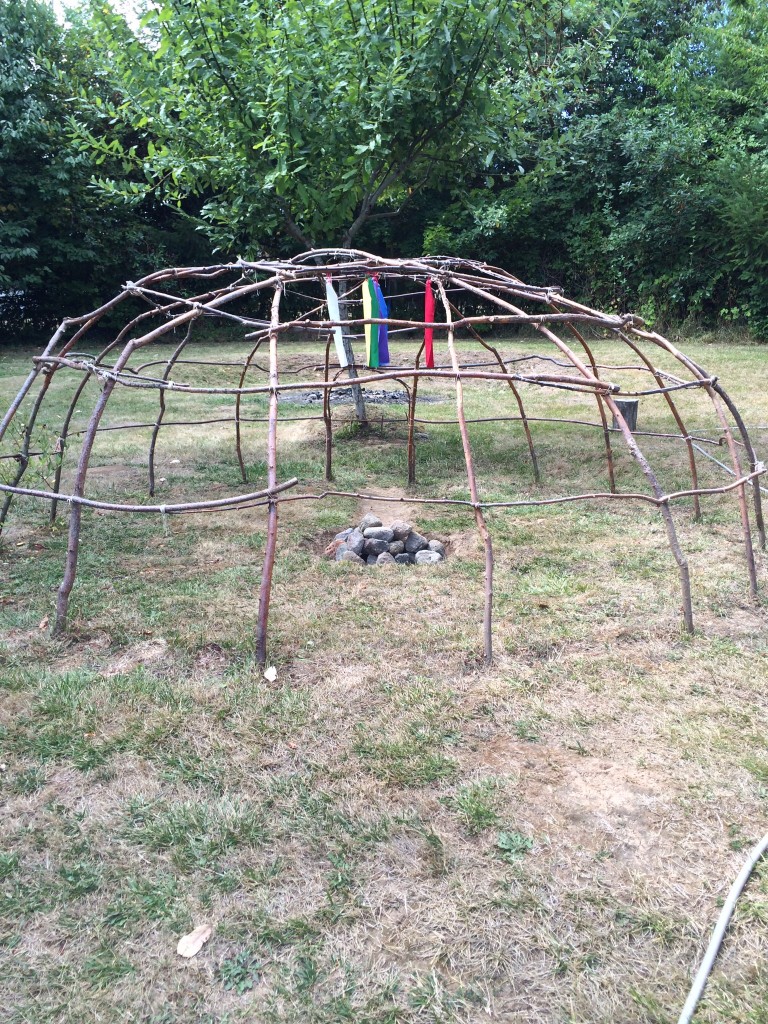 This was really important to me and the disappointment was crushing. It also made me really irritated that they clearly didn’t know what they were doing or what was on their website…and why didn’t the stonekeeper inform Star of the change of date and time when they chatted? So flakey. I was pretty mopey the rest of Sunday and that sucked.

I actually made it to another kettlebell class, different instructor and not my usual class but I made it! It was an easier class than it normally was. I probably should have gone up in weights–if it was that easy–but I didn’t. I didn’t want to be really sore this week. 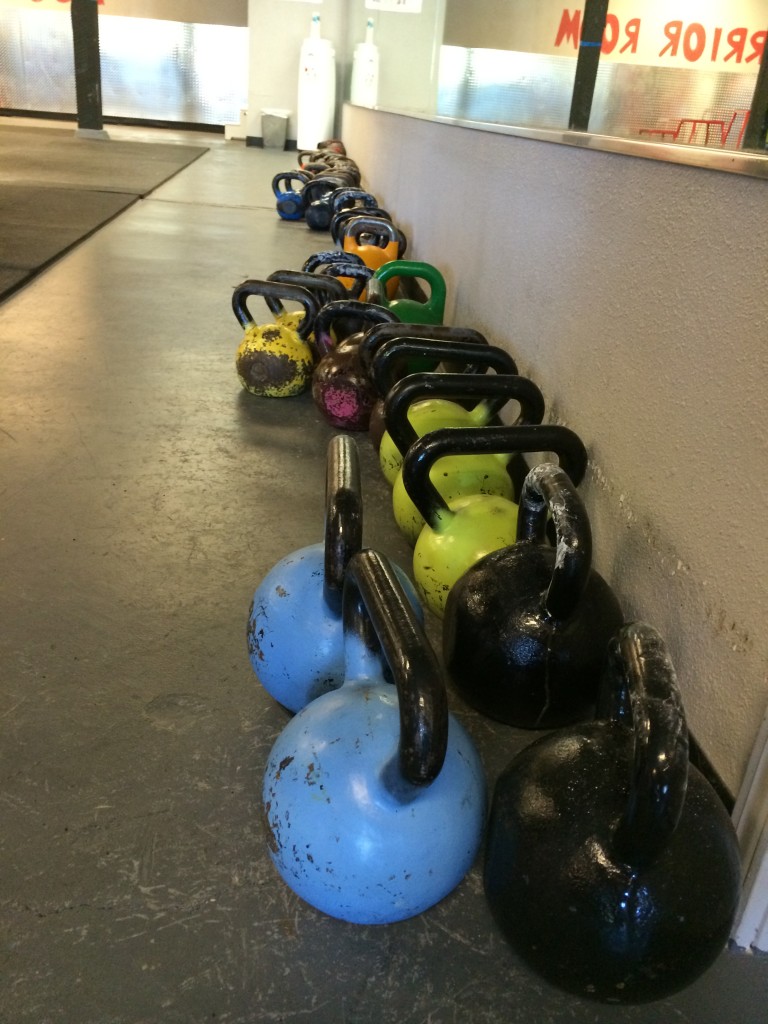 Workout done, we could get on with the last day of the long weekend! 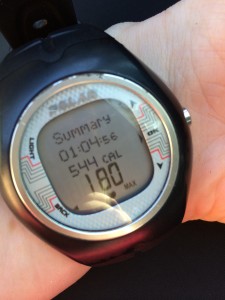 We grabbed sandwiches for lunch and headed back out to Kelley Pointe Park. It seemed like a fitting place to spend a sunny day and celebrating the end of summer. It wasn’t as crowded as I thought it would be. We had a picnic lunch and then threw the ball for Bella in the grassy field area. 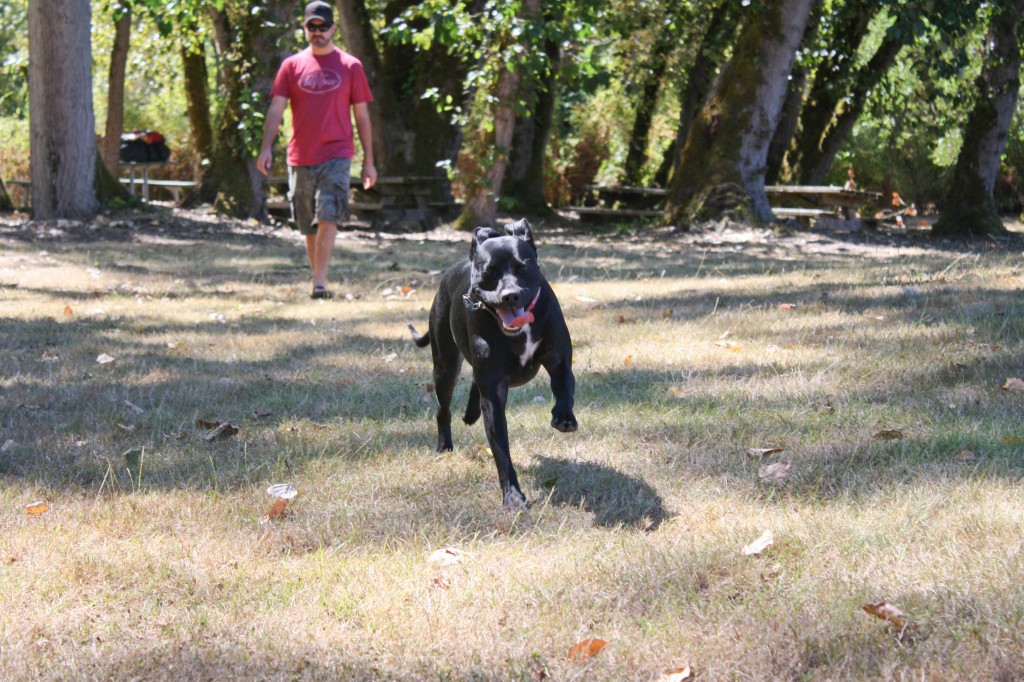 After that we walked down to the sandy beach and set up a blanket. Bella was ready to play! She remembered the place and ran straight to the water and jumped in. She also made some dog friends and they splashed each other and played together. It was so cute to watch. 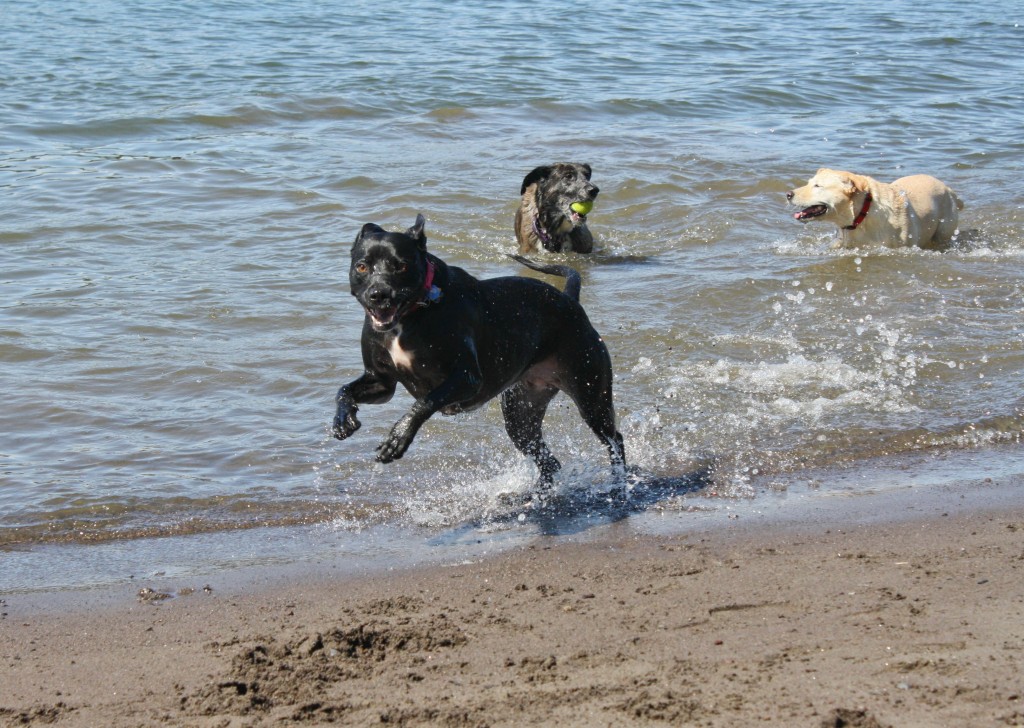 She’s really funny because she hasn’t mastered the doggy paddle yet. She just kind of hops and jumps OVER the water instead of trying to swim. It’s hilarious to watch. I was hoping that her playing with the other two dogs she’d catch on and learn how to swim but not so much…Whatever, she was having fun and that’s all that matters. 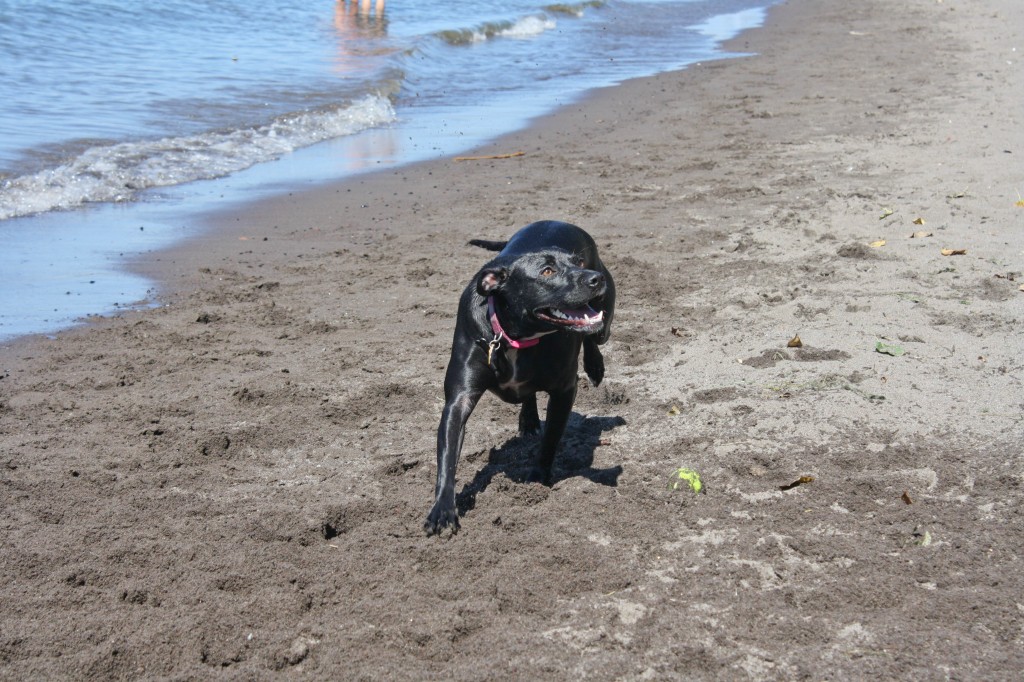 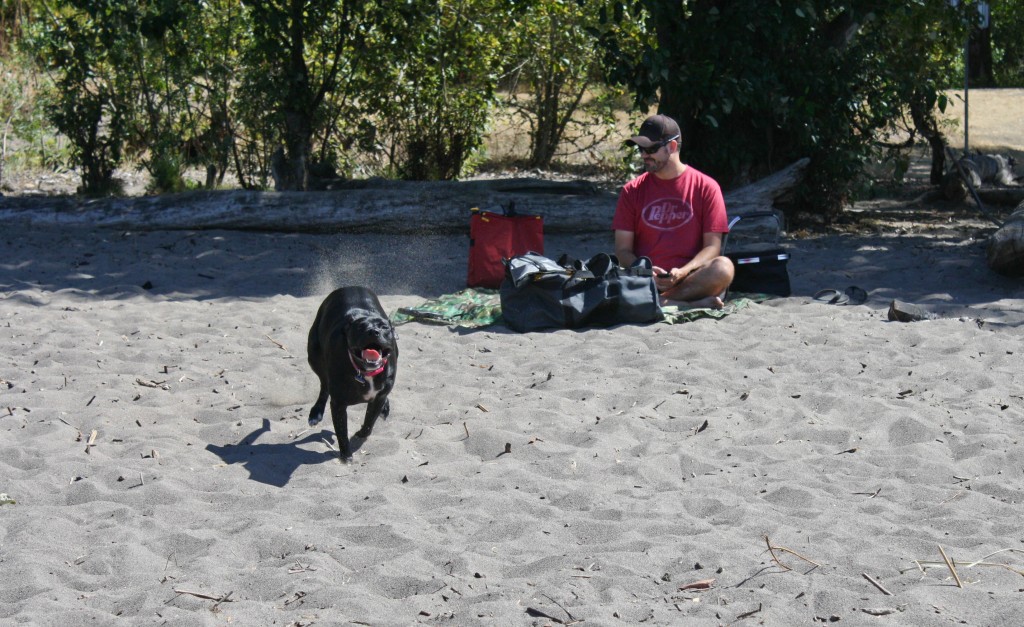 And what day at the beach would be complete if she didn’t roll around in the sand and get absolutely filthy? Yep, someone got a bath when we got home!