We were supposed to go camping at the beginning of summer. I don’t know how it is in your neck of the woods, but here in the NW you book your campgrounds/yurts/cabins 9 months in advance. That’s the window. It’s always a crap shoot. Like, will the weather be good “this weekend” in 9 months? Who knows! Last summer we had a bunch of camping weekends booked and then we sold our house, bought a new house and were moving. I remember we were camping in Eastern Oregon this time last year when we got the phone call from our realtor that our old house had closed!

How could we predict a global pandemic would cancel our camping plans for this year?!

Anyways. I was bummed. I had booked a super awesome cabin at Fort Stevens near Astoria, OR. I went there a bunch of times with my family when I was a kid. I remember it being very fun and cool and my brother and I would just take off riding our bikes on the trails. And there’s a shipwreck on the beach. It’s a cool place. I was so excited to take Logan! Needless to say, huge disappointment when it closed at the beginning of this pandemic.

As campgrounds started opening up in July on a limited basis, and reservations were now 2 weeks in advance only, I thought maybe we could do something. But it wasn’t in the cards. Michael got a new job (which is good) but there was no vacation time. Then Stevie got sick and until this weekend he’s been on a lot medications and I didn’t want to leave him.

Well, we decided to camp in our backyard!

We kept it a secret and then when Logan got up from his nap Saturday afternoon the boys started putting up the tent!

Logan was OVER THE MOON! He was so excited. And you know what? It was good to be outside. He had a lot of screen time when this pandemic started and it was nice to just get outside for many many hours.

He played outside with his toys. We listened to music and had hot dogs for dinner! Plus the most amazing hummus I’ve ever had that we bought that morning at the local farmer’s market.

Logan was so excited about camping he said “let’s go to sleep now!” When it was still light out. LOL We explained we had to wait until dark and that meant he got to stay up past his bedtime.

One thing missing from our campout was a fire pit and s’mores. I’ve wanted a fire pit in our yard for 10+ years. We still haven’t gotten one, hopefully soon! Instead we had yummy popsicles (Logan’s first). And we did some music:

It was finally getting dark. Logan was so excited he went inside and put his PJs on all by himself. He was ready!

We tried to get Bella to go in tent with us (she’s camped with us before) but she didn’t want to do it this time. So she went back in the house with the cats. 😉

Camping was a blast. Logan said he wants to do it every day now. hahaha. I’m thinking we’ll do it again before summer is over. Maybe Labor Day weekend! And hopefully we’ll have our fire pit by then.

First, I wanted to share something for local Portland parents. At my baby shower my aunt got me this awesome gift! A hand/foot print done by her friend who runs a little business called Hands On Keepsake Company. I took Logan on our last day of my maternity leave when he was 10 weeks old and got his foot and hand print done. 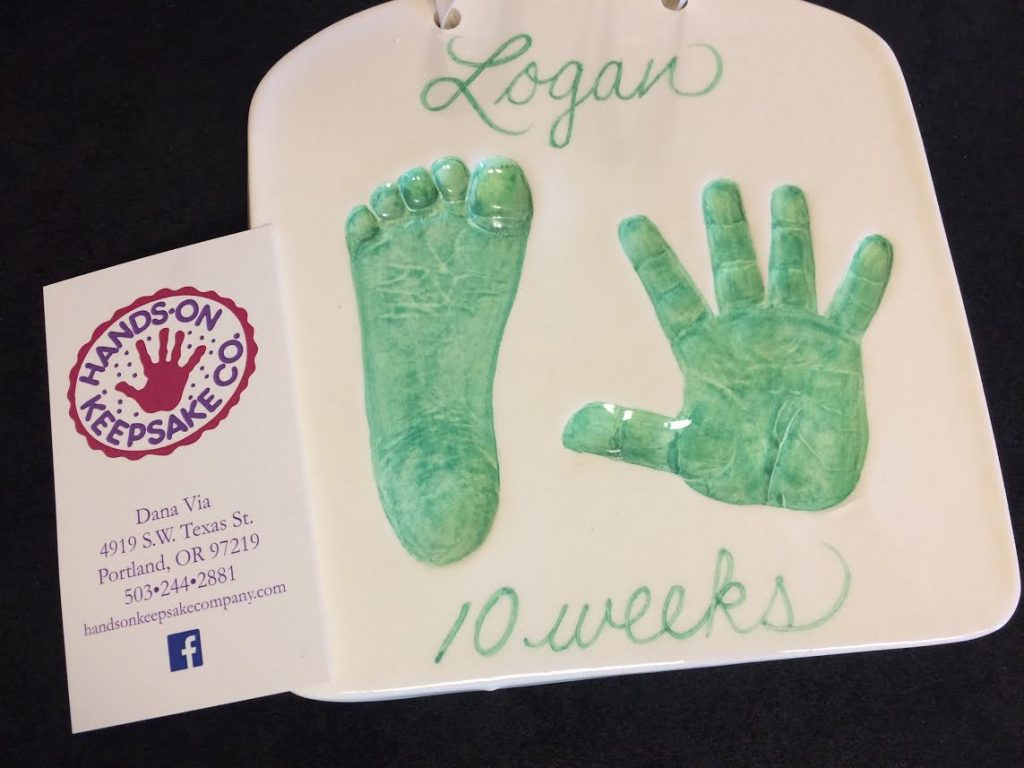 I recently picked it up and I am so happy with it! It’s hanging in his nursery and it’s just so cute and it turned out really great. I’m thinking I will do it again for his 1st birthday just to have something to compare. 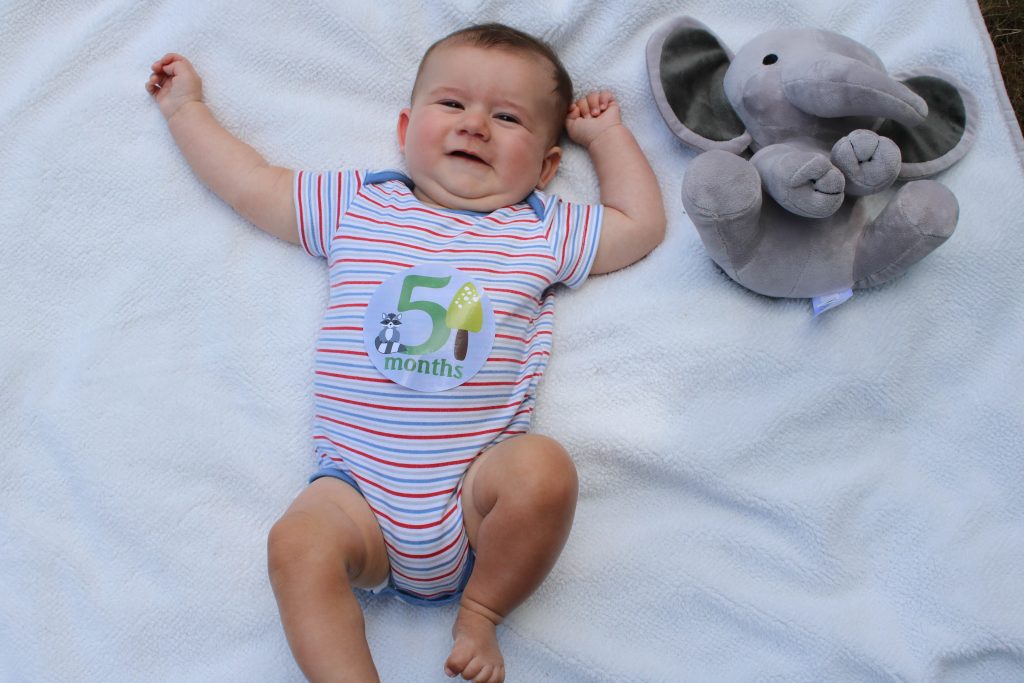 In the last few weeks he’s decided he wants to be ON THE MOVE at all times. He rarely stays in the same spot we put him now. I put him down on his back and he immediately rolls and flips onto his belly like a little gymnast. He’s not crawling–yet–but he’s trying really hard to do it! He gets his legs pumping and he kind of scoots and rolls and pulls. It’s so funny to watch. This photo shows just how much he is moving (he was put down on his back in the middle of his gym mat): 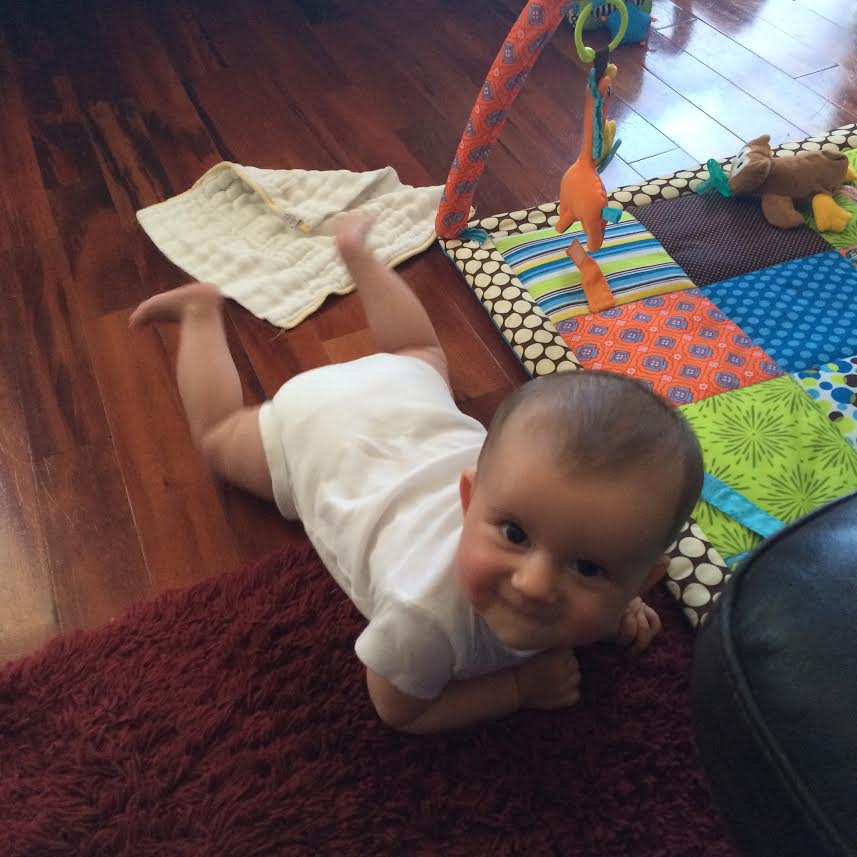 My mom saw this photo and said he looks just like me when I was that age. I guess we have the same exact expression on our face. 🙂 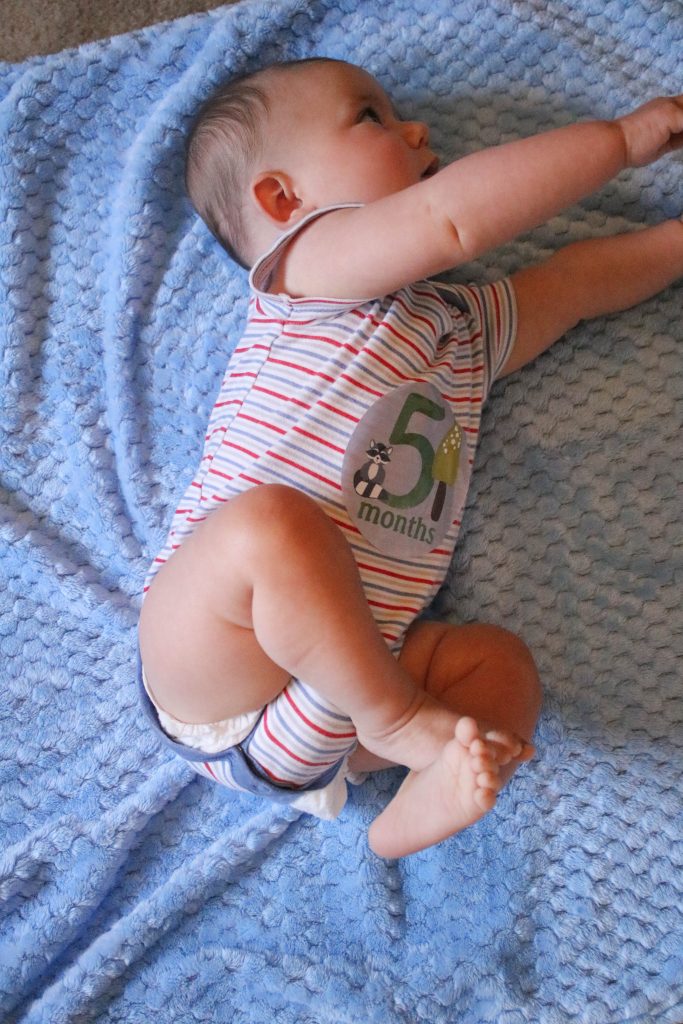 The 4 month sleep regression hit us pretty hard. We were spoiled with him sleeping through the night for almost 2 months. He must be growing at a crazy pace because he’s waking up a few times a night now to eat. (Mama is exhausted!)

This week he also decided that he wants to roll over onto his belly in the pack n’ play when he should be sleeping (which makes me really nervous–even though the doctor said it’s ok he sleeps on his tummy once he can roll over like this–it still freaks me out and I move him back to his back). 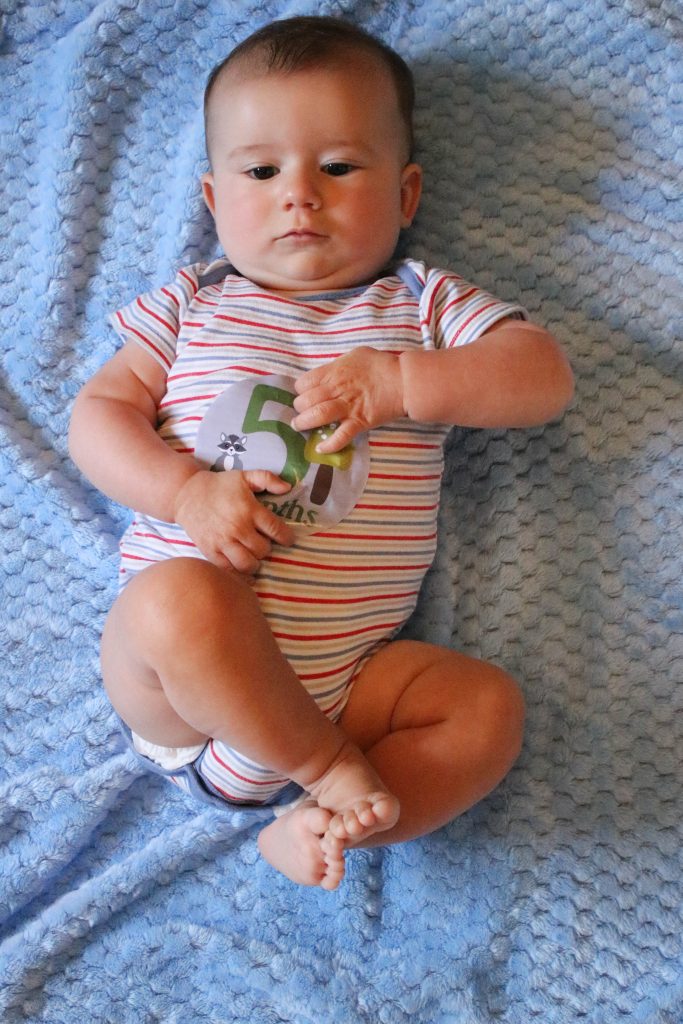 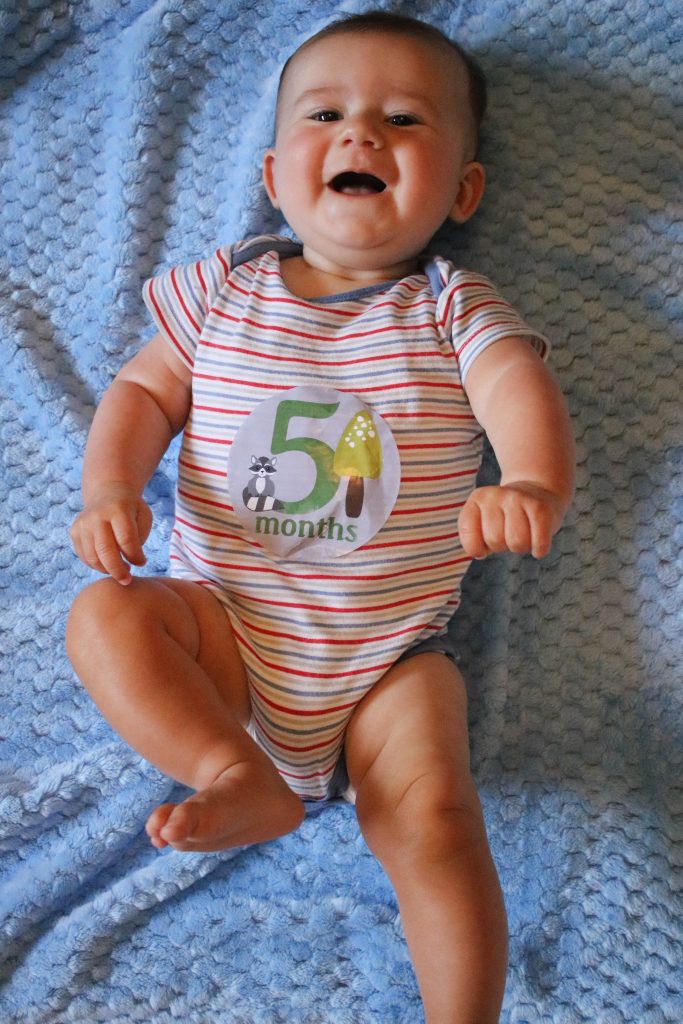 My little gymnast is discovering new things! He does downward dog. He does cobra. He uses the rings on his toys in his little gym to pull himself up as he flips over. And this week he got a whole lot better at his motor skills. He discovered that his little monkey attached to the carseat vibrates if you pull it. He was having a grand old time pulling it and it was so cool to see how focused he was on the task. 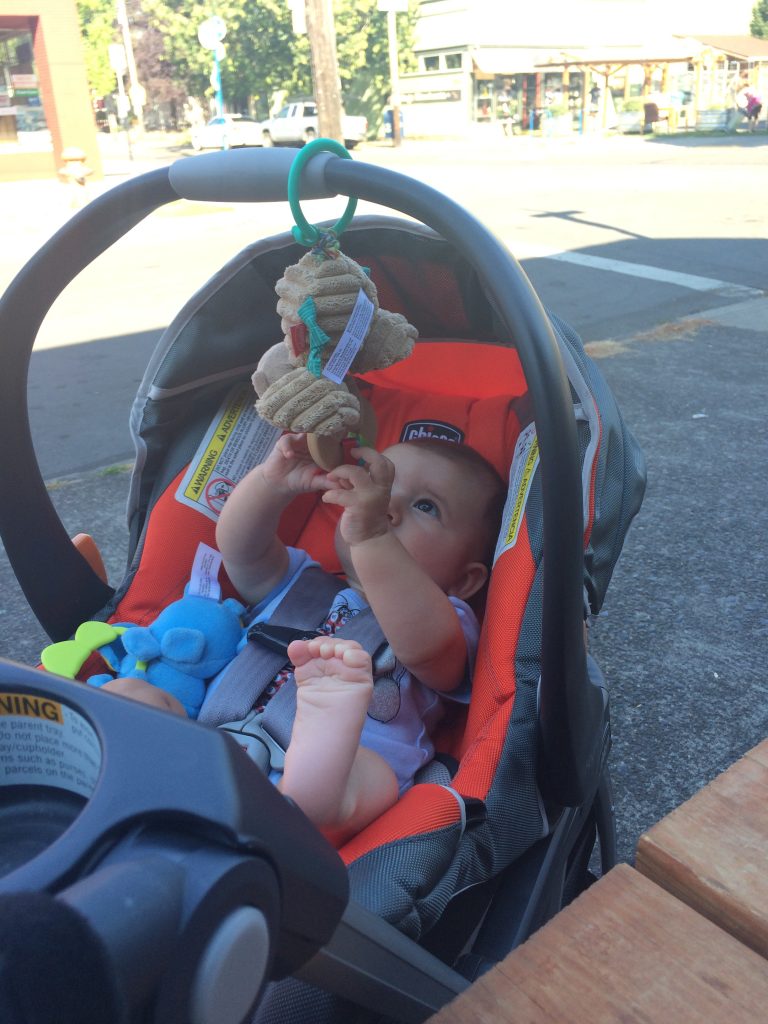 In other news, he starts daycare part time in September. I have to admit, I’m having a really, really hard time with it. It’s going to be so emotional and stressful for me dropping him off to be with someone else. We’ve been so lucky to have been able to work out a schedule with our jobs so that either me or Michael is home with him every day during the week. I know it’s made a huge difference for all of us and we both got a chance to bond with Logan. Seeing Michael be such an amazing dad and take care of Logan when I go into the office has been really awesome to see. And going into the office a few times a week gives me a break (sometimes much needed break!). But I’d be lying if I said this was going to be an easy transition.

I know daycare will be a good thing — at some point. It will socialize Logan and get him exposed to other babies/kids and germs and get him ready for school eventually…but when they are teeny babies it just doesn’t make sense to me. 🙁 But it has to be done. I’m grateful that I have a situation where it will only be part time daycare for the rest of this year. That’s something, and it’s given me a little relief knowing that I’ll be home with him two days a week at least. 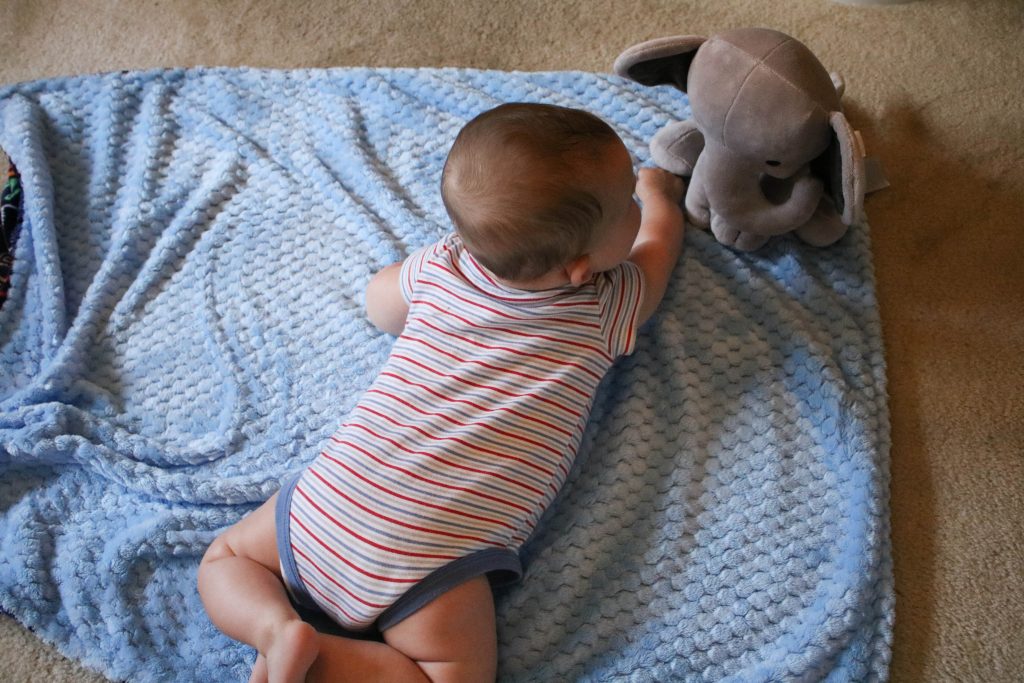 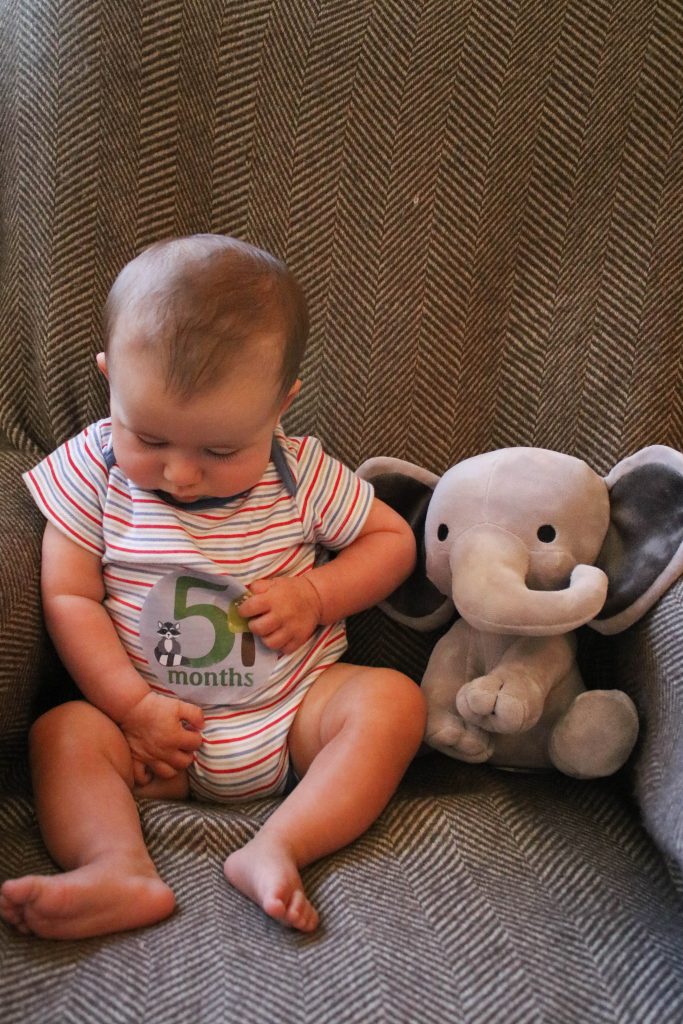 I know it’s going to be hard for me. I’m trying not to think about it too much at the moment. I just don’t want to miss out on all of his firsts because he’s in daycare.

Finally, on a happy note, I put him in the middle of his blanket, walked away for a few minutes, and when I came back I saw this: 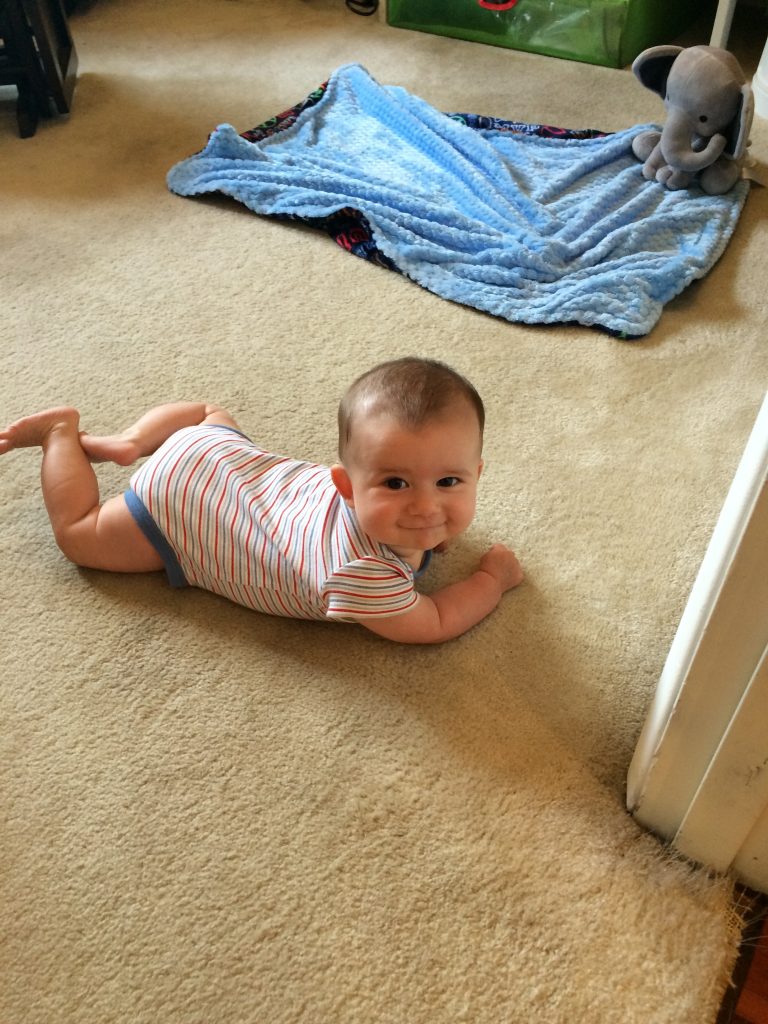 I would be surprised if he wasn’t crawling soon!