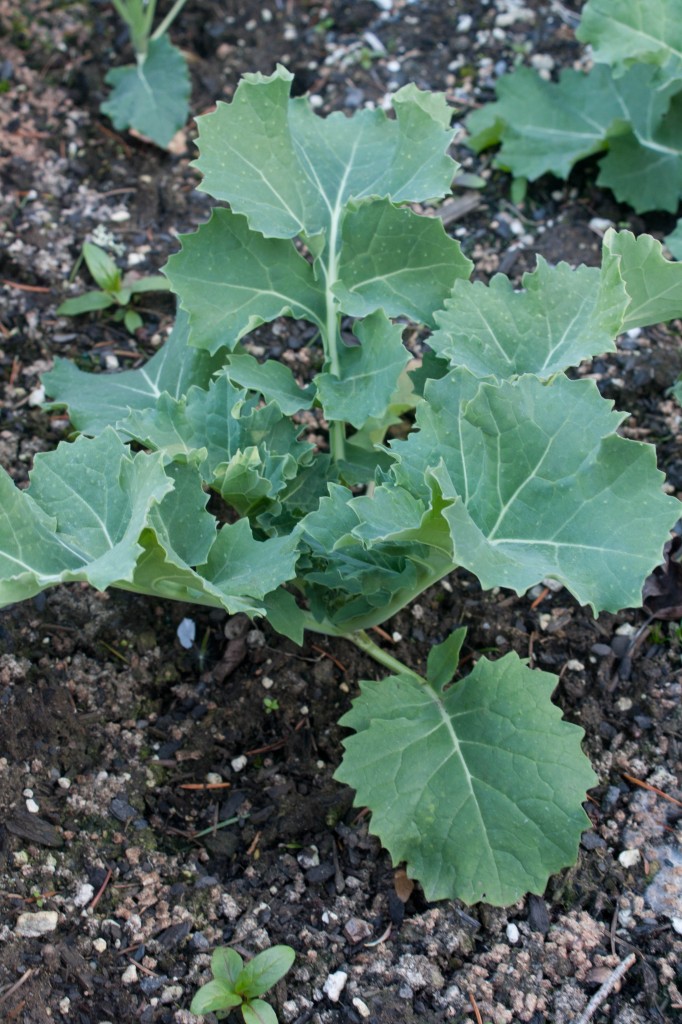 This post is about various kale recipes and preparations I’ve tried. Why? Because I have a crap-ton of kale in my garden maturing all at the same time! Not that I’m complaining. I was super bummed when my kale was destroyed by aphids last year.

Kale is so good for you, too. It’s low in calories, high in Vitamin K, C and A. It’s an antioxidant and it has calcium. It’s also tasty and incredibly versatile.

One morning for breakfast I sauteed some kale in coconut oil and seasoned with a little salt, pepper and paprika. I topped the bed of kale with two fried eggs and called it good. I was surprised at how tasty it was! It might make a regular appearance in my breakfast rotation.

There’s of course Kale with Bacon (everything is better with bacon, right?). Kale sauteed with onions or shallots is great and easy. But the best use of kale, so far, has been the Cheesy Kale Chips I discovered last summer. They are massively addicting and all my neighbors were begging me to make them some! It was also a good snack that you didn’t have to feel guilty about eating in massive quantities. 🙂

Thankfully the wild bunnies that frolic in our yard have not discovered our veggie garden. How is that possible? For three years our garden has been bunny-free.  And he’s been eating our weeds! YAY! 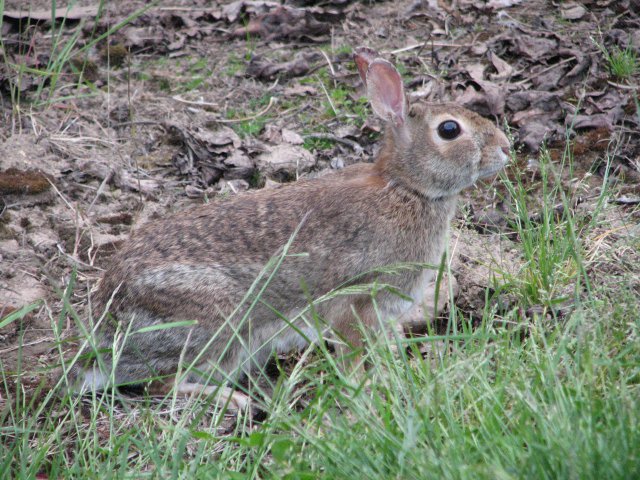 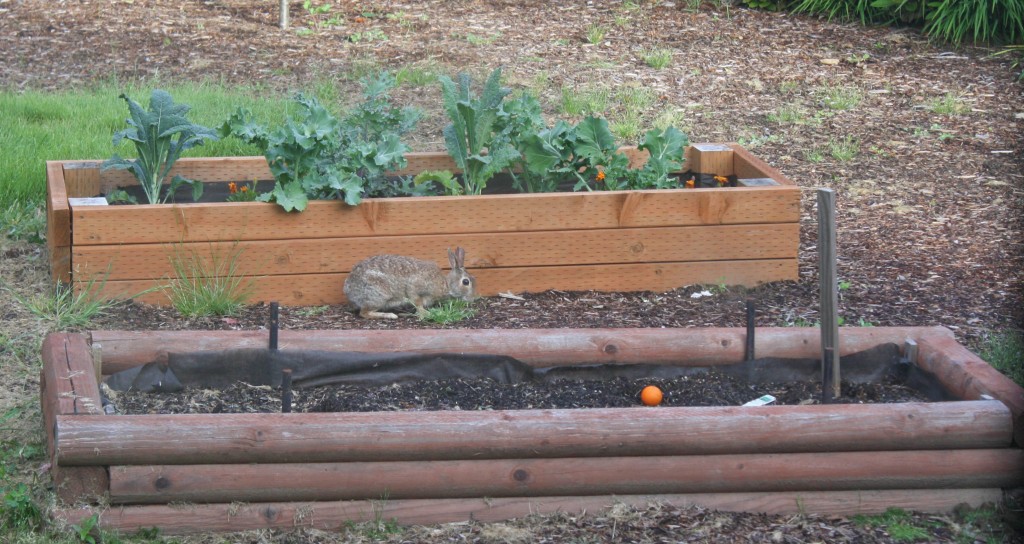 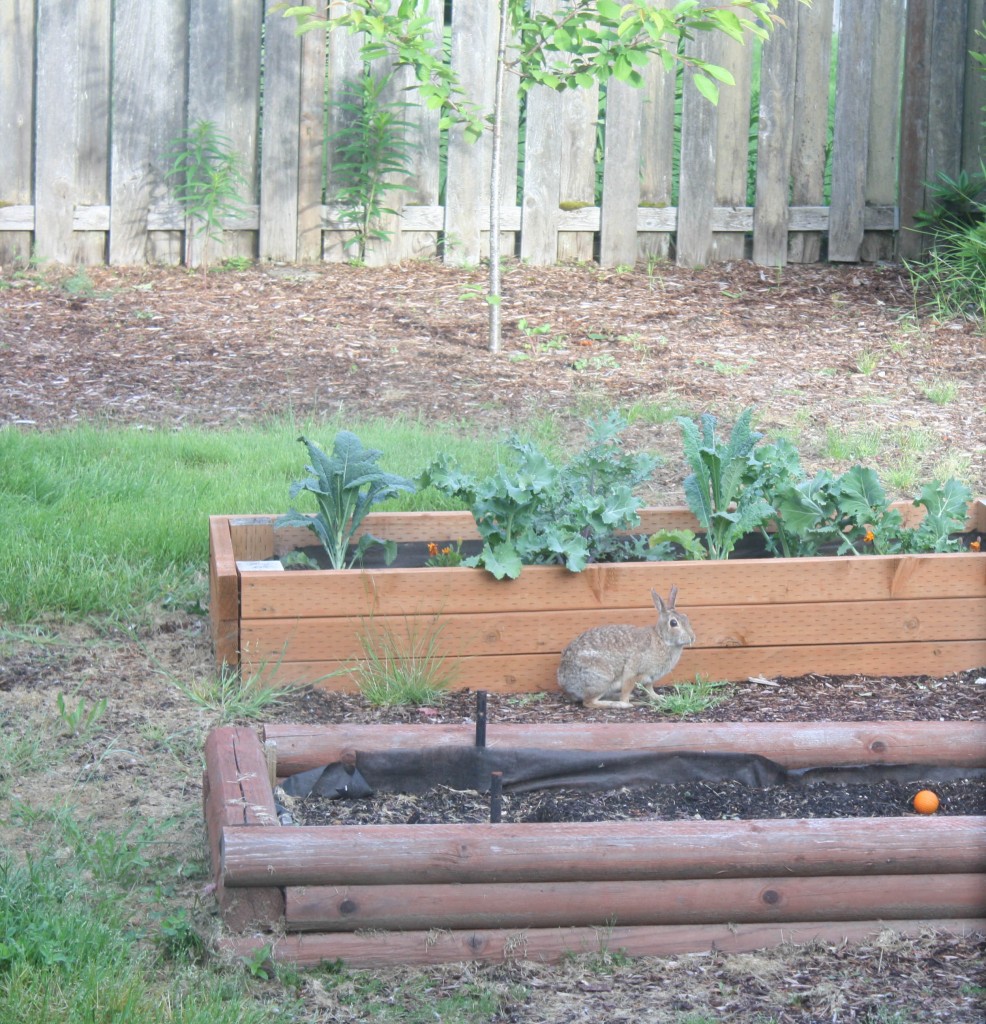 Simple ingredients: 1 garlic clove minced, 1 bunch of kale, 1/4 cup chopped pistachios, Grapeseed oil, Salt and pepper to taste. Cook down the fresh kale in a skillet with the grapeseed oil until wilted.

I had the kale with blackened salmon (one of my favorites) and some raw peppers with ranch dressing (I was craving it). It was really good! 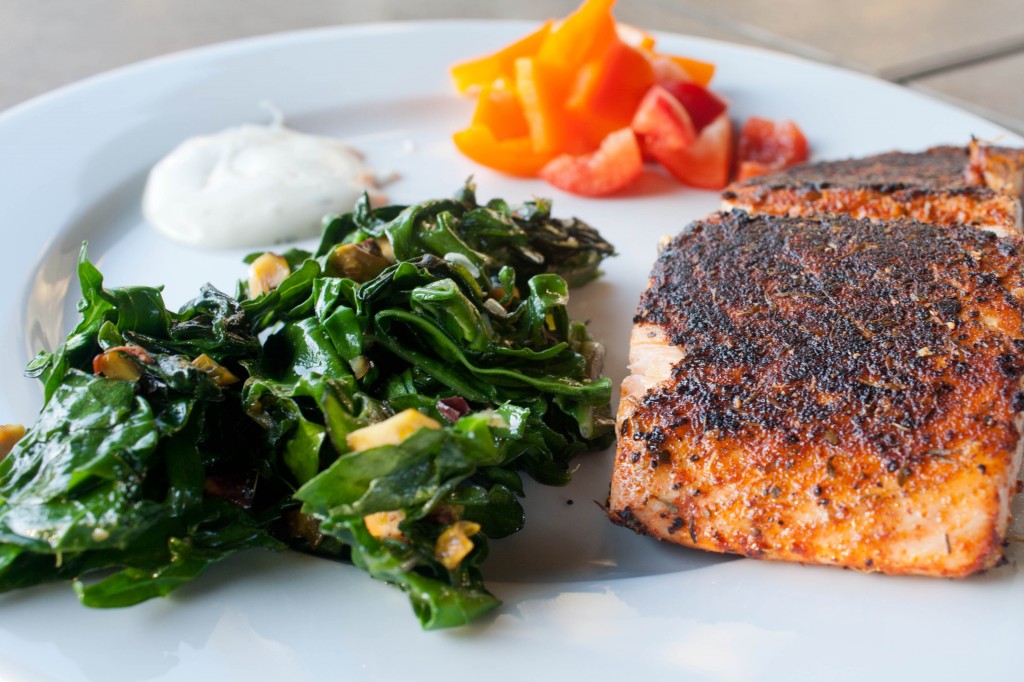 My dinner was Israeli Couscous with the kale and topped with a spicy bratwurst. Mixed all together it was a spicy, flavorful dinner. 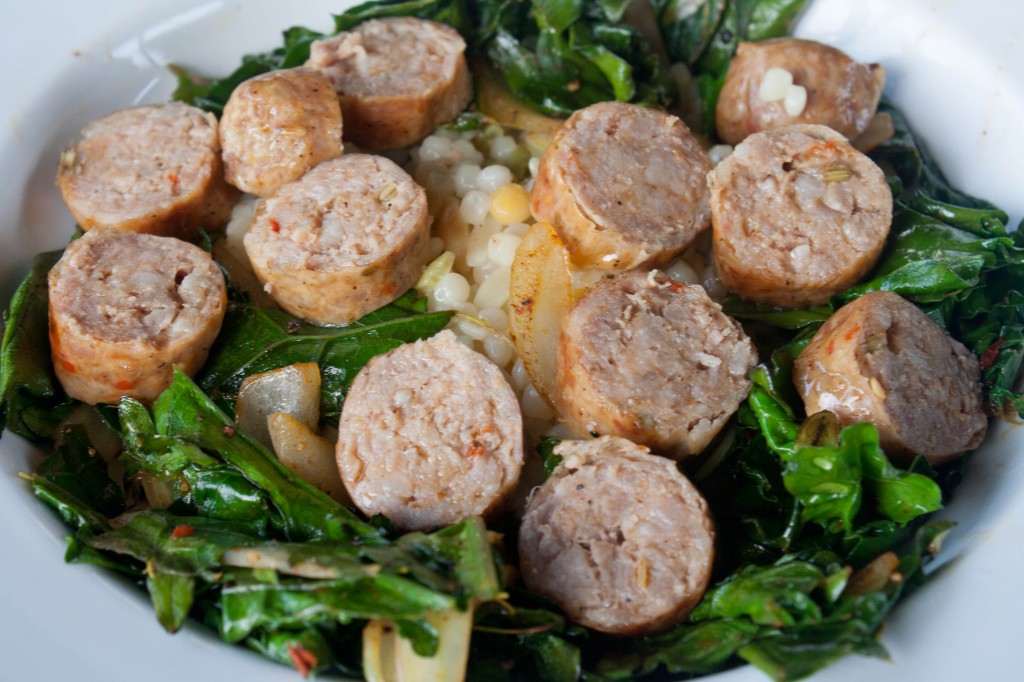 This was Michael’s creation. He got some gluten free macaroni and mixed it with a can of season tomatoes, spicy sausage, a ton of kale from our garden and mozzarella. He baked it in a big pan and the second I walked into the garage I could smell it baking in the oven. The aroma of spicy sausage, garlic and red sauce is one of my favorites. 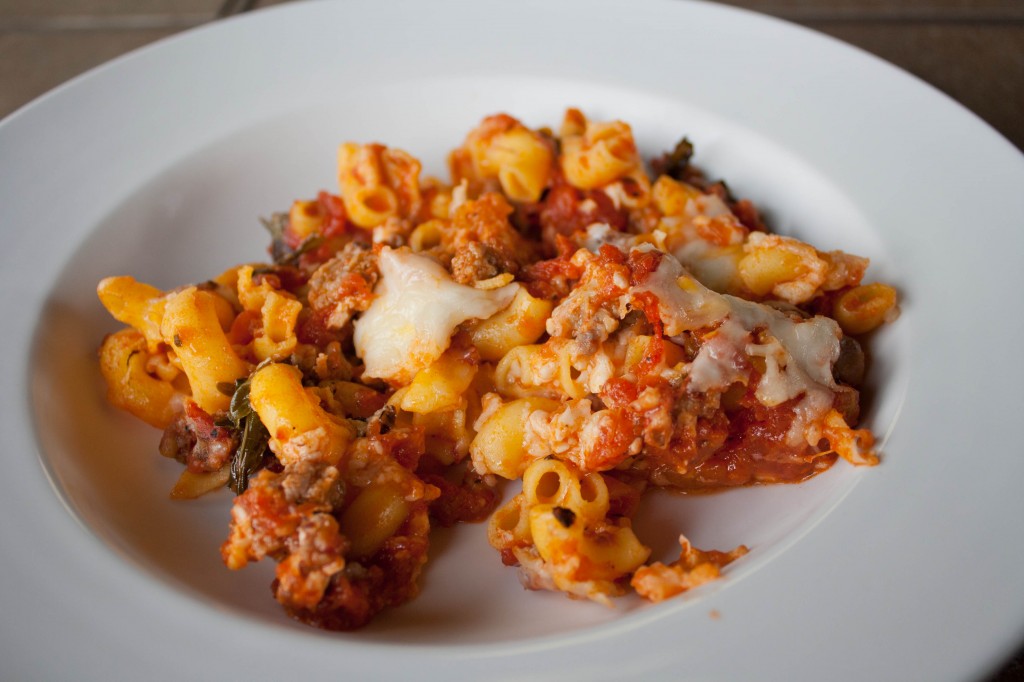 The gluten free macaroni was  little weird in texture. I’m not sure what it was made out of but it wasn’t the brown rice noodles I got for the spaghetti (seen below) and those GF noodles were great.

I have so much kale in my garden I’m getting mighty creative! This time: spaghetti with kale. I bought some gluten-free spaghetti noodles from Trader Joe’s for my man since he’s trying to do the GF thing for good now. It was brown rice noodles and they actually tasted pretty good! There wasn’t a lot of flavor but the texture was exactly like regular spaghetti noodles.

I sauteed some diced onions in a pan with grapeseed oil and added the kale. I let it cook down then added the marinara sauce from a jar. I added two cloves of minced garlic and some extra herbs to it and let it just simmer while I cooked the pasta. 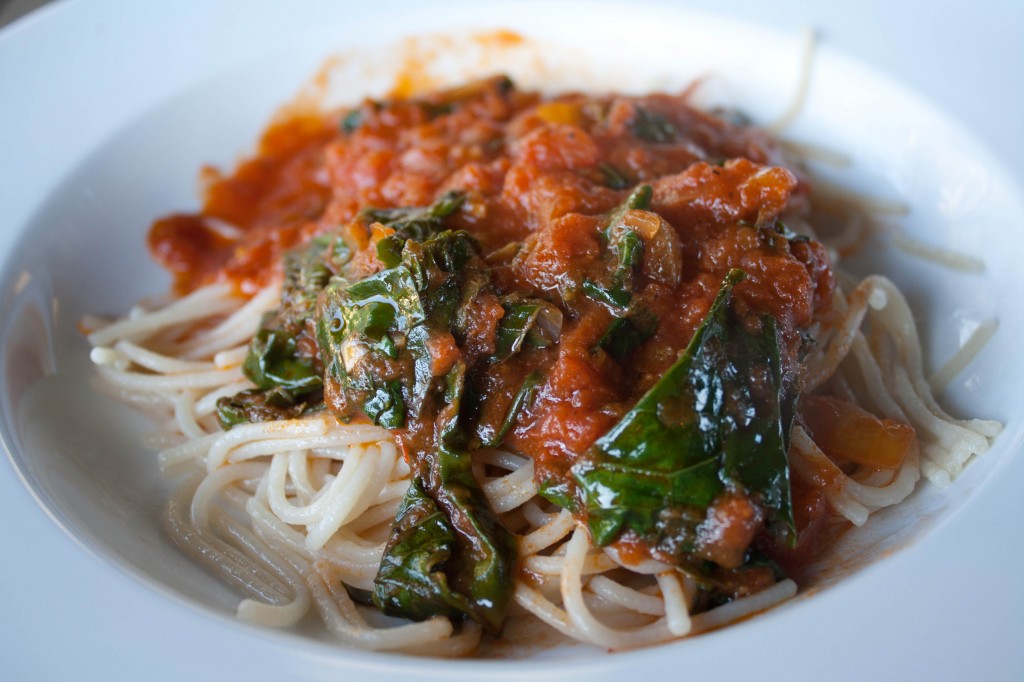 It was delicious! I loved the texture and flavor that the kale added to the dish. This is a keeper!

I’m going to try adding some kale to some post-workout smoothies soon. It’s been way too long since I’ve enjoyed my protein shakes! I think the kale would work great.

QUESTION: What is your favorite way to prepare/eat kale?

I have SO MUCH KALE in my garden! 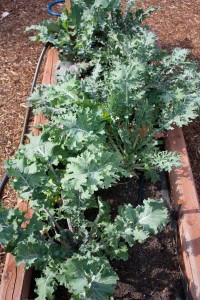 Michael’s mom suggested we try a recipe for kale chips with nutritional yeast sprinkled on top. I’d never had kale chips before and she was gushing about how delicious they were. I decided to give it a try.

It was a decent sunny day and I went out to our garden to harvest a bunch of kale to give it a try. I might have gotten distracted while I was outside when I discovered a gloriously red strawberry! I am so glad I transplanted the strawberry plant into a huge pot so it’s tripled in size. The strawberry was sweet and delicate, very different from store-bought. 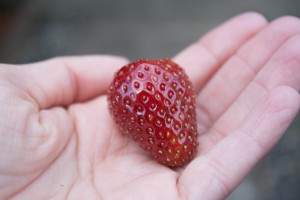 Okay, back to the kale! I cut a ton of it and then tore the leaves into pieces. I mixed the kale pieces together in a bowl by hand with olive oil. (I wondered if Grapeseed Oil would work as well, but did not try it.) 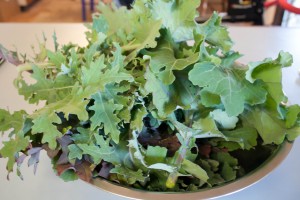 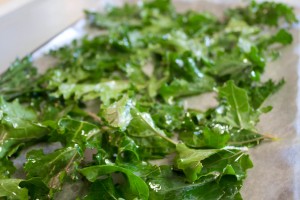 I spread the kale onto my baking sheet covered in wax paper. Then I sprinkled a thin layer of sea salt, freshly ground pepper and nutritional yeast. I went very light on the nutritional yeast because I wasn’t quite sure how it would taste. Would it be overpowering? Was less more? I took the safe route for my first batch. 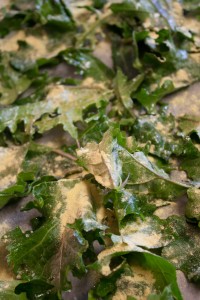 I baked it in the oven for 4 minutes, checked them and they looked great, and then turned them over and popped them back into the oven. I baked it for about 3 minutes and then tried to broil it for the last minute or so. Michael’s mom suggested it, even though the recipe did not. Ahem. It kind of failed.

The first batch ended up in the garbage in a smokey mess. I tried again, even though I was frustrated (have I mentioned how much I hate using the broiler?). The second batch was much better! Seriously, while making kale chips and using a broiler, do not leave the room and do something else! 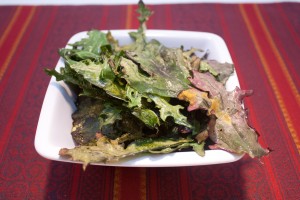 How were they? Delicious! I LOVED the nutritional yeast. It was cheesy and garlicky at the same time. The sea salt was a good addition. I erred on the side of caution and probably could have cooked the chips for a teeny bit longer. Some of them were not crispy at all (probably 20%) but the rest were as crispy as a thin tortilla chip. 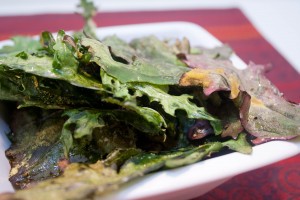 Next time I will make sure they all get crispy and I will add a lot more nutritional yeast. AND I will make a bigger batch because it’s gone in no time. Yum, yum, yum! It was a good snack before dinner. Dinner was a bratwurst with a serving of tater tots. 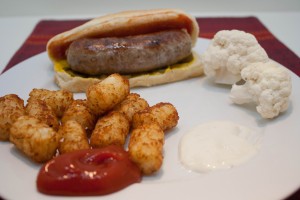 Dinner was good and quick–which was needed after my do-over on the kale chips. I through in some raw cauliflower with a little bit of blue cheese dressing as a side. What I really wanted was more kale chips. I think I’ve created a monster.

QUESTION: Have you ever made kale chips? Tips? Suggestions? Favorite recipes?