How was your weekend? Mine was pretty good. A mix of fun and low-key. On Saturday Michael and I volunteered for the Pixie Project. It’s been awhile since we’ve volunteered there because they changed the hours they needed dog walkers. 🙁 It didn’t work with our work schedules so we stopped. And then we got Bella…but I still wanted to help out when I could. The Pixie Project was having a charity dinner and auction to raise money for the shelter so we spent about three hours Saturday helping them set up at the Left Bank Annex. It was a really cool looking space! 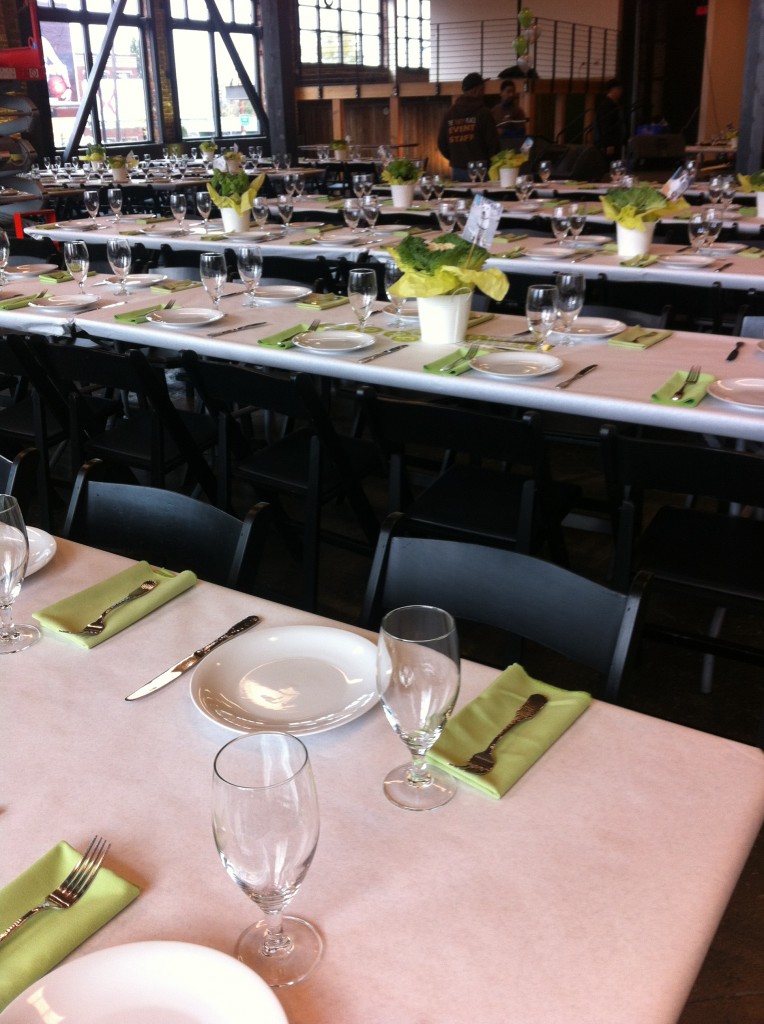 We folded like 300 napkins and then helped set up all the tables–the cutlery, the plates, etc. It was so much fun and I felt really good that I could help them. It looks gorgeous when we left and I wished we could have afforded to go to the benefit! 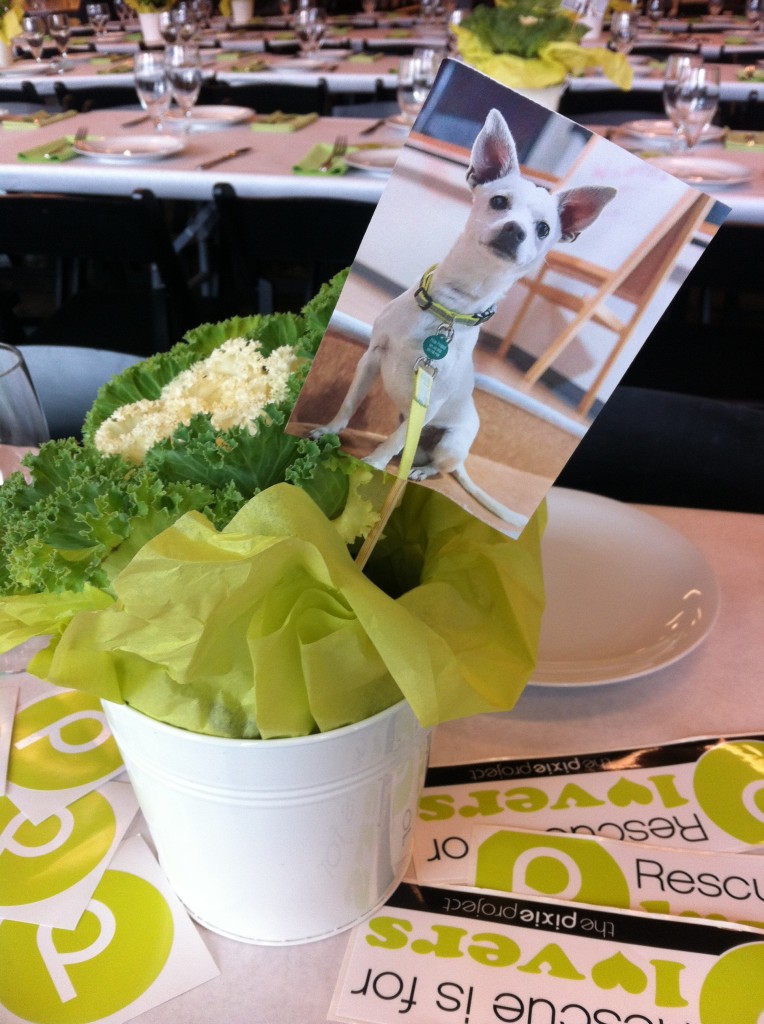 At least we were able to do our part. I hope they raised a lot of money for the puppies and kitties at The Pixie Project.

On Sunday I woke up to blue skies and dry air. The fall leaves were covering the grass and there was a slight wind rustling in the trees. It was warm and cozy inside the house and I was feeling lazy and craving comfort food. I put some Sarah McLachlan on the iPod and set to work making a childhood favorite: Navy Bean Soup. 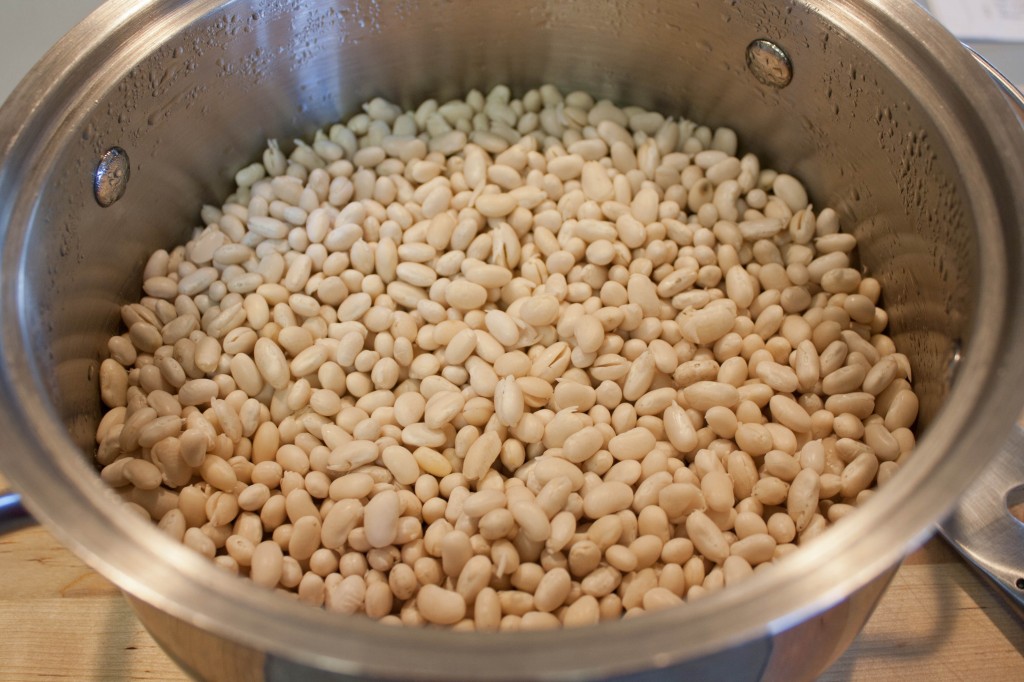 The best Navy Bean soup I’ve ever had is my aunt’s. However, she’s the type of cook that just throws things together and the end results is magic, so I didn’t have a recipe to follow. Instead, I combined two recipes I found that sounded as close to what I remember her making. Instead of posting both of those recipes, I’ll just share my adaptation.

I realized making this recipe that I need a bigger crockpot. I suppose I could have halved the recipe to make less, but that kind of defeats the purpose of a crockpot meal. I wanted enough for dinner, some lunches for the week and I’ll freeze the rest to have later when the craving for navy bean soup returns. But my crockpot was filled to the very brim. I’ve never had it that full before. I checked on it throughout the day and mixed everything around to make sure it was all cooking evenly.

I like soups with vegetables in it so I’m glad I combined the two recipes to include two vegetables I don’t eat very often: celery and carrots. I don’t know why, but it’s hard for me to eat and enjoy celery… 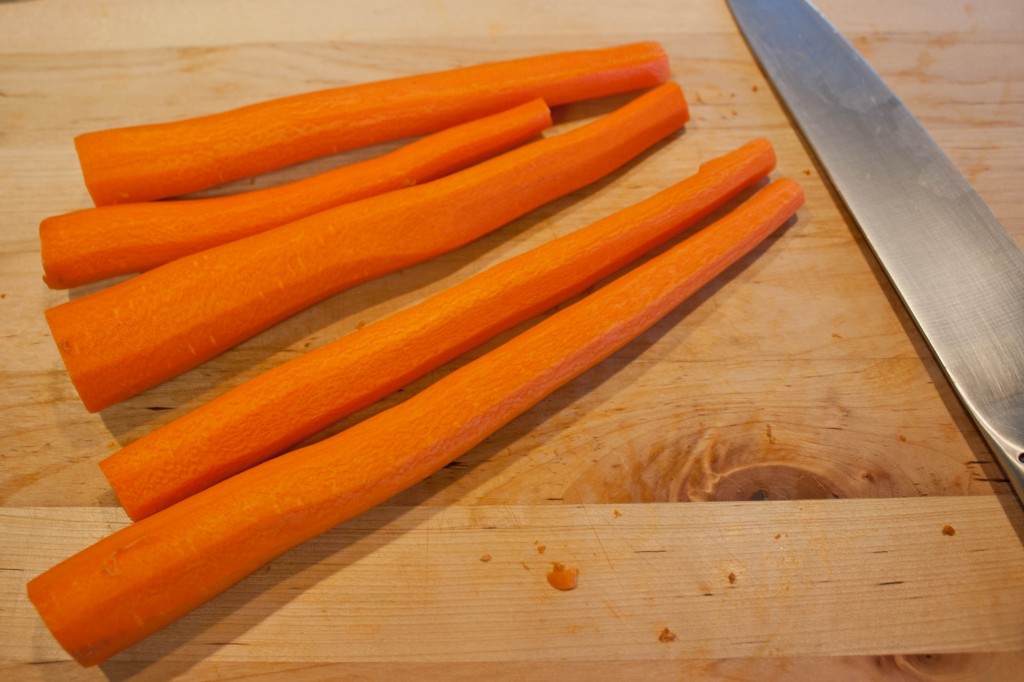 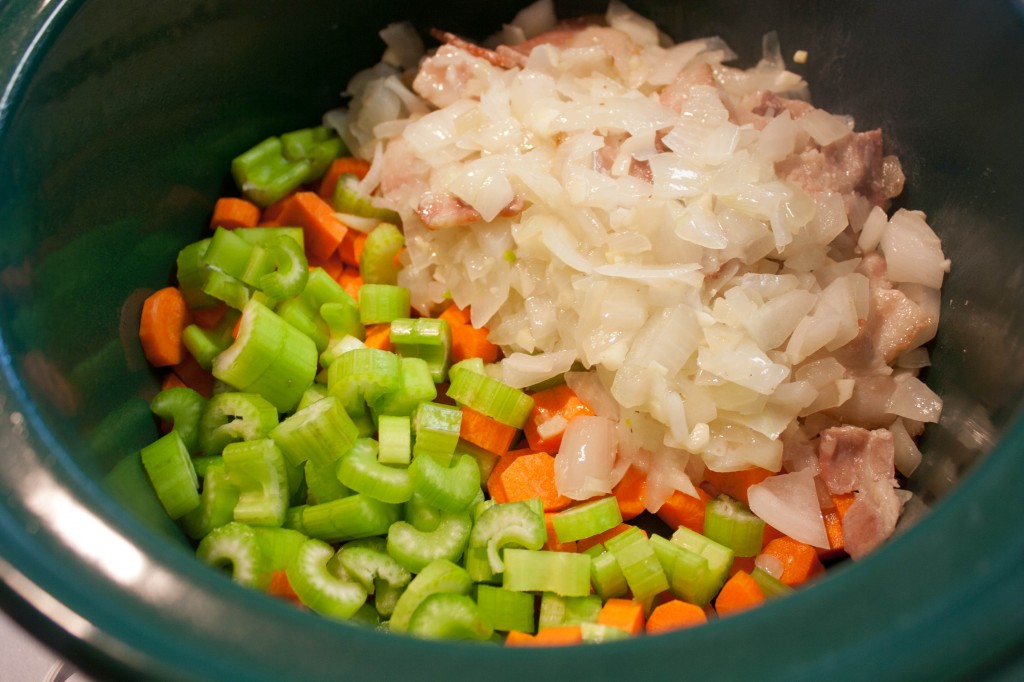 I sauteed the onions, bacon and added garlic at the very end and then put it all in the crockpot on top of the veggies. The rest of the ingredients went in. Bella was helping me in the kitchen, or rather she was waiting patiently for things I might drop on the floor that she can hoover up as quickly as possible. 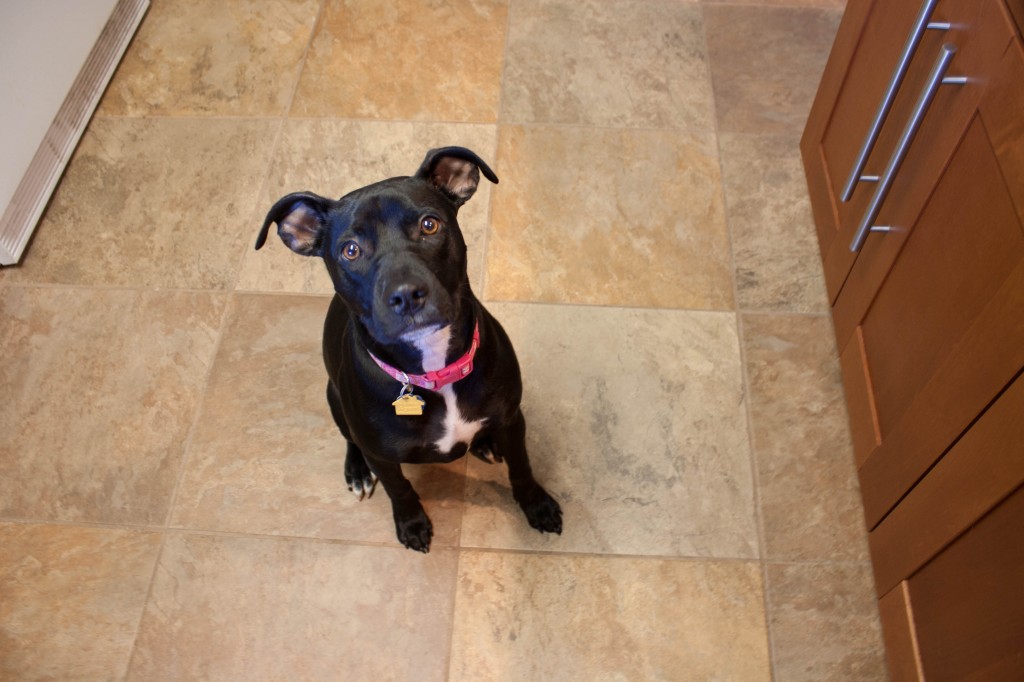 After it was all shoved in the crockpot I took off for the pool. I got in a really nice swim in a mostly empty pool (score!), came home to have lunch, raked some leaves in the yard and then played ball with Bella who had the Puppy Crazies and was doing laps around the yard. Back inside, the kitchen smelled wonderful!

Towards the end of the 9 hour cook time, it was still a little too “brothy” for what I was looking for so I mixed together 2 tablespoons of gluten-free flour and 2 tablespoons of water and added that to the pot. That thickened it up nicely! 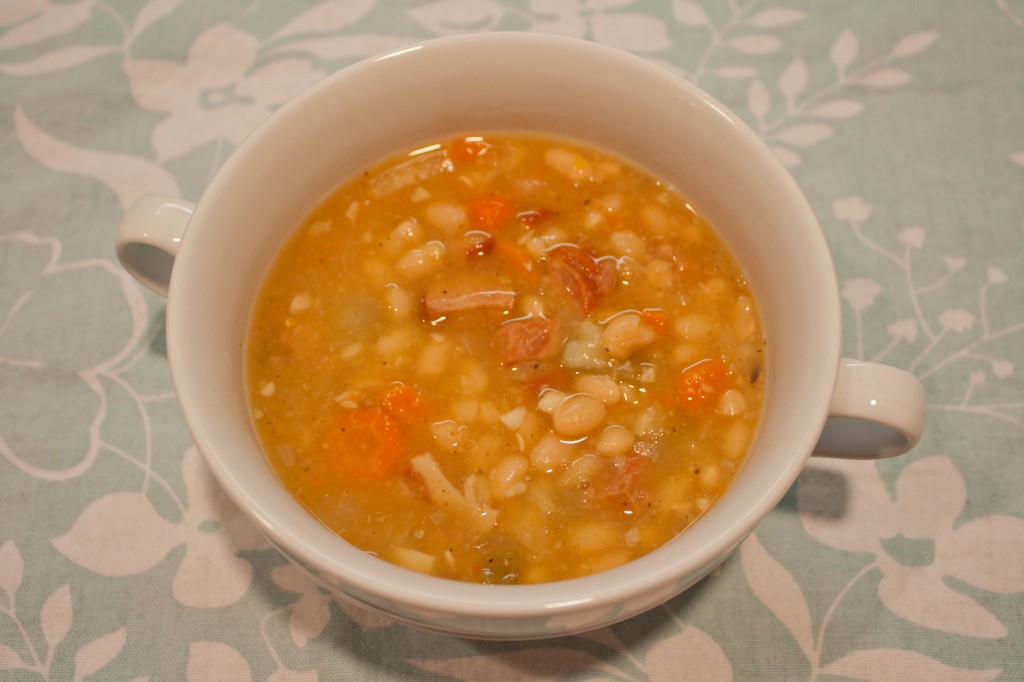 The soup was perfect. It wasn’t exactly like my aunt’s soup but it was close and it was delicious, and that’s what matters. I loved that it had the vegetables in it. As I ate it I realized that the bacon wasn’t necessary, and it actually made the dish slightly saltier than I was expecting. When I voiced this to Michael he disagreed. He loved the bacon in there. So to each it’s own. If you make this dish, the bacon isn’t necessary but it’s tasty. 🙂 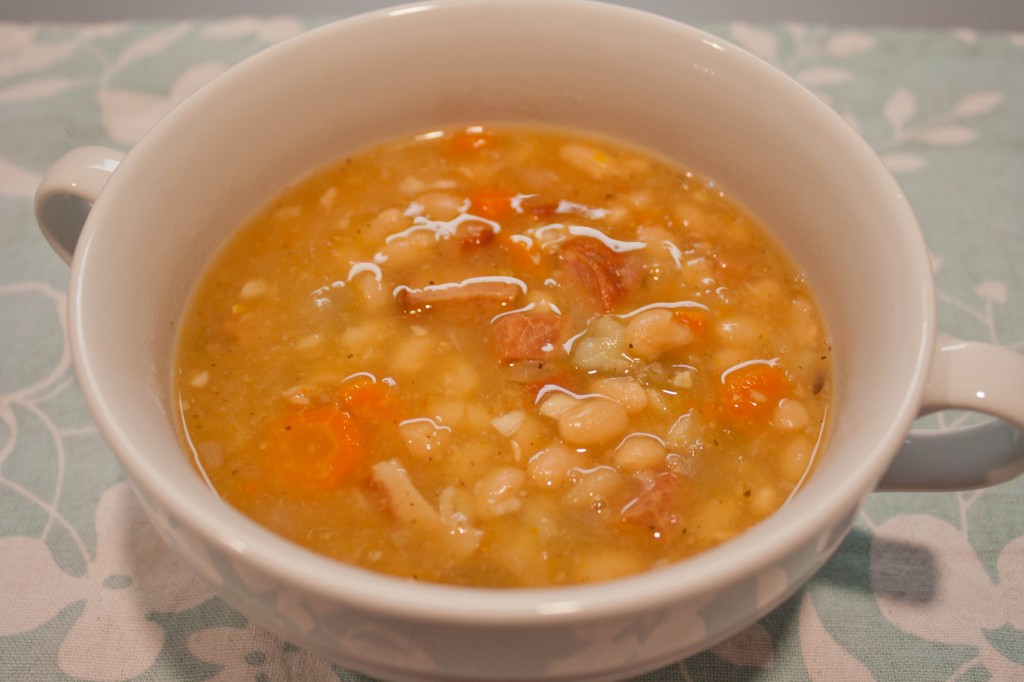 I got about 11 servings out of this recipe, which makes the calories even less than it already was! I was surprised at how low calorie it was.  I even had seconds because it was so hearty and delectable.

Michael’s mom is remodeling her kitchen and supposedly we are getting her old fridge. As soon as we make room in our garage, we’ll get it. It’s going to be great! We’ve talked about getting a big freezer since our freezer is so tiny. This will work nicely. I expect to have a lot of frozen homemade meals in there for later! I know I have three large tubs of Navy Bean soup ready to go in there!

After dinner Bella and Michael cuddled on the couch, complete with Bella snoring. It’s not very lady-like, but it’s adorable. Usually I try to work on her puppy-training homework in the evening while we chill and watch TV but I decided to give her a night off to nap.

Anyways, this recipe is a winner. If you don’t want soup for a month, half the recipe. 😉