A few weeks ago when we had a short burst of really nice weather, I’d planned on biking in to work. I woke up that morning to wet ground and cold air. I decided not to. The day warmed up and turned out to be nice so I could have biked. But I’m a fair-weather cyclist. I don’t care what anyone says, it is no fun biking in 40 degree weather with tears blinding your sight from the cold wind and snot running down your face. Not fun at all.

Last Wednesday I got the chance to bike in! The weather was supposed be gorgeous for several days. I always get nervous and anxious about the first few rides of the season. I don’t know why. I guess I’m just out of practice.

This particular bike in to work was absolutely wonderful. My body felt so great–even at those trouble spots on the trail that traditionally make me struggle. I was feeling so good and made really good time (I’d driven part way in to work and parked).

It was warm (in the mid-50’s), a little chilly in the shade but warm in the sun. There were a bunch of people out biking. On my way I saw these cute little guys: 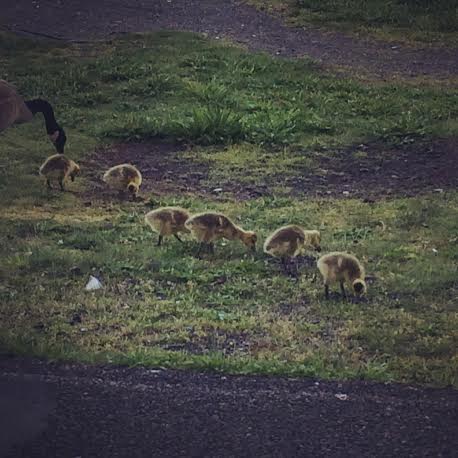 They were so cute. And a little further down the trail I came upon the feral cats that live near the train tracks. I’m not sure who but someone built a cat shelter for them to live in and there was also a water dish. 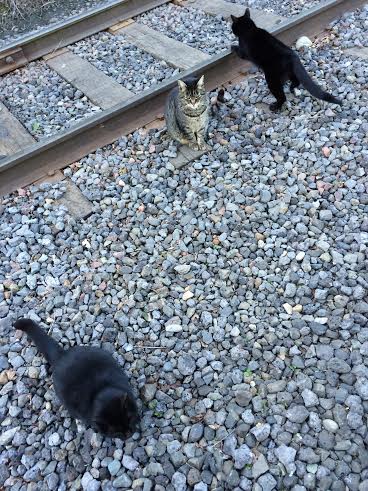 For feral cats they were super friendly and curious about me. Not skittish at all. They looked really healthy, too. 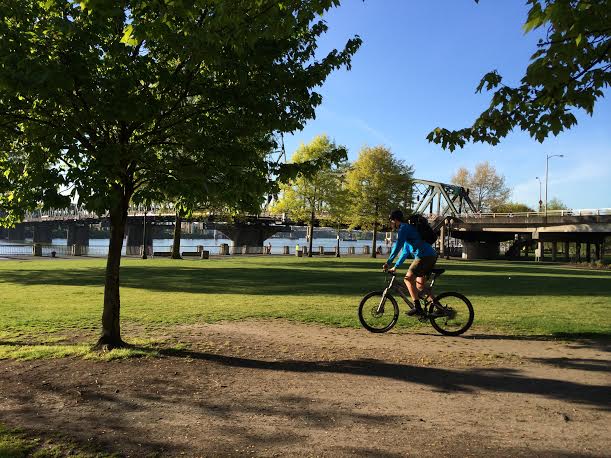 I took the Springwater trail in and crossed the Hawthorne Bridge. Knees felt good. Body felt good. Had a great ride in. 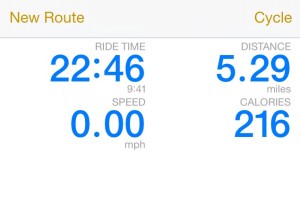 I hope the weather stays nice for awhile so I can get in a few more rides. I usually start about this time of year so I’m not that early. Here were my calories for the morning ride: 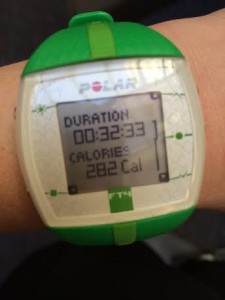 The day progressed into a hot one but it was still really pleasant biking home. The trail wasn’t too crowded either, which surprised me. It was 82 degrees but I was perfectly comfortable. My legs felt good–the only thing not that great was my neck and shoulders. After taking a long break from biking that’s usually the first place to be extra sore when I’m back at it. 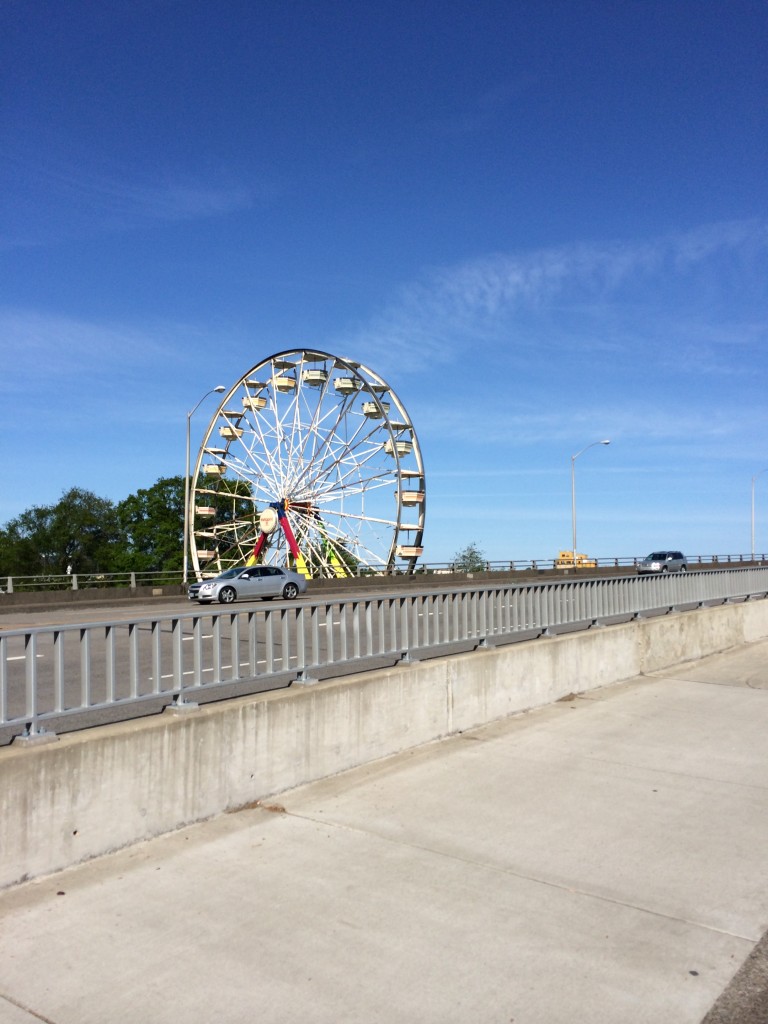 I took the Morrison Bridge across the river and was huffing and puffing a lot. My heart rate got REALLY high but it leveled off on the other side of the bridge and as pretty average the rest of the short ride back to the car (around 135-145). 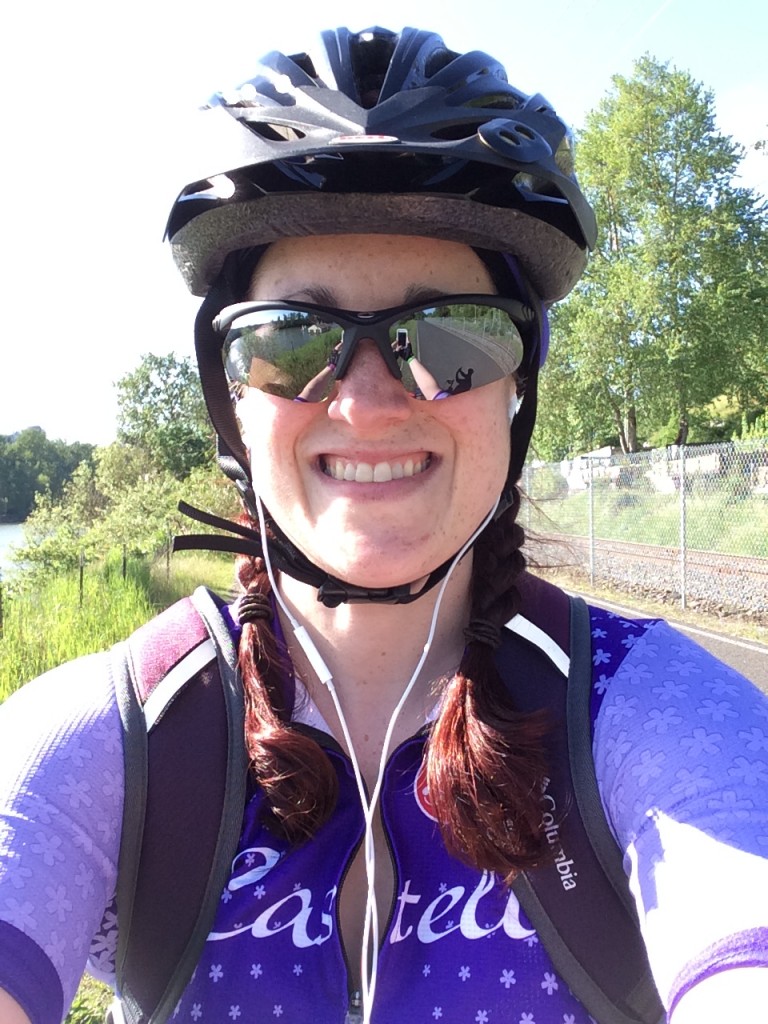 For some reason my heart rate monitor crapped out on me mid-ride so I have no idea what my calories were. I just took a guess. My mileage for the ride home was: 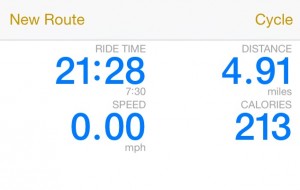 10.2 miles total! I drove the rest of the way home, cleaned up and Michael and I had a little date night. We went to New Seasons and got sandwiches to go from their deli. I am so happy we discovered this–they make outstanding sandwiches! I got a ham sandwich with grilled onions, Mama Lil’s Peppers, Havarti cheese and lettuce. Michael got a turkey, bacon, avocado sandwich on gluten free bread. We split an amazing cookie for dessert. 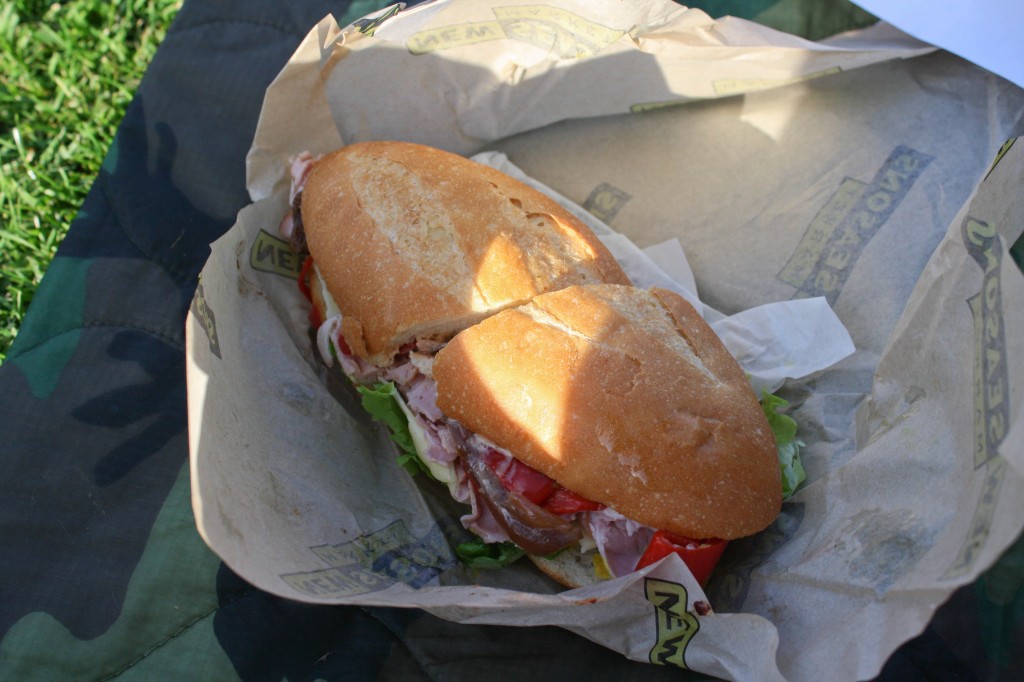 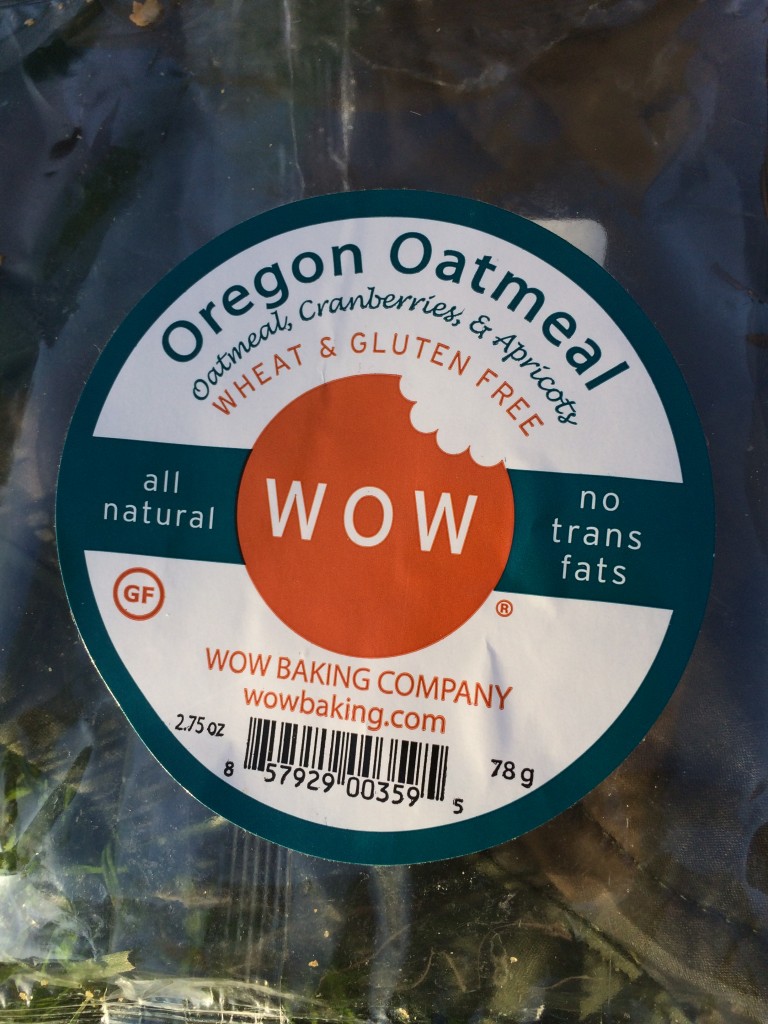 The park was packed! There were so many dogs in the dog area running around. It’s an off-leash park except it’s not fenced. Bella isn’t quite ready to go free in a dog park like that. She’s USUALLY pretty good with her recall but not 100%. She was extra spazzy at the park that night, too. I think she was just overstimulated and super excited there were so many dogs and people around. 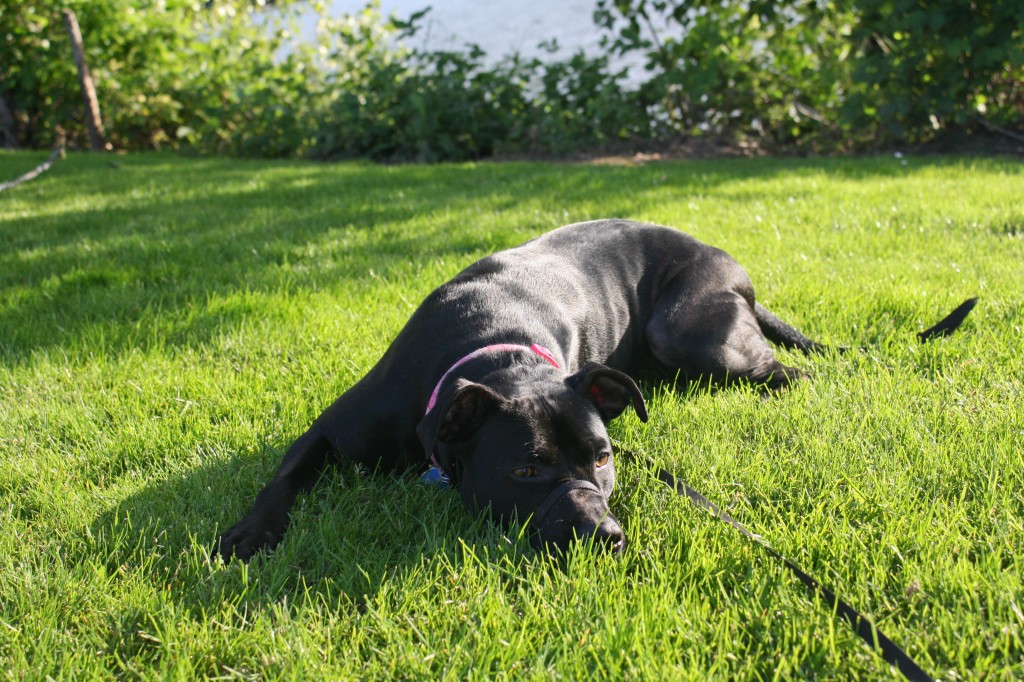 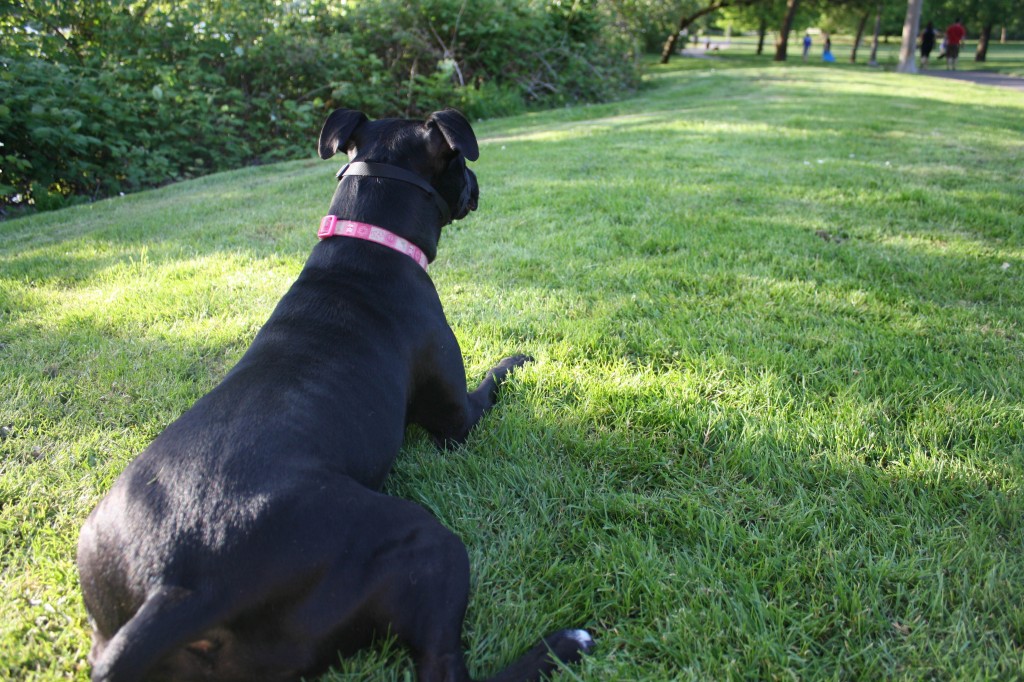 Little Miss Spazz knocked over my drink several times (and then it exploded when I opened it), she tangled herself up in the leash, then ran after a dog and the leash went with her. Grrrr! I know she’s just a puppy and we’re working on her manners but dang, sometimes it’s frustrating! Especially when I see other people with dogs that don’t even have to be on their leash! I hope that someday Bella can be good and stay beside us and come back when we call her. I’d like her to be able to frolic off leash, too… 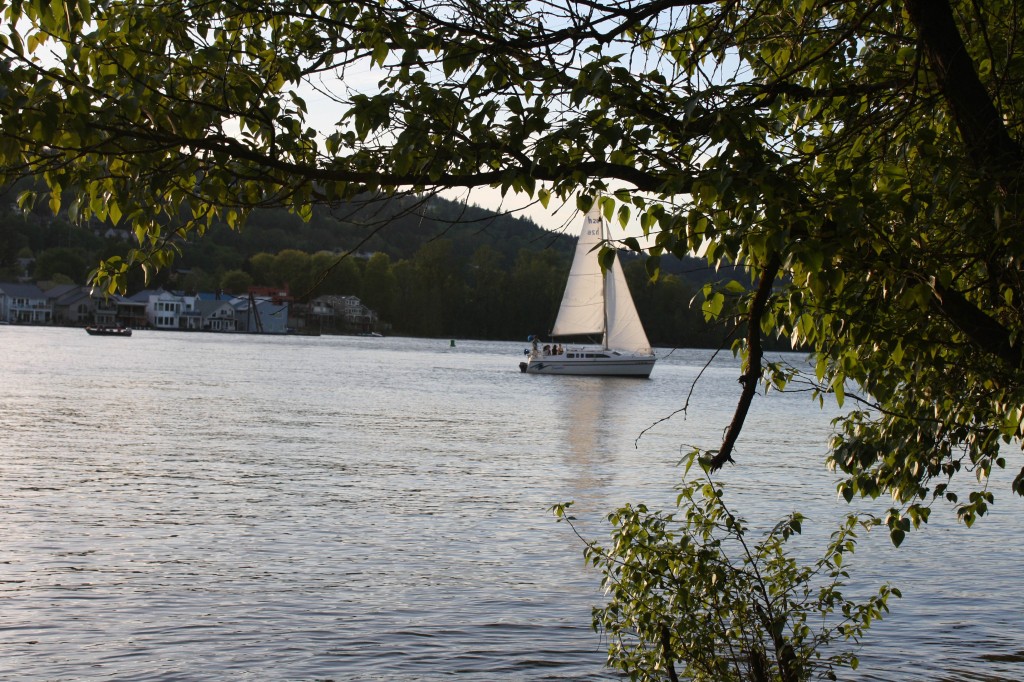 Anyways, Michael and I ate our dinners, chatted and watched the sailboats go by on the river as the run started to set. Then we walked Bella around the park on the nature trails through the woods. 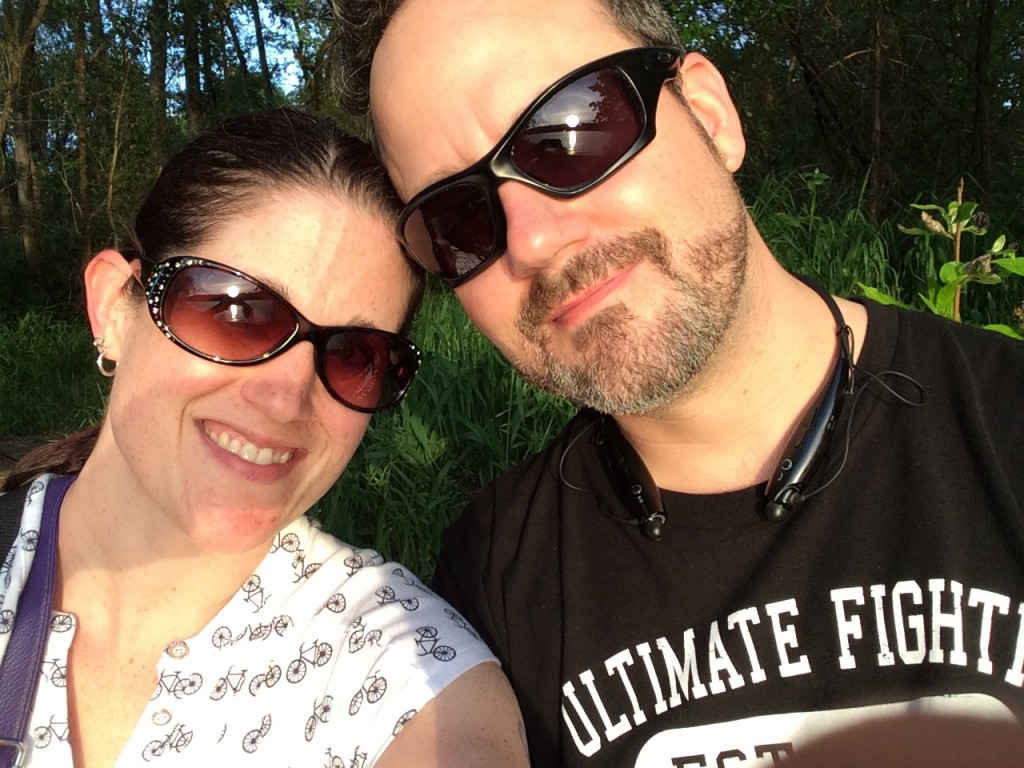 It was a lovely evening and it was nice to get out of the house and shake up the routine a bit. I really hope the weather stays nice so I can ride each week!

You have no idea how ecstatic I am that I biked to work! I’m excited for a number of reasons. The biggest reason is that my knees are healing! The physical therapy, the acupuncture, the personal training…whatever it is, it’s working. The second reason I’m excited is that this is the earliest I’ve ever tried riding to work. Usually I have to wait until May to give it a try due to weather. 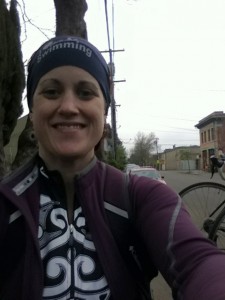 I didn’t bike from home for my first commute this year. Last year I spent all winter going to spin class to keep up with my cycling fitness and it was pretty easy to get back on the bike come spring time. This winter I didn’t do that. Part of me regretted not taking any spin classes this winter, but part of me is glad I didn’t. I kind of burned out on cycling last year because of not having a break. I also got to spend this off-season focusing on strength training and fixing my weaknesses. 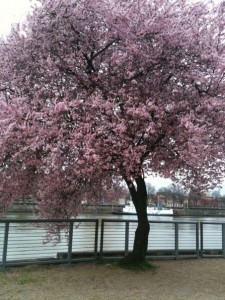 So Wednesday morning, Michael and I drove to Sellwood and rode in from there. It was a short ride, but long enough to make it “worth it”. It was an overcast, chilly morning but the weather promised afternoon sunshine. All I cared was that it was dry. 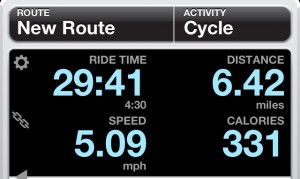 My legs felt pretty good. It was a longer ride than my short jaunt to the gym last weekend and I could tell the difference. While the route to work is relatively flat, my heart rate was pretty high. I just need to practice more. 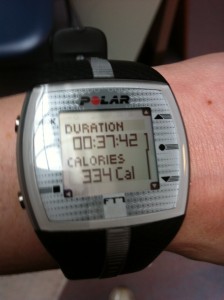 It was so nice to bike with Michael, too. I’ll admit, it was kind of like having a security blanket with me. I was definitely nervous. I’m usually nervous at the start of the season. I guess it’s just that I fall out of practice and don’t feel as confident at the start. Everything went well–my knees were good, my bike was fine–so Michael and I bid farewell and he went over the Hawthorne Bridge to his office and I continued on to the Steel Bridge to go to mine.

I was excited and nervous about my ride home but it went really really well. I definitely noticed that I was slightly out of cycling shape for the hills. I felt the burn in my thighs like I never used to! 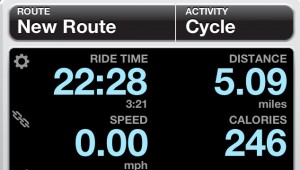 That gives me a total of 11.51 miles! AWESOME! Total calories burned: 590! So so great for a first attempt. 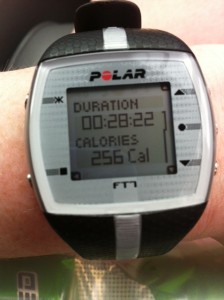 I was famished by the time we got home. Michael grilled up burgers. I had smoked Gouda on mine with some avocado and spicy mustard. We also had some leftover potatoes so he sauteed them with a bunch of spices. 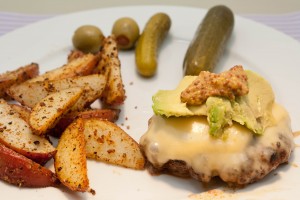 I devoured dinner and one glass of Cabernet and Michael and I had a mini marathon of the most recent Californication season. It was a great day of riding and a great night. The other bonus: I was NOT crippled the next day. My quads were slightly sore but nothing too bad. My knees felt good. I felt strong and healthy. I am so glad!

I have no idea when I’ll get the chance to ride again. The weather is turning ugly and the forecast doesn’t seem to be letting up any time soon. I am so ready for summer. Who’s with me??