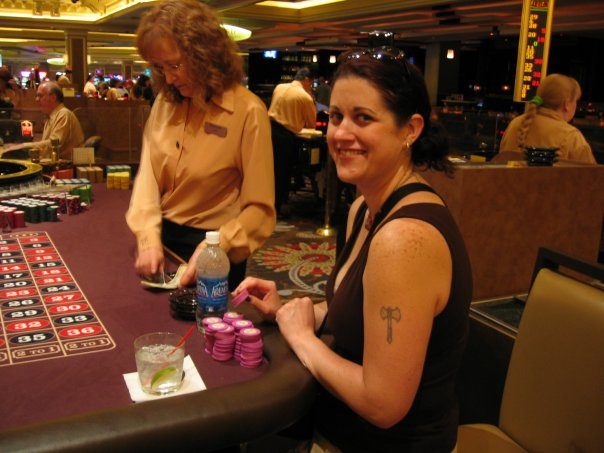 Over the weekend I started to fantasize about how my life would be different if I hadn’t gotten injured back in September.

I would have had to live, eat, breath, dream and think about the Half. I had my sights set on the Vegas Half. Both Michael and I had been longing to return to Vegas and I wanted nothing more than to run down the strip.

Of course, getting to Vegas for the Half would present other challenges. For example, I’d want to drink:

And stay up late gambling:

Then I’d have to stumble to the Starting line to run 13.1 miles. 😉 Sounds like  a great plan, right? I’d also be in debt from plane tickets, Vegas hotels, and of course an expensive dinner at Craftsteak!

So returning back to Portland with my Medal for running the Half, a credit card bill and happy memories…I would have then started training for the Eugene Half Marathon.

After the Eugene Half Marathon I’d be then trying to cram into 2 months a year’s worth of training on the bike because my priority of 2011 would be running–not cycling. Then I would do the Portland Century bike ride.

If I hadn’t gotten injured, I would not have started weight lifting. My body would be just as soft and squishy as it was after Hood to Coast. I definitely would not have any definition in my arms and shoulders like this:

I’d also weigh about 8-10 pounds heavier than I do now.  I lost a nice amount of weight when I stopped running and switched to weight lifting.

I truly believe that everything happens for a reason. Sometimes we have a plan in mind of how we want things to work out. Then something happens to shake it all up and remind us that we really CAN’T plan everything out.

Honestly I was getting a little overly focused on training and racing. Everything was about training for a race. That high is pretty addicting. Instead of working out for fun, or doing things I liked like swimming, hiking, etc all of my workouts were running. I’m pretty sure I was going to end up injured following that path.

Despite being frustrated with my body, getting injured actually ended up being a blessing in disguise. I found a love of weight lifting I never thought possible. I’ve also found some peace in my life in regards to working out. I realized I need to workout because I LIKE it. Not because I’m training for something.

In everything I’ve taken on in my life I’ve learned a positive lesson out of it. This time? I realized that I am much stronger than I thought. In the past I would have been depressed and sad about not running. Sure I have my moments but most of the time I feel like I gained something positive in my life instead of focusing on the negatives.

QUESTION: What is a scenario you’ve recently experienced that turned out to be a positive in disguise?

Like Loading...
half marathon, Hood to Coast, injuries, Las Vegas Half Marathon, running, Running injury, training, What if

The Corpse Reviver and Ghost Orchids

Leave a Reply to Lisa @ I'm an Okie Cancel