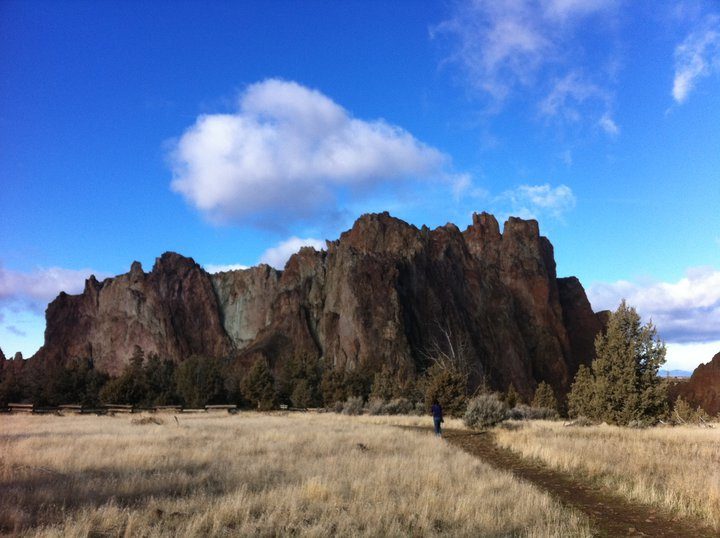 Monday morning I had planned on swimming in the hotel’s indoor lap pool before we headed back to Portland but when I woke up I just didn’t feel like it. I decided to relax instead. We went down to the continental breakfast and I had French Toast (yum) and yogurt with granola and pineapple.

We packed up the car and headed out. I would have liked to go back up to Mt. Bachelor again for one last snowshoe…especially since the sun was FINALLY out! A rain-free snowshoe wasn’t on the agenda though. We checked out the Deschutes Brewery but did not get a tour of the Brewery.

Instead, we decided to stop at Smith Rock State Park on our way back. I’d never been before and I had only seen photos online of it. It was much more magnificent in person. It was early enough in the morning that the sunlight was just right for some great photos.

The sun was out and it was gorgeous. But standing on the edge of the cliff-side it was pretty cold and windy. I saw some people camping right on the ledge too. Scary close to the edge in my opinion, but they are brave souls camping in January!

The drive back to Portland was non-eventful. When we arrived in Portland we stopped at Sckavone’s restaurant in SE Portland. I lived in the neighborhood for years but never went to Schavone’s. I was really missing out.  It was apparently a pharmacy back in the day. It’s now a restaurant with great food.

I got the BLT with a salad and it was perfect. Michael had the chicken sandwich with avocado and I had a bite of that. I’ve never had a chicken sandwich before but now that it’s on my radar it’s all I can think about. 😉

It was a lovely weekend away and I had a great time!