I love Thanksgiving. It’s one of my favorite holidays. Of course, because of the FOOD. My favorite Thanksgiving staple is the stuffing. That’s the best part for me and honestly, the rest of the meal is just okay–I could happily just eat stuffing. 😉

I slept in this year, instead of setting an alarm and racing to the gym to beat the massive crowds–so many people that there is no where to workout and no where to park…in the past it’s been more of an annoyance than anything. This year I got up when I felt like it and I think I missed the crowd! I got to the gym around 10:30 and while it was still busy, it wasn’t bad. I did a modified weight lifting routine–my lower back has been bothering me lately (I think it’s our mattress) and then did .75 miles on the elliptical and .75 miles on the treadmill. That was all the cardio I really wanted to do.

My calorie burn was pretty good! I was happy that that would counter-act some of the calories I was going to eat later. 😉 But honestly, as the years go by and I maintain my weight loss, the pressure to not gain weight from Thanksgiving has gone away. I eat whatever I want and I don’t really gain weight (that is, I don’t gain back 100 pounds) in one meal and I enjoy the food. So why stress?

This year was a little different because we had Bella. I didn’t really want to bring Bella to Michael’s mom’s house because there wasn’t really a place to put her, but the idea of having her sit in her crate all day long sucked too. So we brought her over and set her up on the deck with some toys and her dog bed. She would have been okay but she didn’t really get a chance to settle down.She was barking a little due to some separation anxiety but was starting to calm down when a neighbor complained that she was barking so we put her in the car. Not ideal. Poor Bella. 🙁

Michael’s mom asked us to come over early to help her set up her Christmas tree decorations in preparation for the charity event she hosts the next day. She does this every year and as such, she’s not a fan of doing Thanksgiving. I don’t blame her. The amount of work that goes into that one meals is enough to make anyone dread it! That’s why I like potluck style!

Anyways, this year Michael’s stepbrother ordered the complete meal from Zupan’s, a nice grocery store here in Portland–kind of like a Whole Foods. He picked it all up and everything was cooked, it just needed to be reheated. While we waited for Doug to arrive, we decorated the tree and admired the new kitchen remodel which is gorgeous! 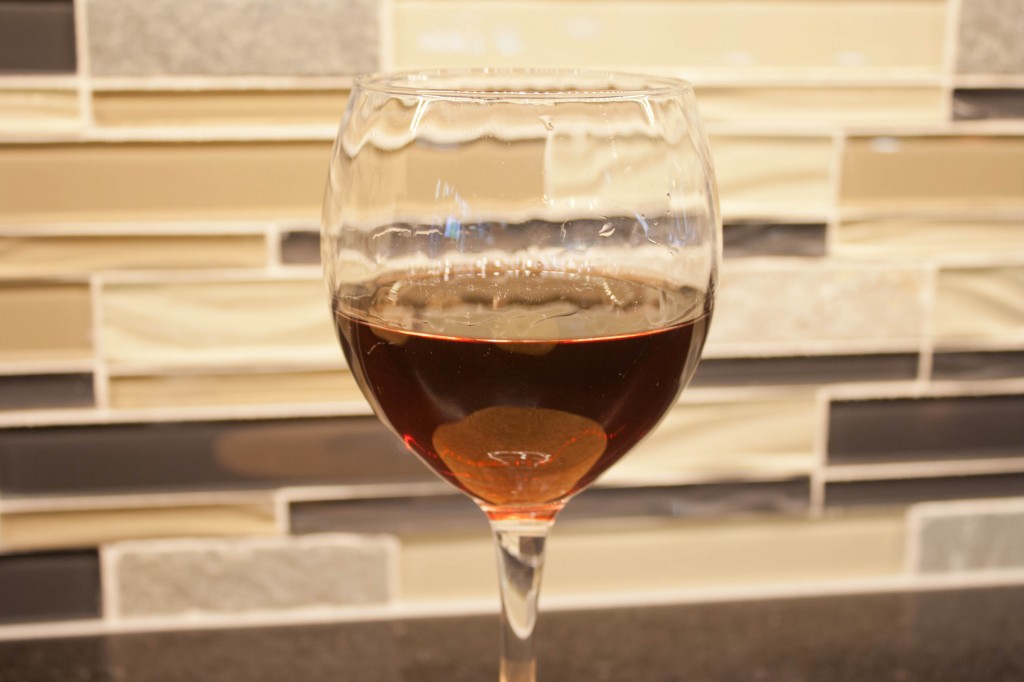 They had some really tasty local wines. When Doug arrived the turkey took about an hour to reheat in the oven. While that was happening, the Brussels sprouts were warmed up on the stove, Michael’s stepsister chopped up sweet potatoes and baked those and also heated up Michael’s mom’s homemade cornbread stuffing. 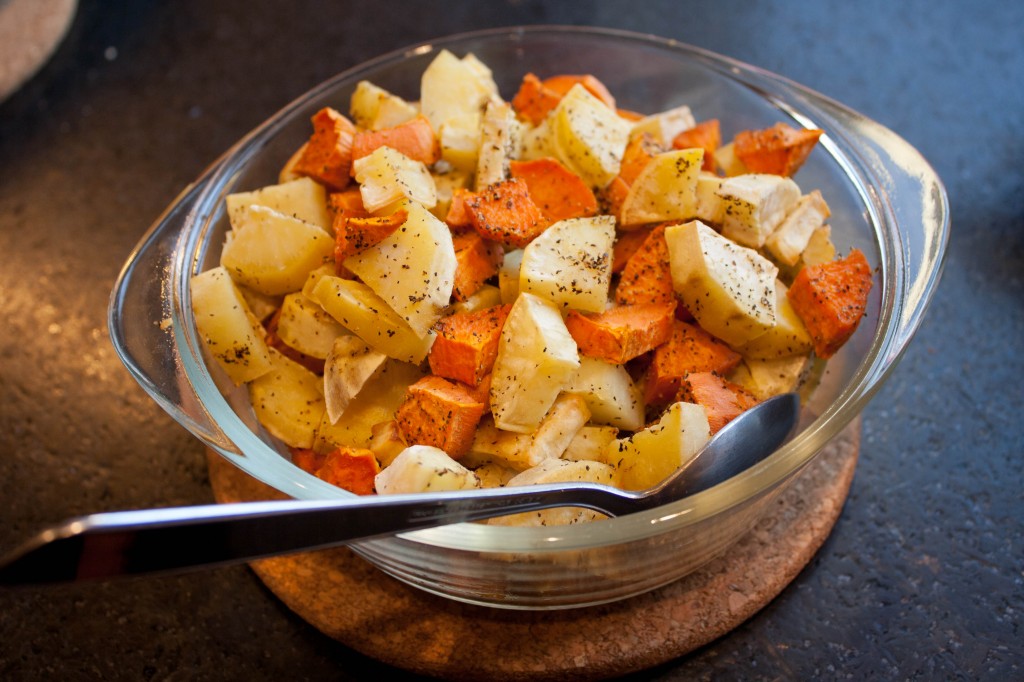 The complete meal also came with rolls and mashed potatoes, green beans and stuffing. The stuffing was AWESOME–so good!!! The mashed potatoes were ok. I like my mom’s better. 🙂 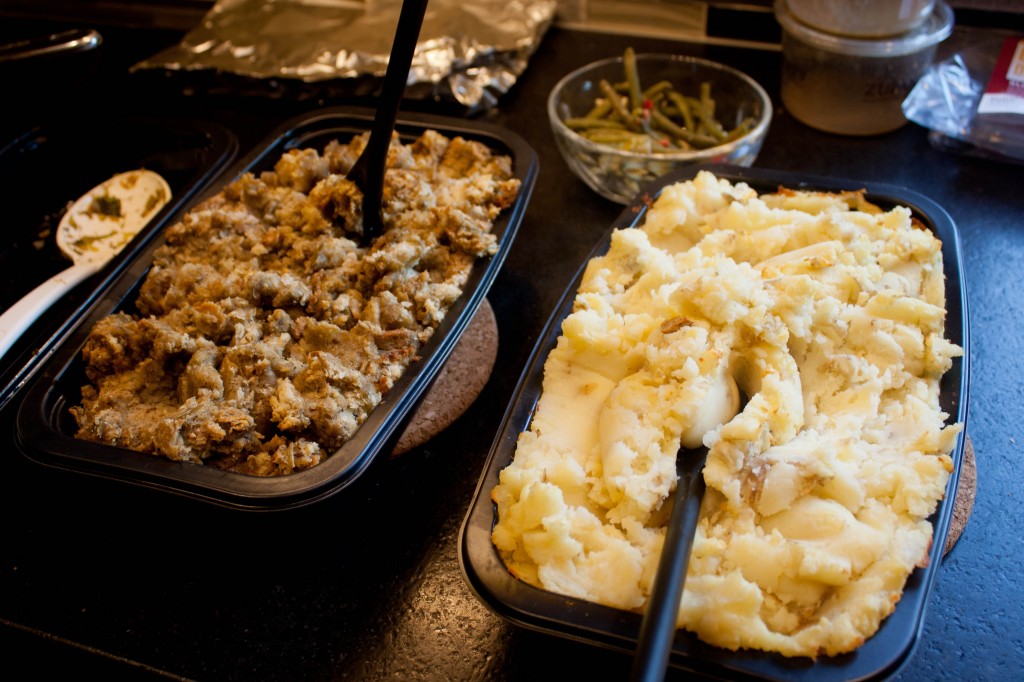 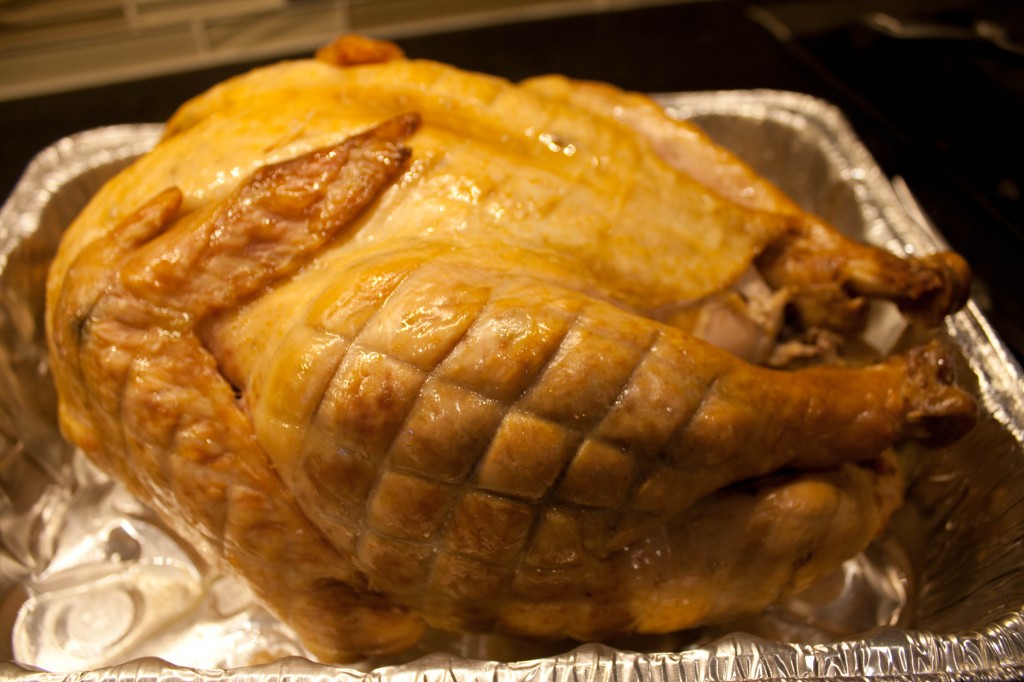 The turkey was gorgeous and perfectly cooked. It was golden on the outside, juicy on the inside. It was really impressive. Michael said the only thing he wished was different was salt and pepper seasoning on the outside skin would have been nice. The cranberry sauce and gravy that came with it all was outstanding. Seriously, this meal couldn’t have been better. Everything was so tasty. I was impressed by Zupan’s! 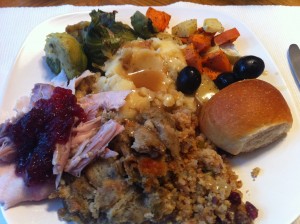 I had a little bit of everything and A LOT of stuffing. YUM! I started out practicing moderation and ended up eating way more than I usually do. To the point of having a bit of a stomach ache. But man everything was so tasty! 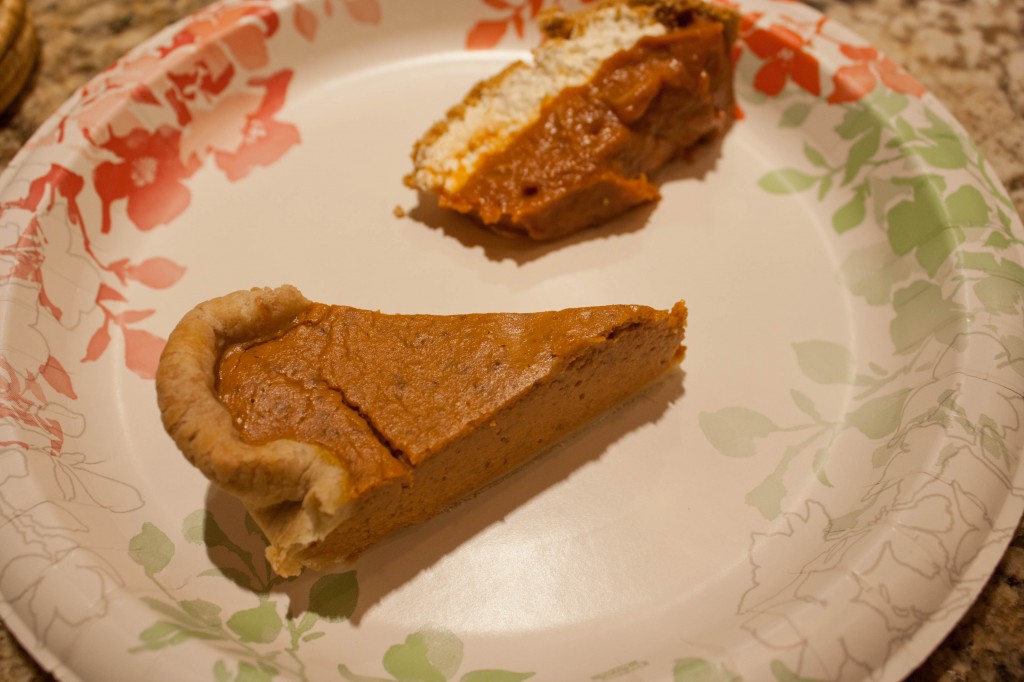 After pie Michael and I headed home and Bella was happy to be reunited with us. The three of us cuddled on the couch and watched a movie. Then Bella fell asleep on the floor by our feet and Fat Kitty came out! Into the living room! I saw him sneak into the living room and look for Bella, walk around cautiously to see if he could make it to the couch without her seeing him. He realized she was asleep and made a bee-line to the couch. He cuddled with us on the couch for the first time in almost two months! It was a Thanksgiving MIRACLE! 🙂