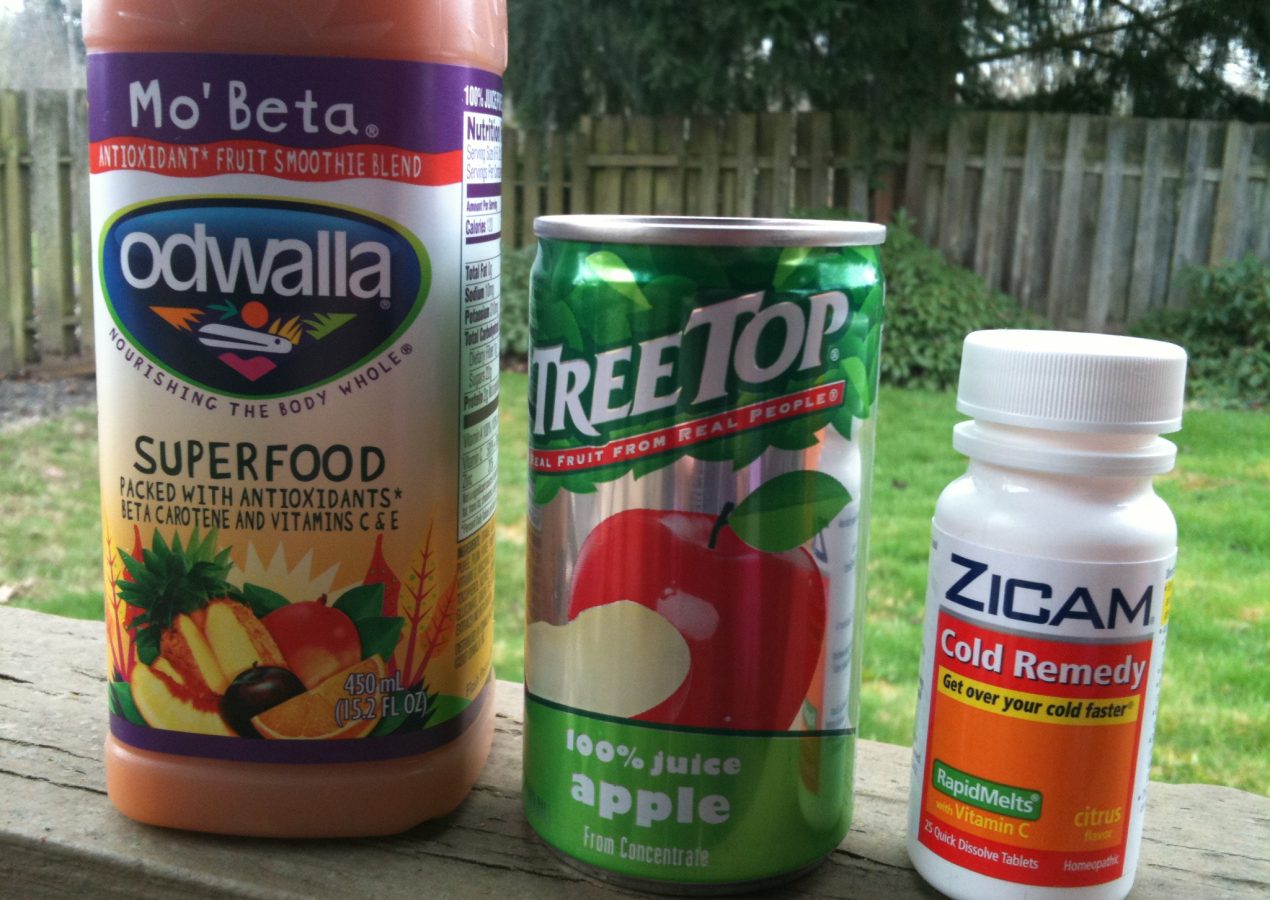 Thursday I woke up feeling like a train had hit me. I caught Michael’s head cold. 🙁 I didn’t have much of an appetite either but I knew I should eat something. I had oatmeal for breakfast, watched Big Love on Netflix and then made a salad for lunch.

Even though I didn’t have much of an appetite the salad hit the spot and kept me full for the rest of the day.

Tomato, lettuce, carrots, broccoli and bacon. 🙂 I also tried a new salad dressing that I’ve had for a little while in the pantry. Something that I do that drives Michael nuts is my love of salad dressing. I buy a lot of salad dressing–in his opinion I need an intervention. But I don’t see it as a problem! I like trying different flavors.

I was drinking tons of Airborne, water and plain iced tea yesterday. I was so sick of it!

I was starting to feel better yesterday afternoon and then went downhill again in the evening. Michael was sweet and brought home comfort food. First, some diet coke (so sick of drinking Airborne). Plus he picked up a deLite pizza from Papa Murphy’s.

Whenever I get sick I want comfort food. It’s not always healthy food but it makes me feel so much better. The pizza hit the spot. We settled in and caught up on TV shows (Parenthood, Top Chef). I was snuggled under a blanket with my heating pad eating pizza and drinking soda. Heaven. I was NOT happy with who went home on Top Chef this week. He was my favorite person on the show and it’s a disappointing outcome. I think the guy that should have gone home was the one they made the “Salt Lick Sandwich.” I mean really, a chef should not be over-salting food. That’s like Day One of cooking school, right?

Michael was a dear and also brought home ice cream…which felt great on my sore throat. Plus, he had one of these:

OH YEAH! A Kitchenaid Mixer!! We’ve both wanted one for AGES and I actually got to test one out a few months ago at a friend’s house. It was a dream to use and I wanted one of my own. Michael is a genius at finding internet deals and he found a mixer at such a great price we HAD to get one. I can’t wait to be over this head cold so I can try out the mixer.

Friday I woke up feeling just as sick as I did yesterday. I called worked and went back to sleep, feeling like an elephant was sitting on my head. 🙁 I ended up sleeping in Friday until almost 11am. I guess I really needed the rest. I got up, ate some oatmeal and showered. That made me feel almost human. I decided to walk up to the grocery store to get some medicine, fruit and something for lunch.

It felt really nice to walk outside and get some fresh air after being cooped up in the house. I was walking slowly, feeling tired and lacking energy. I also bought some apple juice and orange juice. I normally don’t drink my calories (unless it’s wine!)  but when I’m sick I crave juice!

I diluted the juices with water. I made the soup for lunch and had some strawberries for a snack later.

I am ready to join the land of the living. I hope that I can actually do something fun this weekend instead of laying on the couch sick. Boo.

QUESTION: What attachments do you have for your Kitchenaid Mixer? Any suggestions on our first recipe to try in the mixer?

A Valentine’s Date and a Recipe