Biking to the Gym 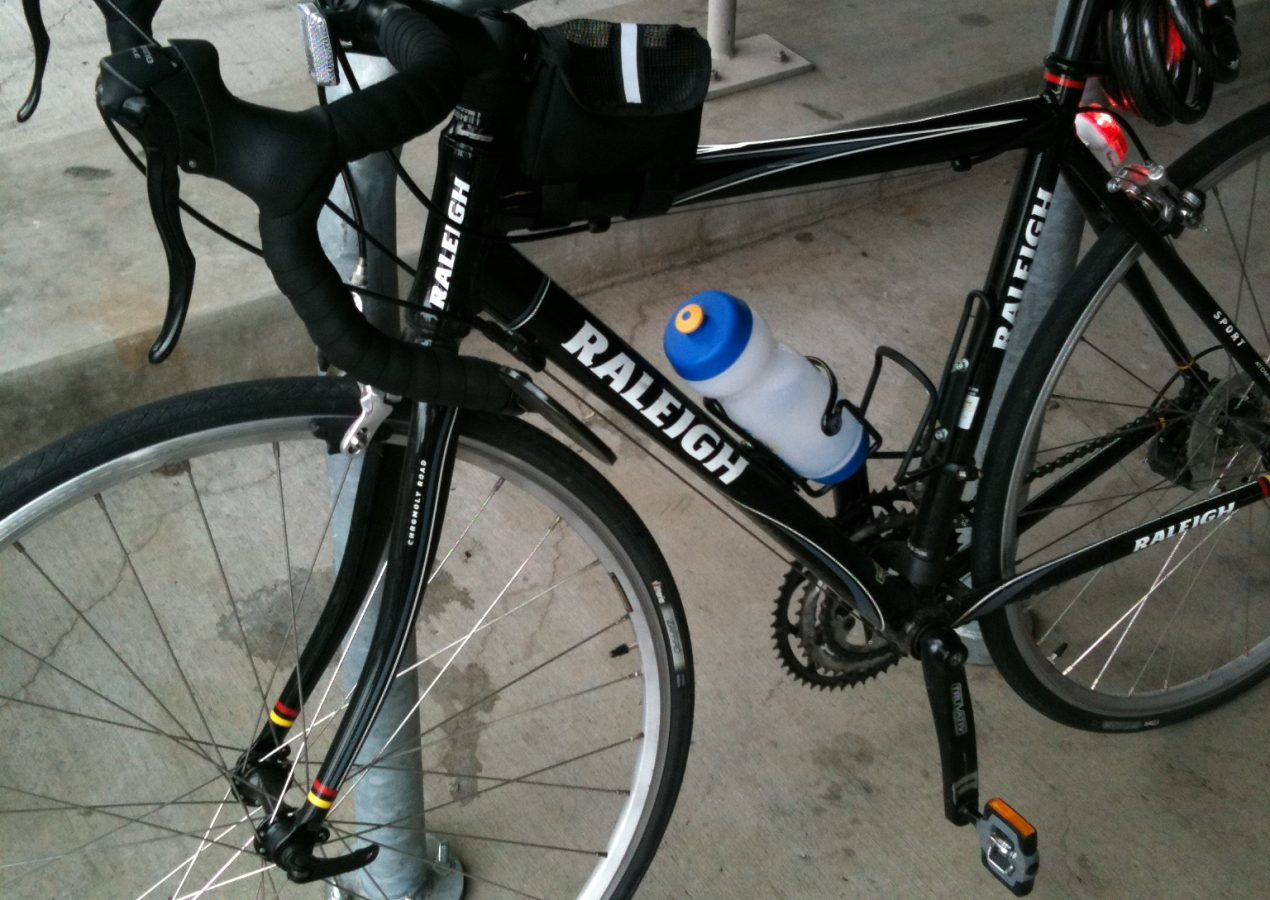 (For some reason this post got lost in my Drafts folder. So here it is, a few weeks late but still good!)

Michael was too sore from one of his commutes so we skipped the bike ride together. I was kind of bummed that we weren’t riding, but I also wanted to go to the gym to do weights. I decided to try something I’d been thinking about trying for months. During a swim one Sunday I had the brilliant idea of biking to the pool. That way I could log more time on the bike without giving up the things I love to do (like swimming or weight lifting). There’s only so much time in the day with a full time job, boyfriend and friends to fit in all the fitness I want to do.

I loaded up the things I’d need for my weight lifting session into a backpack and prepped my bike. Since I was only going to be doing weights all I really needed was my change of clothes, a change of shoes and my gloves I lift in. I wore my cycling clothes and shoes and rode out from the house to the highway. I took the bike lane to the I-205 Bike Path.

I don’t think summer will ever arrive in Portland! It was overcast and rain was in the forecast. I wore my rain jacket even though it was insanely hot in that jacket.

The bike path was a short ride but it was uphill. Once I got to the first intersection I turned off the bike path and rode my bike down the road toward the gym.

It was a super short bike ride, but that was okay. I got to the gym and locked up my bike in the garage. I have to admit, I was a tad nervous about leaving my bike but I told myself that it would be safe locked up. I may have peaked out the window a few times to make sure my bike was okay! 🙂

The bike ride to the gym was a little less than the 3  miles. I had to run back to the house for something before I got too far.

In the locker room I quickly changed out of biking clothes and into my workout shorts and shoes. I have to say, it’s rather strange to ARRIVE at the gym already sweaty and gross. And it’s even weirder to try and put on spandex when you’re sweaty. Gross. I hit the weights.

I was feeling pretty good about my bike ride! Sure it was short, but it got me to the gym easily and with no incident. It felt really good to not use my car, too. I lifted weights using the plated machines.

Then I decided to go over to the other weight room that I used to use and do a few of those machines (and check on my bike).  I hopped onto the Pec Fly machine that I used to love! It was nice to see that I had to increase the weight on it because I’ve been doing so well with the other machines. That’s progress!

I also used the triceps dip machine that I haven’t used in ages either. The setting I used to use on it was way too easy and I increased the weights. That felt good.

I was feeling so good about my progress that I hopped on over to the Gravitron machine to do the triceps dip and pull ups on it. I felt strong and confident. It was a great feeling.

I spent some time with the free weights and then finished up with ab work.

Lots of Russian Twists. It burned good! I need to get my brain to match what I see in the mirror, though. It’s funny how you can feel one thing, see another thing in the mirror and then see a picture and think “Oh, I look alright. Why was I being so critical of my reflection?”

My workout done, I changed out of my sweaty gym clothes and back into my sweaty biking clothes.

The bike ride home started with a big hill. I wasn’t worried about my abilities but I hoped I had the stamina to make it after working out at the gym (including squats!). The good thing is that the bike lanes are wide and the street isn’t a super busy street.

I got to the top of the hill and turned onto the bike path. The rest of the ride home was fast, easy and for some reason it took me less time than it did to get to the gym!

It was a cool experiment. It might be a good way to get in both a bike ride and a weight session this summer. Plus, there’s another route I can take to the gym that is a little bit longer and it’s ALL hills. That would be a good workout!

QUESTION: Do you use your bike to get around town? Have you ever biked to the gym before?

My Mind is Playing Tricks on Me

Leave a Reply to Jill Cancel