Time for the third update. I’m almost done. I can see the finish line from here! You can read the first post here. I encourage you to follow my progress on Facebook and Twitter as I will be posting more updates in those places.

I’ve gotten used to the diet now. I do not miss bread or anything with gluten. I sort of miss other things like cupcakes, ice cream, and oddly enough–banana pudding. I think I’m just craving those things because I can’t have them. This just reinforces what I’ve been doing for 5 years: eating whatever I want but in moderation. Doing that keeps me from getting this crazy obsessive cravings that make me want to binge.

I wish I had something magical to report. Honestly, I still don’t feel any differently. I WISH there was something. My skin is a little better. I haven’t had any acne breakouts this month, but I don’t know if I can attribute that to going dairy-free yet.

What I can report is that Michael feels like a million bucks. He’s still eating dairy but he gave up gluten entirely. He has noticed a lot of changes and like I said in the last update, it helped his snoring. He’s sleeping much better and I’m thankful for that. He wants to continue doing the gluten-free thing long term. I can support that.

I’m kind of sick of eating rice. I feel like I eat it every day now because it’s gluten-free and easy to make. It’s also something “safe” I can order in a restaurant. I definitely need a break from eating rice!

Something I discovered and wanted to share was an iPhone app I found. It’s called “Shopwell” and it’s a free app. You enter your requirements in it: dairy free, vegan, vegetarian, low calorie, diabetic friendly, etc etc. The list goes on. Pretty much any dietary restriction is listed. So you enter that in and then you can scan foods and it will tell you if it fits your requirements.

My requirements were gluten free and dairy free. I’ll give you some examples. I scanned my raisin box: 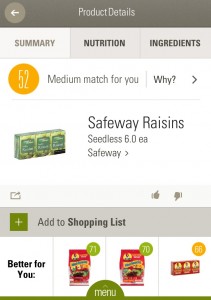 It was okay for me to eat. I scanned a Fiber One Bar, which I knew I couldn’t eat, but to give you the example: 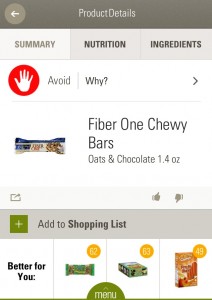 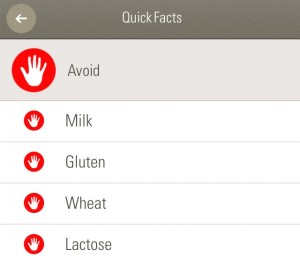 The app recommends I avoid the Fiber One Bar because it has milk and gluten in it. It also gives better alternatives at the bottom. The app would be good to use while grocery shopping to find the better alternatives. It’s a really fun and useful app. If you have any kind of dietary restrictions, check it out.

Michael accidentally bought the UNsweetened almond milk at Costco (i.e. a case of it) and I was worried we were now stuck with like 10 cartons of something we’d hate. Luckily, the unsweetened wasn’t bad. I used it to make chocolate “milk” (how weird is it that chocolate syrup doesn’t have dairy in it??) after the gym, I drank it straight and liked it, and used the almond milk in a bowl of cereal. The sugar from the gluten-free Apple Cinnamon Rice Chex sweetened the almond milk and it was a delicious breakfast. 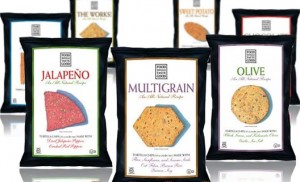 Michael also got some gluten free tortilla chips. We are both fans! They taste just like regular tortilla chips and are salty and crunchy and delicious. Love them! The photo above is what we got, in case you wanted to try them. We tried the multigrain flavor. The jalapeno looks pretty good to me, too.

I made two dairy and gluten free recipes this week. The first one was a fabulous dessert that I will most definitely make in the future. The second was a spicy Asian dish that was also good.

If you’ve never tried spaghetti squash, I encourage you to try it. It’s a fantastic alternative to pasta. Even if you aren’t gluten free, for some people pasta is a trigger food or it wreaks havoc on their blood sugar. The squash has a very similar consistency to pasta. It’s savory and satisfying and a serving is about 40 calories. 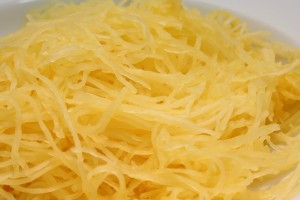 It even LOOKS like pasta! Last night Michael and I made spaghetti squash with marinara sauce and sausage. I cut the squash in half, scooped out the seeds, and placed it face down in a dish with some water in it. I baked it at 350 degrees for about an hour. Then I scraped the insides out and it came out like spaghetti noodles. 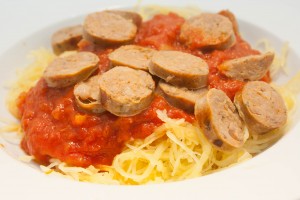 The sausage was less than 200 calories, the squash was around 60, the sauce was around 100 and I had a green salad on the side full of veggies. Such a great dinner! It’s been years since I’ve done spaghetti squash. I need to do it more often.

The most common question I got was: “Did you phase it out or go cold turkey?” I’m definitely a cold turkey kind of person. It works better for me to just DO something when I have the initial drive and fire of motivation. Phasing it out over a few weeks would have just made me lose interest and desire to try it. I also do better with specific dates. Having something like that to focus on gives me direction. I wanted to start officially on February first and end officially on February 28th because mentally it seemed like a short period of time. I think one of the reasons I failed with the Slow Carb diet was because I didn’t have any schedule in mind. I said “Oh I’ll just do it for a few weeks and see”. I need that specific date!

QUESTION: How long do you last on a diet before you are burned out?