The nice weather continued into the weekend, which made me super happy! Friday night I went swimming and then we ate a delicious dinner of blackened ahi tuna and brussels sprouts. After dinner we took Bella for a walk in the neighborhood. Trees were blooming, flowers were everywhere, the air smelled fresh and like spring. I love it when evenings get longer and the sunset is slower. Saturday I woke up to more nice weather and decided to skip the gym and go for a hike. Michael and I went to breakfast first–at The Bomber. I’ve never been but have driven by it many times and have been curious about the huge fighter plane in the parking lot: 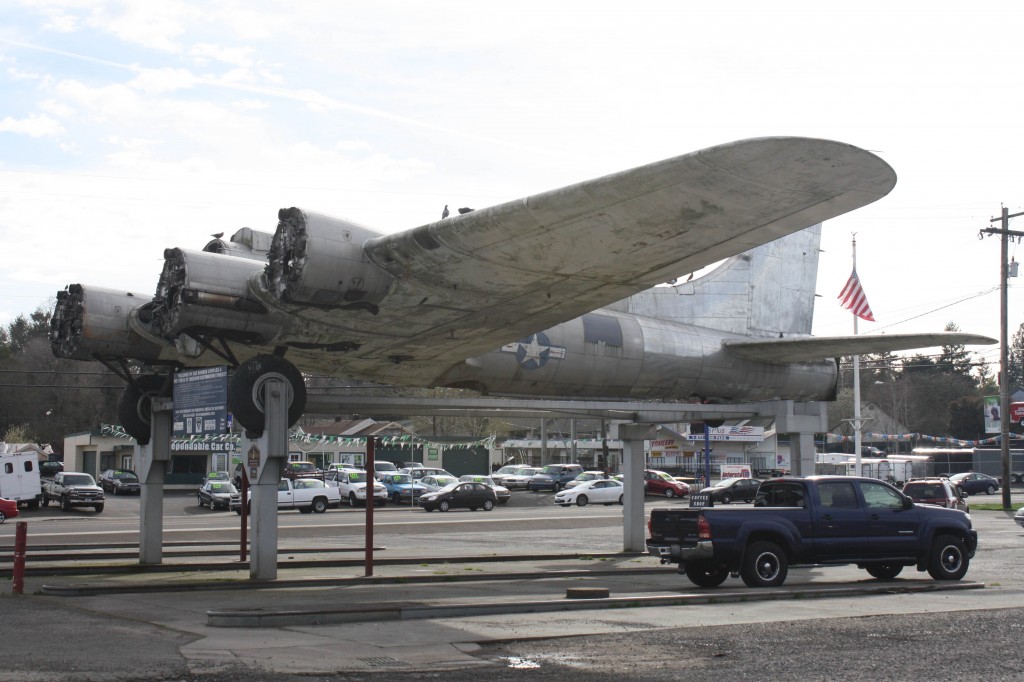 I think we were the youngest people in the restaurant, but who cares? Inside there were a lot of World War II memorbilia–a machine gun mounted on the all, photos, newspaper clippings, etc. 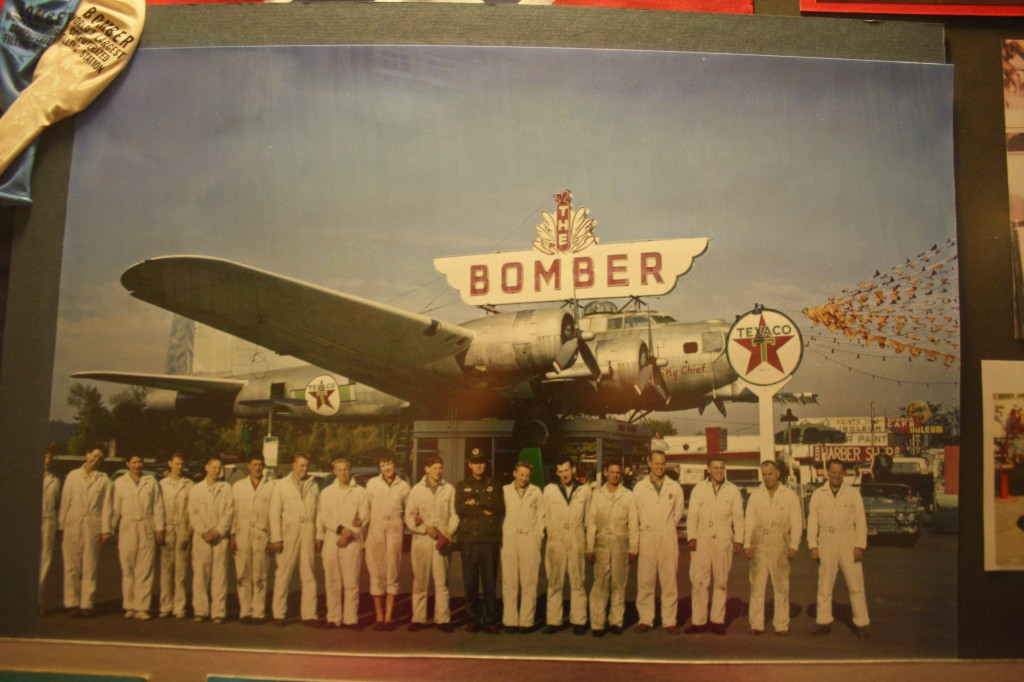 They had a section of the menu with smaller portions–which made me happy! I got the small plate with one egg, one sausage link and one piece of French Toast. I had a lot of coffee, too. The French toast was tasty. It was just the right amount of food for me. Michael got scrambled eggs and bacon and toast–which was gluten free. It’s awesome that they had that option for him. 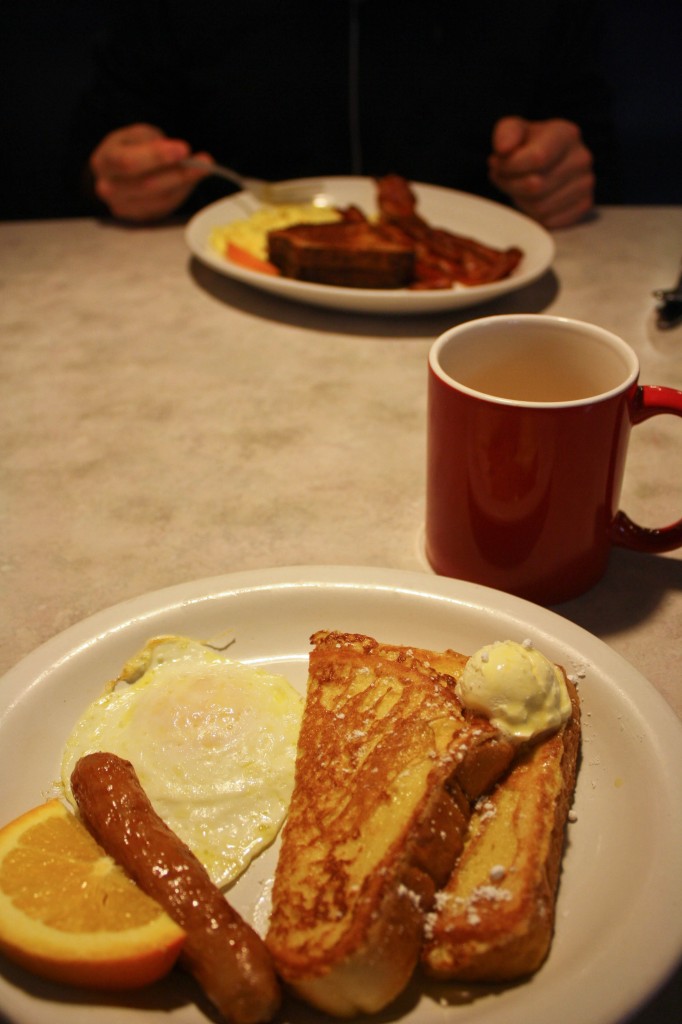 After breakfast we headed west towards Forest Park on Highway 30 (St. Helens). I had suggested we do a hike in Forest Park (which is a huge park in Portland and part of Washington Park which includes the Japanese Gardens and the Rose Gardens). I found a hike online and we were able to locate the trailhead pretty easily even though the directions were vague. I had used this website for ideas on hikes.

We did the Firelane 12/15 Hike. It was an old fire road through the old growth forest and the trailhead starts at a dead end street next to residential houses. It was somewhat odd parking in front of someone else’s house, but there were a few shoulders that were wide enough to park on. 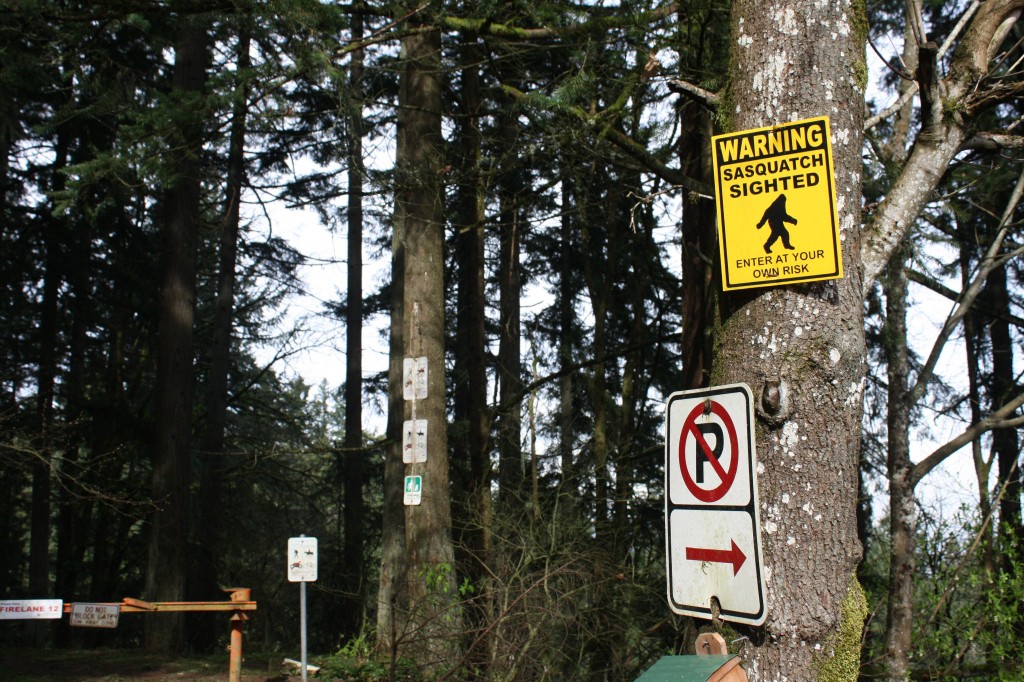 Bella’s paw got re-injured last weekend. Thankfully it was a mild cut and we’ve been treating it for the last week. Just to be safe she wore a bootie on the paw. She walks much better with only one bootie on. 🙂 Michael bought a dog “backpack.” It’s got two saddle bags that are big enough to hold some snacks, poo bags, and her travel water dish. It wasn’t too heavy or anything and she didn’t seem too bothered by it. 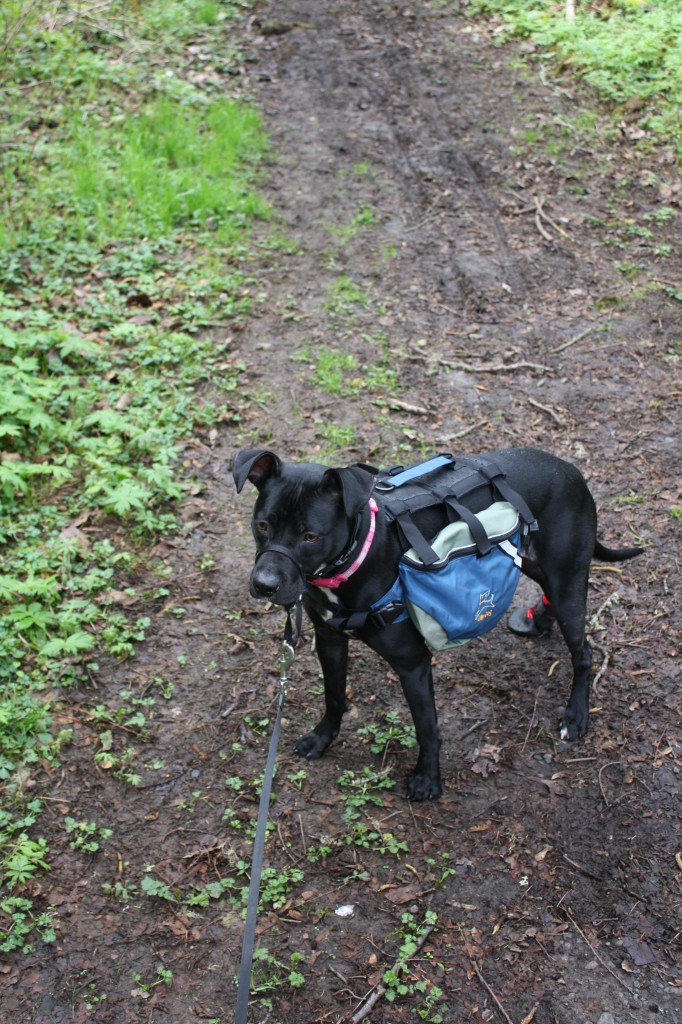 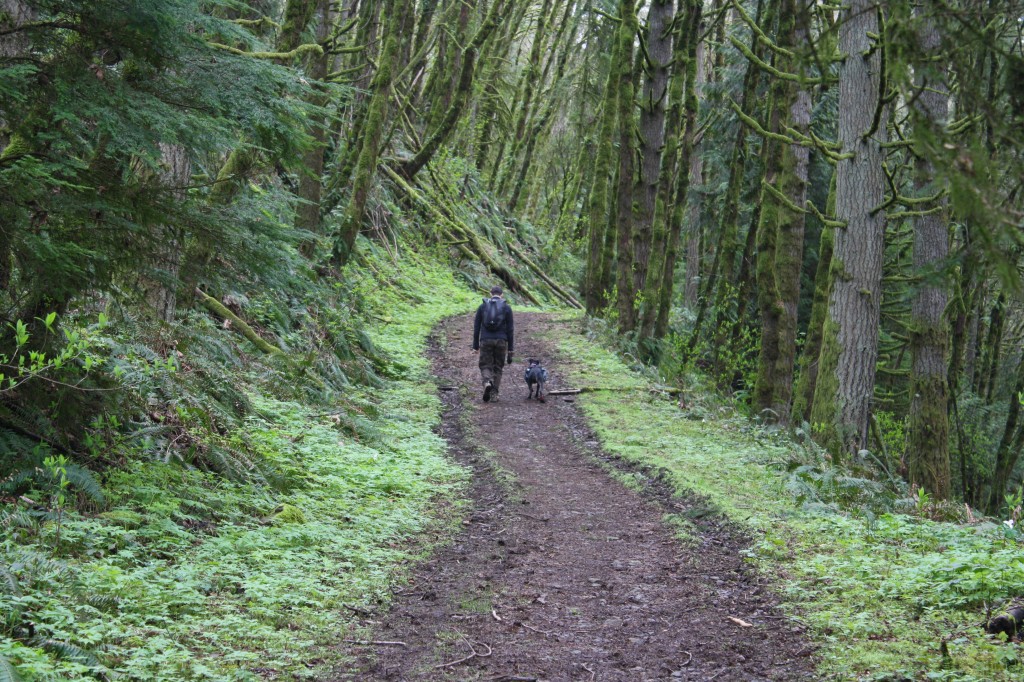 The trail was deceptive. At first I thought it was going to be a super easy hike but then the road started to climb. There were at least half a dozen VERY steep parts to the road. My heart rate got very high on those hills. 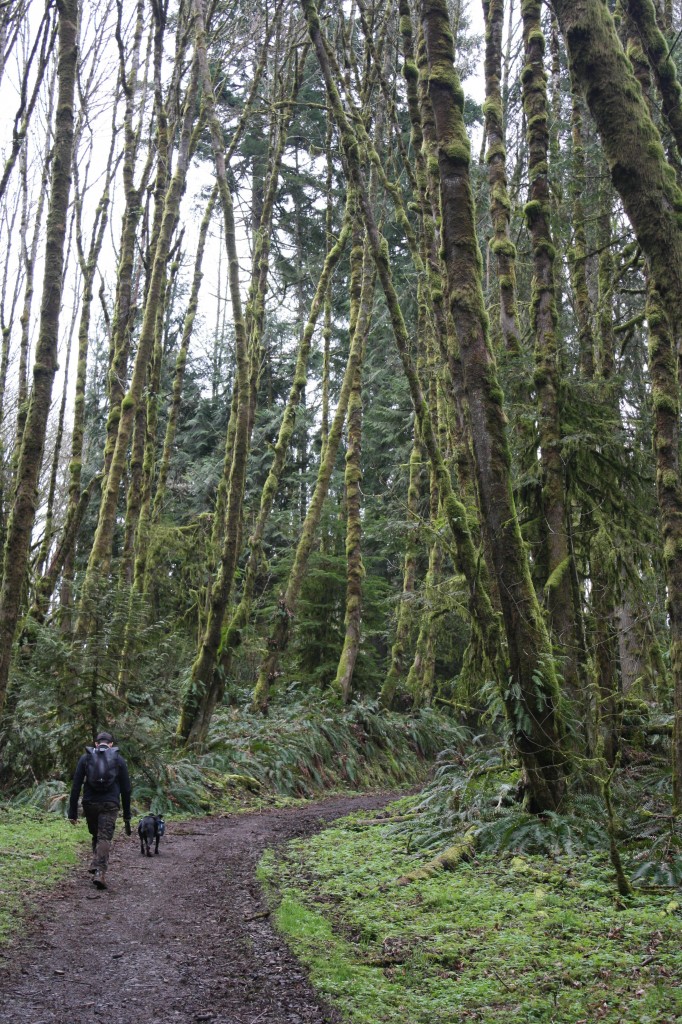 The trail was muddy in parts but it wasn’t too bad. Bella did well on the hike and didn’t seem to care about the hills. We were the only people on the trail and never saw any other hikers. We did see evidence that someone had been there recently, though: 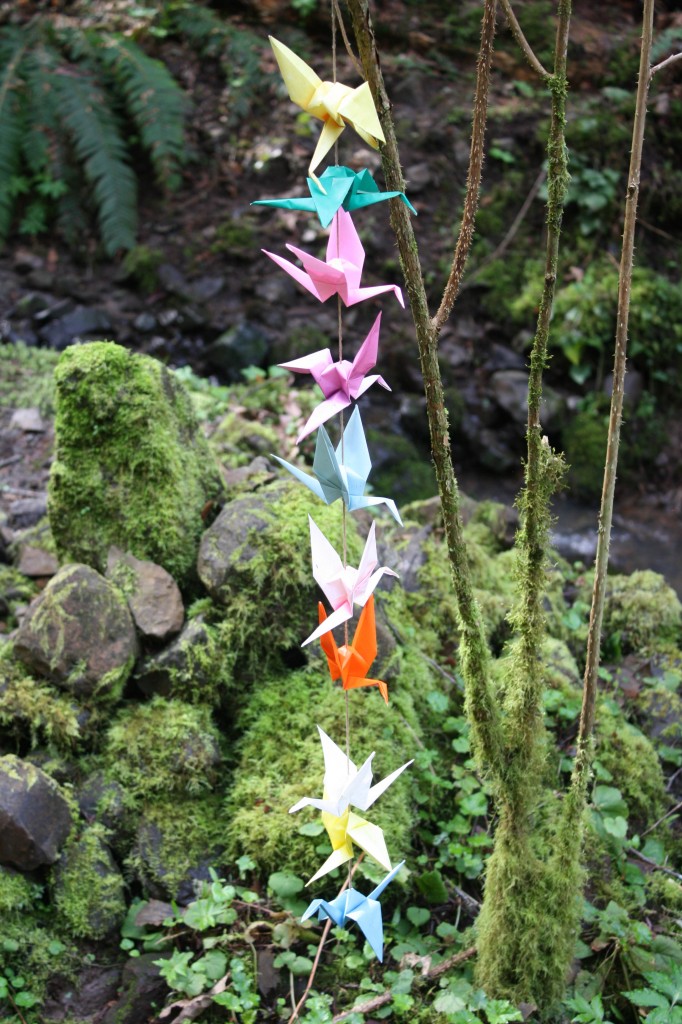 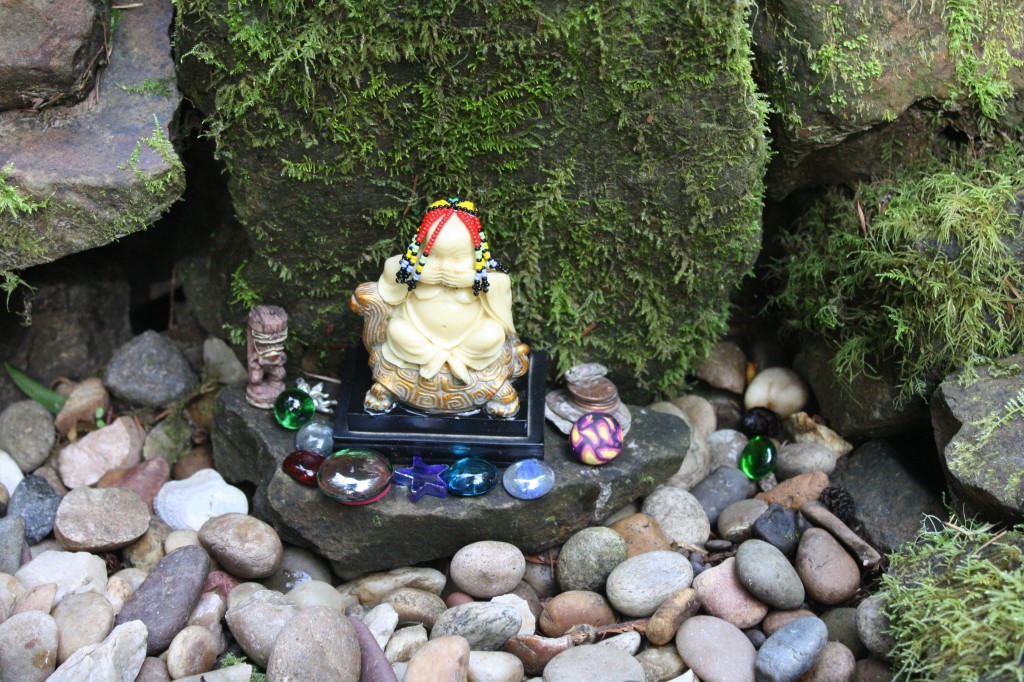 It was cool to see the little altar and origami! It was next to the babbling creek that we’d heard for about 3/4 of a mile but couldn’t see until the trail headed downhill. 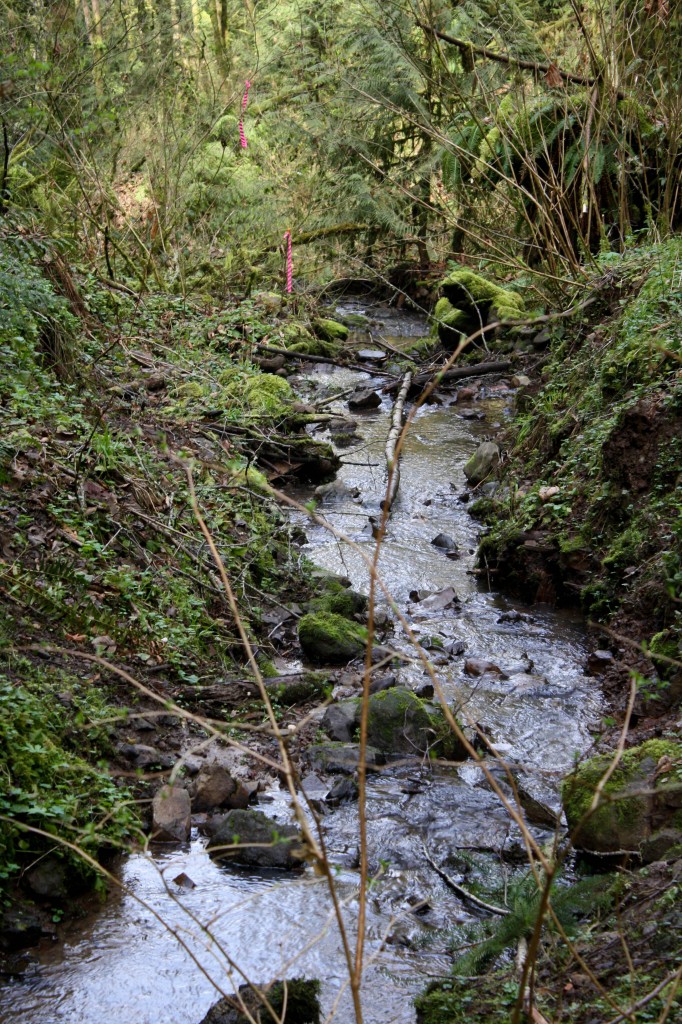 The trail was pretty sheltered from the forest but there were several breaks in the trees where we could see blue skies and the sun beat down on us. I’d dressed for a cold day hike and was pleasantly surprised that the sun was so warm! There were spring flowers blooming among the ferns and we saw some slugs and some other forest creatures: 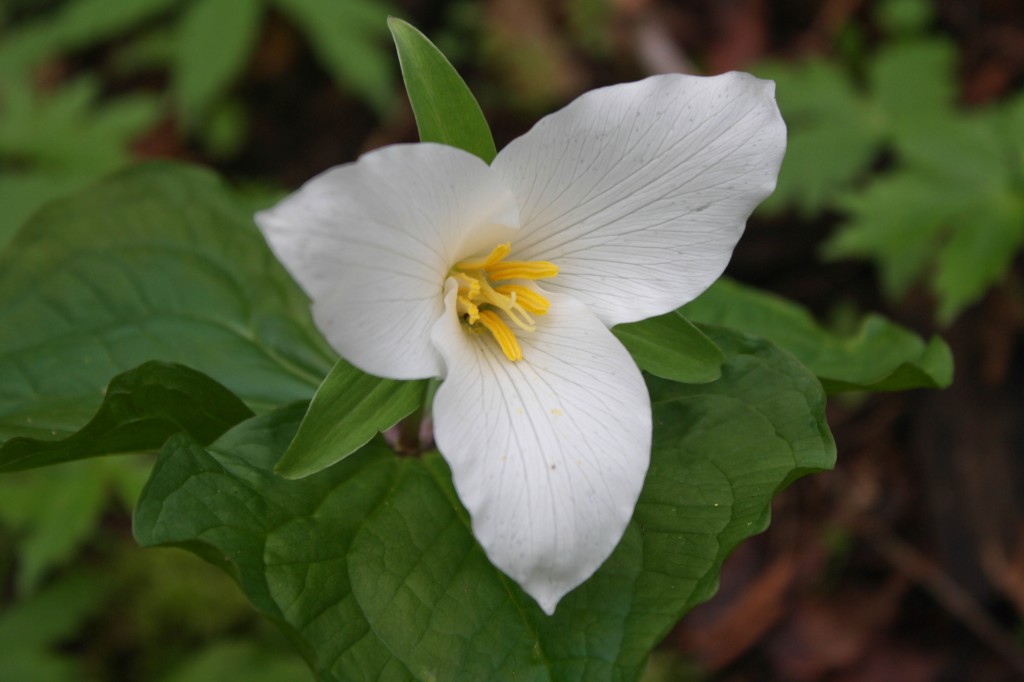 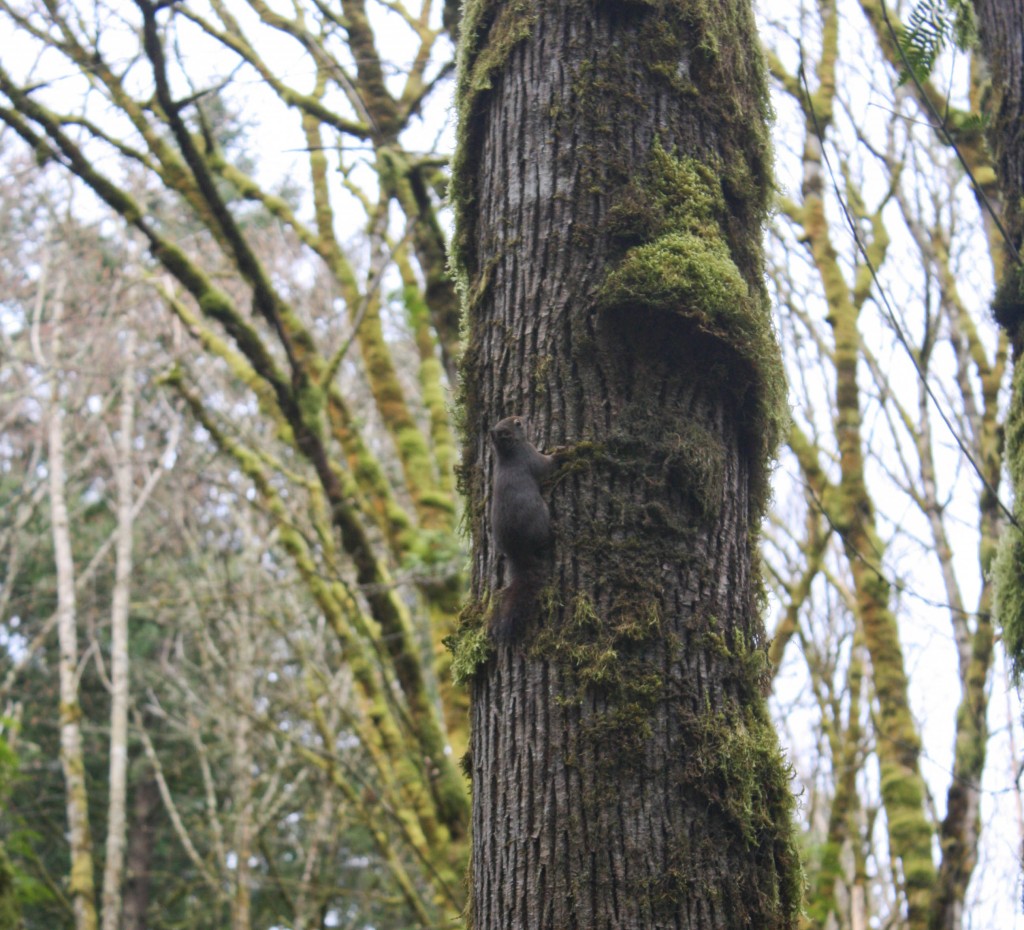 After the creek we came to  fork in the road. The trail split to Firelane 12 or Firelane 15. I wasn’t sure if the trails connected anywhere further down the path. We decided to take Firelane 15 because it wrapped around the creek and then the trail went back up and it looked like there was sunshine on that route. 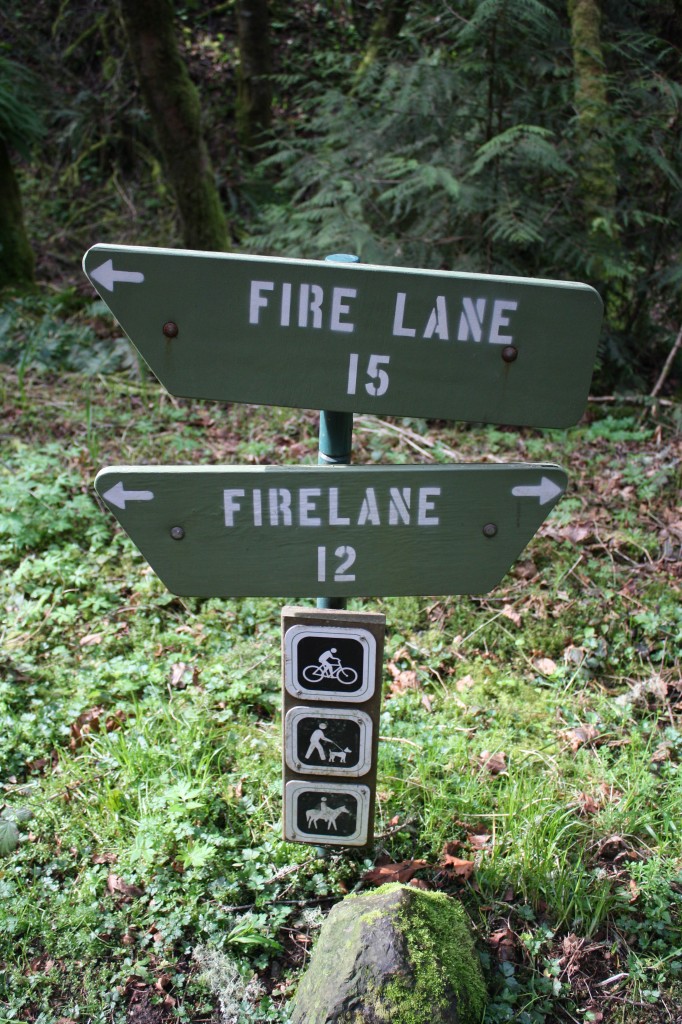 We stopped here for a water break for us and Bella. Firelane 15 was ALL uphill. We wrapped around the side of the hill and then there was another break in the trees. About 1/4 mile later we came to another fork in the road. The fire roads connected to the Wildwood Trail that is one of the most popular trails in Forest Park. It might also be super long because we were at least 10-15 miles away from Hoyt Arboretum where Wildwood starts. 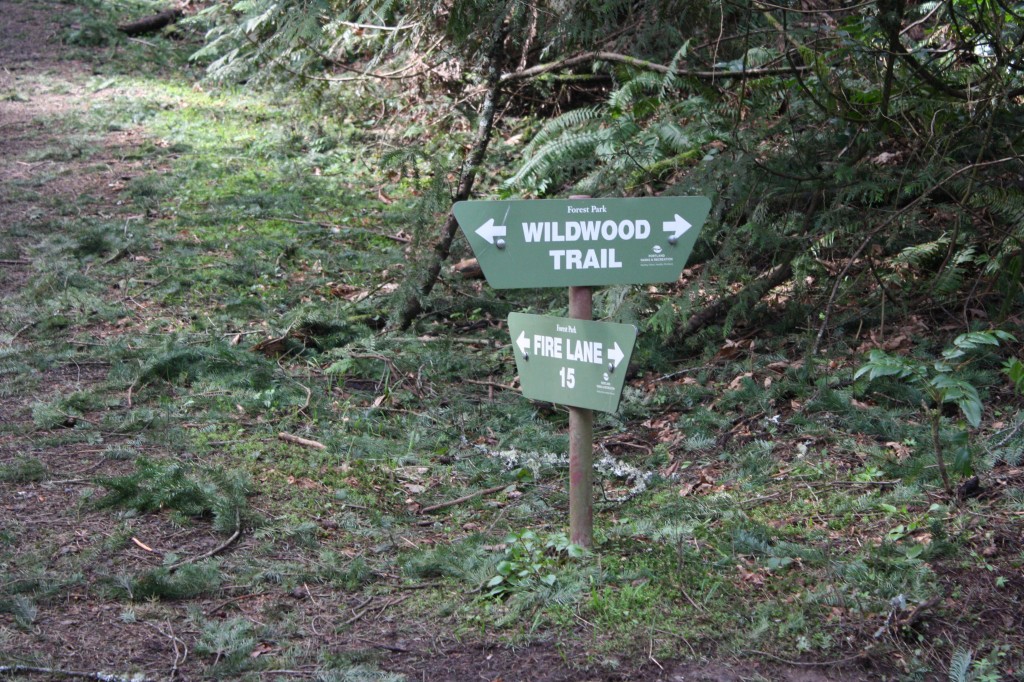 There was also a map of Forest Park trails but after much investigation and debate, we still couldn’t figure out if 15 connected to 12 in a loop. We decided to turn around and go back the same way we came. That was a good decision. 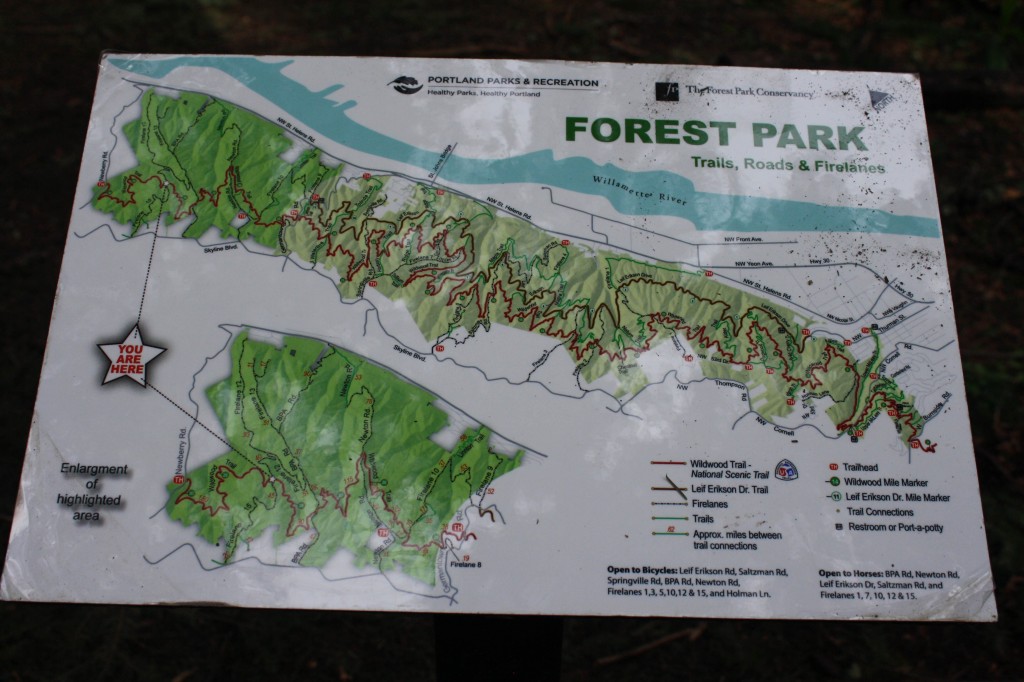 We headed back down the trail which was very much downhill. I was worried about my knees and whether they would be ok. It’s the downhill that kills them. But I did ok. No issues during the hike, no issues after the hike. It was all good! We got back to the car and tried to clean Bella off. She was COVERED in mud. 😛 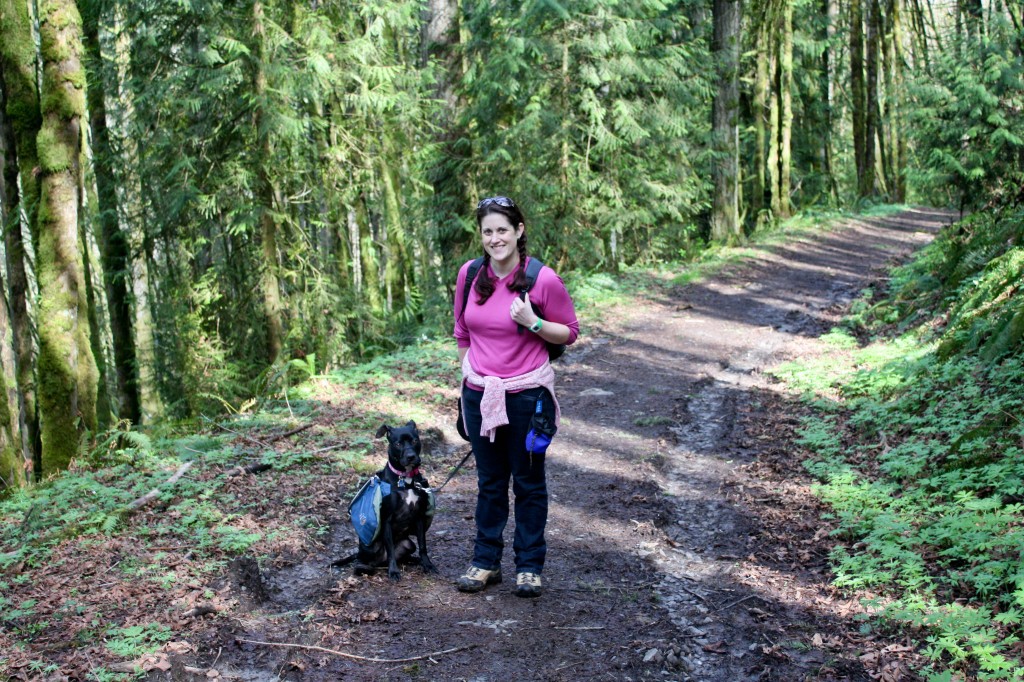 We ended up hiking 3.05 miles in 90 minutes. It was a great little hike, got our heart rates up and our quads burning a little bit. Here is my calorie burn for the hike: 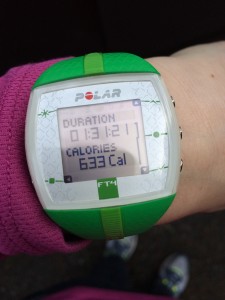