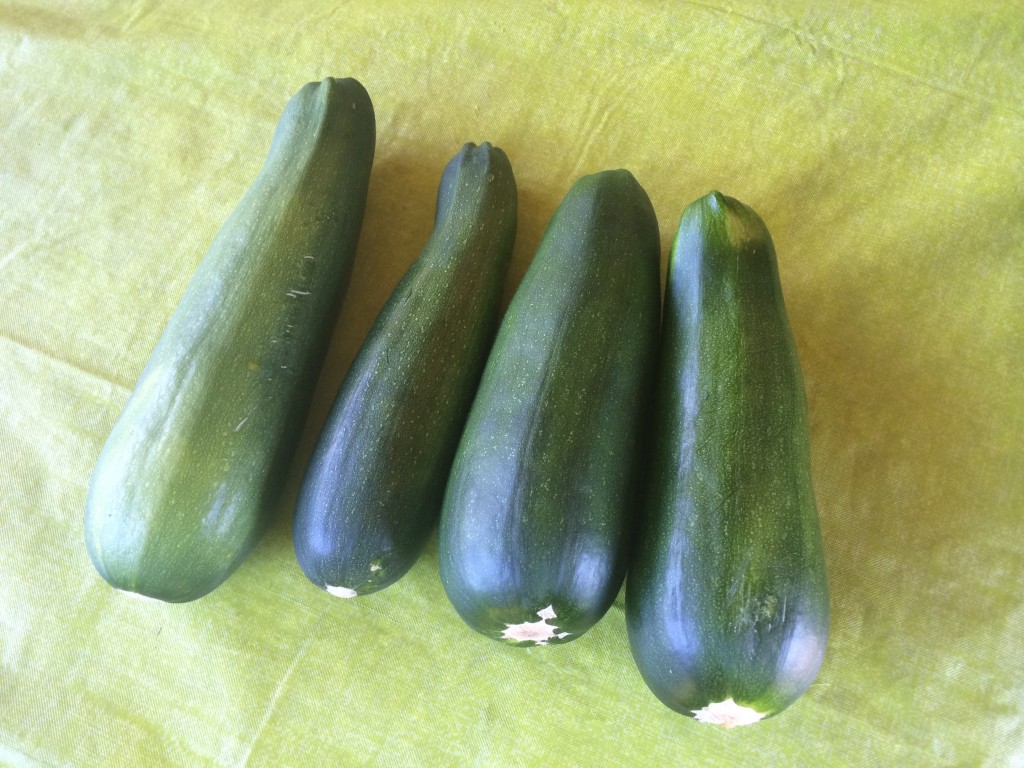 Seriously, it’s coming out of our ears. SO MUCH ZUCCHINI. The plant has taken over the raised bed and every day there is more zucchini. I guess the heat wave we had recently made our plant flourish. I needed some creative ways to eat the zucchini. With so much, just having it as a side dish with every dinner gets old quick. By the end of summer I plan on shredding a bunch of zucchini and freezing it like I did two summers ago. It was nice being able to make zucchini bread in the winter.

This was the first recipe I tried. I went off this recipe from Skinny Taste, Sausage Stuffed Zucchini Boats, but really just used it as cooking instructions. At some point I will try the actual recipe because it sounds delicious. But I had some leftover cooked ground beef and onions and homemade spaghetti sauce that I just mixed together and used for this recipe. It made it a quick and easy meal.

I cut the zucchini and used a spoon to scoop out some of the seeds and innards. Then I boiled the zucchini for about 2 minutes. 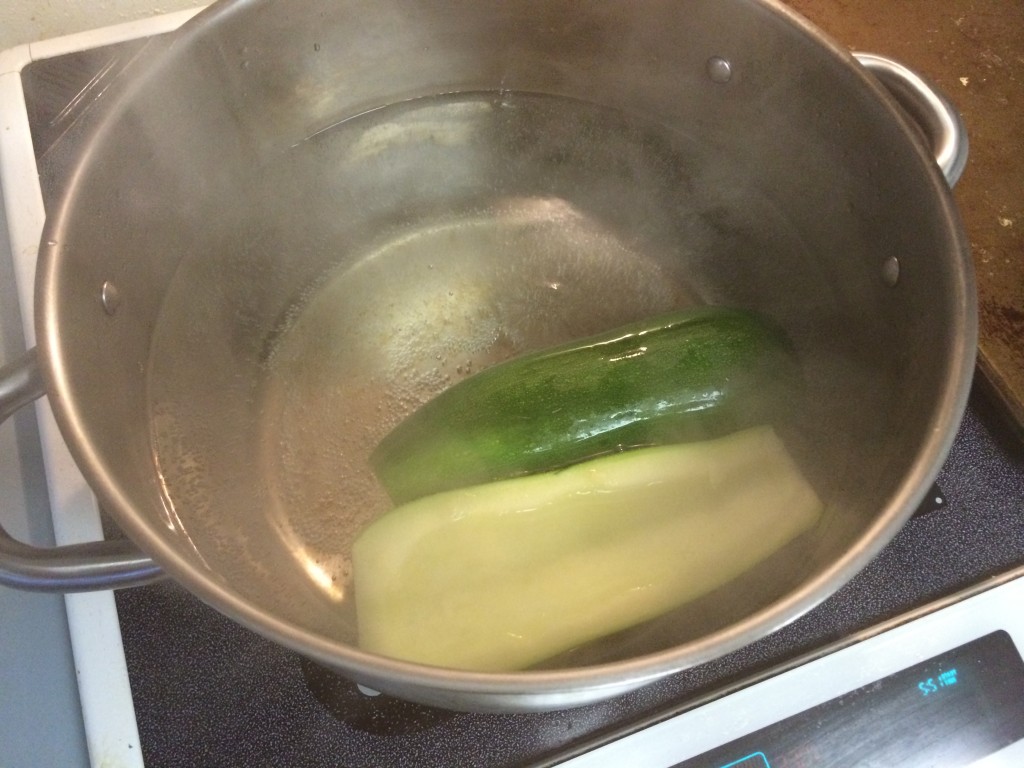 In a bowl I mixed together the spaghetti sauce, beef and onions. I added a little bit of salt and pepper to it and then put the meat in the zucchini “boat.” I topped the meat with shredded Colby Jack cheese (it was all we had). I baked them at about 425 degrees for 30 minutes. 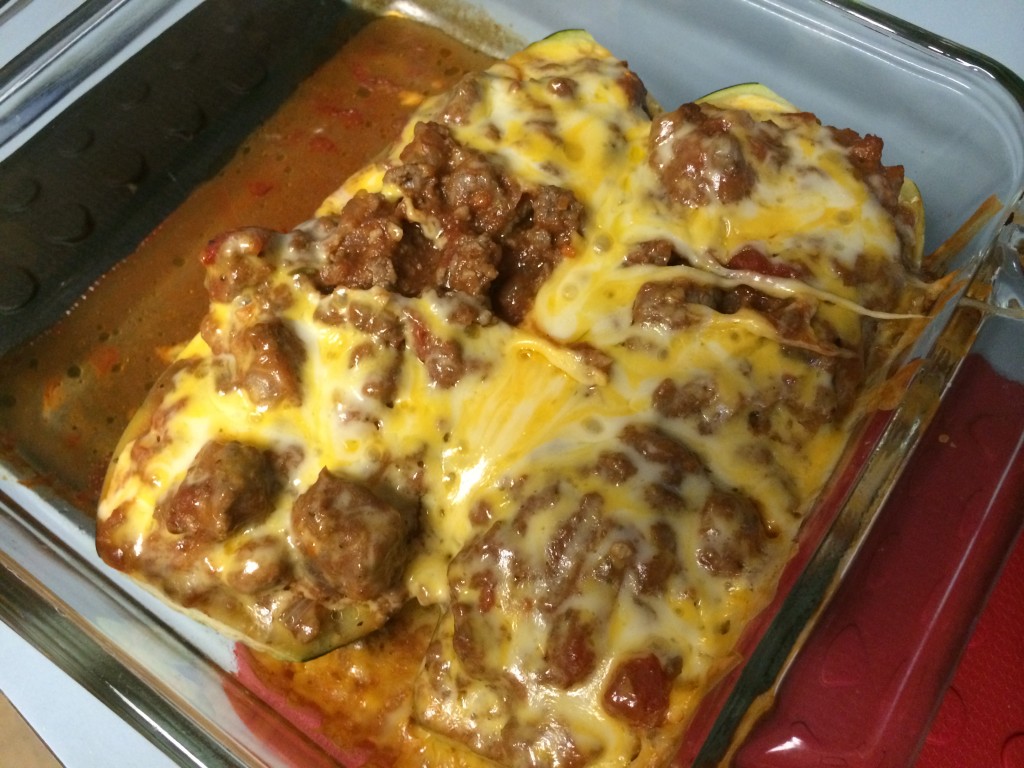 Michael and I split one large zucchini for dinner and it was plenty of food. It was so filling and I love that it was low in carbs. We both agreed that it definitely needed some spice to it. Next time I’ll add some red pepper flakes or maybe use spicy ground sausage instead of beef. 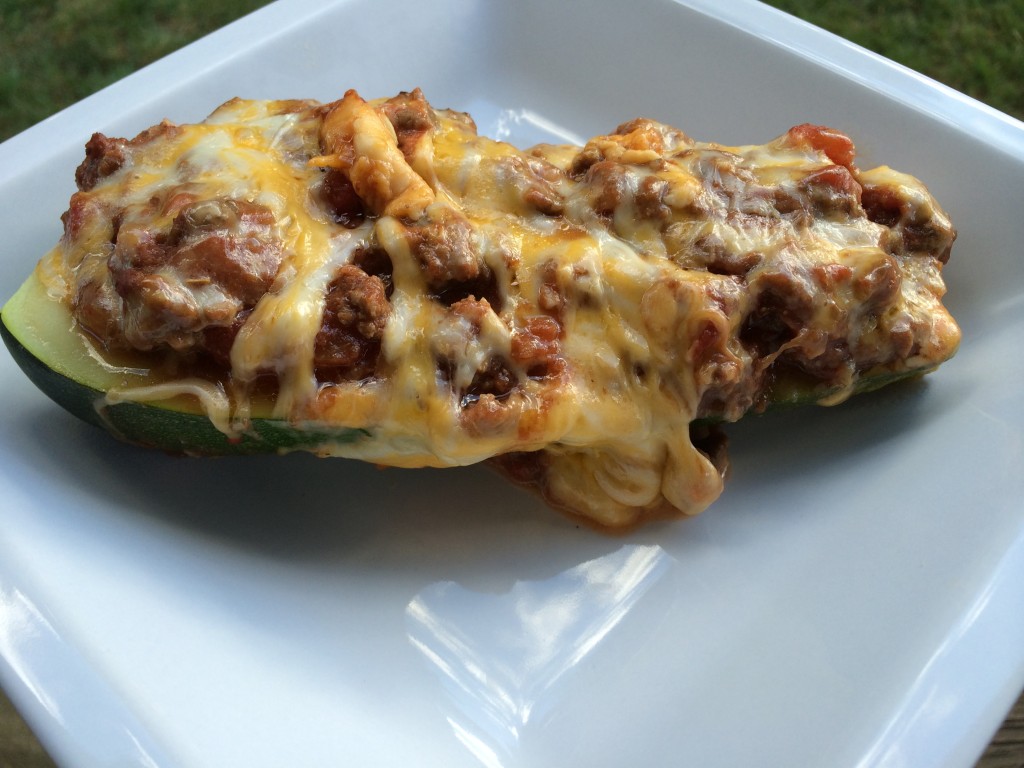 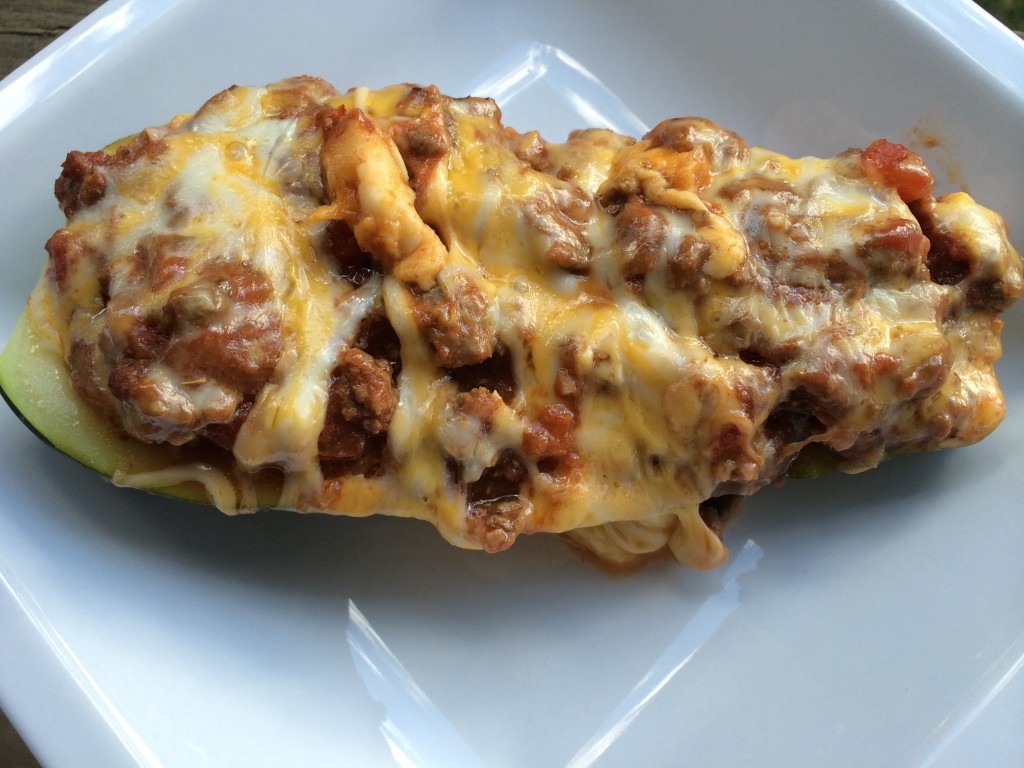 Yum! Yum! Love the concept of this recipe and will definitely try it again.

I’ve done a couple other dishes using zucchini, but not really using a recipe. One of my favorites was gnocchi topped with homemade spaghetti sauce and sauteed zucchini. I love the combination and it was really delicious and filling!

I used this recipe for zucchini bread. Even though it was low in sugar, it was still a little high for my liking. I reduced the amount by using 1/2 a cup of Splenda and 1/2 a cup of unsweetened applesauce. By doing that I reduced the calories per serving by over 100 calories. I also used Trader Joe’s Gluten Free flour.

The batter was a little on the soupy side and I was a little worried but it turned out great! I baked them in my mini loaf pan (which I absolutely love) for about 35 minutes and pulled them out. I was really surprised at how light and fluffy the loaves were considering they were gluten free. Usually gluten free baking is really dense and just not great… 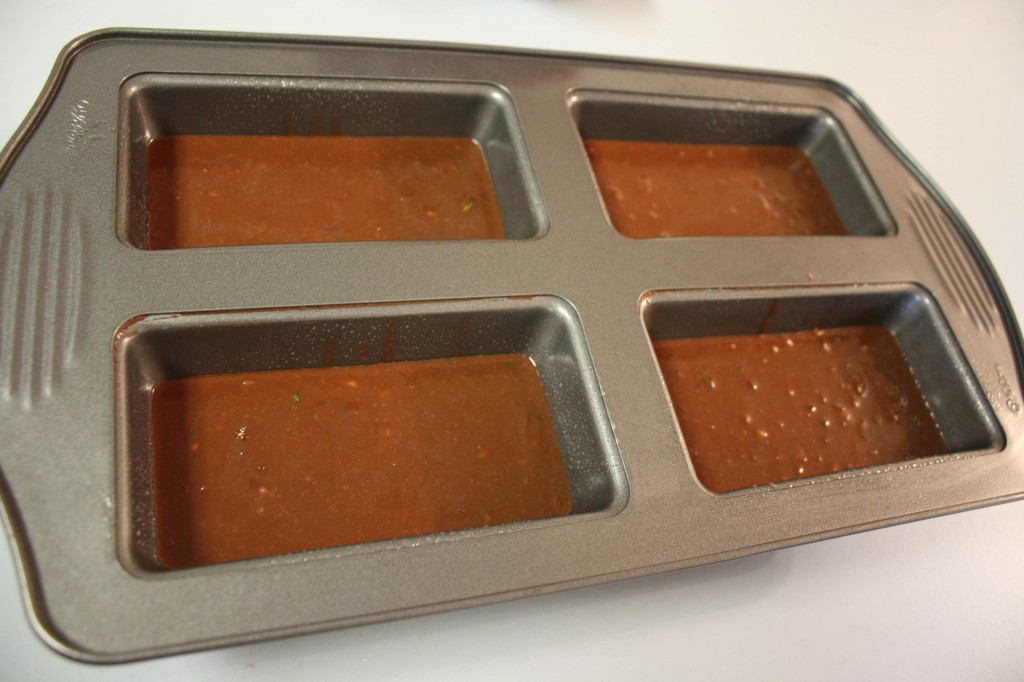 This recipe was great! Michael had it for breakfast a few times, it worked great for that because it wasn’t overly sweet. I had skipped the nuts and I think next time I will add some. The bread needed a little bit of texture to it. 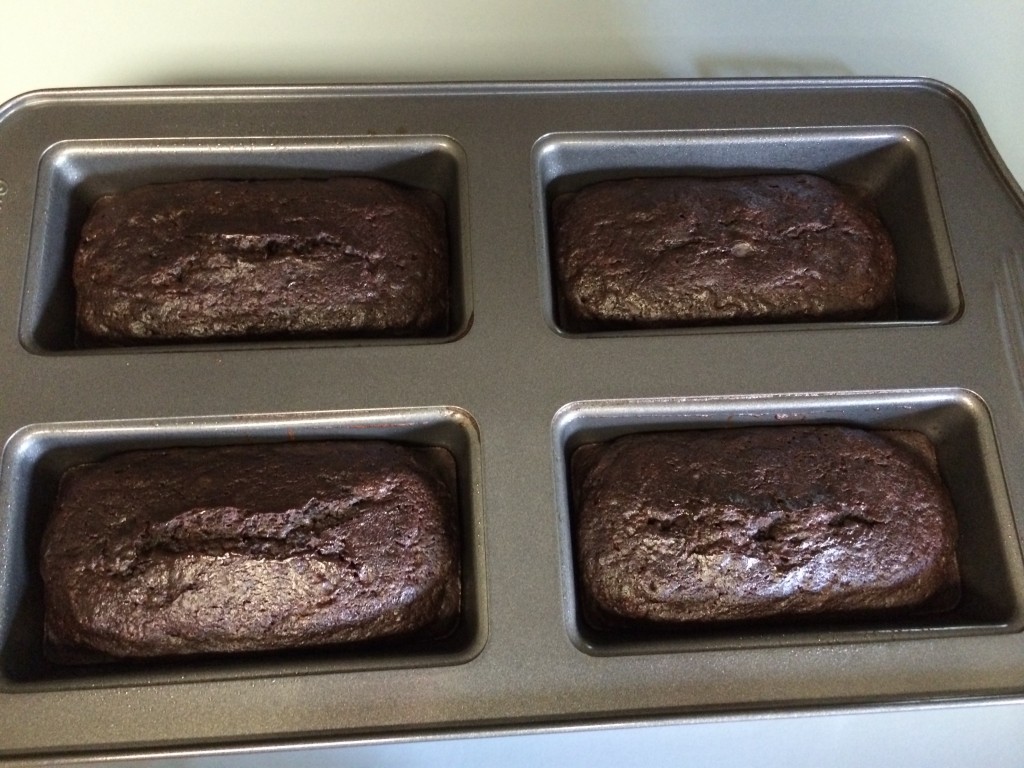 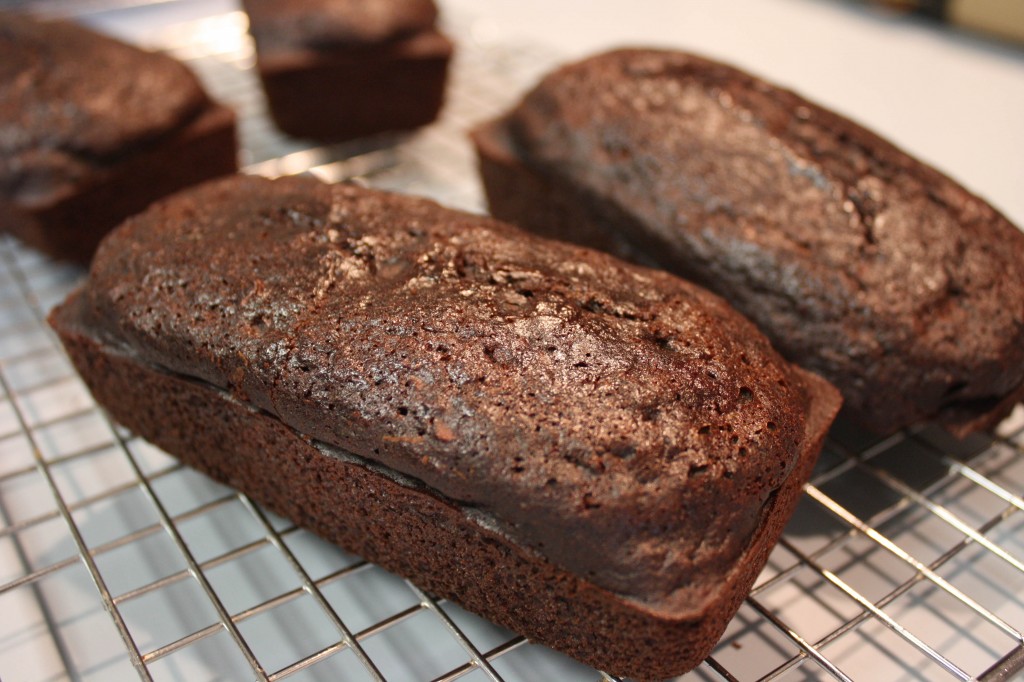 I was impressed with the subtle flavor and the airy texture. I would definitely make this recipe again and it was a great use of zucchini! I might even add a little more zucchini than the recipe calls for. With my alterations and using the mini loaf pan, I estimated about 18 servings…so that makes the calories around 129 per serving.

Do you have a tried and true recipe to use up zucchini? Pass it on to me!

13 thoughts on “Zucchini Coming Out of My Ears!!”