Saturday afternoon was spent shopping and meandering around the town. It was another nice day of not doing much  (or better said: not having something planned). First, we went to IKEA to wander around and look at stuff for the house. We got some toys for friends who just had a baby (and another couple who is expecting a baby). We also bought a new lamp for the living room. It was hard, but I was able to resist this little delicacy: 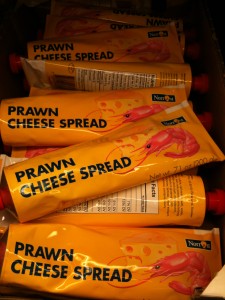 Prawn Cheese Spread? YUCK!!!! 🙂 I don’t even know what you’d do with something like that!

We went to a few other stores and then ended up at the fancy new market by our house. New Seasons is sort of like Whole Foods–but cheaper. 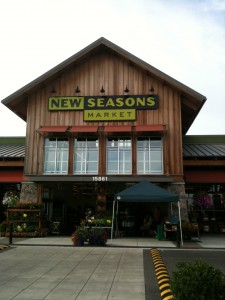 We spent way too much money on stuff we probably didn’t need. But sometimes that’s fun. The New Seasons had a deli, salad bar, and even a BAGEL bar! Yum. Each department had samples, too. I have to admit, I sampled everything I think. 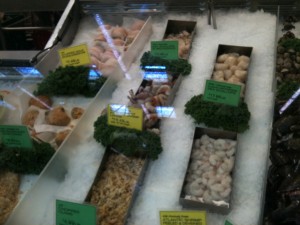 We did go into the store with a few things in mind though. We were going to get seafood for dinner. They had scallops and fresh clams that looked really good. But as soon as Michael saw the Ahi Tuna on sale, he wanted that. 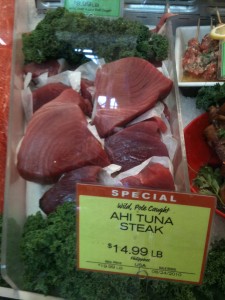 I wanted crab cakes, so we got two of those too. Unfortunately, after we got the tuna and crab cakes, we walked by an entire section of Kabobs. As Michael put it, I’d been craving “meat on a stick” for some time now. 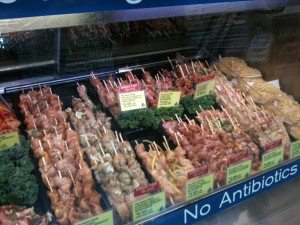 It was a hard decision because there were so many yummy sounding choices! We agreed to get two Rosemary and Garlic Beef Kabobs to have for dinner another night too. We got a bunch of other stuff we definitely didn’t need, and of course, checked out their beer selection. This one make me laugh: 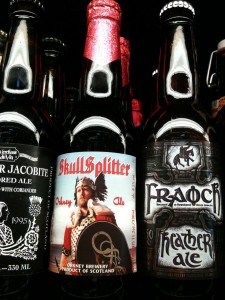 Skull Splitter beer? With a Viking on it? LOL Too funny! I passed up buying one thought because I’m really looking forward to having some of my Quenett wine. 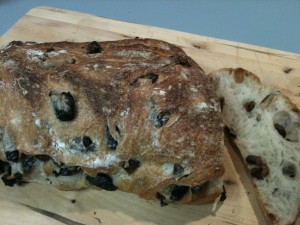 I will admit, we ate half the loaf between us. Oh well.  I had calories to burn and I was famished! 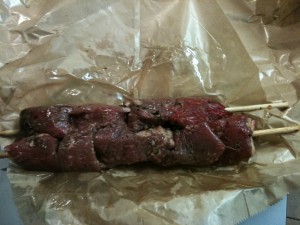 Michael was in charge of grilling the beef kabobs while I made us salads. The second he unwrapped the packaging from the kabobs we both sighed in ecstasy because the aroma of rosemary and garlic was so heavenly! 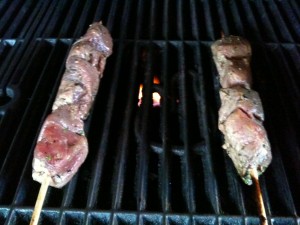 I think he grilled the kabobs for about 6 or 7 minutes. 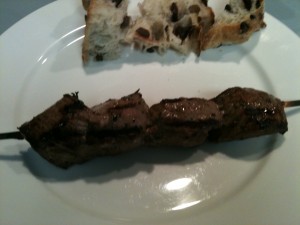 The meat was so tender it practically melted off the stick. The flavor was excellent. I want to recreate this on our own. I think it will be pretty easy too, just need the right stuff to marinade it in. To go with the beef, I poured the last of the Quenett Red Redd Wine. 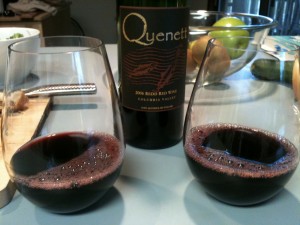 Everything about dinner was delicious. I was unsure if one kabob each was enough food but it was plenty. Next time we try to make it ourselves, I want to include lots of veggies on the kabob. 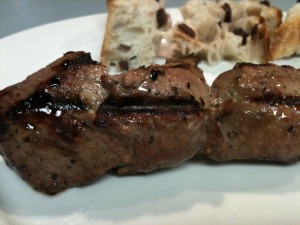 The yummy dinner was finished off with CHOCOLATE while we watched a few episodes of Mad Men! 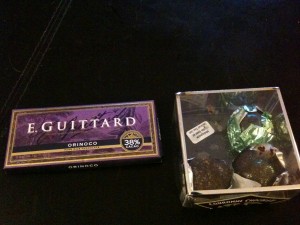 My fancy truffles are gone now. 🙁

QUESTION: What is your favorite thing to cook on the grill? And do you have a special Kabob recipe you like?