Monday was a Rest Day for me–I needed it. My left calf felt tight and it’s been bothering me for about a week now. My hope is that rest and maybe some yoga will improve that.

When I got home from work I dyed my hair and then Michael and I went out to dinner before seeing a movie. We went to Panera. It was conveniently near the theatre and they have tons of low calorie options. 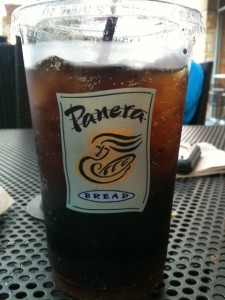 There are so many things I can order at Panera. And they post the calorie count on the menu board. I ordered the soup/half sandwich combo. I got the French Onion soup: 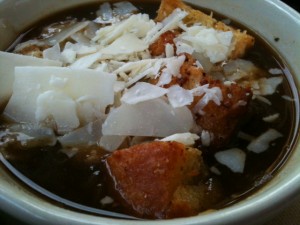 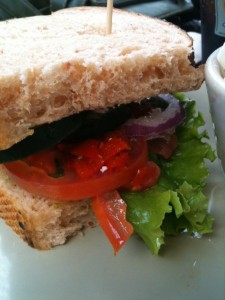 The sandwich was kind of…weird. The tomato basil bread was really sweet. I wasn’t expecting that. There wasn’t much feta or hummus on it either. But it was an okay sandwich. 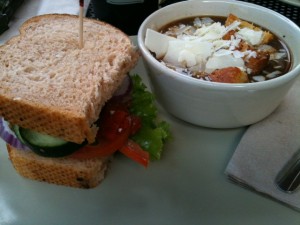 The French Onion soup is decent. It’s nothing compared to the best French Onion Soup I’ve ever had. Dinner was about 650 calories. I like that number!

We sat outside in the bistro area and tried to enjoy the very little sunshine we had. Poor Michael–wearing a huge sweatshirt in the middle of July! Ridiculous weather. 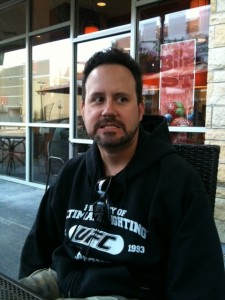 After dinner we went to see “Super 8.” I won’t give anything away. But I will say a few things: I enjoyed the movie a lot, even though the ending kind of fell short of the build-up. 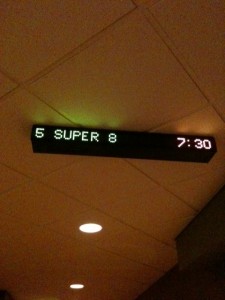 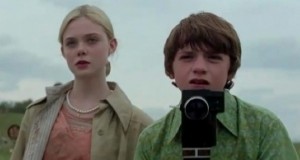 The movie is worth a theatre viewing. I think the effects would be lost seeing it at home. There were two previews for upcoming summer movies I’m looking forward to as well. The first is Captain America. I am slowly starting to really enjoy the comic book movies. The second movie is Cowboys and Aliens–could be totally awesome or a total cheese-fest of awfulness.

QUESTION: What did you think of Super 8 (no spoilers)? What summer movie are you looking forward to seeing?