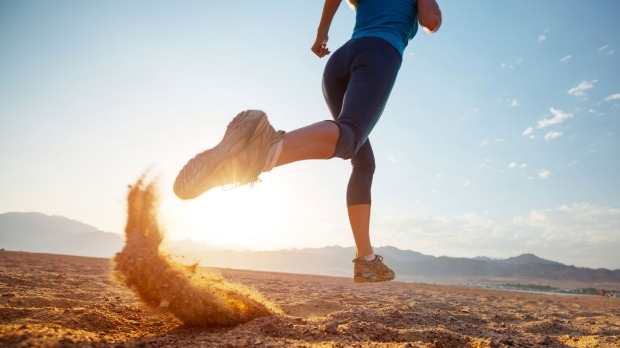 I am so glad I am back to being able to run on a regular basis! I LOVE it. Swimming is my #1 happy place–that is where I feel the most relaxed and happy but running is a close second. Running makes me feel strong, powerful, and happy. It boosts my mood. It reduces my stress level. It helps me manage my anxiety. It really is the best thing for healthy living, in my opinion.

Recently there was some guy on twitter, I can’t remember who–I think he was a professional runner or coach–who said that if you weren’t running less than a 10 minute mile, you weren’t a runner. There was a huge backlash, rightly so, and I hate to admit that his asinine comment has stuck with me since I read it.

I was very offended by that comment. I’ve never been a fast runner. Back in the day when I was about 20 pounds lighter and 10 years younger, I was running between a 9.5-10 minute mile and I felt pretty good. Then I had a series of running injuries. THEN I had a baby. 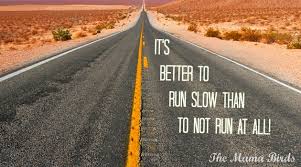 I was slow getting back to running after having Logan. I was working on strengthening my core and my pelvic floor. I was sleep deprived. I was breastfeeding…so I started slow. I’d go for long walks with Logan in the stroller and eventually I’d start jogging intervals. Eventually I built it back up.

But guess what? I’m still slow. I’m REALLY slow by most people’s standards. I take walk breaks. I don’t push myself to over-exert myself. WHY? Because I would rather be a SLOW RUNNER than an INJURED RUNNER who can’t run.

There are a lot of challenges with being a runner. One of them should NOT be the offensive, negative comments of “elite runners” judging us slow runners.

Anyway, I currently run twice a week during my lunch break at work. I’m back to running the waterfront loop in downtown Portland, which is around 3-3.5 miles long. If the weather is crappy, I use the treadmill. Not my favorite but it’s better than nothing. Right now I am sticking with twice a week but maybe by the end of summer with try 3 days a week.

Does it matter? Like I stated above, is it THAT important to be fast? Or is it more important to just being able to do it at all?

One of the things I’ve noticed most about when I’m feeling extra slow, I look to my diet. When I was trying to limit the amount of carbs I ate to lose some weight, my runs were AWFUL. I was slow and tired and lethargic. My legs felt like lead. But I’d eat carbs and have a better run.

I would cross-train before I even knew it was a word. I think it’s really important for your body to do DIFFERENT types of workouts and vary it up a lot. It’s especially important mentally, too. I don’t know about you but I get bored doing the same thing over and over.

My current routine is –

I switch things up according to schedule stuff and if the weather is nice, I will run outside. If it’s bad, treadmill. Also, in the summer we usually do a lot of hiking. We’ll see if we do that this summer!

I also think including weightlifting in your routine is really important. Don’t skip it and just do cardio! Lifting weights has made me stronger and healthier and has kept me from getting injured running. Rest days are crucial as well, and I also space out my runs. I never run two days in a row. Having at least one day in between my running has been very beneficial for me.

Sometimes running is really boring. Especially when you do the same routine all the time. Before I had my baby, I went to the gym after work and had a similar routine. One day I’d lift weights and the next day I’d run on the treadmill. After having Logan, I stopped going to the gym after work so I could spend time with him. Now I work out during my lunch break at work. It’s helped a lot and gives me more time for fun stuff after work plus it breaks up the work day!

The downside? I get bored doing the same thing. Running the water front is great, especially in summer! It’s sunny and warm and pretty. But the same route can be a snooze. So I switch it up each time. Since I do a loop, I go a different way each time. I’m basically doing the same run each time, but changing where I do it and I how I get to the waterfront. Sometimes I run on different bridges, or go a different direction. Whatever works to break up the routine.

Other tips are to run to a destination (which can be hard if you are on limited time), doing intervals, trail running, hill repeats, or run with a friend. I’m too slow right now to run with my friends, but I USED to run the waterfront with coworkers. It was fun! And they always pushed me to go a little faster than what I usually did.

The treadmill sucks. There’s no way around it. But sometimes that’s your only option. My suggestion? NETFLIX. 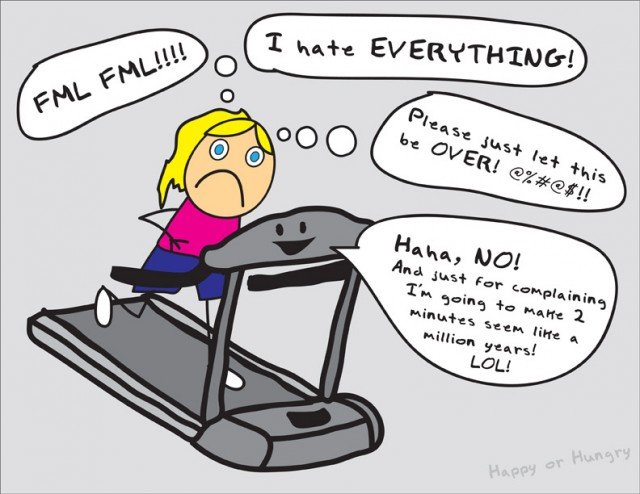 When I run on the treadmill during my lunch break I watch Netflix on my phone. I rarely have time to really watch TV these days, so it’s a nice thing! I recently watched the newest season of Bosch on Amazon Prime. I watched “The Five” on Netflix (outstanding!) and currently working through “Safe” (Dexter with a bad British accent but it’s pretty good). That’s really the only suggestion I have. Because the treadmill sucks.

QUESTION: What are some running challenges you face? Any other suggestions?

I didn’t know much I loved running until I couldn’t do it for awhile.

The last few months I’ve been running at the gym on the treadmill. I’ve been happy that I am back at it–happy like you wouldn’t believe–but it’s not quite the same as running outside.  What I missed about running was how much free time it gave me. For a long time I would get my runs in during my lunch break at work. It was nice, I got to run outside on the Esplanade Loop in the fresh air. I would run for just under an hour and have enough time to shower and clean up and be back at my desk to eat by the time my hour was up. It freed up my evenings. I was able to do more things, go out with friends, whatever I wanted really.

Sometimes the whole PROCESS of going to the gym feels like a drag. I have to drive there, find parking, change, etc etc. It just gets monotonous and tedious and it starts to feel like a drag. That’s how I’ve been feeling the last few weeks with this nice weather. I hate going to the gym when it’s sunny and warm outside! Biking to work once a week this month gave me a little of that freedom and outdoor activity I’d been craving. My recent flare-up made me take some time off, though.

Instead of biking last week, I decided I’d give running outside a try. My knees were ok but somehow I felt that if I’d tried biking that day they’d hurt. Would running hurt? Only one way to find out. I got home, changed, and headed outside. I went back to week 1 of the Couch to 5k program I was using because running outside is WAY different than a treadmill. I’m always sore in a different way when I run outside. 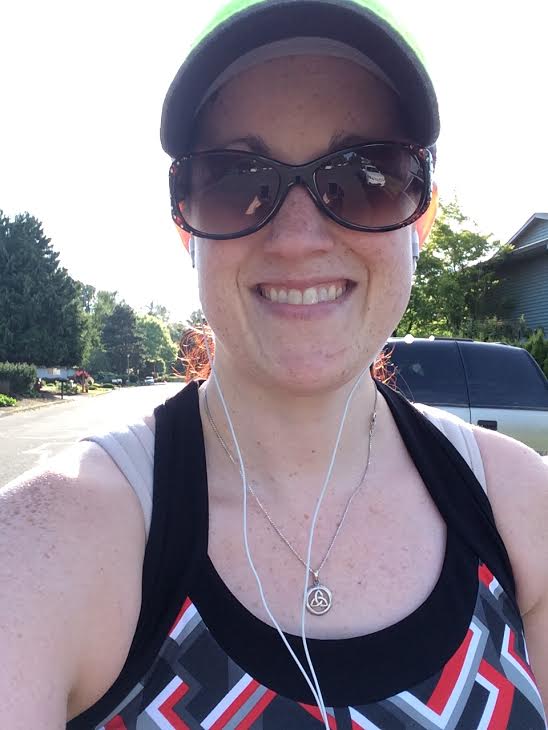 The C25K app starts with a 5 minute warm-up walk. That’s about how long it takes me to walk down the street to the school track in our neighborhood. I got down there and there were kids practicing lacrosse (which I’ve never actually ever seen in person). I followed the app’s prompts to run/walk at intervals. Because it was Week 1 I was running for around 1-1.5 minutes, then walking for a minute, and so on. It was a good start to running outside after weeks of the treadmill but there were times where it was a little too easy.

I did my intervals around the track, my knees feeling decent, the sun warming my bare skin, and then my time was up. There’s a 5 minute cool-down walk at the end of the app but I didn’t feel ready to cool down. Instead, I decided to take the long way back to the house and run it. 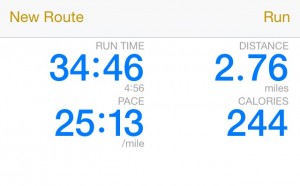 When I got back to the house I grabbed Bella (who had been very annoyed that I didn’t take her with me on my run!) and took her for a short walk as my cool-down. 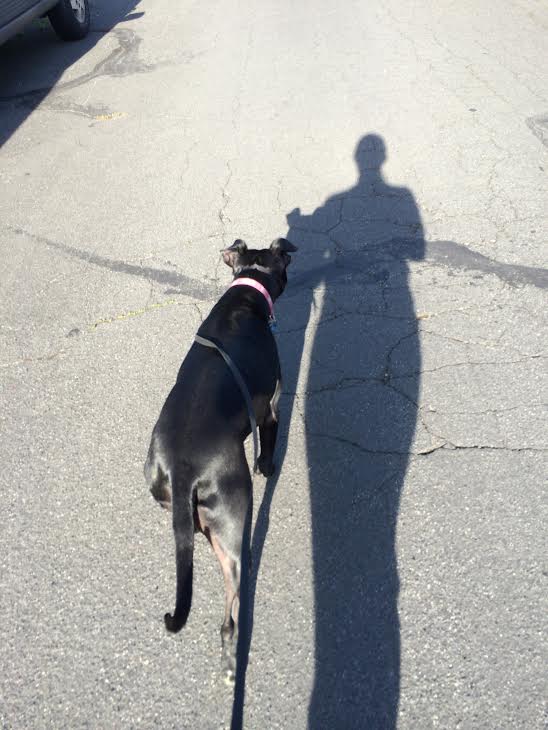 Bella was a little pull-y on the leash but she calmed down after a few minutes.  This was my cool-down/walk with Bella: 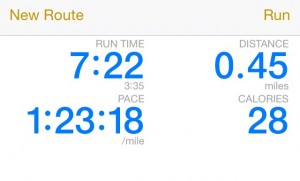 Another thing I love about running that just isn’t the same when you’re on the treadmill–the contemplative time. I like letting my mind wander when I run outside. I come up with all sorts of good ideas! I was so happy I go to run outside! YAY summer! I have to admit, though, while I was out there running and thinking about my 5k and started to hear that little voice putting pressure on myself not to walk any of it…I told myself I wouldn’t put that pressure on myself and even if I had to walk some of the 5k, it was still better than not being able to do it at all. Funny how that competitive streak comes out… 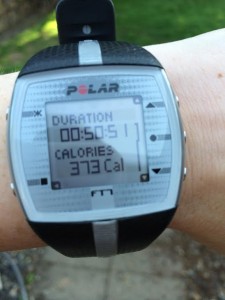 After my run, I stretched, I used my foam roller, I iced my knees (twice–once right after and then again before bed) and I also took a bath epsom salts. I recently discovered the kind for athletes and it works so great! It’s got rosemary and mint in it and it makes my sore muscles tingle and feel great. 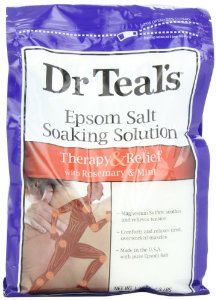 For dinner I had quinoa and Trader Joe’s Chicken Shu Mai dumplings with quinoa and a salad. Lots of sriracha on top. It was a filling dinner and around 500 calories. 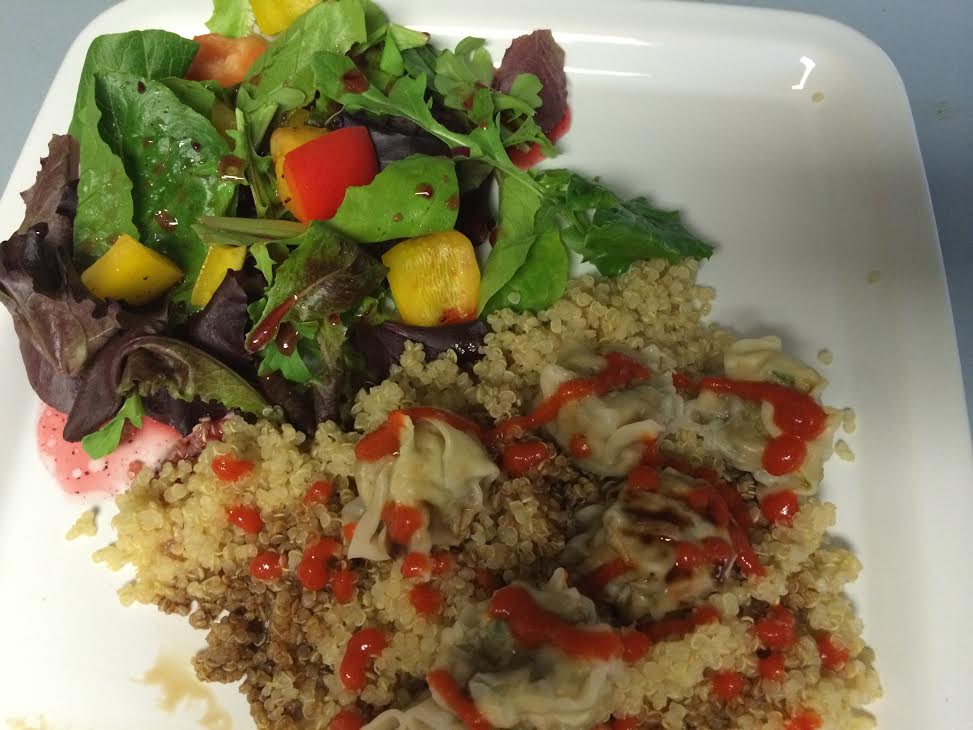 For dessert I tried something new and it was great! I got a box of chocolate covered frozen bananas from Trader Joe’s and they are amazing. For only 140 calories you get something sweet and it’s a good substitute for ice cream. I satisfied that ice cream craving with these babies. 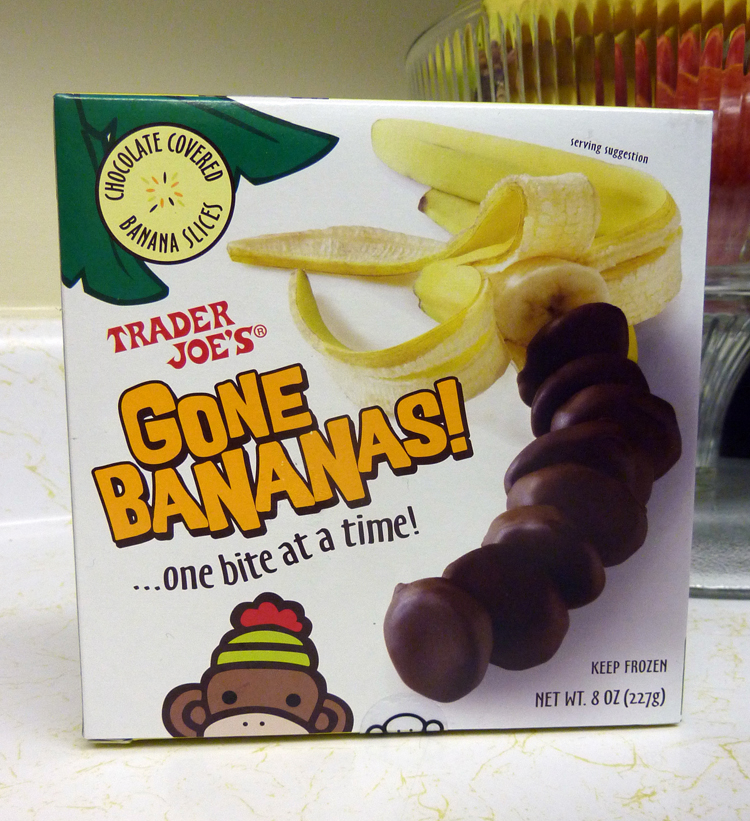 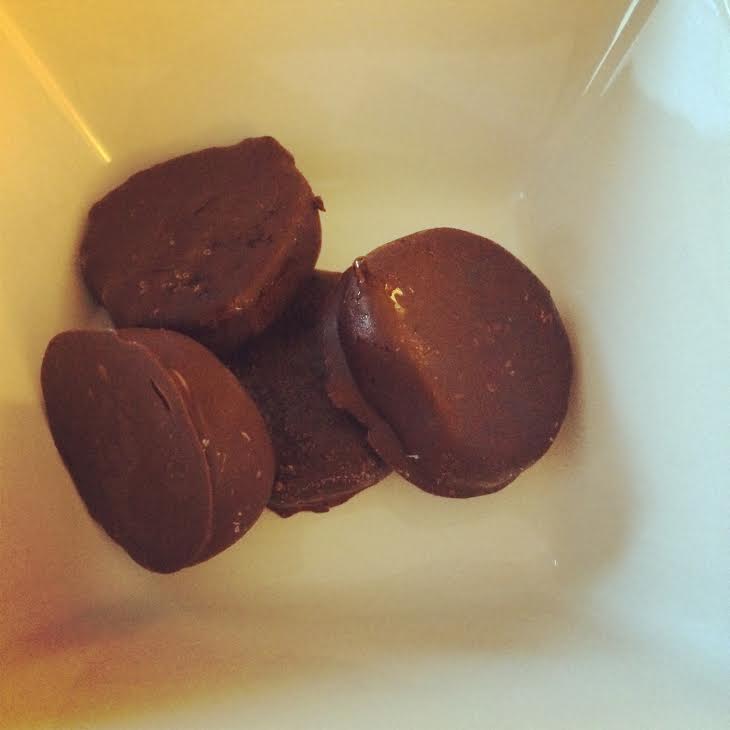 It’s just a bummer that there aren’t that many servings in the box. I can tell I need to stock the freezer with multiple boxes to have these treats on hand. 🙂

Back to the knees, they felt good. The next day my hips were really sore but my knees were ok so that’s all I care about! I also had a massage scheduled for that night. 🙂 My massage therapist spent a lot of time on my legs and hips and also did some stretches to help with my tight hips. It felt awesome!