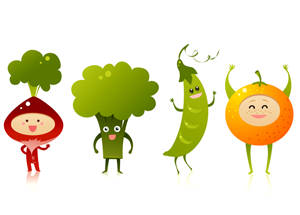 Lately I’ve been craving vegetables like crazy. I’ve always been a fan of veggies but for some reason I recently started craving them. I made a switch in my diet and started incorporating more veggies in my diet to satisfy that craving and I found that I was really enjoying roasted vegetables for lunch during the week. 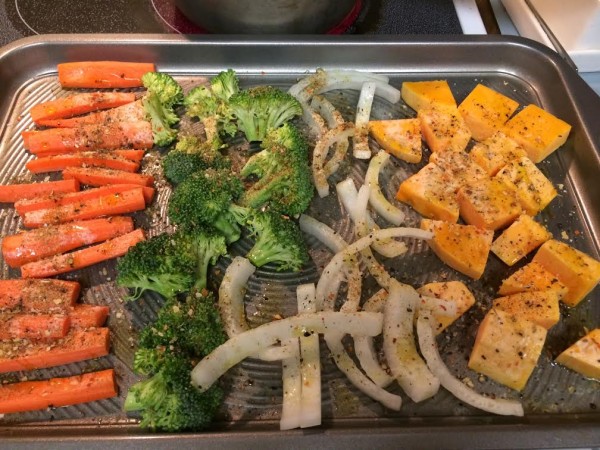 I’ve been rotating what I roast. For awhile I was doing carrots, onions, broccoli and pre-chopped butternut squash from Trader Joe’s. Then I did carrots, sweet potatoes, broccoli and onions. I don’t know why it took me so long to roast these babies. They are so good! I use a little bit of olive oil or the spray-on coconut oil from Trader Joe’s, then use salt, pepper and the Costco no-salt seasoning. That’s about it! And they come out delicious, perfectly cooked (although the sweet potatoes are often a little softer than the rest of the veggies).

This has been a base for my lunches at work lately. I love it! I tried it with some rice; for a few days I added some half a cooked spicy bratwurst (splitting one brat between two lunches); I also tried adding some cooked cubed chicken. All of those variations worked well and kept me fairly full for the rest of the afternoon.

One of the problems with the frozen meals (Lean Cuisines, etc) was that I would be hungry again in 1-2 hours after eating lunch. Then I’d start snacking on the candy at work. I was sabotaging myself by eating processed food that wasn’t filling, wasn’t enough calories and just made me hungry.

A tip that I learned a long time ago was to spend 1 hour doing food prep after grocery shopping. I am so glad I adopted this habit. I get home from the store and I take the time to chop the vegetables and on Sunday nights Michael and I cook up various meats (like pork sausage for breakfasts for the week, chicken breasts for lunches, etc). It makes it so much easier to make a good choice when looking to make something to eat quickly. 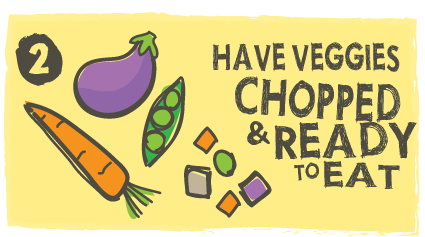 One night Michael and I went out for a date night dinner to Laughing Planet. It’s a great restaurant, especially if you have kids. They have tons of really healthy options, a rotating menu and they post the nutritional information for the meals. You also have the option to put your burrito in a bowl to make it low-carb. 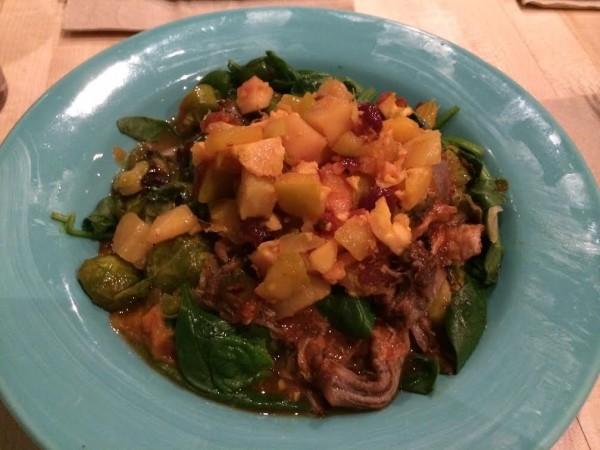 I ended up ordering the daily special. It was called the “Winter’s Bounty Bowl.” It was pulled pork with Korean BBQ sauce, spinach, roasted Brussels sprouts on top of a butternut squash puree. Then it was topped with an apple, ginger and mango relish. It was SO good! And it was really filling. I am totally going to try and recreate this recipe at home soon!

Back to lunches…I’ve been trying to look for some recipes and ideas for other lunch options. I’ve collected a few. Here is one:

I recently had the Thai carrot soup at Whole Foods from their soup/salad bar and it was OMG AMAZING. I immediately tried to find the recipe because I had to make it myself. I didn’t find one specifically from Whole Foods but I found a bunch of options and settled on this one to try first. It was super easy to make and didn’t have a ton of ingredients. The only thing I changed: I used the Light Coconut Milk instead of the full fat like the recipe said. It’s what I had on hand and honestly,  I didn’t want the extra calories from the full-fat version. 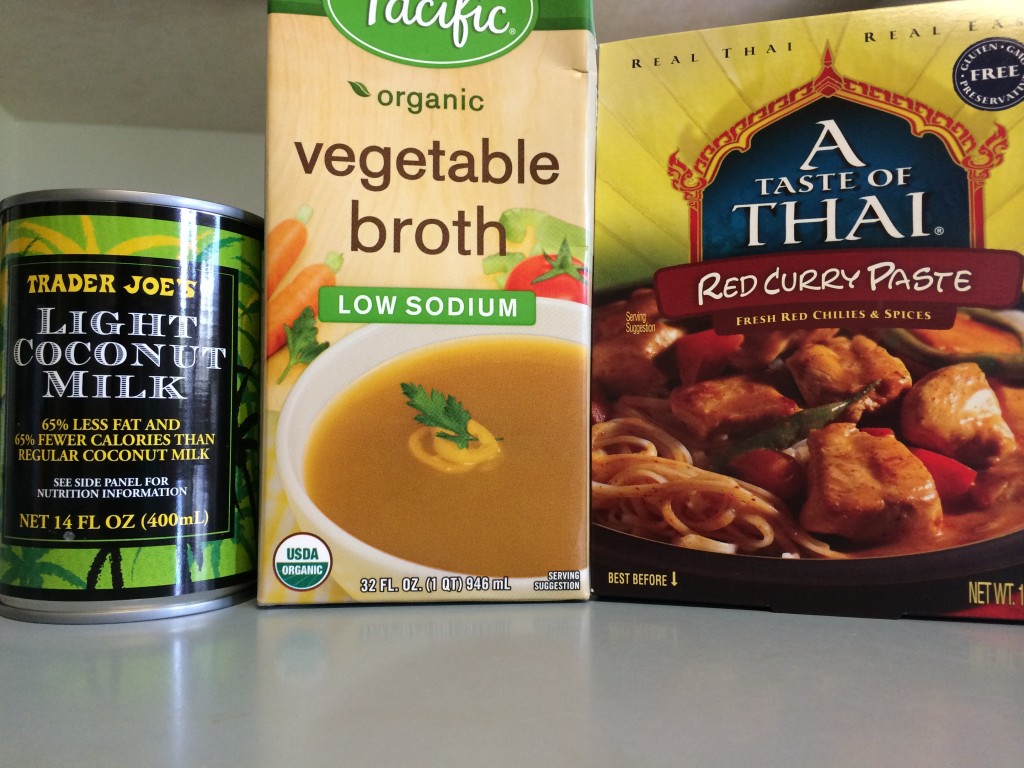 One thing I’ve learned making Asian dishes–never add extra salt. A lot of recipes call for a pinch or two of salt (sometimes more). But if you’re using jars of curry paste, or chili paste, or other Asian ingredients from a can/jar/package–IT ALREADY HAS SALT! And sometimes a lot of it. I learned that lesson the hard way and now I almost never add salt to recipes I make when using these ingredients. It’s just not necessary. 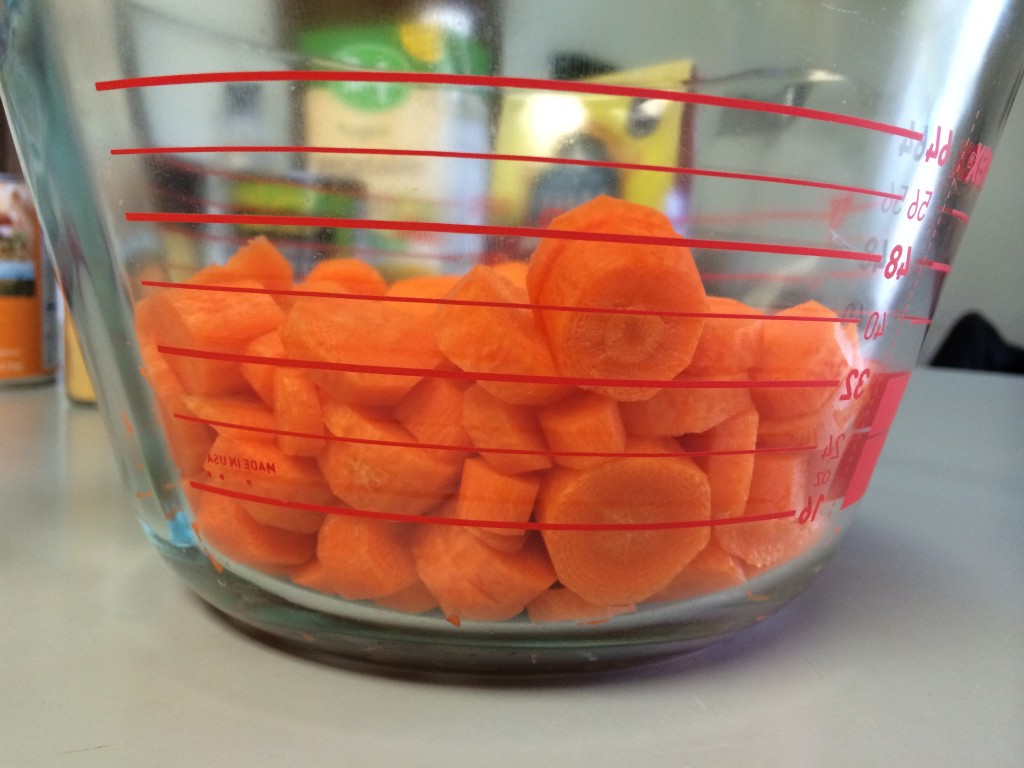 I cooked everything up and let it simmer for awhile and then used my immersion blender to get the soup creamy. I love that blender! It’s so easy to use and it works really well. Plus I don’t have to mess with pouring things into a blender and then spilling it all over the place. So much cleaner and easier. I blended up the carrot mixture until it was the consistency of baby food then I added the curry paste and coconut milk. 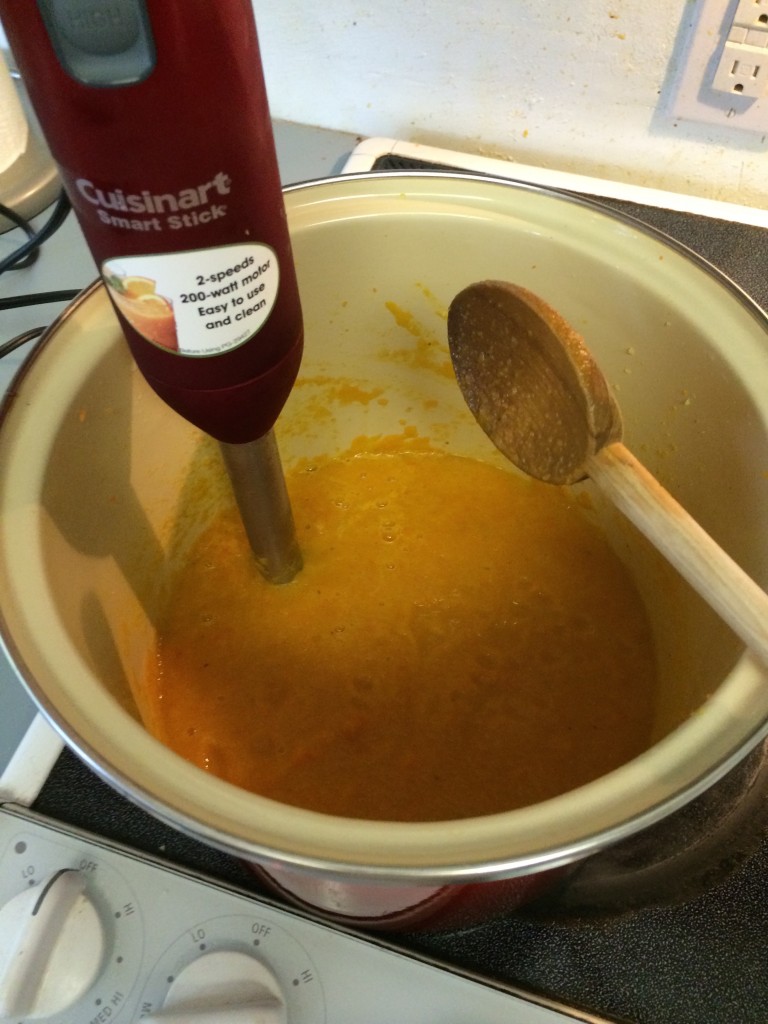 The one downside of the immersion blender–I did get splattered a few times when I used the fast speed. Ooops! After everything was all mixed in I let it simmer for 10 minutes and then tasted it. It needed a little something…I added a pinch of Splenda and then tasted it again. I added one more pinch of Splenda and then it was perfect. I hadn’t expected having to add sweetener because carrots are already so sweet but the soup was just a tad on the bitter side. The Splenda fixed that right up and the soup was perfect! 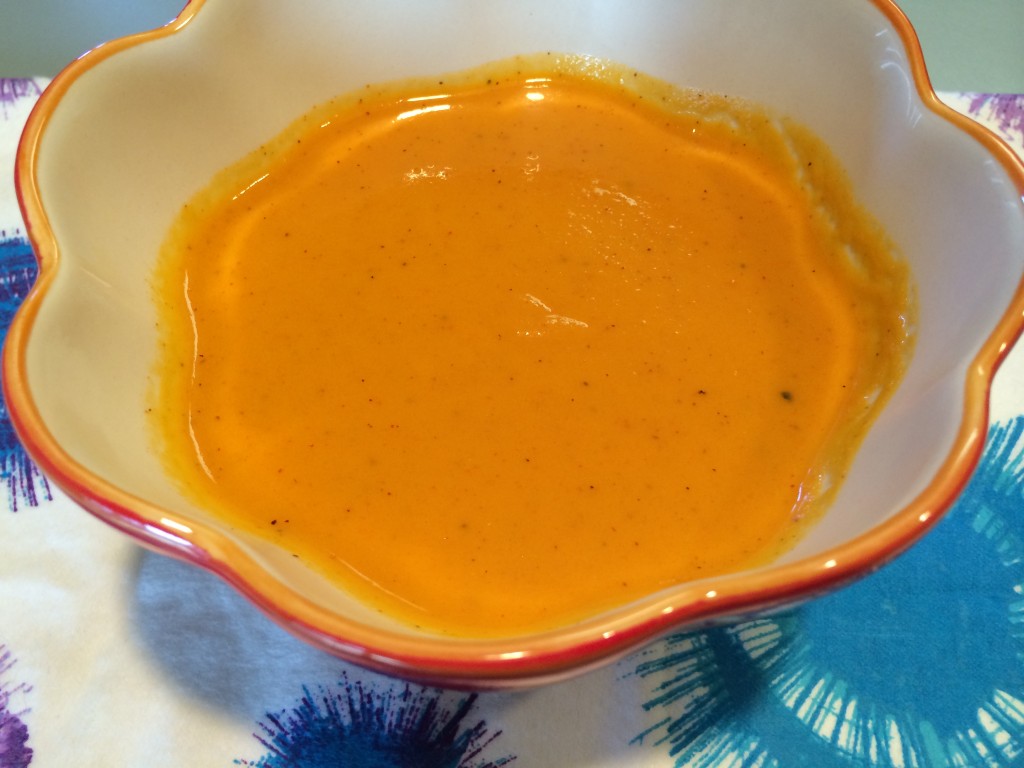 I got 5 GENEROUS servings out of this recipe instead of 4, which made the calories more like 165 calories instead of 200+. This could have easily been 6 servings for dinner–with maybe some crunchy French bread and a salad. The soup was creamy and the texture was perfect. It was also surprisingly spicy! 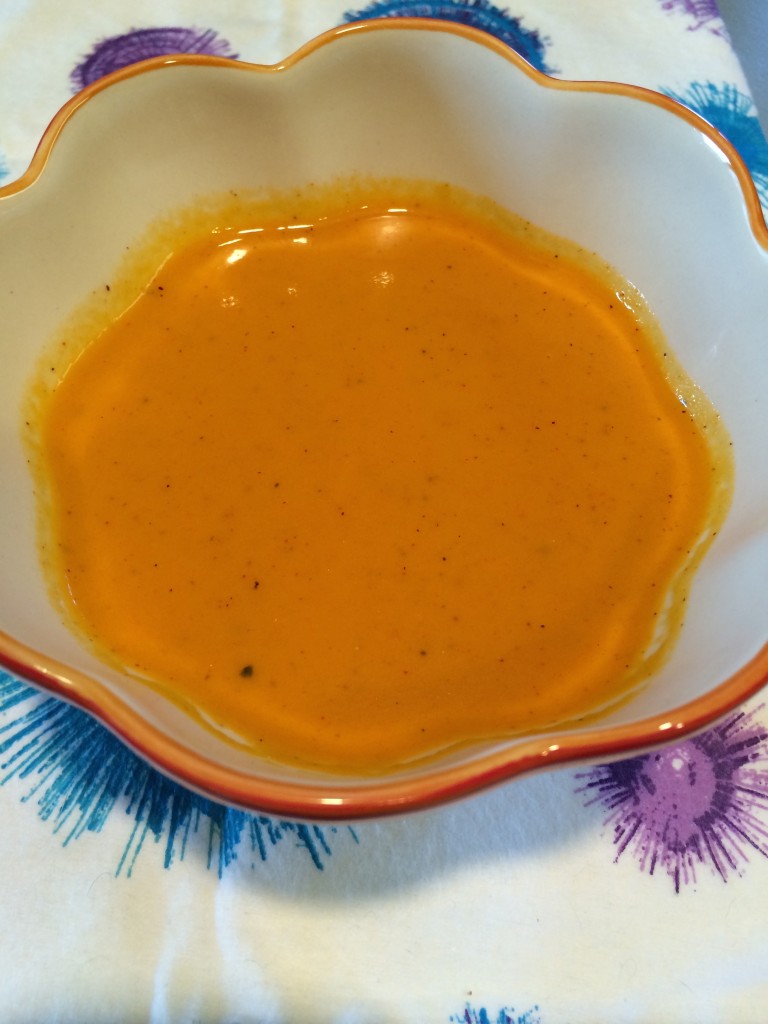 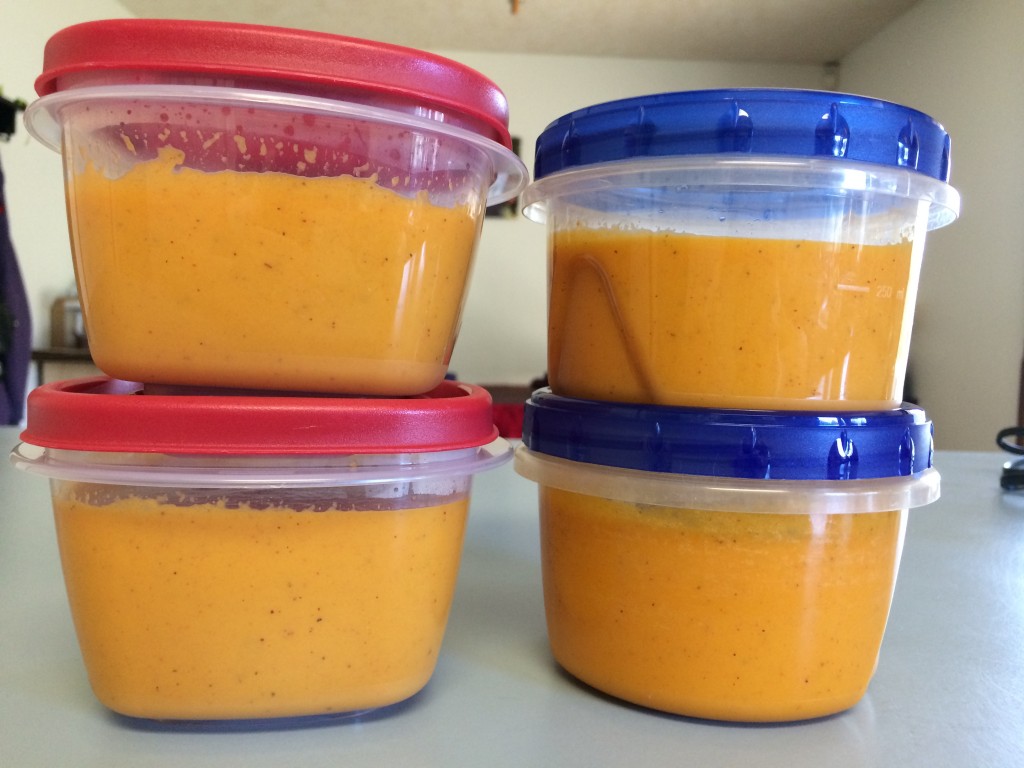 I loved the soup. It was SO CLOSE to the Whole Foods recipe. I’m not sure where it’s different. I need to have the WF version again. I’m sure they used fresh ginger (I used powdered) and they probably used the full fat coconut milk. Maybe those small changes made the difference? I’m not sure but I loved my version. It was tasty and filling, low in calories and spicy!  Yum! Yum! I also had a bunch of leftovers for work lunches. Perfect!

What are your favorite veggie recipes?

I used to do SO WELL eating vegetables. Even when I was 250+ pounds, I still ate veggies. I loved a good salad. Having been in maintenance mode for nearly 6 years now, my diet has evolved a lot and a typical dinner became a steamed vegetable, a protein and a salad. Basically, I got my veggies in!

Well in December of this past year I got lazy. So lazy. And this rolled over into January, too. Our wholesome meals we were used to eating fell by the wayside. Stress, holidays, laziness, depression, being too busy to make an effort….a million reasons for the lack of green in my diet. We were going for easy and lazy dinners. Homemade nachos, pizza from Papa Murphy’s, sandwiches…basically “junk” food that didn’t require much effort or cooking. My body felt it, too. I just didn’t feel great not eating in a healthy way. I was craving vegetables and fresh food. Eating fruit has never been a struggle for me. I usually have a mid-morning snack of an apple or whatever is in season. At least THAT healthy habit didn’t go away in December!

So how can we all eat more vegetables? And no, I don’t think drink more Bloody Mary’s count. But they should…. 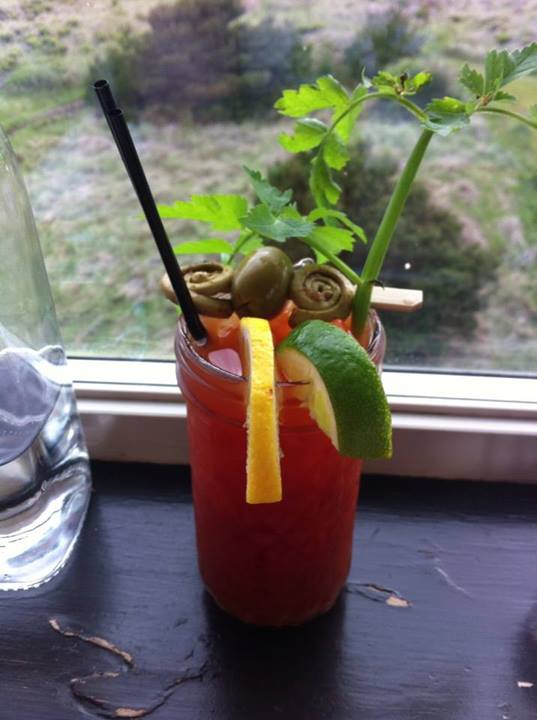 One of the biggest tips I can share is to prep your veggies as soon as you get back from the grocery store. I don’t know about you but if I buy a bag of carrots or celery and just stick in the fridge, I’ll never eat it. I’ll open the fridge craving a snack, take one look at the bag of veggies that needs to be cleaned, peeled and cut up and I’ll choose something else for a snack– like chips or cheese. 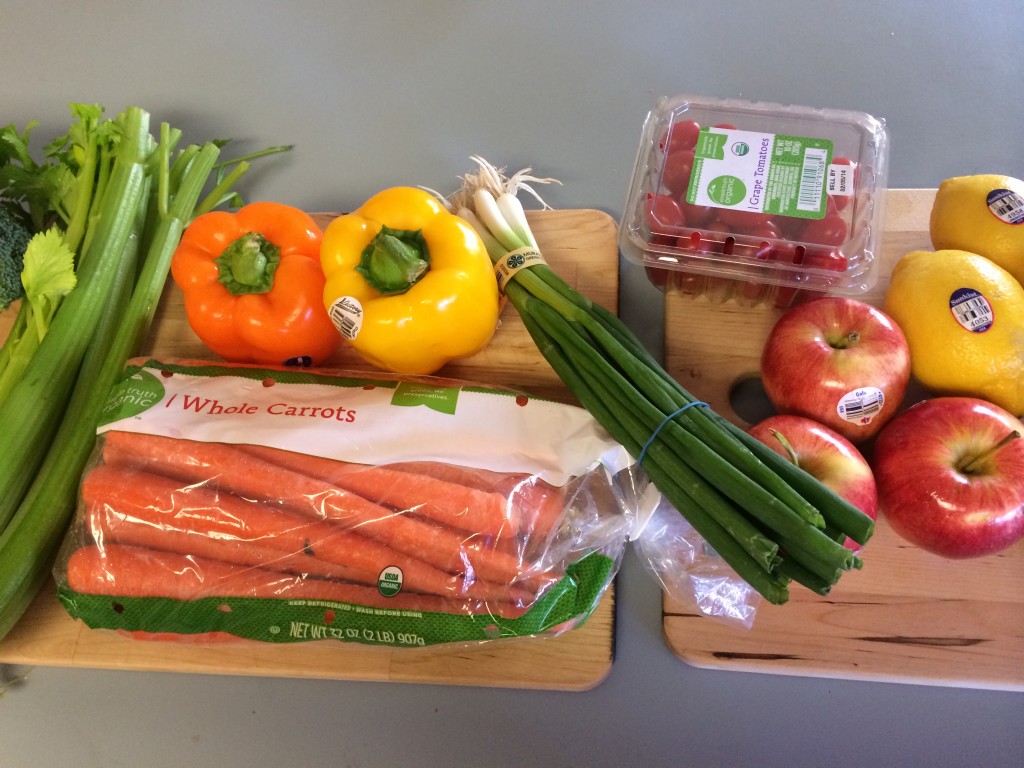 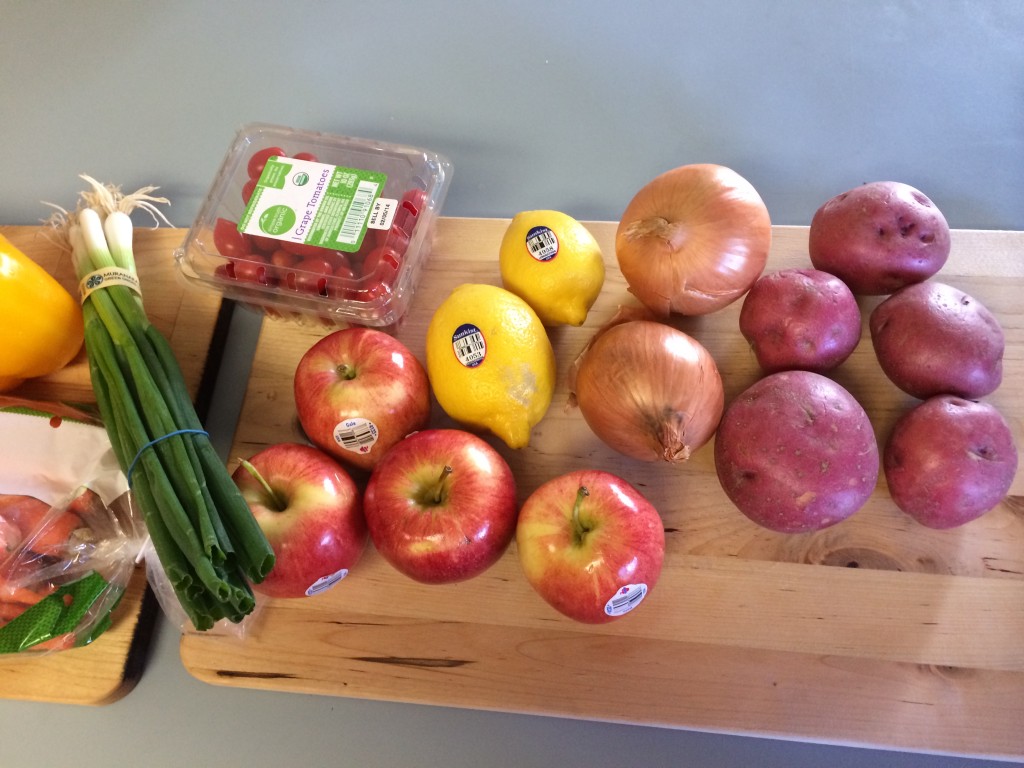 On Sundays I clean and peel and dice and chop. I put the diced green onions in a tupperware, same with the strips of peppers and the celery and carrots. I wash the broccoli or cauliflower and lettuce and let it air dry before putting it away. This has helped me tremendously.

Day One – I had a quickie dinner of Thai noodles but I cooked a can of mixed veggies (carrots, corn, lima beans, okra, peas and green beans) and added that to my ramen. With a little srichacha it was great! Sure it wasn’t as wholesome as I was hoping, but it did the trick.

Day Two – For lunch I had a bratwurst (without the bun) and some spicy ground mustard. Instead of chips I had raw broccoli with ranch dressing instead. Same savory crunch as a chip but healthier. 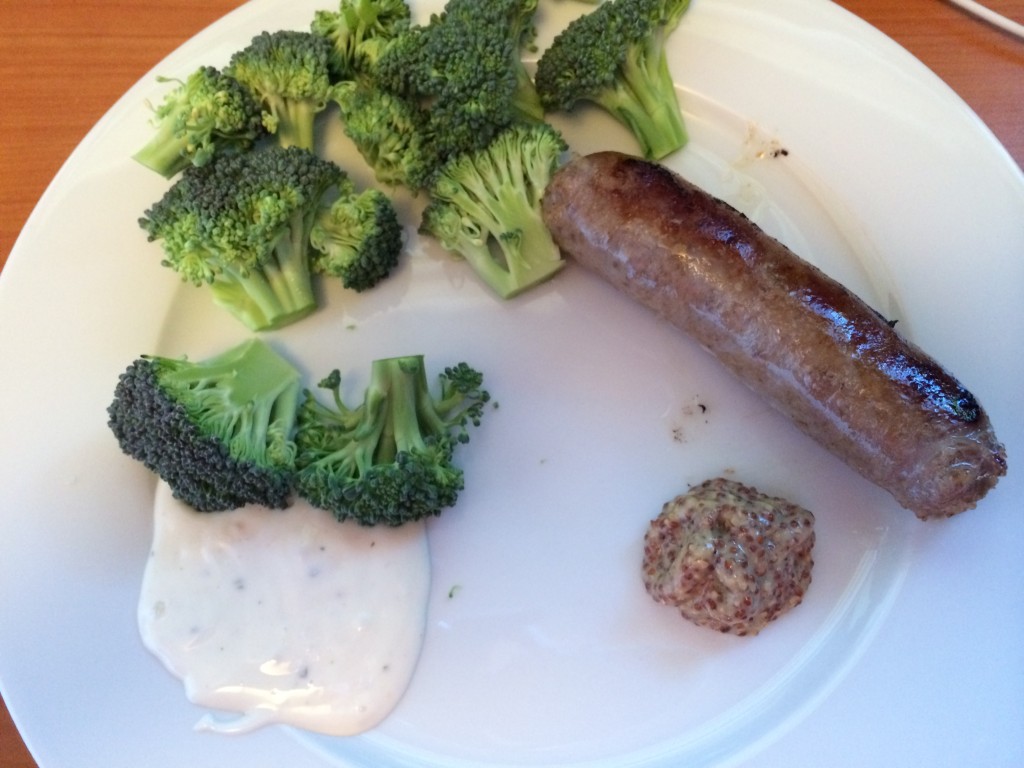 Day Three – For breakfast I was having some egg muffins that I made recently that I packed with veggies. It’s an easy way to get more vegetable in your diet! Quiche, omelet, scramble–add some greens! 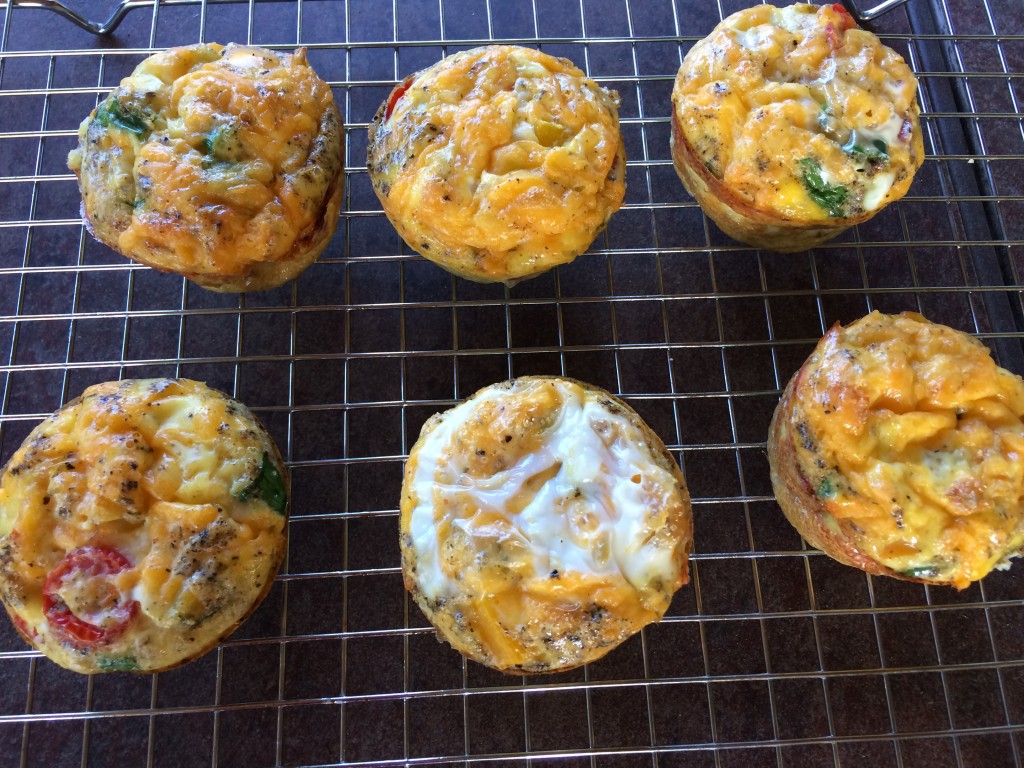 Day Four – I added a green salad to my soup lunch. This was the easiest way to get some greens in on this day.

Day Five – For a snack I skipped the usual apple and had celery and hummus instead. It was around the same calories and I felt good getting in some celery (which is sometimes hard for me to eat).

Day Six – Today for lunch I had the last of the leftovers from that casserole I made over the weekend. It had peas and corn in the casserole. I added a side salad of baby spinach to it for my lunch. My pre-gym snack was some carrots and hummus!

Day Seven –  Another snack of celery and hummus! For dinner I had a big salad and topped it with leftover chicken, orange and yellow peppers, broccoli, diced celery and some cottage cheese on the side. Sometimes dinner just needs to be quick and easy. 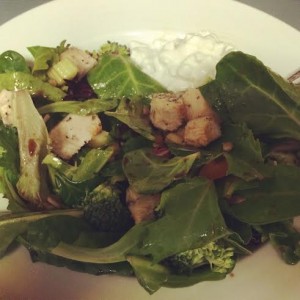 Move your fruit and vegetables out of the fridge drawer and on the top shelf. This is a great tip. Out of sight, out of mind can be a bad thing. If I SEE the veggies out there, I’m reminded I need to eat them before they spoil.

Prep the veggies as soon as you get home from the grocery store. This is a trick I’ve used for awhile and it makes a HUGE difference for me. If I spend 1 hour prepping food on a Sunday, I am more likely to eat those things. But if I just leave a whole bunch of celery, unwashed and uncut, in the fridge, I’ll never eat it. It’s too much effort. (I know, that’s terrible.)

Adding veggies to breakfast is super easy! When I was on a scrambled egg kick I was doing my eggs with broccoli, peppers, or spinach and onions. I loved it! I need to get back into making my veggie scrambles.

Having some raw veggies with hummus or guacamole is a healthier alternative to chips. I’m so-so on this. Sometimes I just crave the salty, crunchy corn tortillas. But I do love raw celery or carrots with hummus.

Add vegetables to spaghetti sauce. This is something I never thought of until a friend told me she always adds carrot to her homemade spaghetti sauce or homemade tomato soup. Her reason? The carrots were a substitute for sugar! How smart! And a great way to get some carrots in the diet. Also, chop up some zucchini and mushrooms to your spaghetti sauce to make it richer.

Make a smoothie. This is something I struggle with. It’s a GREAT way to get the green in your diet but I just don’t crave smoothies in the winter. I make them in the summer time, but….yeah. If it works for you, great.

Remember those sandwiches I was eating for dinner in December when I was feeling lazy? Why didn’t I add some vegetables to that sandwich? Or as a side dish? Adding some peppers to a grilled ham and cheese sounds like a great idea to me!

How do you add more vegetables to your diet?