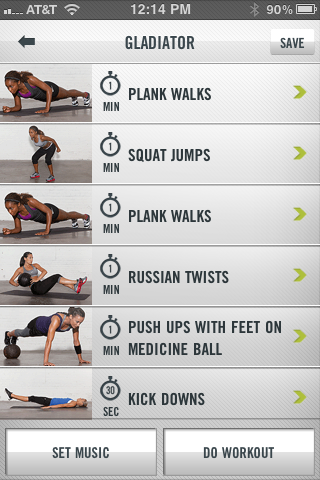 Saturday morning I slept in a bit and then had a lazy morning of starting the show “Damages” and eating half a bagel for breakfast. The idea of getting dressed and going to a possibly over-crowded gym sounded awful to me. I decided that I’d workout from home instead.

Michael worked out first. He got on the trainer and did his normal routine which is about 45 minutes of intervals. While he was on the trainer I got some of my weights and workout gear situated in the living room.

I started my workout 20 minutes into Michael’s workout so that when he was done I could switch out the bikes on the trainer and do my FIRST workout training for the Portland Century. I began my workout on the Ab Ball (not pictured) with 2 sets of 20 crunches. Then I moved to the floor and did the Russian Twist with my 8 pound medicine ball. My abs were burning! I did the Russian Twists differently this time, using the Nike Training Club app (see below).

Recently I mentioned an iPhone app called the Nike Training Club. It’s geared toward women but men can use it just the same. Michael downloaded it to his phone and plans on using it to help him. I checked out the app during my workout. There are sooo many different workout routines I can choose from. I didn’t do any specific workout this time. Instead I just checked out the different options. The app gives instructions and it also has video clips. So easy to use and I think it will be a good tool for my workouts.

I used my 5 pound free weights to incorporate some arms into my routine. I also tried this:

Did I mention that the app is free? Seriously, get it! I did the Sumo Squat with my free weights. I’d squat down holding the weights just like the photo then as I stood up I raised the weights above my head. It felt great. It was a good workout that got my blood pumping.

Something that surprises me is how little upper body strength I seem to have. After months of weight lifting, finally seeing the results in my body, I still struggle with push-ups. I could not do the below exercise. I did try a different one that was similar: Push-up then a leap forward into the “frog” position, then back in push-up position. It was a good one too.

During my weight session I burned 187 calories in 29 minutes:

Michael finished up his workout on the bike. I pumped my tires and he showed me how to put my bike on the trainer. My goal is to do the bike once a week in January and increase that as the year progresses. I am determined to train properly for the Century.  I hopped on the bike and turned on NCIS to watch while I worked out.

The one thing missing from this setup is a convenient place to put my phone and the remote control for the TV. We use the back of a chair for that but it doesn’t work well. I wonder if there’s some sort of tray that I can attach to the handlebars of the bike temporarily?

For my gear I wore my Pearl Izumi padded bike shorts then put my new compression tights on over it. Supposedly it will assist in my legs healing faster. Michael says when he wears his compression tights cycling he’s less sore the next day. I look forward to testing this theory.

It’s been probably 6 months since I was last on the bike. I rode my bike at the beginning of August with Michael and then I switched to all of my workouts being about RUNNING and Hood to Coast. After my injury I never even thought about switching to the bike while I rehabbed. I’m glad I got back on the bike. It’s been too long. I did about 40 minutes on the bike with a slow 5 minute cool down (basically the length of the TV show I was watching). I think it was a good start. I didn’t push myself too much because I’m still not sure how my ITB syndrome will react with cycling. My hope is that I don’t have knee pain.

My knee bugged me a little bit while I was on the bike, but it wasn’t painful and I didn’t need to stop. I will take it slowly for the next few weeks.

I was kind of cranky about working out at home. I felt like I was wasting my time and not going to get a good workout to justify the amount of time I spent doing it. Even though I’ve been burned out with the gym lately, I begrudgingly forced myself to just DO IT.  The verdict: I got in a decent workout despite my prejudice against “home gym” concepts. I think I am still the type of person that needs to have a gym to go to but it was nice not having to battle traffic, parking, other people…