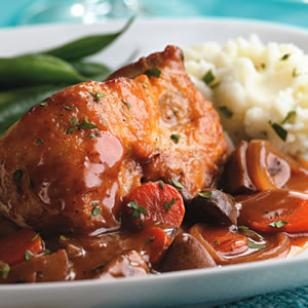 Here’s a quick version of Coq au Vin, a red wine-braised chicken-and-vegetable stew that usually takes the better part of an afternoon to make. Serve with herbed mashed potatoes and green beans.

Like Wow. This recipe was amazing. It was the recipe I’d been eluding to all week in my complaining about meal planning. I bought the chicken over the weekend with the intent of making this recipe because it sounded so good. Then once I got the chicken and skimmed the directions I just groaned…I procrastinated because I thought it was complicated and time consuming. It really wasn’t. I’m glad I decided to suck it up and just MAKE it!

I was sure to get the chicken breasts with the bone in it still. To be honest I was really skeeved out about that. Michael and I are both ex-vegetarians. Neither of us are fans of eating meat on a bone (ribs, T-bone steak, etc). In fact we usually choose cuts of meat that are boneless to avoid the whole thing. I wanted to follow the recipe to a T so I got the bone-in chicken. It was really gross touching it, peeling the skin off and cutting through the bone to cut the chicken in half. Oh well. If I’m going to eat meat I have to be able to do this stuff, right?

While I prepped the chicken Michael chopped the onions and carrots.

I also measured out all the liquids to make sure I was prepared before we started cooking.

Michael browned the chicken in the skillet and then took the chicken out to cook the vegetables.

After the vegetables were softened and lightly browning I added the liquids to the skillet and the tomato paste.

Then added the chicken to it. Let it simmer, covered until the chicken was the right temperature. While it was cooking (maybe 10-15 minutes?) I made us salads: baby spinach, 1/2 a serving of Craisins, broccoli, oil and balsamic.

Michael added the water/flour mixture to the skillet. Supposedly that would thicken up the sauce but it didn’t really do that. I was starting to have doubts about the recipe and whether or not dinner would be a total fail. I also realized that the recipe suggested it be served with mashed potatoes (I only had 1 sweet potato in the house–not really the same thing). I started to feel bummed that we’d spent so much time on it and it wasn’t going to be good. Boy was I wrong.

The above photo is what it SHOULD have looked like…a nice thick glaze and sauce. Looks amazing right? Mine didn’t quite look like that but believe me, it tasted great.

It was more brothy than thick but it tasted wonderful. The wine and the cooked vegetables were amazing. I really did love the broth. Next time I make this I’ll add a little more flour to hopefully thicken up the stew part but the recipe was still great.

The chicken? Michael took one bite and said to me, “This it the best chicken we’ve ever made.” I hadn’t had a bite yet so I quickly did to see if I agreed. I did. It was THE best chicken we’ve done, second would be this one. The meat was soft and tender, not dry in any way, and the broth was so flavorful. I finished eating and despite being full I wanted seconds. I didn’t have seconds, but boy did I want some….

I wonder if the recipe really needs bone-in chicken or can I use boneless chicken breasts?

QUESTION: Have you ever made this recipe the traditional way? How did it turn out?

There’s a News Van in My Driveway