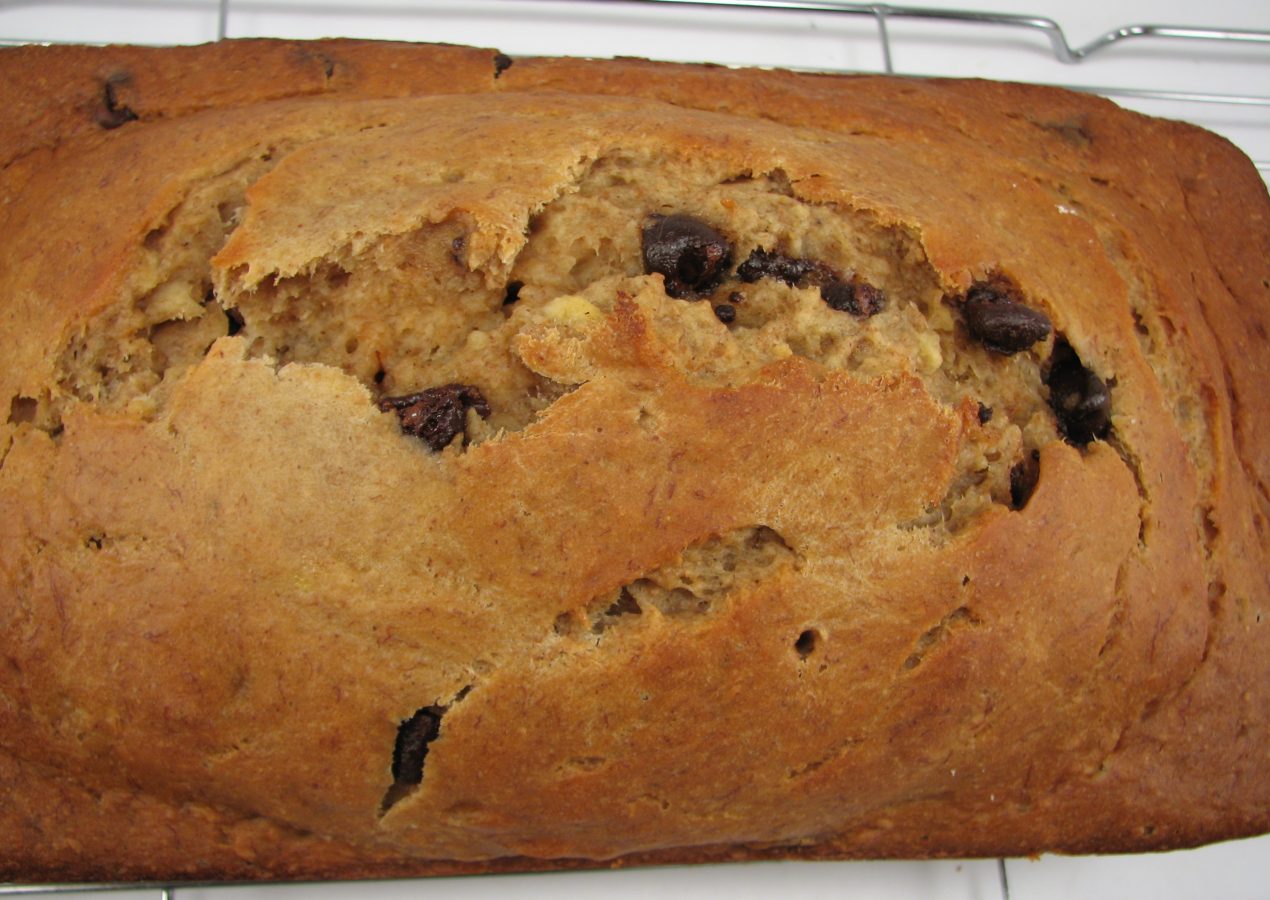 A few days ago when I borrowed Michael’s car to commute to work (his car has a bike rack)  I sent him this text: “Why does your car smell like bananas?” He had no idea and it was a very strong smell. Neither of us could figure it out. Then on the drive home I discovered a bag of bananas. Ooops…they were the ones I’d bought the week before and forgot about. They were clearly not going to be eaten by me so I decided to make some banana bread with them. I consulted Twitter for the best banana bread recipe and Brittany from Eating Bird Food sent me her recipe.

Place sugar and butter in a large bowl, and beat with a mixer at medium speed until well blended (about 1 minute). Add the eggs, 1 at a time, beating well after each addition. Add banana, yogurt, and vanilla; beat until blended. Add flour mixture; beat at low speed just until moist. Spoon batter into an 8 1/2 x 4 1/2-inch loaf pan coated with cooking spray.

Bake at 350° for 1 hour or until a wooden tooth pick inserted in center comes out clean. Cool 10 minutes in pan on a wire rack; remove from pan. Cool completely on wire rack.

Thankfully I’d just bought some Greek yogurt at the grocery store. I’m not sure what I could have substituted for the yogurt had I not had it on hand. I decided to use the Splenda Blend that I have instead of sugar. I bought the bag specifically for baking in an attempt to make recipes a little lower in sugar/calories…then I stopped baking for a long time. I recently re-found the Splenda in my cupboard and have been using it instead of straight sugar for various things. I decided to give it a try with this recipe.

The recipe called for 1 cup of sugar, so I used 1/2 a cup of the Splenda Blend.

This was the first time I’ve ever used our Mixer on my own. I had lots of plans with experimenting with the mixer and just never got around to it. Michael wasn’t home either, so I had to figure it out myself. And boy, is a Mixer an AWESOME thing?? The process of baking was suddenly a million times easier.

I used a blend of Whole Wheat flour and Bob’s Red Mill white flour. I also added a tiny bit of nutmeg to the mix.

The Mixer made things so easy that there really wasn’t a whole lot for me to do once I added all the ingredients. Next were the very mushy bananas.

Once everything was mixed well, I added a handful of chocolate chips. It wasn’t part of the recipe but I love chocolate chip banana bread. I figured that substituting the Splenda Blend meant I could add a few chocolate morsels…

The whole house smelled so good! Michael got home and said something smelled wonderful. I wondered if he’d even want any of it because he’s not a fan of bananas. But he said that since it smelled so good he’d have to have a piece. And he LOVED it!

After it cooled for a few minutes I sliced off two pieces for us to “sample”–just to make sure it was edible. 😉

The banana bread was delicious, and even better warm with a little bit of butter on it. I normally don’t like nuts in my baked goods but I think adding a layer of chopped walnuts to the top of the dough before baking would be really yummy. And more chocolate chips!

It’s a little higher in calories than I’d prefer but the recipe was delicious. Next time if I have bananas I need to use up I’ll look for a Weight Watcher’s recipe that’s less than this was in calories. I’d also love to find a recipe that I can add some sort of protein too…any ideas?

Is it Christmas? Presents For Me?!