I wish I could somehow bottle up what my house smells like after making these and share them with you.

I’ve had this recipe saved on my phone for a year. I’d planned on baking them last Halloween and never got around to it for some reason. I’m not sure why because it’s a pretty great recipe. 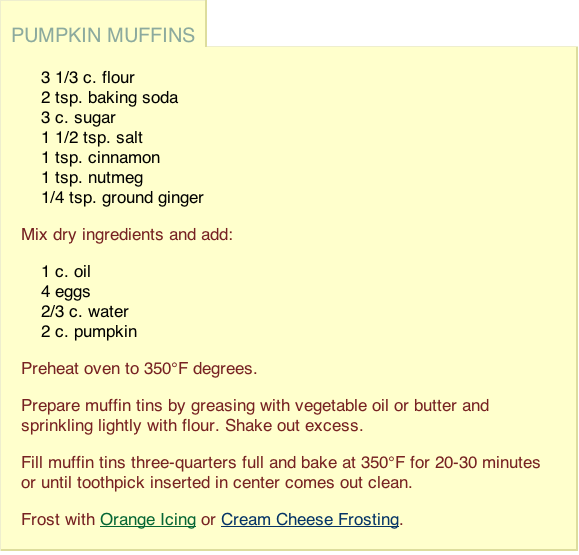 Simple, huh? I decided it was time to try this baby out. I did make a few variations of it. First, 3 cups of sugar was just too much for me to take. So instead of 3 cups of sugar I did 2 cups of sugar and 1/2 a cup of a Splenda mix. 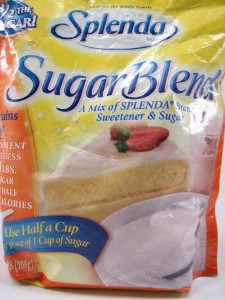 I normally don’t change recipes before I try them out at least once–how are you going to know what to change, right? But with baking I can usually figure out additions easily. I used to bake A LOT as a big ol’ chubby girl living alone. Even if a baked goodie was a failure I’d still eat it… 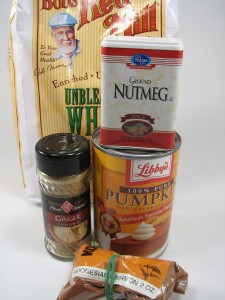 I mixed all the dry ingredients together in my mixer and then added the eggs, oil, water, pumpkin, etc. Back in the day when I did a ton of baking I did everything by hand. If a recipe called for the batter to be hand whipped for 5 minutes I did it. Having a mixer is such a different experience. It takes all the work out of it, honestly. All I do is measure. 😛 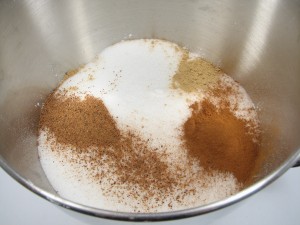 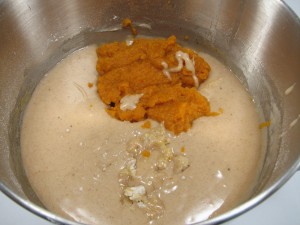 I let the mixer do my work for me and blend everything together. It smelled magnificent–like Halloween and Thanksgiving Day! 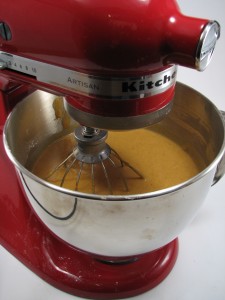 I used the small measuring cup to scoop the batter into the Halloween cupcake cups and then popped them in the oven. While they were baking I perused the comments on the recipe website. Lots of people said it was too sweet, that they reduced the amount of sugar in the muffins (glad I did!).

“This made such a large batch of mix. I made cake instead and frosted it with cream cheese frosting. Amazing!!!!”

“I modified quite a bit: Used buttermilk in place of water (plus 1/2 tsp. baking powder), 2 cups agave nectar instead of sugar (added to wet ingredients), and folded in crystallized ginger, golden and dark raisins, and dried cranberries (total about 1 1/4 cups).”

I realized after I made the batter that this recipe makes an insane amount of muffins! Apparently over 30? Had I known that beforehand I would have made a half batch. So instead of just making 30 muffins, I made about 18 and then put the rest of the batter into a loaf pan. 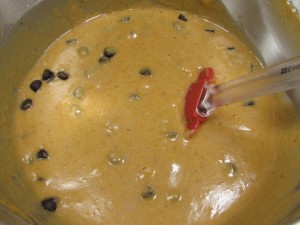 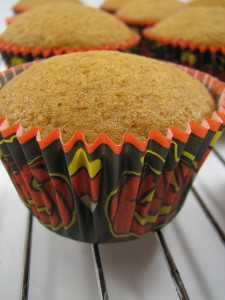 I’m so happy I was able to finally use my Halloween baking cups! 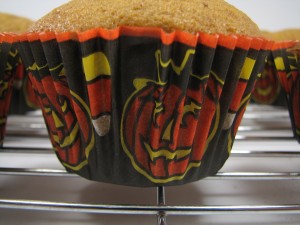 Mmmm pumpkin! I took the lazy route and used store-bought frosting. I really wanted to make homemade cream cheese frosting but was lacking the motivation after spending a few hours baking. 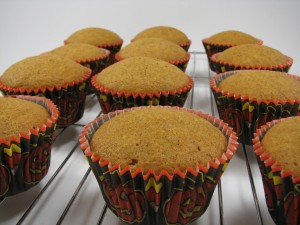 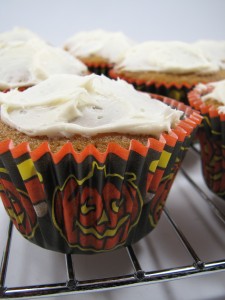 I used a vanilla frosting (store bought) and used it sparingly. 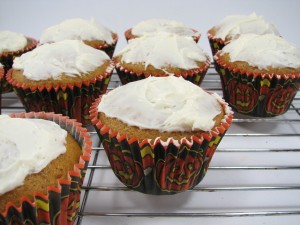 The pumpkin bread from the loaf pan went straight into the freezer for another day. So how many calories are in these cupcakes? Over 220 if you use the full sugar. If you don’t it’s a little less: 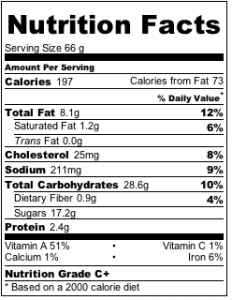 It’s not the healthiest treat to have (that pumpkin is deceptive!) but just one is enough honestly.

A few days ago when I borrowed Michael’s car to commute to work (his car has a bike rack)  I sent him this text: “Why does your car smell like bananas?” He had no idea and it was a very strong smell. Neither of us could figure it out. Then on the drive home I discovered a bag of bananas. Ooops…they were the ones I’d bought the week before and forgot about. They were clearly not going to be eaten by me so I decided to make some banana bread with them. I consulted Twitter for the best banana bread recipe and Brittany from Eating Bird Food sent me her recipe.

Place sugar and butter in a large bowl, and beat with a mixer at medium speed until well blended (about 1 minute). Add the eggs, 1 at a time, beating well after each addition. Add banana, yogurt, and vanilla; beat until blended. Add flour mixture; beat at low speed just until moist. Spoon batter into an 8 1/2 x 4 1/2-inch loaf pan coated with cooking spray.

Bake at 350° for 1 hour or until a wooden tooth pick inserted in center comes out clean. Cool 10 minutes in pan on a wire rack; remove from pan. Cool completely on wire rack. 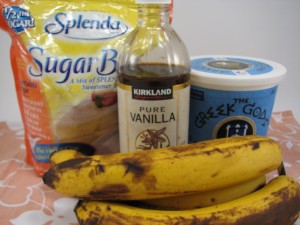 Thankfully I’d just bought some Greek yogurt at the grocery store. I’m not sure what I could have substituted for the yogurt had I not had it on hand. I decided to use the Splenda Blend that I have instead of sugar. I bought the bag specifically for baking in an attempt to make recipes a little lower in sugar/calories…then I stopped baking for a long time. I recently re-found the Splenda in my cupboard and have been using it instead of straight sugar for various things. I decided to give it a try with this recipe. 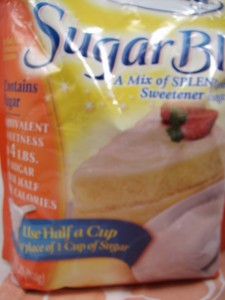 The recipe called for 1 cup of sugar, so I used 1/2 a cup of the Splenda Blend. 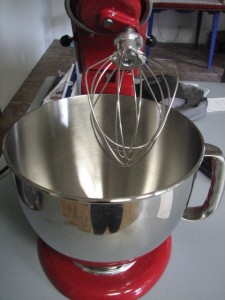 This was the first time I’ve ever used our Mixer on my own. I had lots of plans with experimenting with the mixer and just never got around to it. Michael wasn’t home either, so I had to figure it out myself. And boy, is a Mixer an AWESOME thing?? The process of baking was suddenly a million times easier. 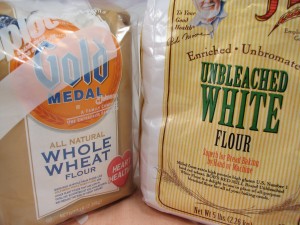 I used a blend of Whole Wheat flour and Bob’s Red Mill white flour. I also added a tiny bit of nutmeg to the mix. 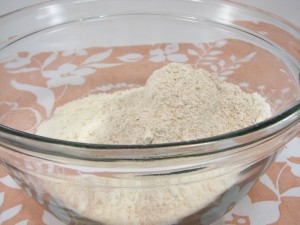 The Mixer made things so easy that there really wasn’t a whole lot for me to do once I added all the ingredients. Next were the very mushy bananas. 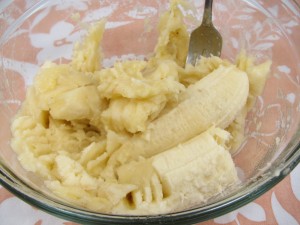 Once everything was mixed well, I added a handful of chocolate chips. It wasn’t part of the recipe but I love chocolate chip banana bread. I figured that substituting the Splenda Blend meant I could add a few chocolate morsels… 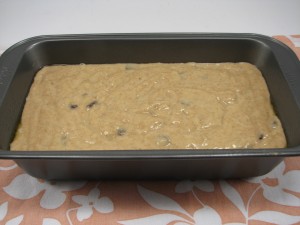 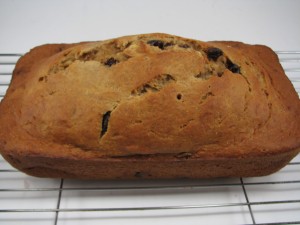 The whole house smelled so good! Michael got home and said something smelled wonderful. I wondered if he’d even want any of it because he’s not a fan of bananas. But he said that since it smelled so good he’d have to have a piece. And he LOVED it! 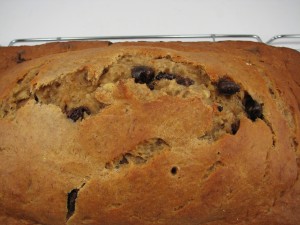 After it cooled for a few minutes I sliced off two pieces for us to “sample”–just to make sure it was edible. 😉 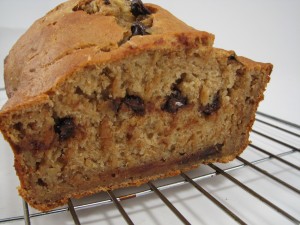 The banana bread was delicious, and even better warm with a little bit of butter on it. I normally don’t like nuts in my baked goods but I think adding a layer of chopped walnuts to the top of the dough before baking would be really yummy. And more chocolate chips! 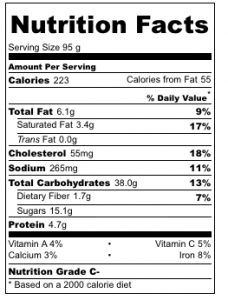 It’s a little higher in calories than I’d prefer but the recipe was delicious. Next time if I have bananas I need to use up I’ll look for a Weight Watcher’s recipe that’s less than this was in calories. I’d also love to find a recipe that I can add some sort of protein too…any ideas?