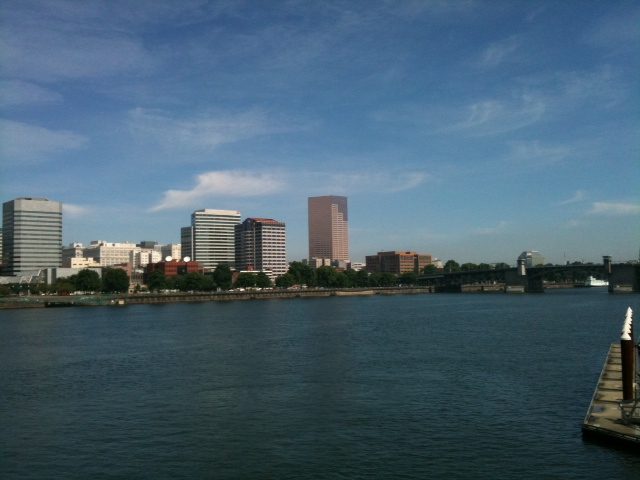 Wednesday morning I woke up ready to commute to work by bike. I learned very quickly that I need to figure out a new system of transporting my stuff to work on days I bike. My backpack was WAY too heavy! It had my lunch, my clothes and shoes to change into. It was annoyingly heavy and not comfortable. Lesson Learned.

Not only that, I was eating the wind the entire ride downtown. I rode down passed Oaks Park and there was hardly anyone on the trail. I was surprised because it was such a nice day.

My legs felt okay considering I was still a tad sore from Monday’s strenuous hike. I was also glad that the detour has been fixed. The trail is now open again around OMSI. They built a small footbridge over the construction to re-open the path.

The rest of the ride over the Hawthorne Bridge was uneventful and easy (although the wind made it difficult). I think most people are still on vacation because it was not crowded.

The day was gorgeous. When I left the house it was 60 degrees but I warmed up immediately. The jacket I wore was TOO HOT. I need to figure out an alternative. Lesson Learned.

The path I normally take off the Hawthorne was closed due to last weekend’s Blues Festival so I had to take an alternate route. No worries, it meant I got to enjoy the fountain!

The morning commute was quiet, fairly easy and hot. But I survived and I did not fall. 🙂

The lesson I learned from my last commute on the bike: TAKE IT SLOW. Especially in the afternoon. Traffic is worse, and I need to not get frazzled and make stupid mistakes. Lesson Learned.

I decided to try going home a slightly different way. I rode down to the waterfront and took the Esplanade in the opposite direction to cross over the Steel Bridge. Going this route added almost 2 miles to my commute, but that was good because I was in a mood to ride longer.

I’d never ridden across the Steel Bridge on my commute before. It was a VERY windy ride! I’m not sure if it’s always that way or yesterday was the exception. It was terrifying how windy it was. I felt like I was going to be blown into the water!

I got to the east side and easily rode to the Springwater Trail from there. I was glad I avoided the congestion around the Hawthorne Bridge.

It was a really gorgeous day–87 degrees by the time I left work. I was glad I had also learned from my morning mistake and left almost everything at work! My backpack was super light! Much better! I’m also going to leave a pair of shoes at the office from now on so I don’t have to pack those ever. Lesson Learned.

I was wearing my sleeveless biking jersey and it felt really nice in the sun (yes I remembered sunscreen too). I stopped a few times to drink some of my G2 (I needed it on that hot day) and then continued on.

Everything went smoothly. I wasn’t in a hurry and took my time and that meant I had no incidents like last time. The ride through Sellwood traffic also went much better and I arrived back at the car safe and sound and feeling much more confident.

Not only was it a good ride home that made me happy, I realized it’s time to lengthen the ride. It’s just too short!

Portland Century Update: Training is spotty right now. I need to be more consistent about riding and my goal starting next week is to commute twice a week no matter what. I hope I can do it. I need to be biking 100 miles a week by mid-August in order to successfully do the Century. As it stands this week I’ve done a total of 50.85 miles.

QUESTION: What lessons have you learned lately?

What I’ve Been Up To

How to Lose Weight – Week Five

What IS Your Happy Weight?