First, an update on Fat Kitty: he’s doing so much better! I got home on Thursday night and he was sitting in the window waiting for me and ran to me when I came inside. He meowed, ate a bit and was running around like a crazy cat. I’d say he’s back to normal! Here’s more evidence: 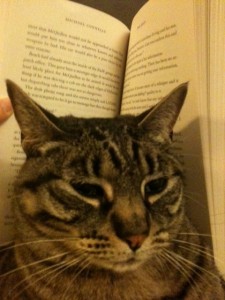 I’m so glad he’s feeling better. Whatever his funk was, it seems to be improving. On Wednesday I had the chance to go the spin class with the awesome teacher again.  I also got to wear my NEW heart rate monitor to try it out in class. 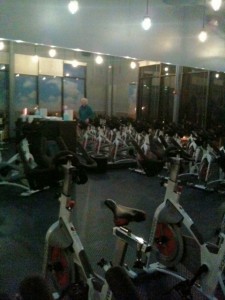 This class was intervals, but mainly intervals in the saddle. We did a warm-up sprint and then did 2-minute intervals at a “6/10 climb”. 2 minute intervals are hard! She mixed in some standing climbs, which I like a lot more. 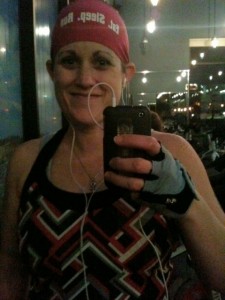 The class was challenging but at the same time I struggled to keep my heart rate in my zone during the entire class. Other routines have been easier for that. As a result, I don’t think I burned as many calories as I should have.

When I was going to the class without my heart rate monitor, I was estimating the calories at about 500 for the hour long class. This was based on my bike commutes to work that took about an hour as well as internet research. I thought 500 was a safe number. When I got my heart rate monitor back, I realized I was a little off in my calculations. I over-calculated the elliptical but under-calculated weight lifting so it ended up evening out in the end. 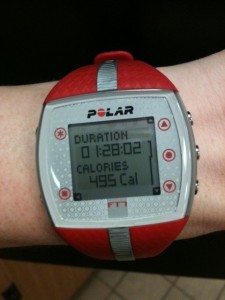 It’s actually a little less than 500. I did some weight lifting before the class and burned 75 calories, so the class itself only burned about 420. A little lower than I thought. I’m sure some of the more challenging classes burn more but it’s not bad for an hour or so.

I’m not discouraged by the lower calories. I think the spin class is beneficial for my winter fitness and preparing me for cycling season in the spring. I want to start sooner than I did last year and I think Spin is the way to do it. Because of this, I’m okay with not burning a “huge” number like a normal gym session: 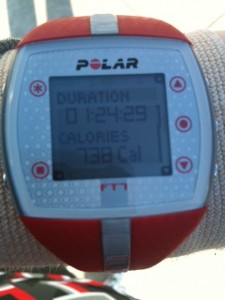 See the difference? The above was Tuesday’s workout (elliptical and weight lifting). Same amount of time but I burned more calories. Oh well. It’s all about the final product.

QUESTION: If you find out an activity doesn’t burn as many calories, do you do that activity less?