I recently finished a fantastic book that I wanted to share with you guys. It was “The Dirty Life: On Farming, Food and Love” by Kristin Kimball.

The book is a memoir by Kristin Kimball, a 30-something New Yorker reminiscent of Carrie Bradshaw–complete with shallow relationships, couture and New York life. She was a writer who was going to interview a farmer in Amish country (he was not Amish) who was running a farm the old-fashioned way. They fell in love and she left New York to follow him to a rural farm to help him build it up from the ground floor. Literally. 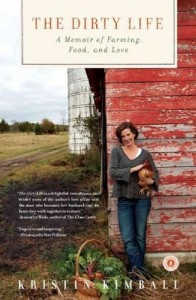 It was a rude awakening for her. She says, “There’s no better cure for snobbiness than a good ass-kicking.” And her ass was kicked. They buy a few cows, some chickens and horses and start building the farm up. Of course there are many set backs and she has no idea what she’s doing, but she learns it along the way.

“Food, a French man told me once, is the first wealth. Grow it right, and you feel insanely rich, no matter what you own.”

They finally figure it out and get some rhythm to their lives. It’s in no way easy. Crops die. Animals die. They are more tired than they’ve ever been because you know what? Hard, manual labor kicks your ass no matter how young or in shape you may be. Especially when you’re doing it the old-fashioned way (plowing the fields with horses and not machines).

“‎A farm is a manipulative creature. There is no such thing as finished. Work comes in a stream and has no end. There are only the things that must be done now and things that can be done later. The threat the farm has got on you, the one that keeps you running from can until can’t, is this: do it now, or some living thing will wilt or suffer or die. Its blackmail, really.”

The realities of farm living was sometimes difficult for me to read. I was a vegetarian for 12 years and only recently started eating meat again a few years ago. Despite the fact that I eat meat now, that doesn’t mean it’s EASY for me to know WHERE my food is coming from. And honestly? It’s important that we do know where our food is coming from. It’s so easy to disconnect and just think “food comes from the grocery store” not “this used to be a living creature.” I really struggle with that, and usually choose denial instead. I just can’t deal with the idea of it. That’s my issue. So, there were parts of the book that discussed slaughtering and I skipped those parts because they made my heart hurt.

Part of the book was about their crops. They were going to do a CSA-based farm. CSA is “Community Supported Agriculture” where consumers buy local produce directly from the farmer. The consumers “buy in” a share (membership) of the farm and receive weekly boxes of the produce. It could be anything, really, and from the bloggers I’ve seen that do CSA deliveries it’s often things they have no idea about! The benefits are great for both consumer and farmer: the farmer gets some income to keep the farm running and the consumer gets fresh produce.

In this book, they wanted to do something a little different. They wanted to provide a complete diet in their CSA–they included their homemade milk, butter, butchered meats and fish, in addition to the fruits and veggies, wheat and grains. I think it was a brilliant idea and I wished I could participate in something like that. 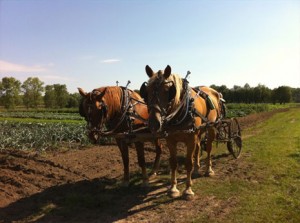 I remember the hard work my TINY vegetable garden took last summer and cannot imagine running a farm. It’s definitely a full-time job. The book was good and I enjoyed reading it. I recommend it to anyone who is interested in farming, where their food comes from, and memoirs. Read this!

QUESTION: Have you read this book? Do you participate in CSA models?

4 thoughts on “The Dirty Life”