Somewhere around the end of August I started seeing the tweets and facebook comments and blog posts…”Is it PUMPKIN LATTE SEASON YET?” I think what we need is an illustration about the phenomenon by the very talented Shelby, don’t you? I have to admit, I don’t get it. I don’t understand the hype, I don’t understand why the frenzy starts so early and why everyone is just so obsessed about pumpkin everything!

Don’t get me wrong. I love pumpkin. Pumpkin pie is one of my favorites (and kind of my kryptonite). Last year I made an amazing pumpkin bread that was homey and delicious and I will most definitely be making it again this year. But those pumpkin spice coffee drinks just don’t appeal to me. I was intrigued, at first, because of all the excitement about it. I decided I want to give it a try. Not to be a downer or anything, but then I looked up the calorie count of one of those babies and it totally turned me off. Depending on where you go and what size you get, a pumpkin spice latte runs between 250-500 calories. OH! So that’s why everyone likes them! They are dessert! Dessert drinks used to be my specialty! I loved those white chocolate mochas with caramel sauce, chocolate syrup and whipped cream. I’ll admit, I’m still curious and would like to try one but I just can’t justify spending 400 calories on a drink.

I found a much better option. Check out this girl’s recipe for a homemade pumpkin spice latte. It’s less than 100 calories total. Now THAT’S something I’d give a try…but haven’t yet because it takes two hours. Someone let me know how it is. 🙂

Since it’s squash season and I love everything squash or pumpkin, I decided to give something else a try.

This recipe was a bit on the complicated side, but don’t let that stop you from trying it. Just plan ahead and expect to spend a lot of time making the elements. OR use leftovers to stuff the squash. If you have leftover rice already cooked, I would use that for the mixture. Quinoa would be a good substitute, too. 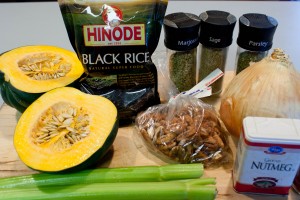 I used Black Rice. When I went to the store to get the last few ingredients I needed, I didn’t see wild rice in my store but the black rice was on sale. I’ve never had it before so I thought I’d give it a try. It was kind of strange watching it cook because it turned the water purple and then black. I was excited to try something new. 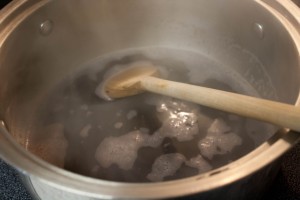 I made a few minor changes, like the black rice instead of wild. I also used pineapple sage because that was the kind of sage I had in our garden. Michael also wanted to add some protein to the dish, so we cooked up some chicken breasts. I ended up having half of a boneless chicken breast because honestly, the squash was enough food for me. 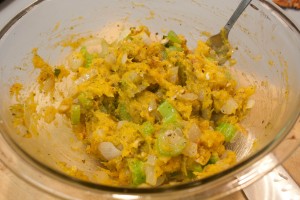 I mixed everything together in a bowl. It was a big mess but it tasted GREAT. You know your recipe is a good one when you’re snacking on it while you cook and it tastes delicious.

While the final product baked in the oven, Michael cooked the chicken in a skillet with just salt and pepper. And we debated on whether I bought pecans or walnuts. I’m 99% sure I got pecans. He was skeptical. I stand by that 99%! 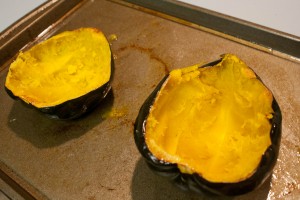 I had a bunch of leftovers after stuffing the squash so I saved it have for lunch later in the week. My final product was not so photogenic. You should check out the original recipe to see something pretty. 🙂 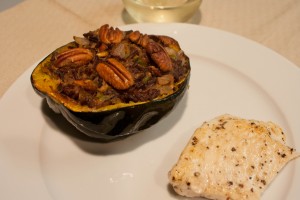 While it wasn’t pretty looking, it was delicious tasting. I absolutely loved it. Michael liked it a lot. He said it could have used a little more salt and I agreed. I loved the nutty flavor of the pecans and the black rice with the sweetness of the squash. The celery and onions had a nice crunch to them and all of the flavors went really well together. I think next time I’ll chop up the chicken breast into small pieces and just mix it into the squash. 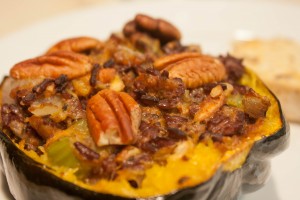 I was glad that I hadn’t ground up the pecans and instead had roughly chopped them but kept them kind of large before I mixed it into the rice. It was delightful getting a crunchy piece of nut in a bite of squash and rice. Definitely give this recipe a try! I thoroughly enjoyed it and look forward to making it again.

QUESTION: Are you a pumpkin latte fan? Have you ever made stuffed squash?